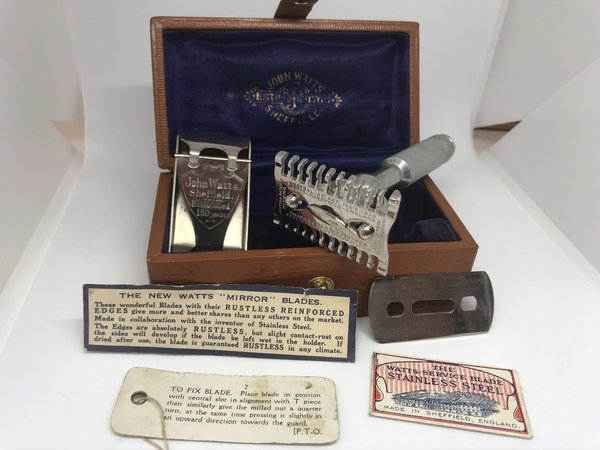 The following is the back story of this interesting DE razor, as far as I have been able to gather information on the internet.

The John Watts Cutlery Works in Sheffield, UK - almost 300 years of history
The company was originally founded in Sheffield, the great home of UK heyday razor production, and stayed there for its full 236 year history. It was founded in West Bar Green by Michael Shaw in 1765, who manufactured clog clasps and dog collars. After 1833 it was run by Brian Bates, who was related to the Shaw family by marriage. John Watts became a partner in the company in the 1850s, however, Bates dissolved the partnership in 1862 and moved to Buxton later becoming a successful hotelier. This left the company in John Watts’ capable hands, and during the next twenty years he expanded the company from its home in Lambert Street.

His son, also called John Watts, developed the manufacturing range and in addition to making clasps, graining combs and ice skates, they added pen and pocket knives and razors, the latter started around 1915. They were also metal stampers and piercers. John Watts Ltd. was in business until 1999, and by 2007 factory the building had been converted into flats.

The razor
This New Service model was patented and released in England in 1929 and patented in the US in 1931. It's an adjustable razor that uses standard DE blades (...or so I thought). There are 2 tributes which stand out: The option to adjust the angle of the head and the lack of topcap. Instead of a topcap the blade is secured with a simple folding clasp.

To fit a standard blade, it turns out, takes a little adjusting as the studs are about 0.5mm wider apart.

What a beautiful museum piece with a thorough documentation, thank you very much.

Would you also like to take a picture in the length so that the whole handle is visible.

Here you go, King, one of the seller pics. I think the handle is aluminum, the whole razor weighs in at 45 grams. 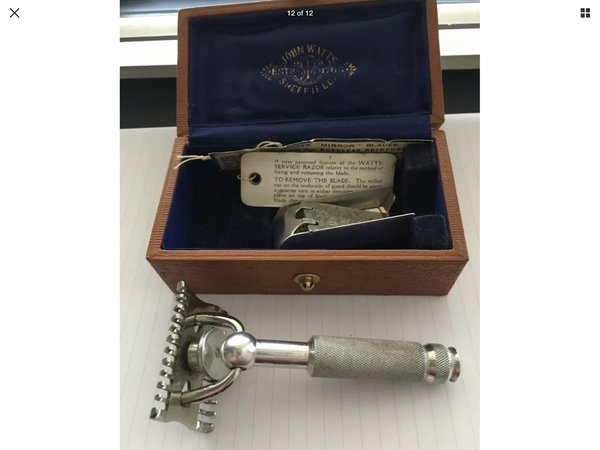 Moderator
Damn Peter ... You get the cooledest stuff. Yet another terriffic razor begging to be on my wantlst.Complex head, I like that.
An’ I don’t need no safety razor, neither.

Aluminum handle! That's a deal breaker for me.

I'll wait for them to release a titanium version.