Anyone know this razor?

I find this razor on one auction site. Photo is really bad but seller says that one side of the tang is marked with "Ship wheel" and other side is marked with letters like "blucd dumcnzel" where letter "c" is write inversely and letter "l" is somewhat strange.

I have seen some Russian Naval officers' razors with a similar grind. Perhaps that is the wheel emblem stamp.I have a Wapienica, Medical, razor with a similar grind. It would be good to have the seller draw the characters for you and send as a picture or a PDF. The type face may be Cyrillic/ Russian.
Good Luck!
~Richard

Did you have oportunity to use above razors and maybe if you know who was producing them?

The Wapienica is just the Polish name for a medical razor. They were mass produced in most of the East block countries during and after WWII. Usually of a really good grade of stainless steel. Not easy to hone but great shavers.Stainless steel is tough and resists abrasion.
I did find this (edit: a brand with a ship's wheel

I always thought that Wapienica is a Polish brand, only produced in one particular Polish factory. I might be misinformed, of course.

But the blades are not stainless. Most of the Wapienicas I have honed had stainless steel scales (or aluminum, I'm not entirely sure), but the razors themselves were normal high carbon steel.

Let's hope Matt will chime in to correct me if I'm wrong.

Hello Bart,
I have been known to be wrong on occasion.
The term Wapaneica seems to be generic in the USA. It may be wrong though. Most of the 'bay medical razors were named and sold as that. There are quite a few brand names which I do not know. Some were not stamped at all. The ones I and my friends have are made from the equivalent of 440 stainless steel which is a knife makers' steel. It is magnetic due to the high ferrous that allows it to be hardened.
That's my story and i r sticking to it.
Respectfully
~Richard

Feel free to stick to your story as much as you like.

But let the record show this:

In my experience with the straight razor world, a Wapienica, often abreviated to "Wapi", is a Polish brand of straight razors, that do not have stainless steel blades. See this link:

I am merely contradicting your information because I would hate it if future readers of this thread would buy a Wapienica and expect to receive a razor with a stainless steel blade.

That is slightly backwards. Steel defaults to being magnetic because of the iron content. It appears that austenitic stainless steel is non-magnetic, which I understand to actually just be very weakly magnetic, supposedly because of the high nickel content (i.e. different electronic structure). I do not know if this is because of the phase or the nickel content, as it appears that common usage dictates that "austenitic stainless steel" is used to refer to stainless steel with a certain composition (that strongly biases toward the formation of the austenitic phase invariant of temperature) instead of just the phase. I do not know if a steel alloy in the class of "martensitic stainless steels" converted to the austenitic phase would be magnetic or not. My understanding of materials is unfortunately not strong enough to be much more useful on the topic.

I acknowledge Bart's point of view.

Here is a listing for the earlier razors:
DESCRIPTION: Offered to you is this original German WW2 antique surgical razor made by the Aesculap medical company. It was used to shave off excess hair in an area where surgery had to be performed. The blade and the handle were made of stainless steel in order to last through numerous sterilizations. Blade has a small chipping (see photos). This razor was produced for and used by the German Army during WW2. Length: 6 1/2" folded. Scarce and highly collectable item.

This is the information I had been given before. There may be other stainless steel razors or not.
Respectfully
~Richard

Wapienica, Poland, is a town in Poland near where the Wapienica razors were made. My understanding is that that's not even the name of the razors, even if it's what we know them by. Some if not all of them were made by a company (factory?) named SFK. They were made during the Cold War for medical use. (Maybe there were some that were intended for other uses, such as the rarer, more hollow ground one with plastic scales. I don't know.) They were definitely not made in Germany, though.

Maybe Matt will chime in, as he is from Poland.

For the sake of entertaining information - SFK stands for Silesian Scythe Factory, sometimes they were also carrying a FSM brand, which in turn stands for Small-engine Car Factory. I've read (on another forum, though, so take it with a grain of salt) that these two firms were connected, hence both stamps. It all sounds pretty logical for a communistic economy (?).

Less hollow are the surgical ones, they even carry this information on the box - these have stainless steel scales. Most probably for high temperature sterilizing. Hollow ones are named "special" and probably were intended for regular shaving, I believe. But there's also another, fairly rare, incarnation of Wapi - it's called "barber's"; the grind is somewhere between the two above, but the blade is noticeably narrower, 4/8 at max or even narrower. When I got one I was sure it's been worn so much, but the spine wear wasn't showing it and I've seen a few afterwards.

All that Bart wrote is correct. BTW, Aesculap razors have no connections with Wapienica whatsoever, also as far as I remember they were microtomes. "Wapienica" is the name, indeed, not a town.

As for the photo, it might be the "special" one, exactly the kind you're after, Jared. But I can't see too many details on the picture.

So, to sum up (sorry Richard):

Unfortunately this is wrong as well; they're of carbon steel usually, I've never seen or heard of a stainless one, but maybe some have been made.

Good shavers they are, IMO - as for honing, it depends on the grind, the surgical ones will obviously carry slightly wider bevel, but nothing unreasonable.

This is a very informative and interesting thread.

I was also always under the impression that the blades were stainless, which made perfect sense to me. If you made stainless scales so the whole thing could be autoclaved why would the blade be carbon? I'm not saying anyone is wrong, just asking the question.
M

Who says you can't autoclave carbon steel?
I don't know how much time autoclaving takes but I immersed my Wapienica (surgical one, with metal scales) in the boiling water for a couple of minutes and nothing wrong happened. The only side effect was a kind of permanent "oxidation" caused by the smudged remnants of a protective grease (I didn't clean the blade carefully enough).

I recived the razor. The tang photo is down. In my oppinion these are cirylic letters (as I know little bit of cirylic it says: "Blaujed Dumnsitel", not 100% sure, maybe that's some russina straight razor producer)????????

As far as I remember Russian from my primary and secondary school, it's not Cyrillic at all.
I'd say it's French-like and says: BEAUJEU DUMONTEL.
Please see the picture down in
Please, Log in or Register to view URLs content!
and compare the trademarks.

+1 with Maro, Beaujeu-Dumontel was a french cutlery in Thiers. Its stamp look like a gear.

OK...the trademark is definitely the same but on my razor definitely does not write Beaujeu Dumontel (it's clearly visible on the photo of the tang) so it could be (definitely more than what I think) but what's explanation for different letters???????

I'd say your picture marches the Beaujeu Dumontel logo quite well, It's even the same typeface. 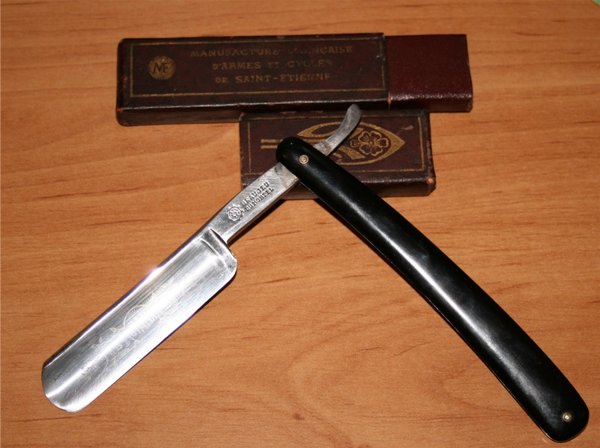 Putting a stamp on steel, is not the easiest of techniques and often you'll find stamps on old razors that are only partially embossed, or with anomalies added to the letters.