I am part of another pass around and this is another razor with different aggression base plates. I guess the Stirling HA wasn't enough to make stay away from razors with settings like HA, or in this case + and ++.

I received the Carbon Cx-316L today. Had time to unpack it and take a look at it before my first shave tonight. I was part of the original Cx-316L pass around about a year ago and so this was like familiarizing myself with the razor once again. Since SU did not exist a year ago, I posted my review on FdR, so you can look up the original review there. Fit is exactly as I remembered and finish was much better. The handle is an improvement over the original "poodle" handle. the three base plates are well marked and it looks like I will be having some great shaves over the next couple of days. Two things that I remember from the original is the tube box and the scratchy burlap sack. Not quite a favorite from before, and still not. 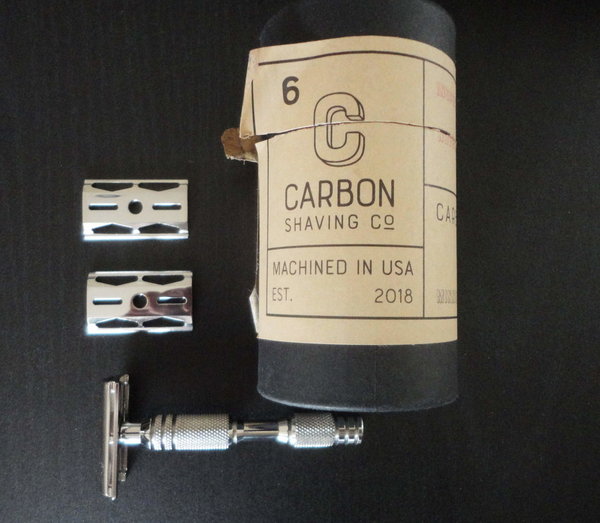 Had my first shave with the Carbon Cx tonight and started off with the original plate just to reacquaint myself with the razor. I remember from a year ago that this razor quickly went on my Must Get list and on my Things to Get When I Hit the Lottery list (which will be hard considering I haven't bought any tickets yet). As mentioned in my previous post, this razor just exudes quality. A year ago it was very overpriced, but now as more razors start to go north of $200, the quality and build of this razor fits in. One of things I like about the razor from before is that the head manages to be very compact and thin. Nobody will complain about it being too big or off balanced. The other thing is that it looked like a stainless steel version of a flat bottom triangle slot Tech (which doesn't exist and makes this more favorable to me since those are two of my favorite Techs). 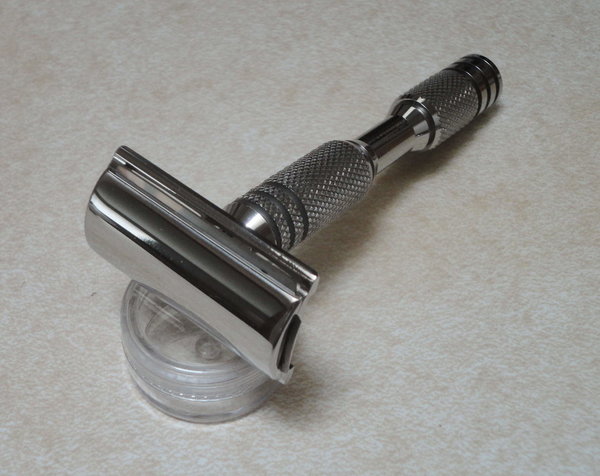 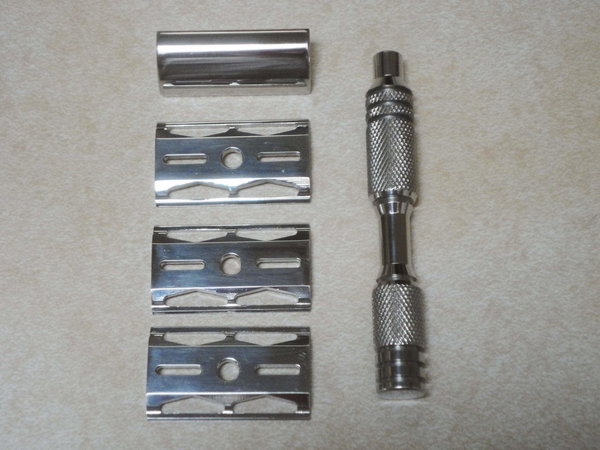 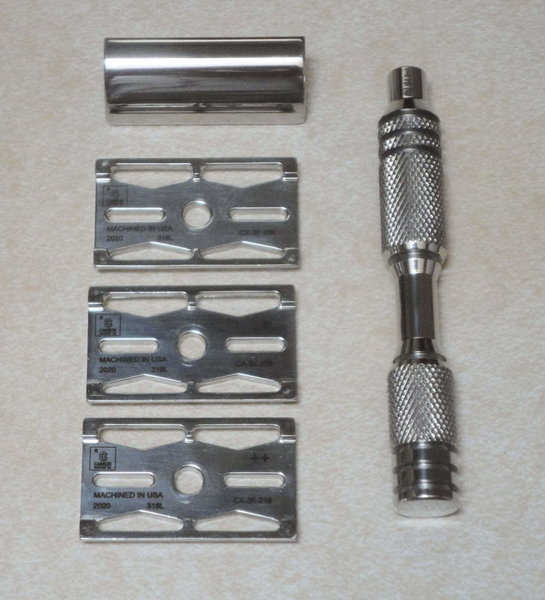 Okay, enough talk, now for the shave. I loaded a Gillette Platinum that had about two shaves on it just because I was familiar with the blade performance. During the first stroke of my WTG pass, I remembered that this razor liked riding the cap more and so adjustment mid stroke solved that immediately. Next thing I noticed was that even though the current handle was a great improvement over the original "poodle" handle, there was still that area in the middle that became too thin very quickly and I had to be aware where I was gripping as I changed my grip for other purposes.

Other than that, WTG pass went very well and I could have stopped there with a near BBS. However, because I was reacquainting myself with this razor, I did an ATG pass and found that I just needed minimal touch up after that pass. This was a two pass plus minimal touch up BBS, which I think was my experience with the original a year ago.

Tomorrow, I will move up to the + base plate and see how that goes. I cannot imagine how a near perfect shave could improve, but then again I loved my original Mamba until the Mamba 70 came out.

SU-Patron
Thank you for sharing your impressions. That razor looks so good!!

Tonight was my first of two nights I decided to spend with the + base plate. First thing I noticed when shaving WTG was that there was more blade feel than the original base plate. Not significant, but noticeable. Even after doing minor adjustment with the angle, the blade feel was still there. I also noticed that there was more stubble left after the WTG pass which surprised me because that was not the case last night with the original base plate. ATG pass went well without any problems, however at the end of the ATG pass, I found that I still had to do a full pass at the jaw line and under the chin area. I was able to do my normal tricks life buffing and slight pressure because at no time did I feel the razor to be hazardous. In the end, I again got a very comfortable BBS.

Hopefully tomorrow night's shave will be better now that I am more familiar with this base plate.

Second and final shave with the + base plate. I made a slight change tonight and used one of my Tech fat handle (I remember doing it with the original Cx pass around a year ago). First stroke of my WTG pass and I knew I got it right. Still slightly more blade feel than the original base plate, but not as significant a feel as last night. WTG pass went very well and most stubble was cleared, very similar to the original night shave with the regular base plate. The Tech handle was shorter and more even to grip and so it maneuvered very well. I am not sure if it really affected the shave or if it was just getting used to the + base plate, but I ended up with a two pass plus minimal touch up BBS slightly better than the original base plate. Now @The King may say that maybe the soap had something to do with it, but sorry, I used the same soap last night. I wish that Carbon Shaving design a shorter handle as an option, and if it looks similar to a Tech fat handle, all the better. 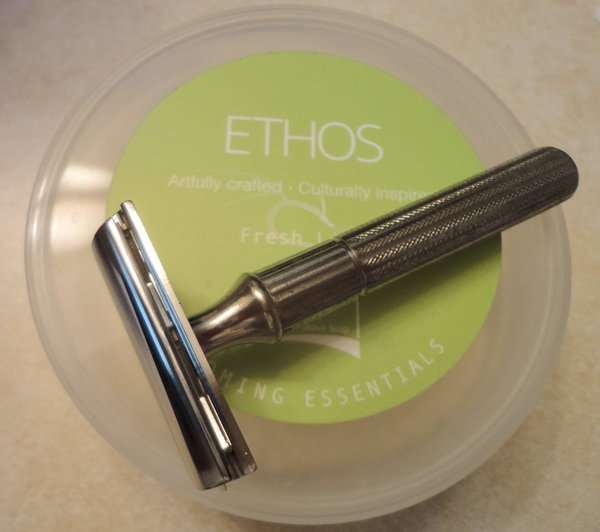 Tomorrow I move on to two nights with the ++ plate.

Tonight's shave was with the ++ base plate and the original handle. I must say that I did not know what to expect especially with the Stirling HA test shave still being in my mind. I started out with the WTG pass using the angle I remembered from three previous shaves (and from the pass around a year ago). I was completely surprised that the blade feel was not significantly more than the + base plate from last night. Of course this is probably because I got the angle right the first time. There was a little more noise than before, but I made very minor adjustments to the angle and it just shaved smoothly. After the WTG pass, I was already at a near BBS and if I was late to go somewhere important, I could have stopped at that point. I continued because I wasn't late to go anywhere. The ATG pass went extremely well and I did my skin stretching and buffing and ended up with a two pass BBS without any touch up. At no time during the shave did I have a fear of slicing a part of my face off or not pushing the razor to do it's best.

With the ++ base plate, this was the first time the original handle actually felt comfortable and worked well with the head. It allowed me to keep no pressure and allow longer strokes using the weight of the razor do the work. If I were to compare it with my CG Lvl3 SS head, I would give the advantage to the Carbon Cx. Tomorrow I actually look forward to my second shave with the ++plate and the Tech fat handle.

Tonight was my final shave with the Carbon Cx and the ++ base plate. I finished off using the Tech fat handle. WTG pass was very good. There was minimal blade feel and the short handle made the head maneuver well. I ended up with a near BBS and with some touch up, I would have achieved a one pass BBS. Instead I went for a full ATG pass and at the end of that, there was nothing left to touch up. Another two pass BBS using the ++ plate. I have to admit that this plate is very efficient without being aggressive, which is what I prefer in a razor. The Cx actually beats my CG Lvl3 SS razor by being slightly more efficient and less rough . I believe I can actually use the ++ plate as a daily shaver. 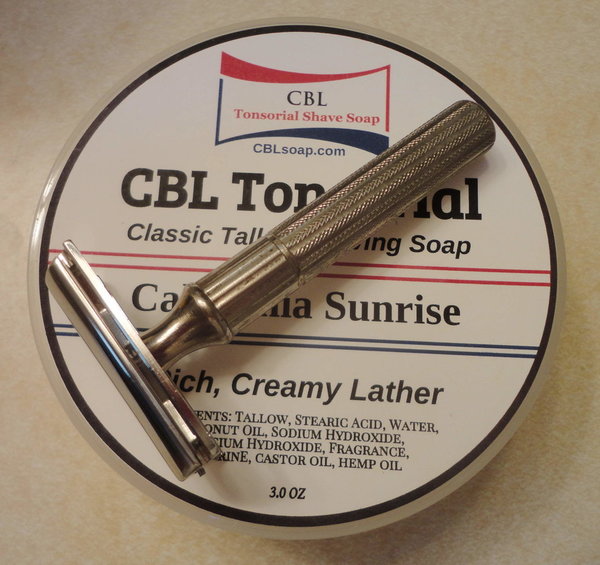 I was part of the original Carbon Cx pass around a year ago and had this razor on m short list until my short list got longer and other razors moved in front. I am reminded that this razor is still on my short list and my only real decision to make is if I will get the standard plate or the ++ plate.

Some final thoughts on this razor:

1. If you prefer mild razors, go with the standard plate. It is extremely efficient without being rough.
2. If you prefer something more substantial, go directly with the ++ plate. It is much more efficient than the + plate without more blade feel.
3. This razor begs for a short handle option. The head is already very compact and the increased maneuverability just makes it a better shaver.
4. Get rid of the regular handle. there is too much of a difference in diameter between the top/bottom and the middle area making it a challenge to easily change your grip. The Ti handle is a better design.
You must log in or register to reply here.
Share:
Facebook Twitter Reddit Pinterest Tumblr WhatsApp Email Share Link
Menu
Log in
Register
Install the app
Top