A couple of weeks ago as I was checking up on an Aliexpress order, I came across what appeared to be a clone of the RR Mamba. It was stainless steel CNC machined and it came with a scalloped cap similar to the Timeless. It was not cheap by Chinese razor status, but it was just slightly more than the cost of a real RR base plate. Although they did not say, I could tell that they were copying the Mamba and with a .70mm blade gap, they were cloning the Mamba 70. I know I shouldn't be even entertaining getting a clone of what I consider to be one of my best shavers, but I just had to find out for myself if the Chamba 70 was as good as the Mamba 70.

First of all, in comparison, the Chamba is etched on the bottom of the base plate similar to the latest RR razors. It also seem to be individually numbered, but the only reason I assume this is that the serial number of my razor head is different from the one in the picture at Aliexpress. 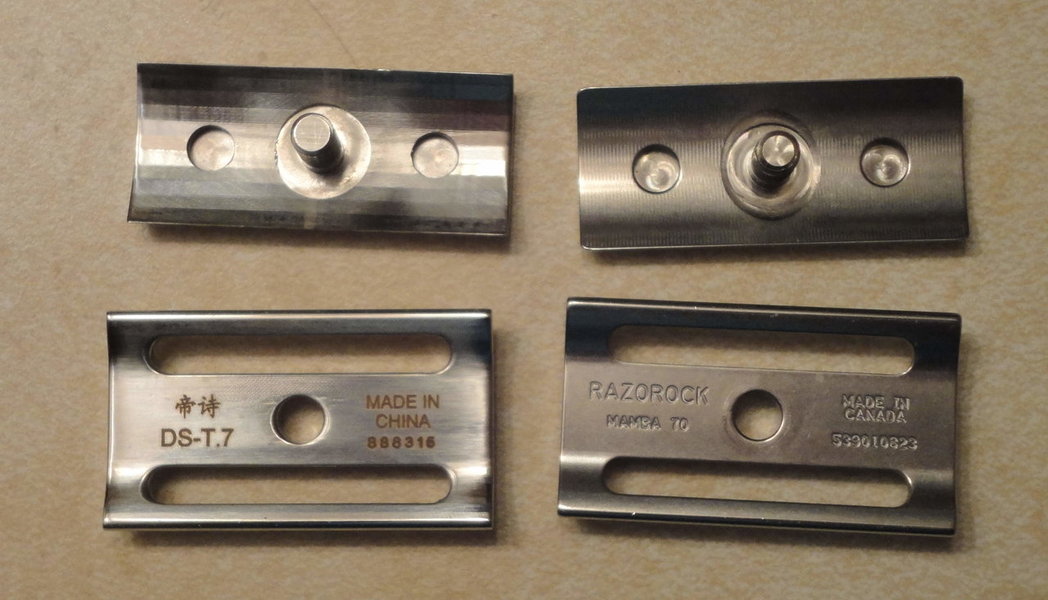 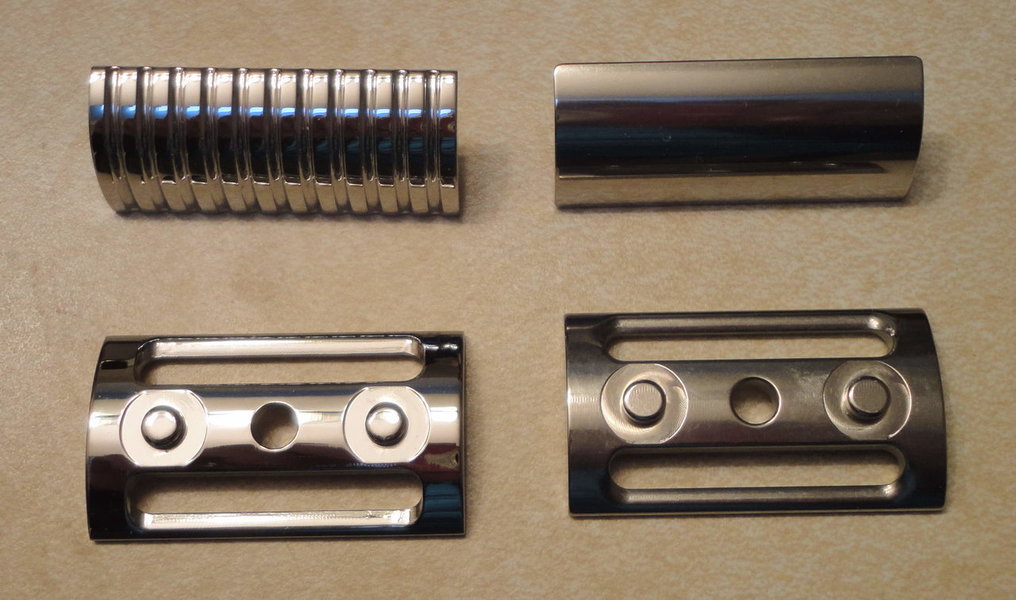 Finish is not quite as good as the RR as can be seen in the top picture where there is some flashing in the indentation around the screw post, some unevenness along the top edge of the cap, and roughness on the inside of the safety bar in the bottom pic. In addition, when fitting a blade in the mount points on the base plate, the Chamba was a little loose, where the Mamba actually clicked the blade in place. This could be either a good thing or a bad thing, the good being that the blade does come out easily for the Chamba (where sometimes it did take an effort to remove the blade from the Mamba), and the bad in that maybe this might be an area of misalignment. 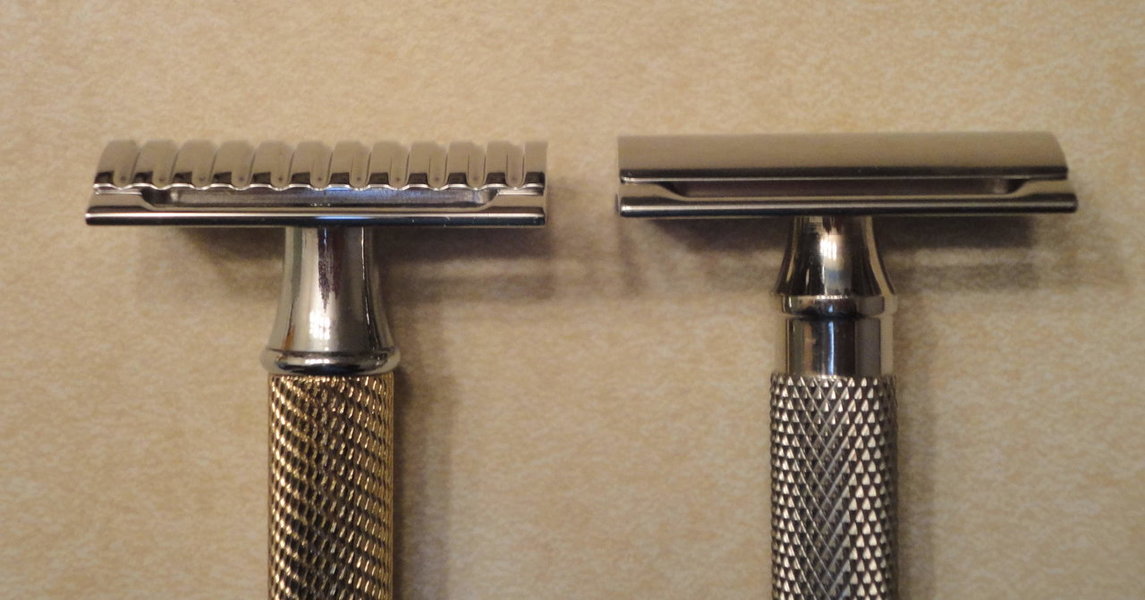 The Chamba is on the left and the Mamba on the right. The Mamba has a thicker base plate and a more rounded guard.

First shave will be tonight. I decided to shave half my face with the Chamba and the other half with the Mamba. I will report on the results later.

SU-Patron
I like the looks of the cap!
And the Mamba is a fine shaver.

First shave tonight with the Chamba 70 and immediately I put it up against the real Mamba 70. Both blades had about three uses to them and so I figured they should be equivalent. The Chamba had the left side of my face and the real Mamba had the right side. WTG pass was very smooth and efficient for the Chamba. The Mamba had just a little more blade feel on the right side of my face. I am believing that the scalloped cap of the Chamba actually mellowed out the shave just noticeably more. ATG pass was about even for both razors, however the Mamba left just slightly more stubble. To be fair, I did an XTG pass to my jawline and under my chin and both sides of my face ended up with a BBS.

Clean up is something I never talked about, but had to mention it tonight. When I took apart the Chamba and lifted the cap, the blade was left in the cap held by screw threads, which made things exceptionally easy to take the blade out and wash off. The Mamba had the blade still on the guide posts and I had to use my fingernail to pop it out.

To be totally honest, I really wanted to say that the fit and quality of the Chamba was so inferior that the shave did not come close to the Mamba. Let's face it, I consider the Mamba 70 to be one of my best shavers. However the imperfections in the machining of the head as I pointed out earlier had no effect on the shave. The blade guide post allowed only enough play to make removing the blade easier and did not affect alignment. The scalloped cap actually worked to give a smoother shave without losing efficiency. I really hate to say this, but this razor is an equal to the Mamba when considering shaving alone. Possibly in another six months, the build quality will improve.

This is bad news for me because now I have to closely watch the stainless steel CNC R41 clone and possibly pick that up when the second batch comes out.

Being a Frankenrazor enthusiast from a while back, I immediately started swapping the Chamba parts last night and came up with the CGCOC .84 (Chamba Game Changer OC .84). The scalloped cap of the Chamba not being as precision fitting as the Mamba, actually fit the GC base plates better than the Mamba cap did (yes, I tried it a long time ago). 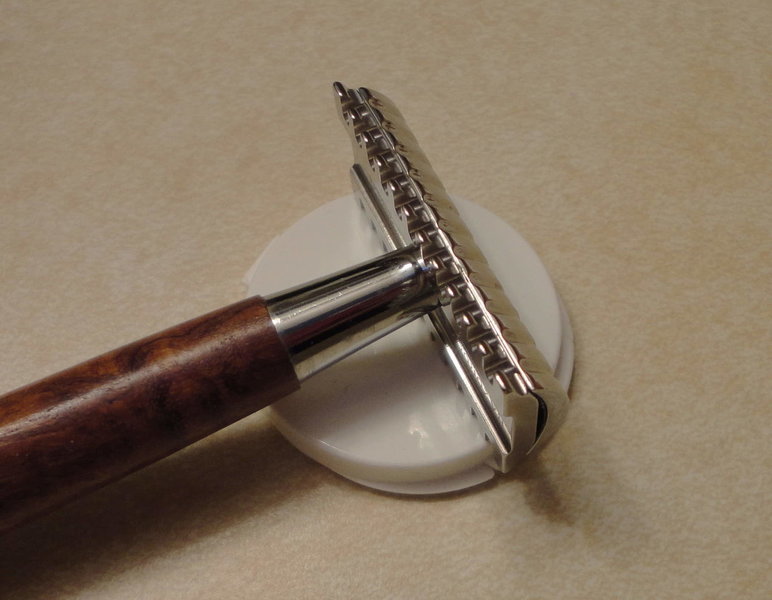 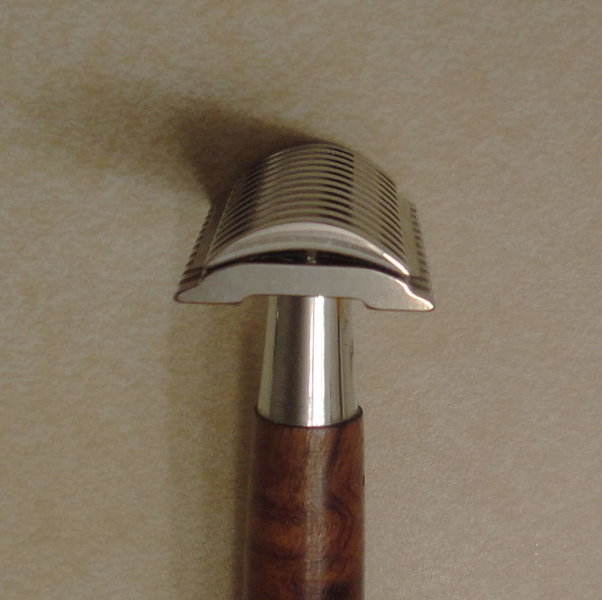 First shave was tonight and I was amazed at the results. While there was more blade feel than the Chamba, it was not as much as the GC OC .84. The cap being scalloped and more domed, allowed more angles to play around with and I actually ended up with a two pass, no touch up BBS. This razor will work it's way into my rotation very soon, just as the RR razors have.

I just could not resist, and ordered one - scallopped cap, KVS handle.
The KVS handle looks like a carbon copy of the Karve (Christopher Bradley) handle !

SU-Patron
it's not an open comb, Jan

I would be curious about the R41 clone. That’s the only downside to the Muhle. It is Zamak....

When Muhle released the Rocca a couple of years back, they checked off a bunch of blocks with that razor - stainless steel, and something as aggressive as the R41. But you are correct in that is was not an OC or at least a SB with bumps. I am waiting for DS Cosmetics next version of the R41 clone since they actually said on their site that this was an early version and so don't expect perfection. Never a good sign when Chinese razor companies say that because even with their best stuff, many are not even close to perfect.

I have the Rocca v4 and the R41 2013. I prefer the R41 because the shave is closer and smoother than the Rocca for me anyways. I will wait to see some reviews before I pull the trigger....