About a year ago, I brought 2 so-called "Cotcarbs" with me from one of the visits to Ardennes. I had seen them over there before, knew what they were, but never really got around trying one. Around that same time, a few of our members were looking for a cost-effective hone to repair damaged razors' edges and jump straight to a Coticule after that. Sliced bread for a DMT-600grit, but there are plenty of equally great alternatives on the market of synthetic hones. But what about the "Carb" side of a "Cotcarb"?

There's also a variant, glued to a wooden paddle:

It sounds like an excellent idea, and I wondered about the quality of the Carborundum side for razor repairs.
I tried it a couple of times and came to the conclusion that the carborundum is really not of the best quality. It's rather gritty, and doesn't survive a comparison against my DMT at 600 grit, which has not only a smoother action but is also faster, doesn't need lapping, doesn't glaze and blablabla. But for sharpening pocket knives the Carborundum side functions, and I wouldn't mind carrying a small one in my backpack during a long hiking trip. It would not only serve to repair the occasional chip in the edge of an abused camp knife, but as we now know, the BBW also puts an edge on a straight razor that leaves nothing to be desired. Sharpening and shaving in the wild, do it once and become addicted!

I have sent a Cotcarbs to one of our members, MarkinLondon, and here's his verdict, shared in an e-mail a couple of days ago. (Note that Mark may not have been aware that Cotcarbs exist in larger dimensions as well):

Thank you for the review, Bart. I'd been curious about them. Unfortunately, no one in the US seems to sell them, and, considering how readily available carborundum hones are here, it didn't make sense for me to order one from Belgium.

I've heard some good things about some Japanese-made low-grit carborundum waterstones. I wonder if it would be economically feasible for Ardennes to look into those as an option.

Tri-hones as shown below with one synthetic, and two Arkansas stones seem to sell well in the US. 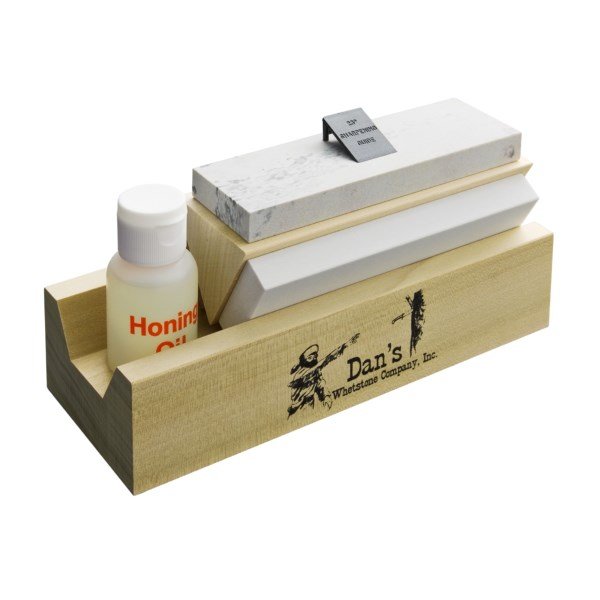 That has always puzzled me too. Have you any idea how they arrived at the 4000k figure? I'm at a loss to explain it to myself. Also, thanks for the review, I've been curious about the cotcarbs for a while.

I think it was mainly marketing. In a world that's dictated by synthetic hones, many insist on numbers for natural hones as well. At the time they started rating Coticule, I suspect that 8000 was about the highest on the synthetic market. And because the results are in no way less than that of a synthetic 8K stone, they rated Coticules at 8K as well, even though there is no direct correlation with the average garnet size of Coticules. The garnets, due to their shape, cut wide and shallow, whereas particles of man-made hones typically cut deeper in relation to their diameter. Coticules have roundish garnets with a hardness of about 7.5 Mohs. Synthetic hones tend to have spiky particles with hardnesses well above 8 Mohs. In its upper region, the Mohs scale is more or less logarithmic, so these are serious differences.

But it never made sense to me either. The stone was supposed to be coarser, but it was slower at the same time. And it never appeared to be coarser in the results it delivered.

Thanks. Nice to have my puzzlement confirmed by one who knows better than me. 4k? A mystery. Thanks again.
J

The idea is great & I thank you for the review Bart!

I have been suspecting that the Carb would be inferior, because of the price.
And now I know for sure.

There is actually rather big differences in various carb-stones.
The cheap ones can be ha for next to nothing, but they perform cheaply too,
pretty much like the one in your test.

Here's a (in my opinion) good carborundum. About 1/5 of the cost of a DMT

Let's not get carried away with creating some sort of mystically perfect combo hone when many of us already have the tools we need to maintain kitchen knives. What my tireless reading has revealed is that a bevel can be set by anything from 600 - 1200 and that hones capable of sharpening razors can be used to finish a chefs knife.