I thought I'd share my two other coticules (you all have already seen my first one).

My second was bought from theperfectedge.com. I think it looks most like N°21 in the Vault. It certainly seems moderate in speed, at least compared to my other coticules. Pictures here:
Please, Log in or Register to view URLs content!
I think the layer on this is pretty thin, but it should still last me many years.

My third coticule is a natural combo that I bought from a member at B&B. I haven't taken my own pictures yet so will post the thread:
Please, Log in or Register to view URLs content!
This is my favorite coticule so far. I need to lap the BBW side to test that out. That side is very thin. The coticule side is probably thick enough to last me the rest of my life, even if it were my only razor hone. Its tag says "Pike's" on it, so I imagine that it was sold by one of the ancestors of today's Norton-Pike. What would that date it at? Pre-WWI?

The vintage one looks a lot like "Les Petas", a layer currently not exploited, but I have a small sample of it, courtesy of Ardennes. It's another layer that was highly esteemed in the past. As far as I can assess the small sample, it's a very fast layer.
That once again illustrates that the old qualification systems favored speed as an important criterion.

Here's a picture of the sample (scanned on a flatbed scanner):

I 've heard about "Pike". I believe they sold a whole variety of hones, including Coticules they imported. Maybe the venerable Smythe will chime in with some additional background information.

The first one (my 2nd) becomes fairly yellow when wet.

I would say that the Pike coticule is fairly fast. It is certainly a pleasure to work with (not that the others aren't). The Ardennes is interesting in that it gives an enormous amount of feedback. The Pike gives less feedback and is "easier" to use.

I'll need to go to Belgium some day and visit Ardennes. This is too much fun...

Your nr2 one looks definitely like a La Grise. La Grosse Jaune is as yellow as a smiley when wet.

Your nr3, I don't know. I thought Les Petas, but I could easily be wrong.
Here's a picture of the transversal side of Les Petas, that shows the very typical blue banding of that Layer.

That slurry stone is an interesting specimen as well.

"Yellow as a smiley when wet." I love that description.

By the way, if it's interesting enough to you, you are welcome to copy and distribute those pictures as you please. I meant this thread mostly to share and make note of these wonderful rocks. Ah, maybe someday there will be some great photo database of coticules (and other natural hones). :thumbup:

Pike probably imported from another company and mining pits than those active at the Ol' Preu concession. (The current Ardennes Coticule quarry). It could have been the Old Rock company, which was the largest Coticule exporting firm for most part of its existence. By the way: "Old Rock" is the name of a mine, a company, a brand and a quality category. The company not only sold "Old Rock" Coticules, The mine with the name did not deliver solely "Old Rock" brand, And the "Old Rock" company bought rough Coticule rock from several mining operation, some of which they turned into "Old Rock" hones. Anyone still following?

Unless Smythe digs up something, we know nothing about where Pike obtained its Coticules. There are a number of Coticule layers that I have never seen (e.g. the famous "l'Allemande" layer), and it isn't even sure if, let's say, "La Veinette" at ol' Preu looks the same as "La Veinette" at Old Rock. There is a distance of several km between both locations. I already know that La Grise at Regné is a significantly bluer gray than the same layer at Ol' Preu (compare n°1 and n°2 of the Vault).

You sure are welcome to link pictures to your posts. Just place them in between tags. The format is:
Code:
Please, Log in or Register to view codes content!
If you don't want the picture to resize to fit within the post, leave out =900.

Yes, we will add a future Coticule repository, where members can add pictures and information of their Coticules. That has been the plan since the beginning of the website, but so far, I haven't found the time to put it together. Maybe I can find some help with that. I'm going to start a new thread concerning the repository in the "website announcement and suggestions" section.

Not sure. My head's still spinnin' a bit.

Yeah, I figured that variation across distances of kilometers makes this harder.

I'm curious where Smythe gets his information.

I didn't link the pictures directly since they're large and uncompressed TIFFs. One problem with being at a university makes one forget other people's bandwidth limitations, so I just make a habit of minimizing my email attachment and direct-linking-of-images-into-threads habits... I can resize and upload later if people want.

Also, I noticed that the coticule side is ever so slightly bowed in the middle with a low spot on one edge next to the visible line. (I'm unsure if that line is a crack or vein.) I want to lap it due to that small low spot, but perhaps I'll lose to much if I do that. At least I'll chamfer the edges.

I mean, I have slurry stones for each of my other coticules. It's just nice to have one for each. Just one of those little obsessions. I'm also hoping to find a box for it.

Edwin Burbank Pike and his brother Isaac Pike of Pike Station in the town of Haverhill ran the A.F. Pike Manufacturing Co in the late 1800s, primarily manufacturing scythe stones. At the time the company practically owned the village of Pike and had warehouses, quarries and timberlands in Indiana, Ohio, Mass, N.Y, Belgium, Germany, Austria, Scotland and other European countries. I would not be surprised they imported "Old Rock" Coticule from Belgium into the Americas. 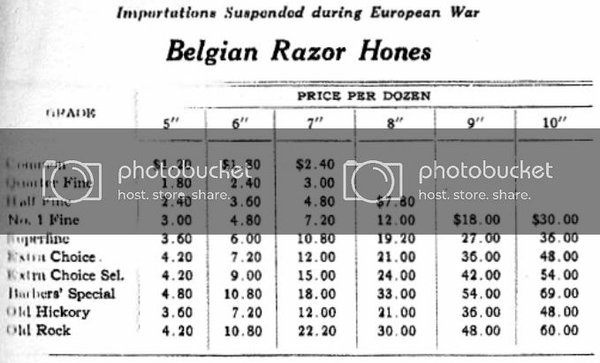 I owned a barbers' special (the highest grade) for some time. It was my first ever coticule. It was manufactured by TTO I believe. The layer i'm guessing was a petite blanche or a fast veinette. It was very fine and very fast on slurry. It had a lot of lines on it as well. Pictures are somewhere!

I also own an old rock (the second highest grade) it was sold by SR droescher. On Ebay it looked like a Veinette, however I don't think that is what it is. It has two silvery patches the size of quarters on it. It also has a single vein up the middle that is actually a crack (doesn't affect honing at all tho :thumbup: ). It is med hardness, very sandy texture, and impossible to dilocot with! The slurry released is so gritty, no matter how much you dilute the bevel looks like 4k level all the way to water. It is still very gritty with water and kind of auto slurries. The BBW on this one is the best ive ever used for speed. It generates swarf rapidly and is gritty just like the coticule side is. Slurry will darken somewhat with it too. If someone wanted to test it out I would have no problem sending it to them. 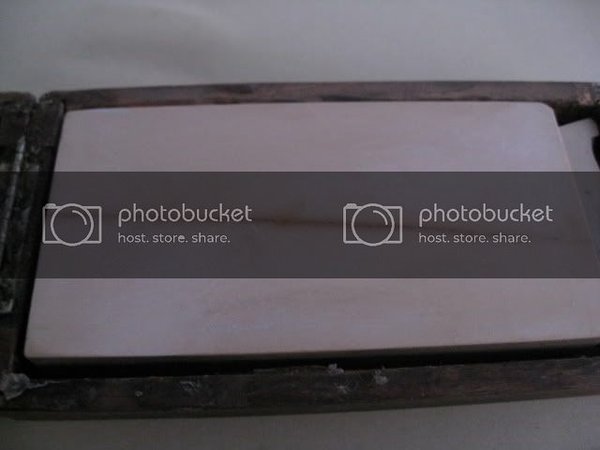 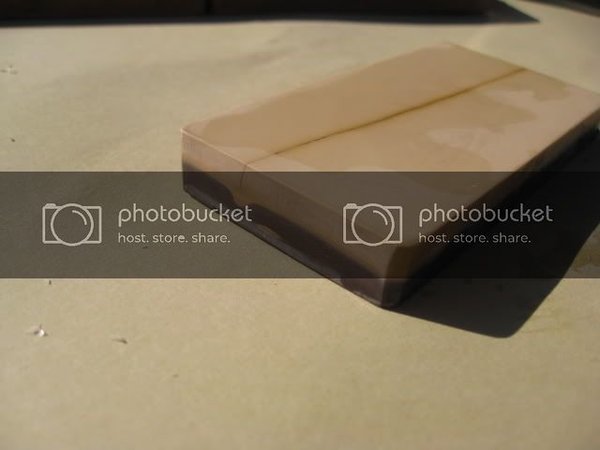 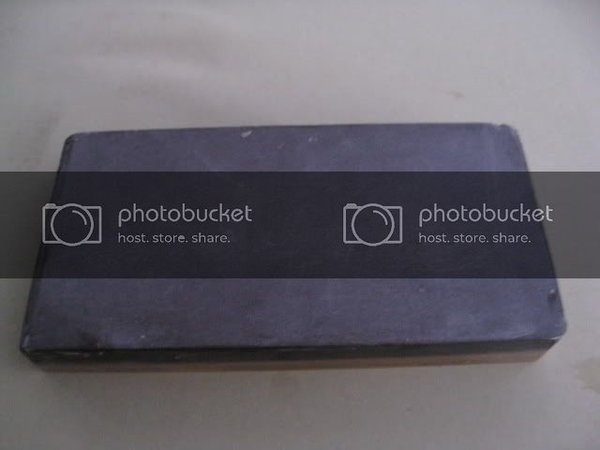 My third is an old rock and is one smythe and I both own. It came from a JR Torrey paddle. It is very hard and weird looking. It looks a lot like a piece of wood. If I had to name its layer based on specs alone (not looks) my guess would be it is a lot like a la grise. It is med-slow speed on water, but the slurry is very fine not gritty at all. With water it is the slowest coticule I own. Dilocot is very easy on this one.

An interesting thing about this one is that when you lap it those little specks don't go away. They stay raised above the surface and will make a "brisker" edge. If you rub it long enough with a slurry stone they go away and the hone leaves a smooth edge. Second favorite to my hybrid coticule. 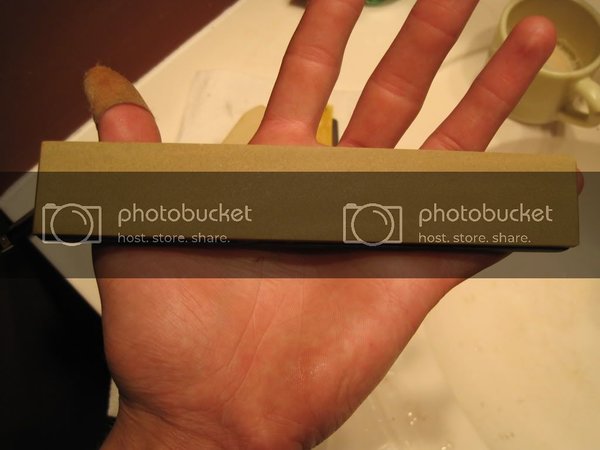 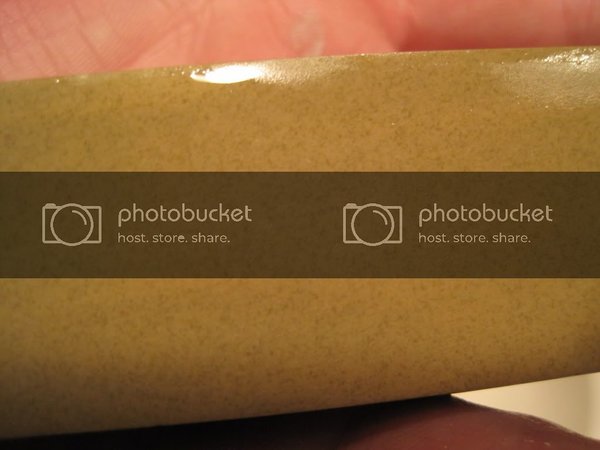 Also, I was wondering how much a coticule would cost today based on that chart. I paid 75 dollars. A 6in extra choice selected coticule was 9 dollars during WWI (I think that is what they are referring to?) a google inflation calculator puts the price at 117.50$ today!

Naww, you want the Barbers' Special!

The pictures that Slartibartfast took are now gone, so here are some new pictures (sorry, still phone camera):

I noticed that N°41 in the vault has those pink dots, but I didn't think I'd be lucky enough to have a Salmon Rouge. It looks too light to be Salmon Rouge based on the small picture of N°41. I'm still wondering what this coticule is if it's not indeed Les Petas. I will try testing it tonight.

Oh my, that's a hefty coticule layer, isn't it!

Out of curiosity - Bart, how many coticules do you have at home? :w00t: