Some Coticules can be generalized by there color. Reds seem to be fast, green stones seem to be a bit harder, browns ( LGB ) can make a very mellow edge. I'v seen hones with some blue/shadowy tones in them, is there a quality associated with this coloring?

There ware some great ones on TSS a while back, but they were sold and taken down. The best example I could find is a vintage Coticule, but its similar enough to what I mean in modern stones. 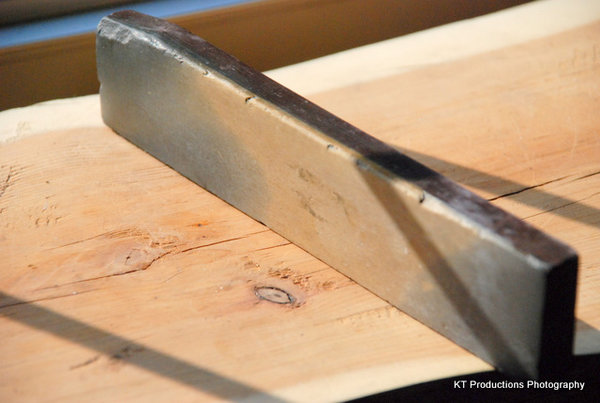 well spotted it looks like that to me.thats hould be interesting side to hone on.

I agree too, I also think it should work wonderfully

As for using colour to grade the stones perceived performance, I am not sure that will ring true, different layers do have differing looks for sure, but I would say that apart from stones that fall way at opposite ends of the scale performance wise, the differences in layers is very over emphasized, any Coticule should be capable of producing a fine sharp and mellow edge.

Bart to the rescue with a photo of exactly what I was trying to describe. The Coticule on the bottom left has the smokey blue coloring. It still might not mean anything, but an example came to light. Photo credit goes to Bart, thanks!

And if I'm at all right on the color bit, the diamond shape stone on the bottom right is in the middle of an identity crisis

Layer maybe over emphasized but there are differences. That said my question was more directly related to any stone that might happen to be of the given color, and if they are more likely to have a specific quality. For example, I'v read more than a couple places that reds tend to be faster, and the examples in my collection would tend to agree with this. Trust me, I'm not taking a sample of a couple rocks and internet gossip for gospel. I just thought it an interesting question.

As far as correlating properties to stone colors, I really am very careful with that. In most cases, such as this "smoked" one, I don't have any clue. Red certainly doesn't mean "fast" in my book. Thought it doesn't mean "slow" either. Nor "Medium" for that matter. I've seen red(dish) Coticules perform all over the spectrum.

There are only few morphological correlations that I'm adhering some truth to: of course we have the La Vertes. They all have a greenish hue. And the majority of them is on the slow side. But La Verte is not just a color. It's a Layer.
Then we have hones with red lines running across the surface. That mostly occurs at La Dressante, but also Les Latneuses occasionally has them. These seem to be invariably fast on water. Note that I said water, and that I said red lines.

The black manganese lines seem to predict good speed (on slurry) in most cases. And black manganese hairlines on a La Dressante usually turns out to be an amazingly fast Coticule on slurry that slows down to the finest abrasive sensation on water you've ever felt. One of my favorites.

Then there are La Grosse Blanches with brown okapi stripes, as the one I was using for the Dilucot video. Those usually have an almost soapy slurry and seem guaranteed to leave mellow edges.

But that's really about it. Other than that, I have not been able to distill much information out the appearance of a Coticule.
But they can be beautiful, that's for sure.