I have heard that Hess and some other fancy celluloid razors have the celluloid rot problem. This is the first time I have seen the Wedge distortion. Feather Edge and Golden Edge. One other razor total trash! Twisted scales and trashed blades are very common from some forms of celluloid. And they can take out blades next to them! See Photos.

Look especially at the wedges…Wow 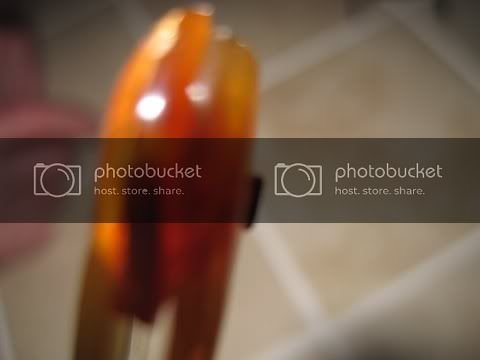 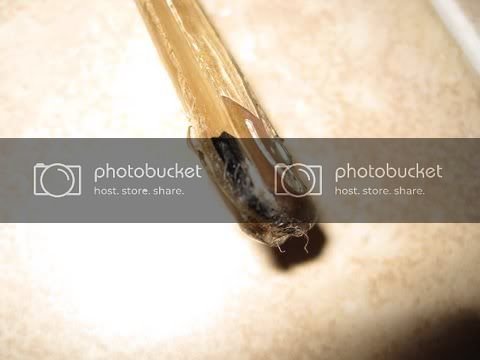 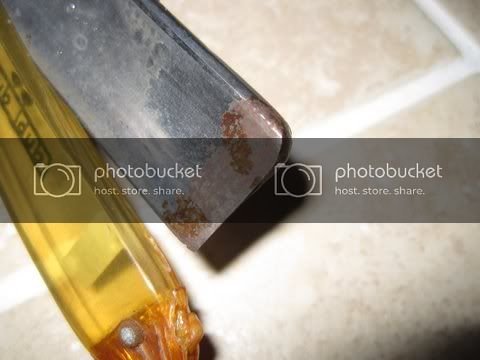 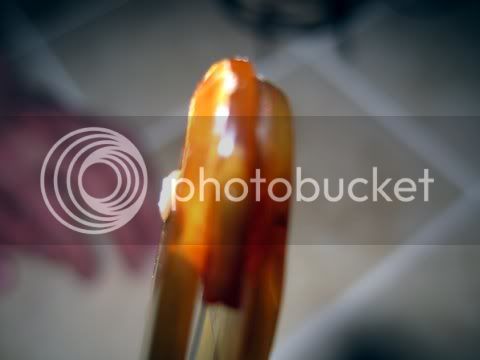 Both razors need new scales and can be buffed out.
So we will be trying things to make them all nice again.
Respectfully
~Richard

thats the worst case I have ever seen, I have seen rot that attacked the blade (from releasing gas) but the scales looked fine, these look like have erupted!

thank you for sharing

The problem is that the celluloid is made from a process which dissolves cellulose, either wood pulp or cotton in acid… Either: Sulfuric/Nitric or Acetic acids. The acid bath converts the cellulose in to a soft, moldable transparent plastic which is further processed by colorant and, perhaps, a chalk filler additive. It is then molded.

The resultant problem is; as the formed plastic ages, some acidic fumes are generated as the plasticizing acid is released. A similar process happens with most plastics which release plasticizer volatiles as they age and become brittle. Those plastics do not release an acid. Vapor though.
Some of the scales I have seen go bad are amber, but the pretty opaque pearlescent ones on the DD and Hess are often the culprit. They often have just a skin of some material formed over the scale. So, If the scales are pearlescent, or amber transparent, or any celluloid, keep a watch on them. Good idea anyway to prevent rust from starting on any blades.
There are some other suggestions I have read that say to use some certain products and I would ask you as individuals to search for them, I would not recommend any methods I have seen as a permanent solution.
Respectfully
~Richard
PS. I have Camphor blocks in the boxes I keep my "To-Dos" in. I had heard that they coat steel and reduce the chance of rusting. Who knows?
PPS, again a cross posting!

Obviously these are way too far gone, but IIRC Emmanuel posted a preventative method? Something like wiping once with acetone and a coating of shellac?

Hopefully he will spot this and correct me

celluloid decay is to my knowledge a self-contained process. Sealing the object will not stop the decay, though it might temporarily shield the blade from corrosive gasses that are released from the decaying celluloid. It are also these gasses that provoke the decay of neighboring celluloid parts. Ventilation is always a good idea. Bur celluloid is destined to disintegrate from the day it is conceived. A bit like humans actually.

Yes is correct. That's a good method to stop the decay. The best way is to fix a veneer in side of the scales.
Wishes
Emmanuel

Bart i repaired many musical instruments that had a lot of celluloid parts like belly protection ply, tuner knobs.bridges etc i never saw decay due to age and i have to say these instruments are much older than mentioned razors. So i don't believe that the celluloid decomposes by itself.But i saw many times celluloid scales which not only decay but also affect the steel .I conclude therefore
that the celluloid troubled only when dresses a razor.I assume ,is the humidity or the lack of ventilation which is the most plausible.
Best regards
Emmanuel

You could be correct in the assumption that the environment has something to do with the decay. I will point out that Cellulose Nitrate was used as a photographic film stock.
""" from Wikipedia:
Nitrate film base was the first transparent flexible plasticized base commercially available, thanks to celluloid developments by John Carbutt, Hannibal Goodwin, and Eastman Kodak in the 1880s. Eastman was the first to manufacture this for public sale, in 1889. Unfortunately, nitrate also had the drawback that it was extremely flammable (being essentially the same chemically as guncotton) and decomposed after several decades into a no less flammable gas, leaving the film sticky and goo-like (and ultimately dust)."""
Opcit:

So I should not keep my cracked ice Dubl Duck in a leather case? I live in a dry climate - San Diego, but it is a razor I only use every other week or so because it still has all the gold on it. I also put mineral oil on the blades if they are going in a case. Most of my scales are horn or bone, but is mineral oil bad for celluloid?