Because I grew up in Hawaii, I follow anything shaving related from Hawaii. Unfortunately there is not much. Maybe a few soap makers that think using their regular soap recipe and putting it in a round mold makes it a shaving soap. Hawaiian Shaving Co was started by a wet shaver that thought of using secret ingredients that only the local Hawaiians knew about to make his products. He made shaving soaps, beard oil, and aftershaves. One product that was very limited in production was his hand carved Hawaiian Koa shaving brushes.

Hawaiian Koa was forested to extinction a century ago because it was very prized for it's rich color and grain pattern. Today, you can get Hawaiian Koa only through reclamation and cannot go out and cut down a tree. I got two of HSC Koa brushes.

The one on the left is named Kamaka (The Eye). It is shaped like a parallelogram like many of @efsk razors, and you can see the eye in the grain. Kamaka was to guide me back to my roots in Hawaii. The one on the right is named Kukuna O Ka La (Ray of the Sun). This one was more of a trapezoid shape. I had made a request to HSC when both my parents died. I told him that when a Japanese names a son, a Chinese character making up the father's name is part of the son's name. In my case, both my parents shared a common character and so it was a no brainer to use that character in my name. the common character was Mitsu which means sun ray and so this brush was made to honor my parents. In this case, the sun rays is depicted on the bottom as a sunrise (or sunset).

Kamaka has a 24mm SynBad knot and Kukuna O Ka La has a 24mm Tuxedo knot. Both I treasure very much. 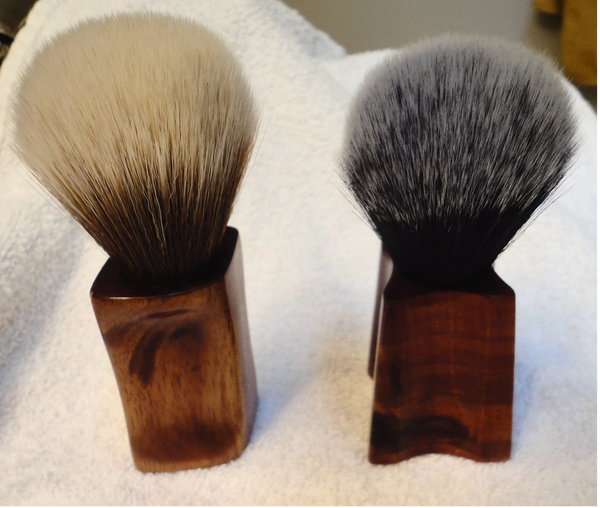 Moderator
SU-Patron Gold
Beautiful brush handles.
Thanks a lot for sharing the personal background info on these.
Cheers!
Richard