I just received the Homelike Taiga today as part of a pass around. Just doing a quick inspection, I have to say that the fit and finish is very good and the razor has a good balance in my hand. It came with two base plates and no instructions and so I had to try to figure things out myself to change the base plate. I assumed that the handle needed to be unscrewed first, then the adjustment ring, but it took a while to figure that the threads were reversed and so to remove the handle, you turned in the direction that you would normally do the screw things in. 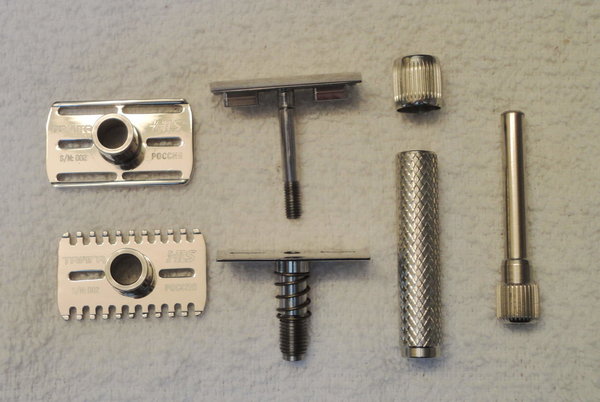 So now that I know how to take the razor apart, I decided to try the OC base plate first.. In assembling the razor, there are marks on one side of the head parts (similar to the Progress and Variant). On the Taiga there are actually three marks (on the cap, base plate, and adjustment plate). All three need to be on the same side, otherwise the razor will not zero at 1 (or close to 1). Two things I noticed immediately in trying the adjustment is that unlike the REX Ambassador, the Taiga will not stop at the highest number, but will continue going around and getting more aggressive. Also unlike the REX, there is no red dot on the adjuster and so it is very hard to see where the mark is, which is not a real problem because the numbers on the base plate is also hard to see. Thirdly (yeah I know I said two), the adjustment plate does not have tabs on the sides like the REX (or the original Gibbs) which made it easy to keep the adjustment plate in alignment. 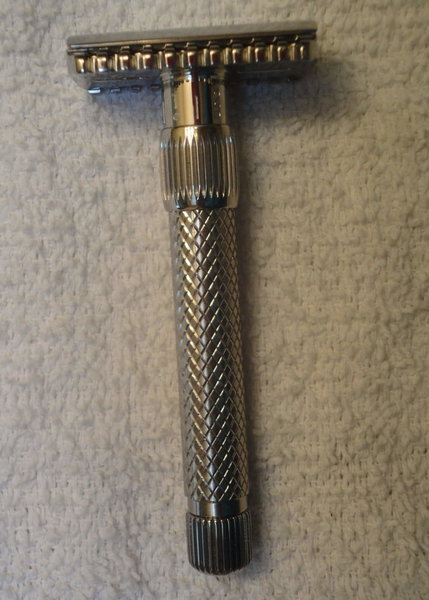 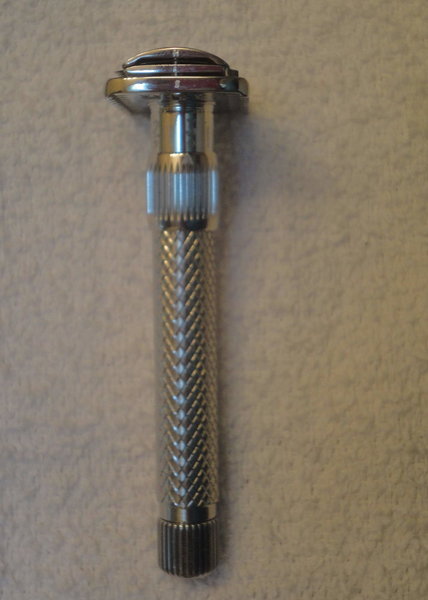 So on to the first shave. I used the OC base and started with a setting of 3.5 using a relatively new blade with just two shaves on it. WTG was very rough and even after adjusting the angle, it still was quite aggressive. As rough as it was, a lot of whiskers was taken off in the WTG pass. For my ATG pass, I dropped the setting down to 2.5 and the comfort level increased significantly. I ended up with a two pass BBS with minimal touch up.

Tomorrow, I will continue with the OC base plate, but this time, I might start with a lower setting and maybe even move up a half step for the ATG pass.

So @Clouds, after the first shave, my bank account is still intact.

Early days - I believe that you have it for a week.

Looking at the engraving on it - I wonder why they didn't paint fill it.....

Tonight's shave was the second shave using the OC base plate. I decided to dial down the WTG setting to 3 and rode the cap a little more than last night. Blade feel significantly dropped, but was still present. However, it was bearable and not rough. The WTG pass actually turned out more efficient than last night and so I moved on to the ATG pass. This time I dialed down the setting to 2.25 and again, a much more comfortable shave with greater efficiency. At that point I ended up with a two pass plus no touch up BBS.

I have to say that I am more impressed with the razor now than last night.

@Clouds, after tonight's shave, my bank account might have been threatened if it wasn't emptied earlier when I purchase a Paradigm Ti II.

And you haven't used the SB yet - so still early days.

Tonight I tried the Taiga with the SB base plate. I started at 3.5 once again, thinking that it should be less rough than the OC at that setting. I was wrong. The blade feel was just as pronounced as the OC. I did dial it down immediately to a 3, and finished the WTG pass comfortably. ATG pass I dialed down to 2.5 and had a comfortable pass. It was not quite as efficient as with the OC plate and I did have to do an XTG pass along my jaw line and under my chin area. I still ended up with a relatively comfortable BBS.

Tomorrow night, I will start out with a setting of 3 and then dial down to 2.5 and see how that shave goes.

If it goes well, my final shave with the Taiga, I will be comparing it to my REX Ambassador on Monday.

@Clouds, as of tonight's shave, I will not have to sell my kidney just yet.

WOW, This surprises me - but as we say YMMV

Second shave tonight with the SB plate on the Taiga. I started off with a WTG setting of 3.25 which significantly lessened the blade feel and was able to complete the pass in comfort. There was a little more stubble left after the pass than I was expecting. For the ATG pass I dropped the setting down to 2.5 and had a comfortable pass. Again I did an XTG pass on my jaw line and under my chin area and ended up with an effortless BBS.

Tomorrow I will shave half my face with the Taiga using tonight's settings, and the other half of my face with my Rex using the settings I usuallu use (WTG - 3.5, ATG - 2.5).

@Clouds, I won't be selling off any body parts just yet.

I'm looking forward to your shave-off.
You do know that you are denying someone a kidney!!

Final shave tonight with the SB Taiga. As promised last night, I decoded to have a shave off between the Taiga and the Rex Ambassador. The Taiga took the left side of my face and the Rex took the right side. I started WTG with the Taiga using the 3.25 setting, and that setting felt very comfortable with minimal blade feel. WTG with the Rex using a 3.5 setting was equally as comfortable and no real problems with either razor. Both left enough stubble to require at least a second pass, although it seems that the Taiga left less. ATG setting for the Taiga and Rex was 2.5. At this setting, the Taiga was very comfortable and efficient. The Rex was as comfortable but not quite as efficient. Both razors required and XTG pass for my jaw line and under my chin area. I left the setting of both at 2.5. The Taiga shaved slightly cleaner, while the Rex did require some buffing in the areas that usually give me problems. Overall, as far as the shave went, a slight advantage went to the Taiga.

I have to admit though that if I was comparing the Rex with the OC Taiga, I think the Taiga would have won because it was definitely the more efficient shaver, better than the SB. However I had to compare similar things. 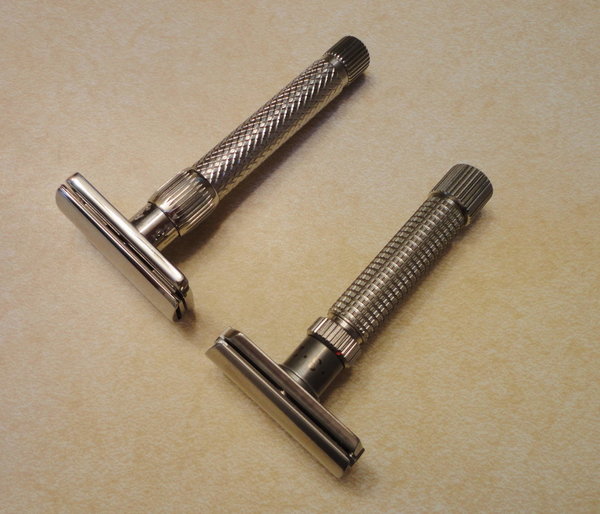 Overall impressions of the Taiga:

Pros
OC base plate is unique to the Taiga, and it is very efficient.
Both base plates are included in the set.
Finish is excellent.
Setting varies enough to accommodate many different type f shavers.

Cons
Numbers and marks on the adjuster is very hard to see.
Marks on the side of the plates are very small and need to be lined up perfectly.
The screw post on the base plate is too short, and many times the handle came loose while turning the adjuster knob.
Complete assembly/disassembly to change base plate is very cumbersome (took a while to figure out that threads were reversed).

Final thoughts
The Taiga is a very smooth and efficient shaver. It is well built, balanced, and beautifully finished.
Aligning the three pieces that make up the head is a real pain and the small marks does not help.
I would recommend machining an indentation on the sides of the base plate and a downward tab on the adjuster plate to keep things aligned similar to the Gibbs and Rex.
I think that engraving and painting the numbers on the base plate and arrow on the adjuster ring would greatly help in use.
Possibly selling the Taiga in two versions - SB and OC and putting in a compression ring in the shaft (like the Rex) just so the razor would not have to be taken apart.

At this point, as much as I like the shaves from the Taiga (especially the OC plate), it would not be on my short list of razors to get. The Cons outweigh the Pros at this point, and @Clouds, I would rather hold on to my kidneys for something better.