I now got an Imperial Razor and I've researched who was behind it.

Well, it was Adolph Köster, born 1856 as son of a Jewish family from Wattenheim, Germany. He emigrated to New York in 1870, hoping to gain a foothold in the cutlery business. There, not unusual for immigrants, he renamed himself Kastor. His uncle Aaron was already in the business and served the young man as a mentor by offering the young castor a position in his hardware supply company Bodenheim, Meyer, & Company. Kastor began on the floor - ironically - in the basement, where he was responsible for the cow chains. Over time, he worked his way up to the firearms and cutlery department. This department at Bodenheim, Meyer, & Company was a seasonal business, with July-August-September being the best time - and Adolph Kastor was right in the middle, gritting his teeth at the cutlery store. 1873 marked the year in which the company suffered the loss of one of its founders and shortly afterwards was renamed Meyer & Kastor. At that time the business was not going well, plagued by poor sales figures. Despite the difficult times of recent years, Kastor had learned a lot about running the company - from the arduous financial aspects to the complete knowledge of all Meyer & Kastor offices and everything in between. The company closed in September 1876. It wasn't long before Kastor set out to set up its own company. On 1 October 1876, the 20-year-old Kastor had his own company. Adolph Kastor & Bros. is located in a building on Canal Street in New York City and began to fulfil his founder's dreams by importing and selling knives made in Germany. Everything went smoothly until 1897, the year the Dingley tariff was introduced. This legislation was drafted to promote domestic production. Thus knives became too expensive to be imported with their protective duty on all imported steel products. The only solution Kastor saw was to manufacture knives directly in New York to keep its prices low. Kastor opened a small cutlery and hardware store and soon his brother Nathan Kastor joined the company.

In the 1880s, his two younger brothers Sigmund and August joined the company. First, A. Kastor & Brothers imported everything from Sheffield, England. In the 1880s, the Solingen cutlery industry in Germany surpassed Sheffield's efficiency and produced knives at lower cost. Kastor & Brothers began importing German products and Solingen soon became their main supplier. Nathan Kastor returned to Germany as a buyer in the late 1880s and later founded a factory, the Germania Cutlery Works in Solingen. Nathan used Swedish steel for his razor blades! In 1938, the company was left to "Aryanization".

Many of Kastor's imports were made in this factory. This company was one of the giants of cutlery imports. After all, its business consisted exclusively of supplying wholesalers. "Imperial Razor Company" was one of their first trademarks. Perhaps the most famous Kastor & Brothers trademark was the four-leaf cloverleaf.
Around 1901 Kastor & Brothers bought the Camillus Knife Company of Camillus, New York. They renamed the company Camillus Cutlery Company in 1902. Finally the name Kastor was dropped, but he is still in business as Camillus. Kastor & Brothers was in the early 1890s at 126-128 Duane Street, New York City. By 1906 they had moved to 109 Duane. In 1916 the address was 190-111 Duane. The members of the company in 1916 were Adolph, August and Alfred B. Kastor. In 1934 they were on 1239 Broadway with Alfred B. President. In 1941 they were on 245 5th Avenue. Alfred B. Kastor was then president of the Camillus Cutlery Company and A. Kastor & Brothers. Until 1946 they were at 60 East 42nd Street.
Adolph Kastor died in 1946. In 1947 the name Kastor & Brothers was deleted and all brands were transferred to Camillus Cutlery.

And now my Imperial. The backside scale is broken, and I had to put New scales on it, but first as I got it, my "Admiral Dewey", 6/8 somewhat half-hollow. 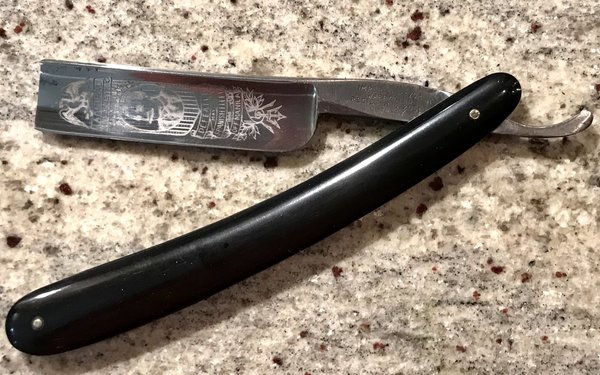 I guess it can be pretty good dated. The Battle of Manila started at the end of April 1898, but Dewey was not yet Admiral, but Commodore. After the battle he was promoted to rear admiral and already in 1899 he was promoted to admiral after jump promotion (under skipping the vice admiral). In 1903, Dewey was then retroactively promoted by Congress to Admiral of the Navy on March 2, 1899 (who was proclaimed Senior to the later Admiral of the Fleet, also corresponding to a 6-star General). So I suppose that the razor was made between 1899 and 1903, when Dewey was still very popular and you could sell it with the portrait.

As I do have neither plastic material nor the Skill to repair this broken Scale:

I removed the scales and cleaned and polished the Blade a Bit:

Then build a new uniform for the Admiral from black ebony wood and rescaled it. Looking forward to hone this next. Was to lazy today. 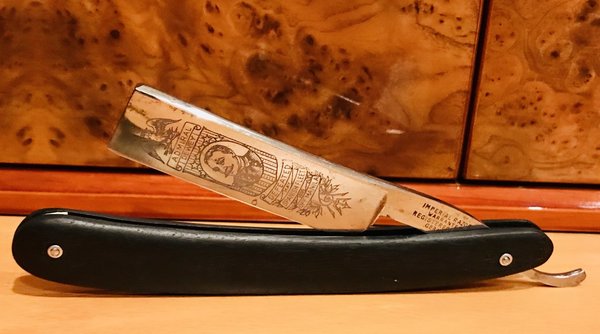 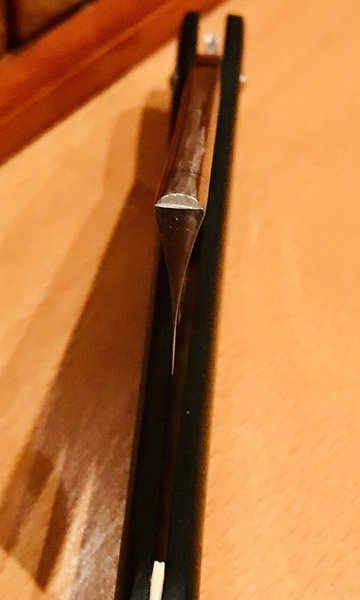 Moderator
SU-Patron Gold
Thanks very much for all research and pics of this beautiful razor!
Cheers!
Richard

interesting story, thanks
Nice work @Hellas, enjoy the shaves with it

Thanks @Hellas , I enjoyed the story and the pics!