Heres my latest attempt, a truly Coticule.be venture, both the blade and wood were a present from our very own Torben, the blade was shiny but covered in grind marks, dont know if thats how they left the Swedish factory back in the day? and the wood which came from our own Ray,was just a strip, and just large enough for this one set of scales too, so a little scary to cut, I milled and fitted the brass wedge to balance out the blade, although not huge its very close to a full wedge and quite heavy for its size, hand made brass washers, friction washers and pins hold it all in one piece, and the finish is CA glue.
Not the best of pictures and still have to wax and hone the old girl, thank you for looking and any comments make my day.
Best wishes
Ralfson (Dr) 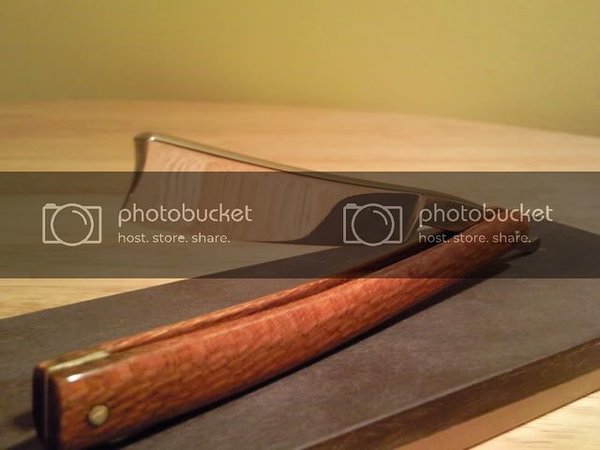 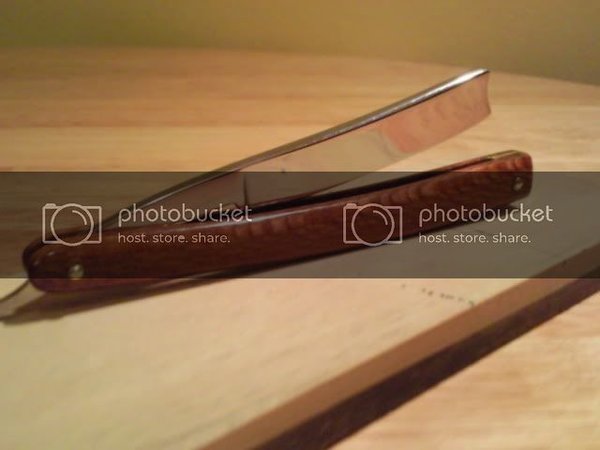 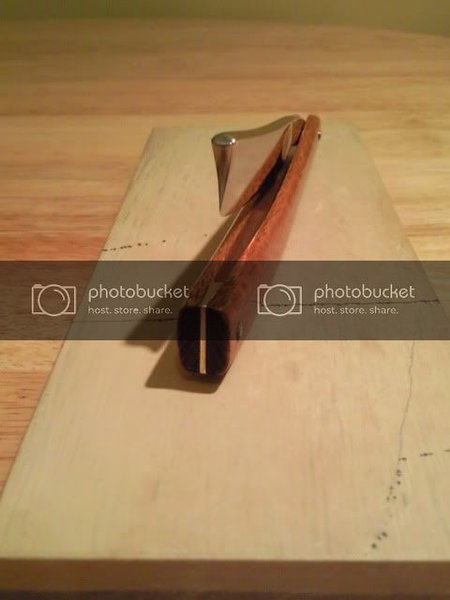 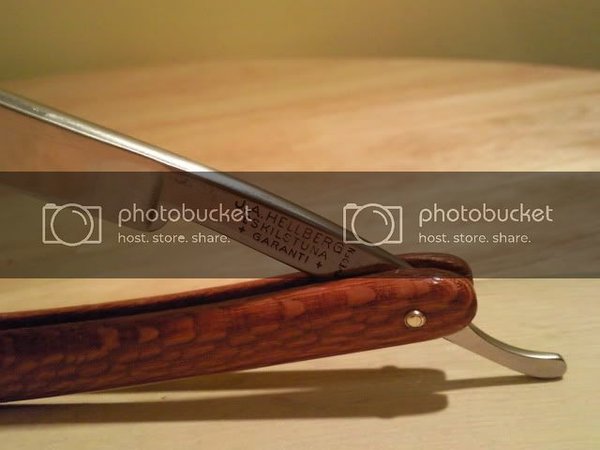 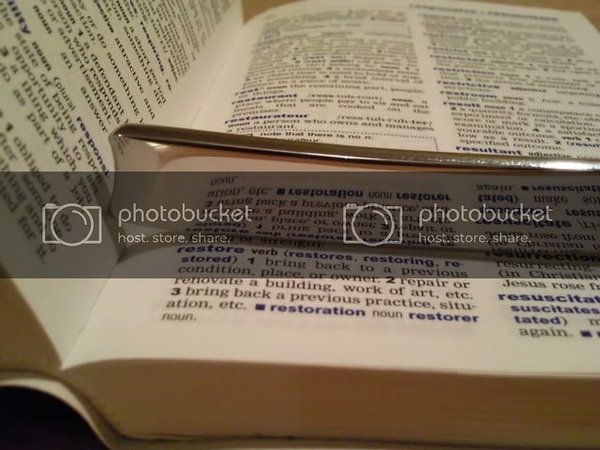 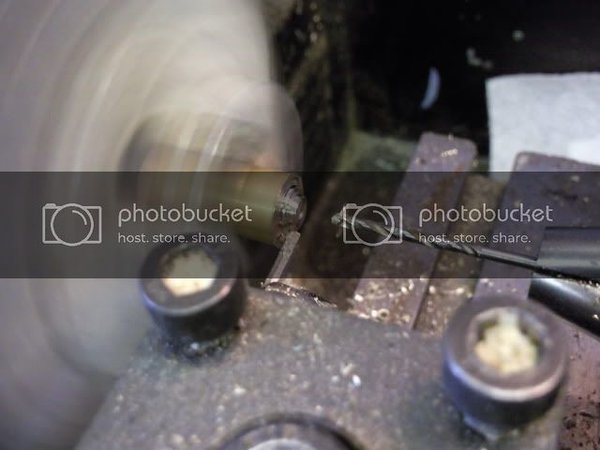 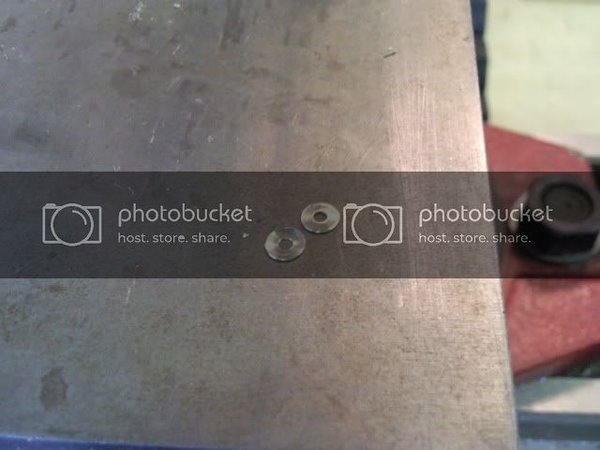 Splendid job,but allready told you:thumbup: Btw...did you take up Ray`s advice of 50/50 linen seed oil & turpentine..erh terpentine...erhh..you know.. as for bringing out the structure of the wood? That really sound very wrong,hope you got the point

That looks like a real hefty piece of a shaver, yeah! :thumbup: Too bad there are so few wedge-like blades around these days, the more I shave the more I find Wapis (the only non full hollow blades in my possesion) to be the best choice for my heavy stubble. But I should probably wait with such statements until razors honed by Ray will reach me.

Matt...you are right..wedges are just lovely shavers and I prefer them to hollows. Not that I got heavy stubbles,in fact its just the opposite,but the feel and ..sound..of a wedge cutting hair is a true delight.

Ralfy
Now you really got to tell how you made that blade so shiny!

Hm, the remark about the sound is interesting, actually I find full hollow grinds much more acoustically expressive

: than other grinds. Speaking of sound, I often wonder how it would be possible to record the sounds my razors make working with my stubble. And if it would be of any value in terms of discussing how a certain blade feels.

So we agree on that ...acoustically hollow grinds must (due to their thinner metal)work better as a resonant or loudspeaker. The thin metal must pick up vibrations (sound is vibrations) easier than the solid metal of a wedge. Now,I`ve been interrested in "sound" and HI-FI for many years..though its been given up for financial reasons- but I lack the correct technical terms to describe the experience in a understandable way...surely our hero in disguise aka. Sir Bart will chime in? He is working with this on a everyday basis..
Torbs

There's not that much to say about to sound of razors. In essence a razor acts as an acoustic resonator when it is "voiced" by rubbing over beard stubble or over the surface of a whetstone. The process is similar to what happens with a Dobro (or resonator guitar), although the resonator is voiced by strings in that case. Thinner razors are more efficient resonators. The amplitude can be larger, hence they "play" louder.

When it comes to shaving preferences, it really is just a personal matter. There is no razor "better for thick stubble". A lot of people seems to initially prefer stiffer (heavier) grinds for shaving and only develop an affinity for "singing" blades later. For sharpening,it's often the other way round, because the thin blades are a bit more lenient in taking a good edge.

There's also the aesthetic appeal of a razor, where a majority of people seem to prefer larger/beefier razors.

Lovely work, Doctor Ralfson.
Polishing job on the razor is stunning.
The shape of the scales itself leaves margin for improvement, in my opinion. It looks as if they don't taper all the way to the pivot point, but become slightly thicker at the point where they should have been thinest. Not sure I express myself clearly, here.

As I said in another thread: I'm better as criticizing scales than I am at making them myself.

Dont even go there..lol yes I should have made them a little slimmer at the pivot, but hey ho there still very pretty IMHO, and I may yet rip them down and give them a little rework :thumbup:

Stunning work Ralfy, that brass wedge is interesting (if you are one of those concerned about “razor balance’ then it should help balance the razor nicely).

Now I like my women with a little… “body” (I guess there would be more of her to appreciate lolol), but that preference doesn’t extend to scales… I like them thin. But you may also want to leave it as is… because the extra “meat” in that area may allow you to peen tightly to hold that heavy blade in place.