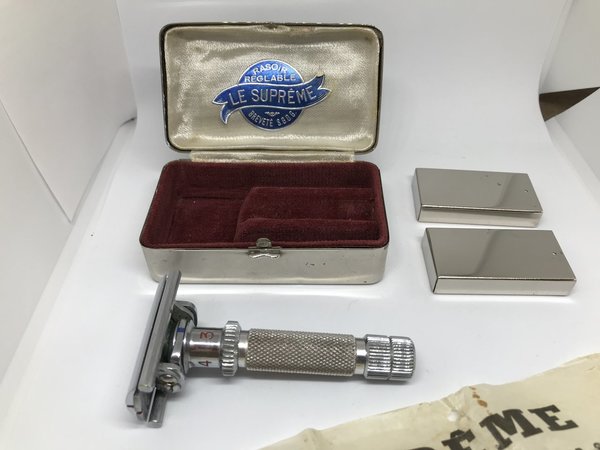 Gents, I thought I’d contribute with a rewritten description of this razor - posted earlier on another shaving website.

The L’Essor Le Supreme reglable (adjustable) is one of the more rare adjustable razors, French made, probably dating from the 1930s and/or 1940s(?). Very little is known about it, at least I had a hard time finding any info whatsoever on it when I started researching, after I had fallen in love with it’s cool old school industrial looks in a B&B thread. In the adjustable world it preceeds the Gibbs (I think) and for sure all the Gillettes.

A couple of months ago I took delivery of my own specimen, sent directly from France after I won it on the bay after one of my more significant bids - However it seemed in great condition and came as a full set even with the original manual included, so I thought I’d try to get it. And thankfully I did.

Upon receival I did a quick clean with very hot water soak, soap detergent and an old soft tooth brush. Little was needed as it only held some old soap gunk from way back. There was two moments of anxiety though, first when I took it apart and found it held a rusty old Gillette blade. But thankfully this had left no marks. And secondly when the adjustment was completely stuck... ... I took a deep breath and found a bit of oil to grease it up, and after 15 seconds of working it it came fully loose. A sigh of relief, of course, I was already picturing myself writing a HELP mail to Cap... After this it has functioned impeccably.

THE RAZOR
In hand this razor proved just as nice as hoped, in awesome condition actually. No brassing and with great shine all over. Before buying I was advised that it is all brass except an aluminum handle, and in hand this seems true. It is on the heavy side, weighing in at 88 grams, and it is quite top heavy due to the light handle and the unique 4-screw head setup. It measures 80 mm from head to toe. It is a really a sturdy beast in hand, seems unbreakable, and it is just beautiful to behold, in a manly industrial way of course.

The adjustment is infinite, as with e.g. the Gibbs and the Rex Ambassador. And interestingly the two sides are not identical but has slightly varying blade gap - notice the red and blue color marking in the pictures (under the head/baseplate). 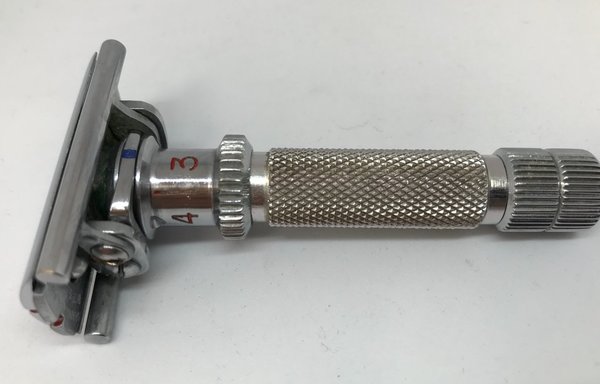 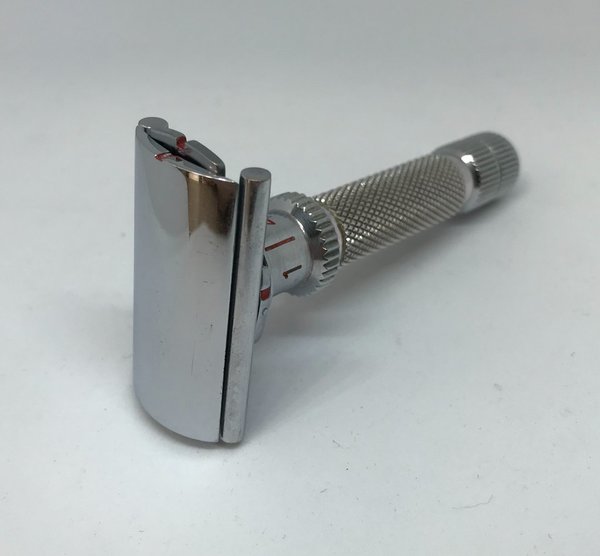 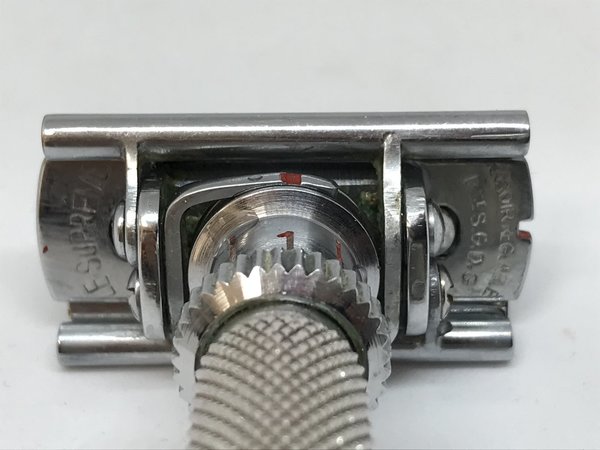 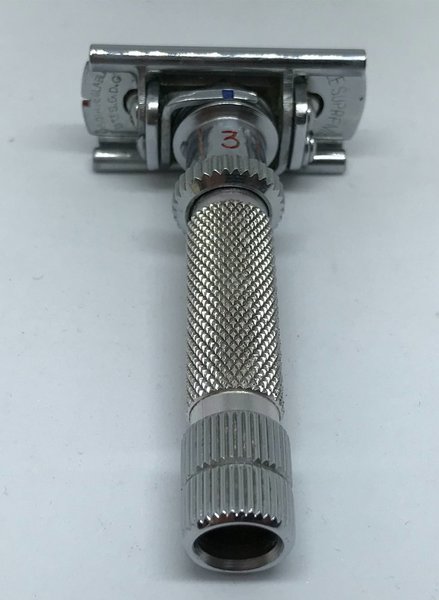 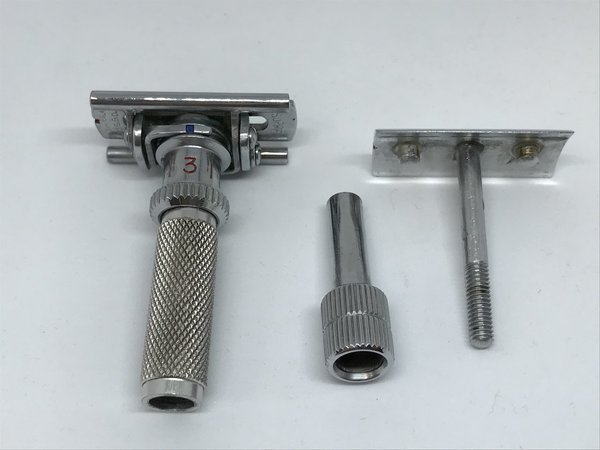 THE CASE
This case has a few outside scratches and marks from time, even a small crack but it shuts securely and evenly. The insides are simply a joy to look at, the burgundy linen is in great shape, but the real treat is the bright blue logo - in perfect shape.

The two blade banks appear to be quite standard, no marks on the outside. And the manual is really fun to have; like others of this age it is really delicate, like parchment, but it is complete and quite unique. It was unfolded with great care! 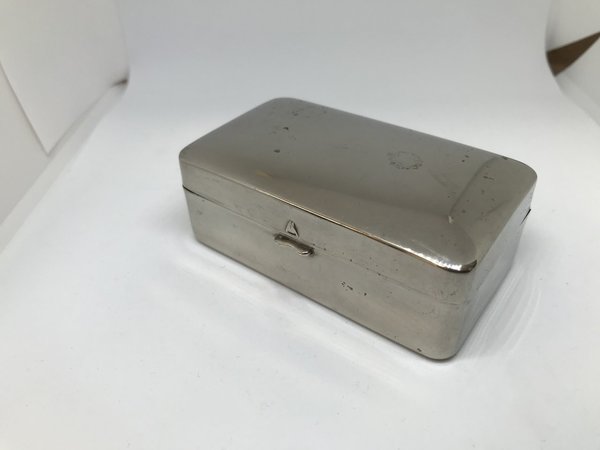 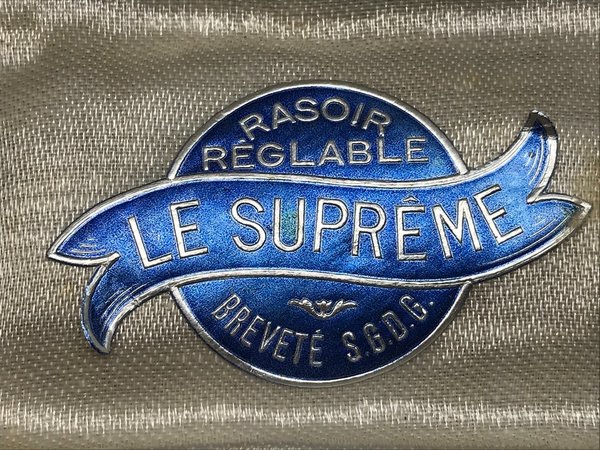 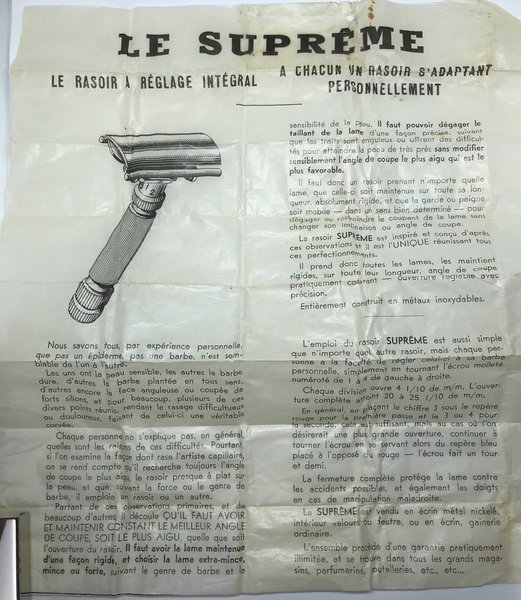 THE SHAVE
I went into my first shave with a lot of trepidation as I reached out beforehand to a French friend whose opinion on French razors I really trust. And he plainly said that he hated the shaves! Sigh, not what really you wanted to hear...

But thankfully YMMV still rules! It was a mighty fine shave, I used a brandnew Personna, set the razor on its mildest setting and took it slow with ease and care. This razor is REALLY top heavy but once you adjust for that it works very well. I would not say the smoothness matches a British Aristocrat but still very good, I really sense the round safety bars, nice.

Since acquiring this a couple of months ago I have shaved with it regularly, always with a Feather blade, it is really a fine mild shaver when kept to the lower adjustment settings. And the steampunk looks are unbeatable - it is a créature magnifique. 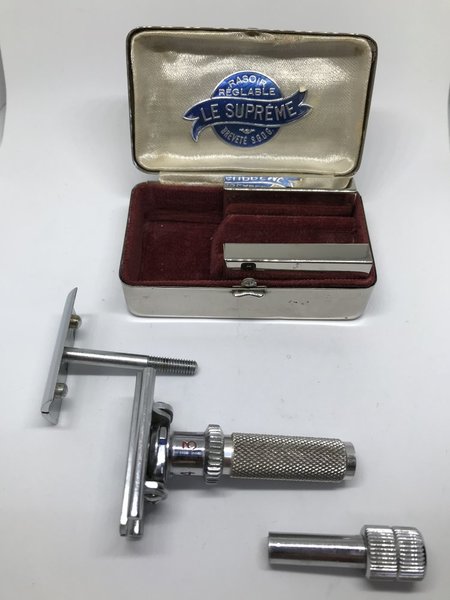 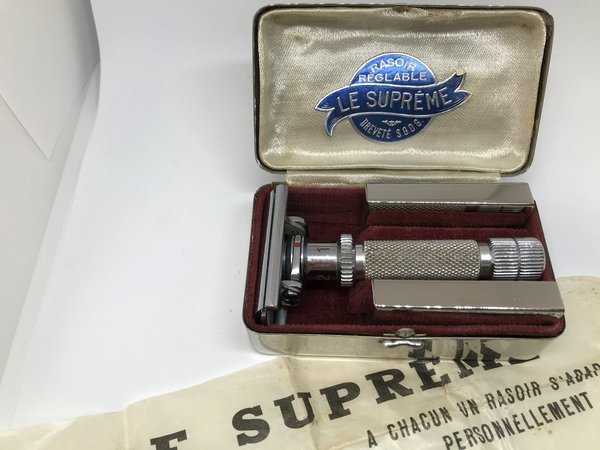 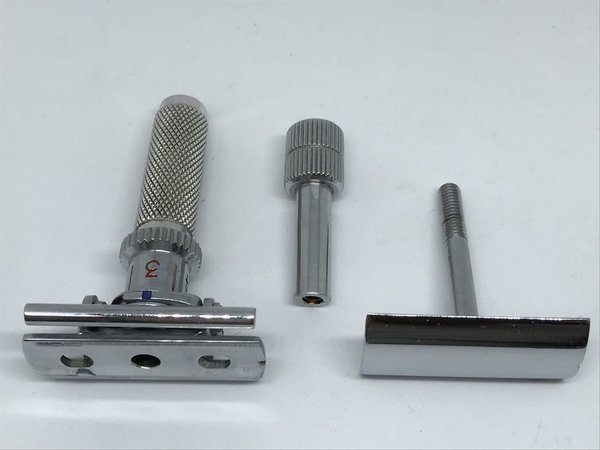 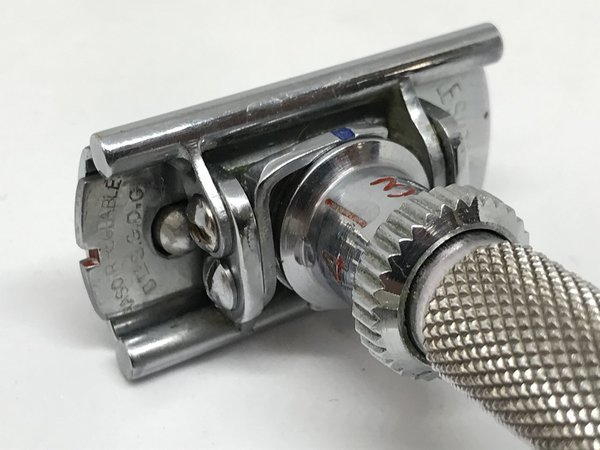 Moderator
SU-Patron Gold
Terrific presentaton of one of the, in my opinion, most beautiful razors I've seen. High on my wantlist, but most times it ends up above my budget.
One thing I never knew is that it has a differential head. That would seem a bit useless, with an adjustable razor?
Now, if someone could translate that manual
Cheers!
Richard

GREEN is the moderator in me
E

Thanks for sharing; awesome razor. I can do a rough translation of the manual. I'm neither a native french or english speakers. I'll do it this weekend.

I have two other model of essor razors; one with an old type and one with a new type head. These are moderate. I will add them to the thread.

That is a beautiful razor.

Interesting mechanicals too where the adjustment plate seems to float except for the area near the handle and the guards are tube shaped and two pieces (maybe for two different diameters of tube?).

Leave it to the French to come up with something so different and at the same time so beautiful.

Beautiful detailed description of a beautiful razor, thanks.

Thanks a lot for your kind words, everyone - warmly appreciated

This is the translation I can make. Both french and english are not first language, so I did my best, bit it will not be perfect.


We all know by experience; no skin or beard is the same.

Some have a delicate skin, another has a tough beard, beard hair growing in all directions, other a face with a lot of angles, or with wrinkles, and for others all these together. It leads to a difficult or painful shave, making it to a real chore.


Nobody can explain, in general which are the reasons of the difficulties. When, one examines the way the hair is shaved one recognizes that always the keenest angle is searched. The razor almost flat on the skin, and that, following the force or the grain of the beard, with any razors.


Following these basic observations and a lot of others it follows THAT ONE ALWAYS HAS TO KEEP THE BEST ANGLE, BEING THE MOST KEENEST, whatever the opening of the razor. One has to keep the blade rigid, and chose a blade extra thin, thin or strong, according to the type of beard and the sensitivity of the skin. One has to be able to clear the cutting of the blade in a precise way following the characteristics that tell you to be back off where there awaits difficulties for the skin without modifying the keenest angle that is the most preferable.

Thus one has to have a razor that takes whatever blade, that is kept complete rigid along the blade, and where the guard or the comb is mobile – in a way determined correct – for clearing or <can’t read the word> the cutting of the blade without changing the hook or angle of the cut.


The razor SUPREME is inspired and constructed according these observations and is UNIQUE getting together all these perfections.

It takes all blades, keeps them rigid, all along the blade, keeps the cutting angle constant – adjustable with precision.


The use of the razor SUPREME is simpler then whatever other razor, the feature to adjust to ones beard, by simply turning the nut (mollete I can’t find mollese means something like soft) numbered 1 to 4 from left to right.


In general one places the 3 beneath the red mark for the first pass and the 3 or 4 for the second. That is sufficient, but in case where one desires a bigger gap, continu to turn the nut and go to the blue mark placed opposite to the red one – the nut makes a one turn and a half.


The complete closure protects the blade against possible accidents and at the same time the fingers in the case of clumsiness.

The SUPREME is sold in a metal nickel case, lines with velvet or felt or in a case, normal (gainerie I can not find).

The razor and box have a practical unlimited guarantee, and you can find them in all big stores, perfumeries, cutleries, etc.., etc..

L'Essor knew all of this back then. The name Supreme surely fits the razor.

There is some fantastic information on this forum of unusual razors, thanks!
Practice for a Long Long Time and All Is Coming

Thanks a lot for the translation @ehv! 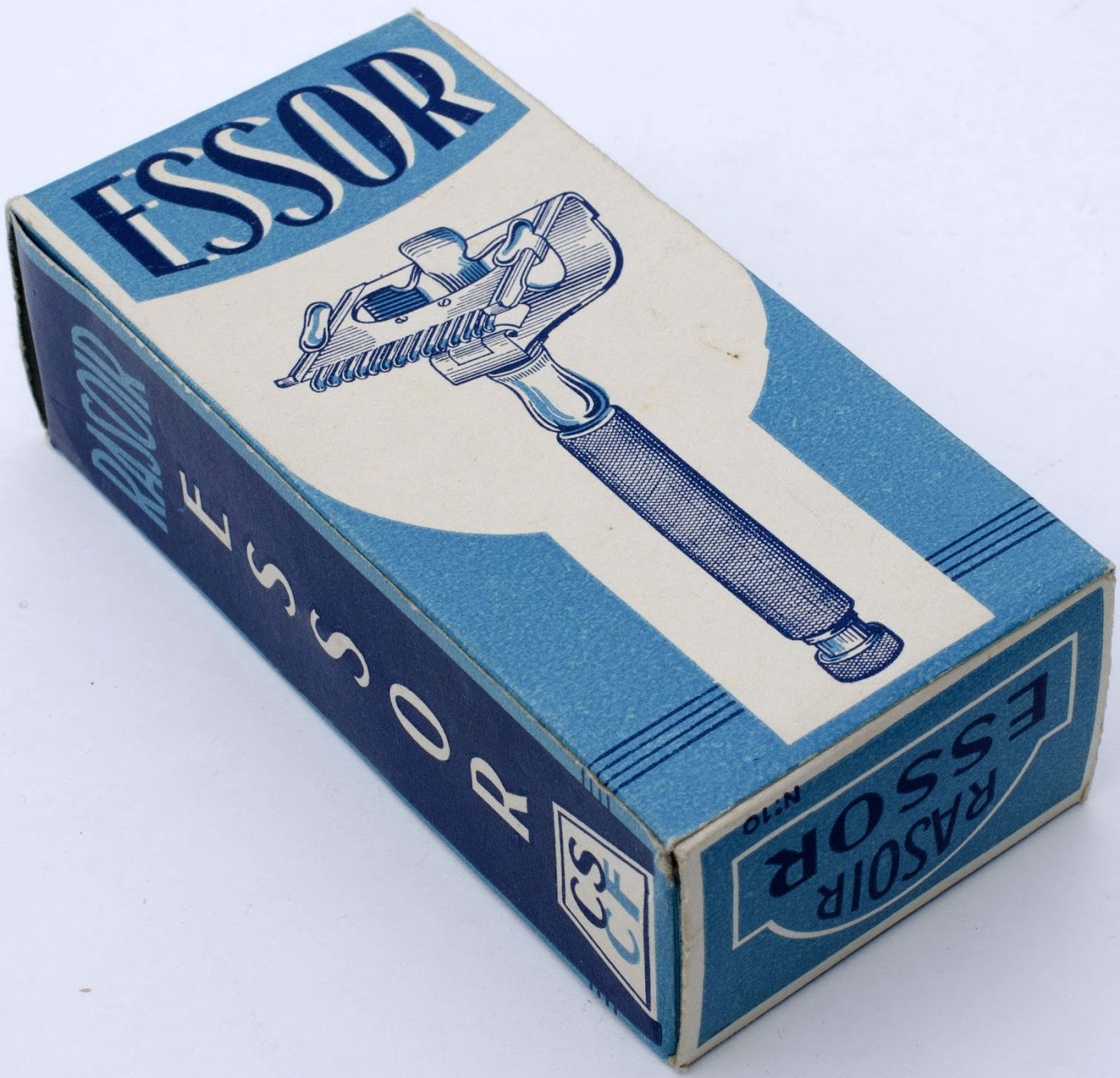 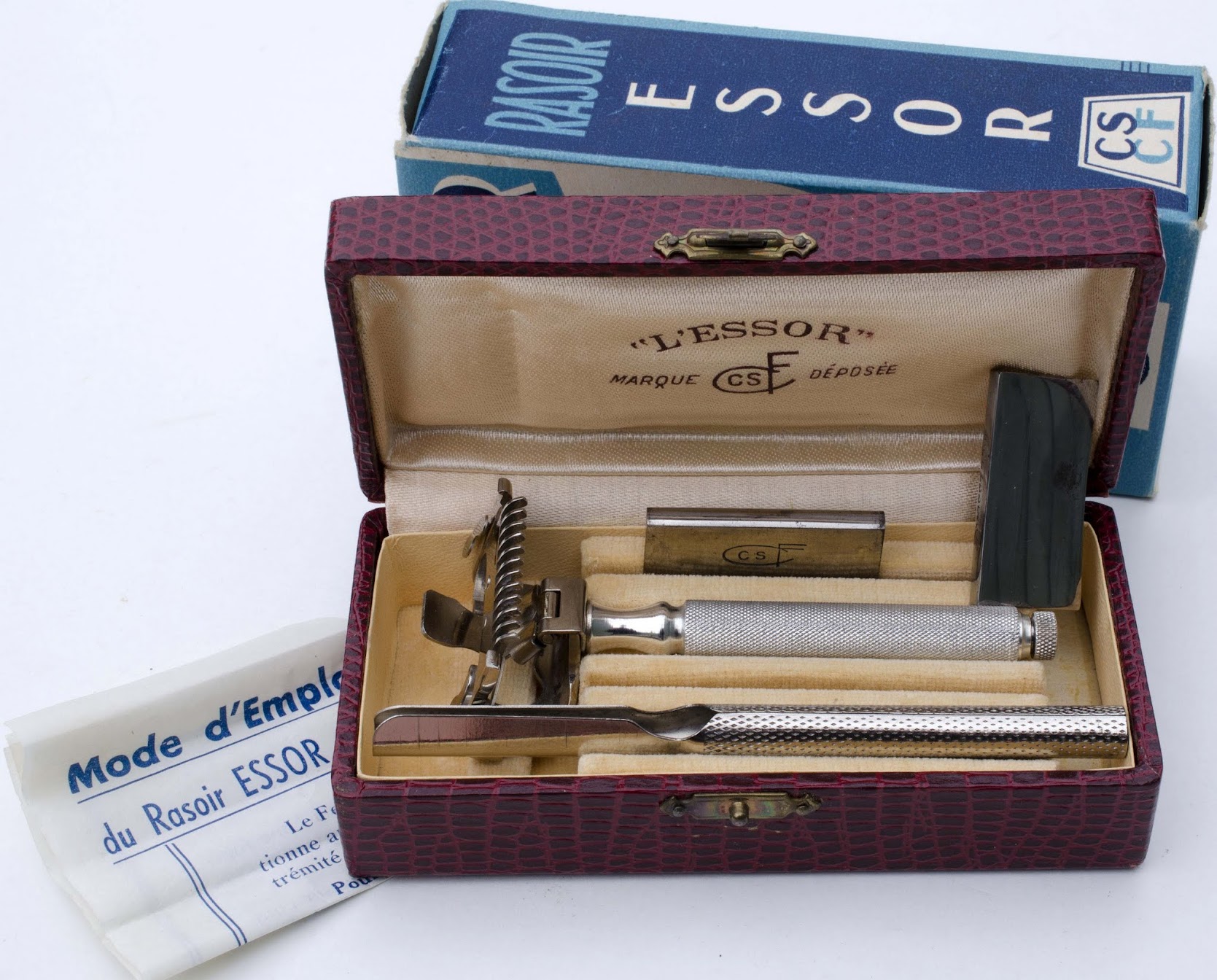 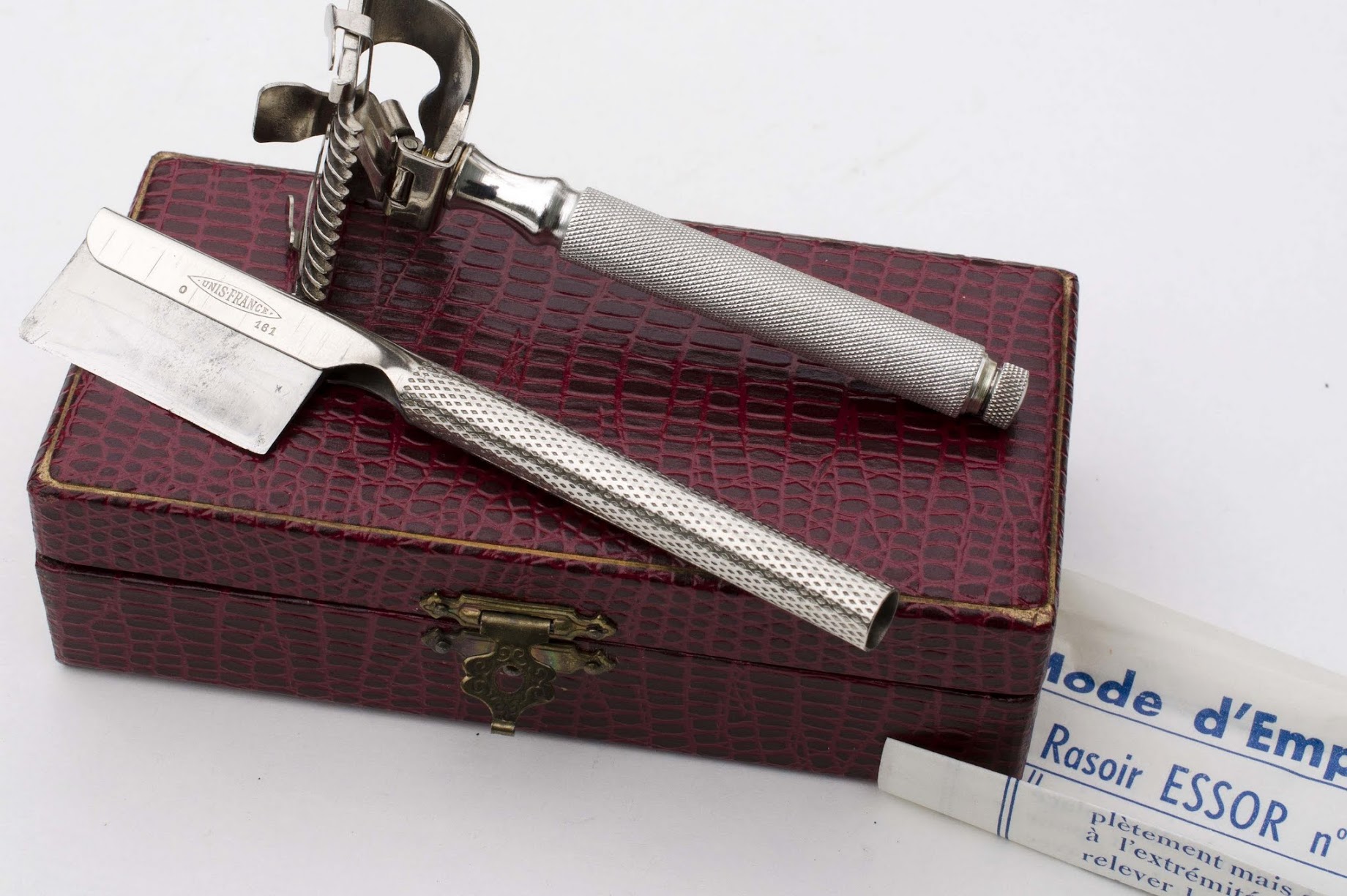 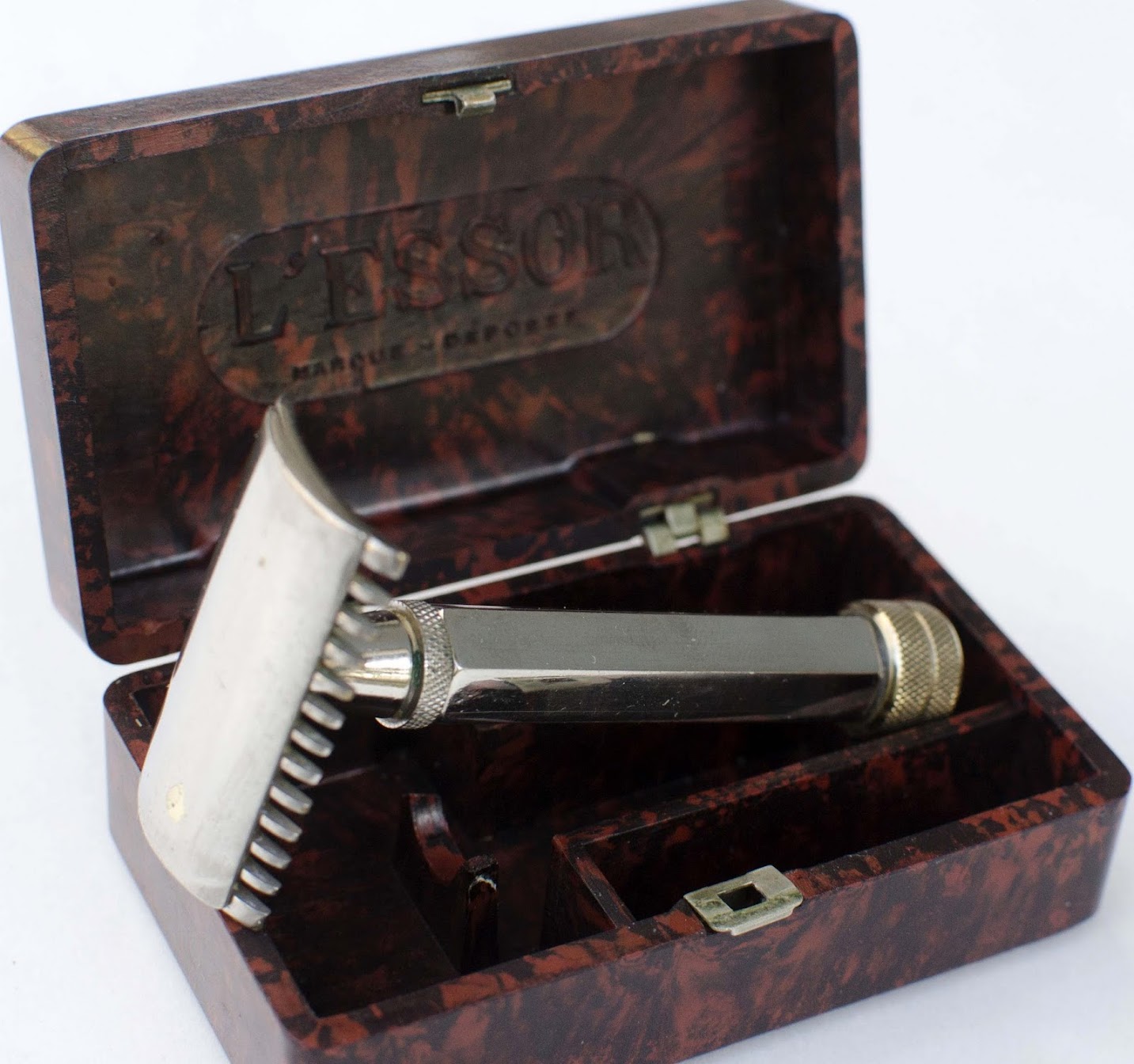 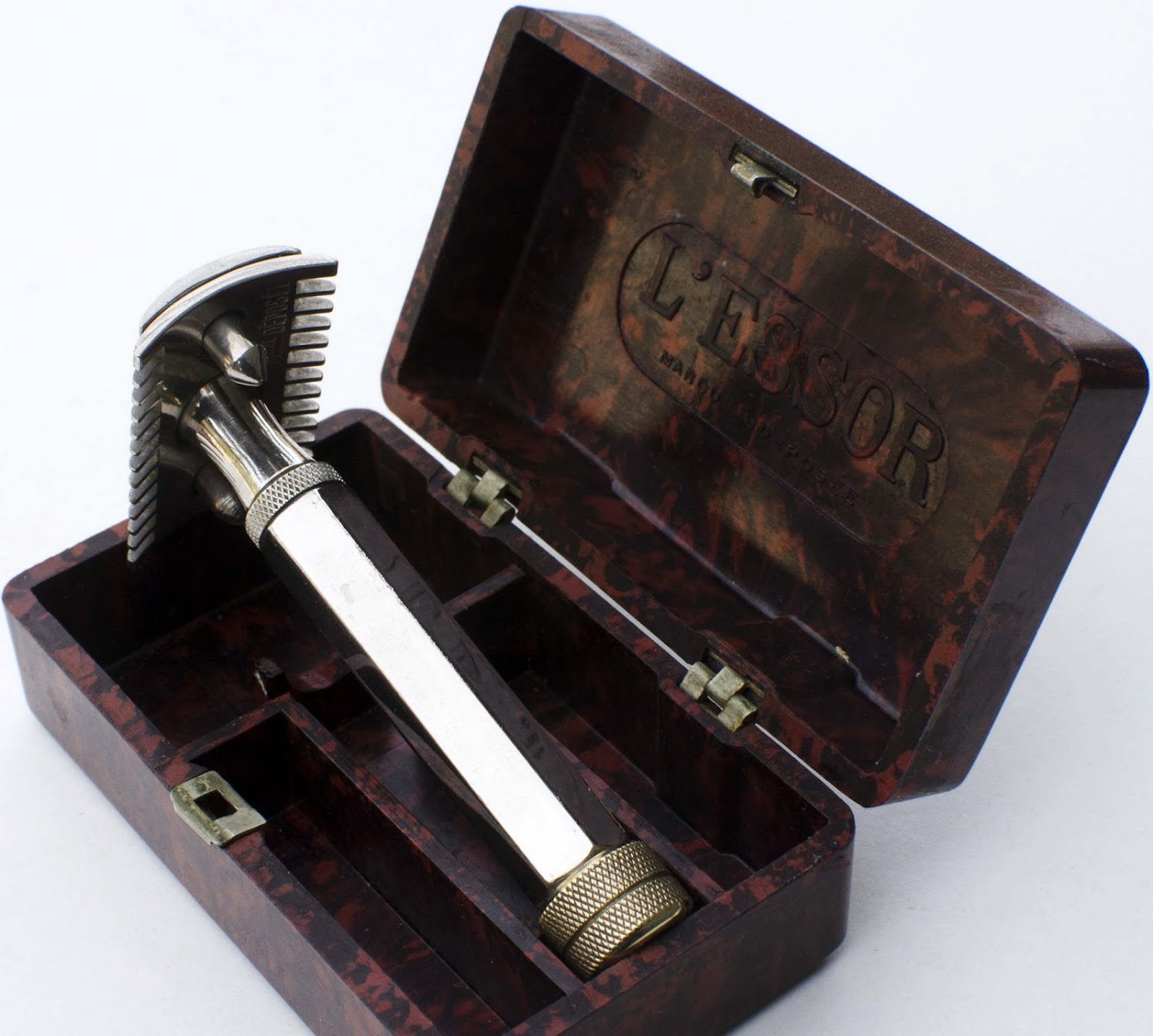 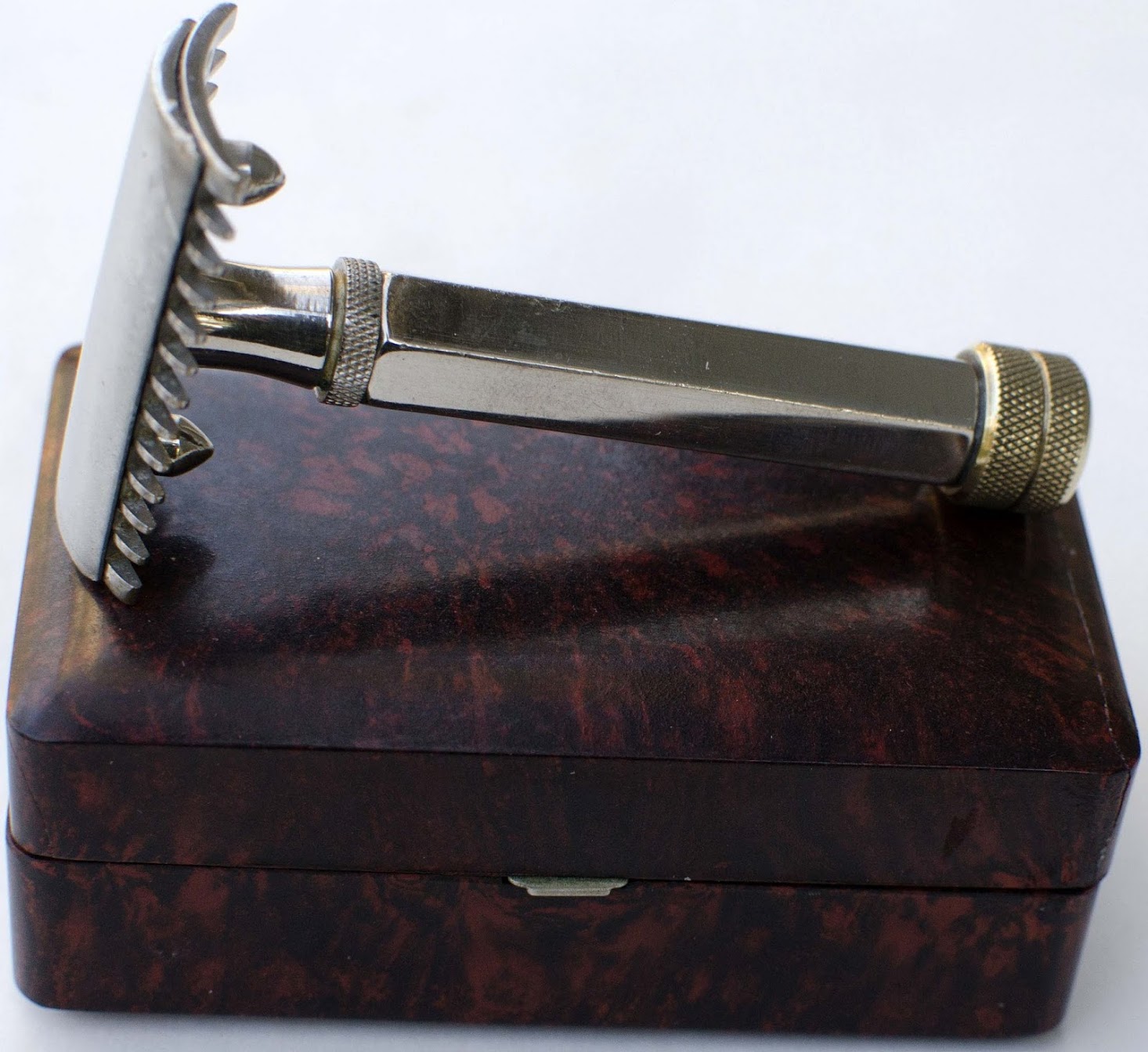 Beautiful shavers, Jake!! - And your photos are magnificent as always

Yes, very nice. The second one I have never seen before.

I also have a L'essor with an old type head. It also with a long screen, but it has a much thinner handle.

Oh, now I got meself a non-adjustable L’Essor too

Or rather, supposedly it has a differential head setup where one side shaves more aggresive than the other. So a little bit of adjustment still. Great condition in original Essor branded (but quite basic) plastic case.

Have to find out later though as it is stuck with seller in Asia for the duration until shipping lanes clear up. 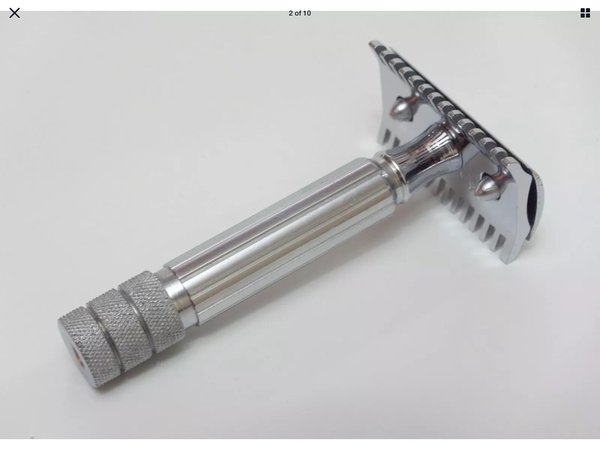 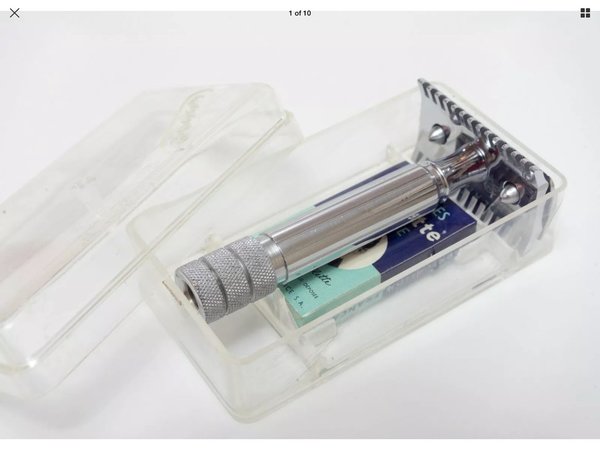 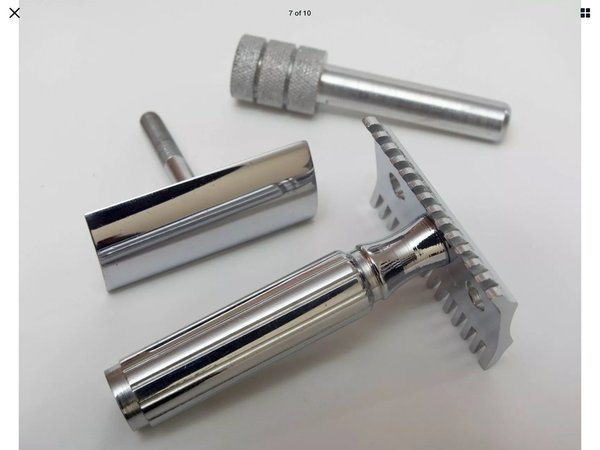 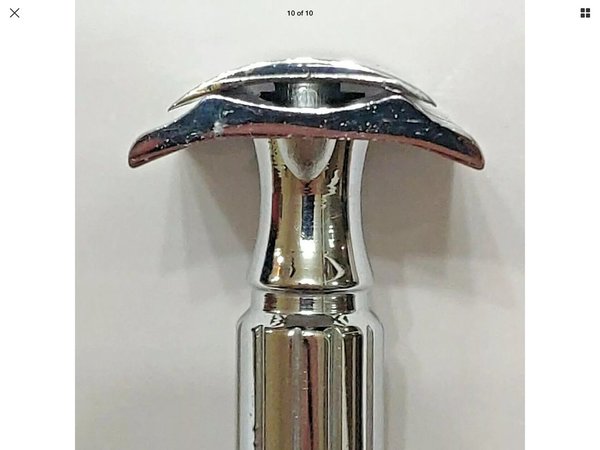 A pandemic L'Essor? We should present all the 1918 pandemic razors -- the past is present. Or our presence (presents) from the past. Thanks for the very cool ancient shaver. Very impressive.

Thanks Jake - it’s been too long, sir! - Hope all is well with you and yours! - I think you must have loads of new NOS razors to show after all this time alone with your time machine? - Please feed us!

I've been in compassionate containment all these many weeks and months. Almost decided to give up shaving -- but alas and alack...