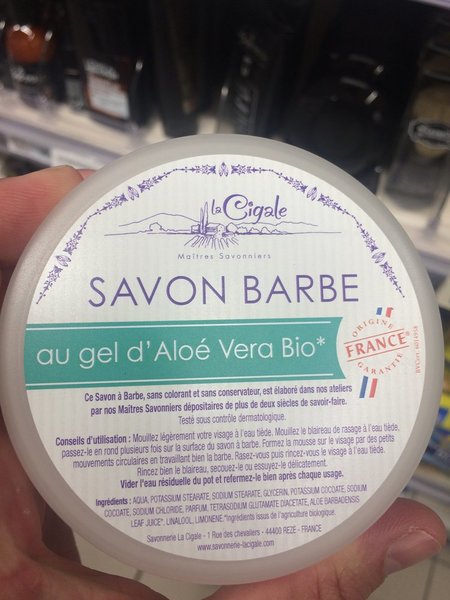 Found this. Apparently it gets good reviews. For under 3 euros!
Anyone familiar with this one?

Today I used this soap for the first time after I found it in a supermarket in the north of France. I never heard of it before. A quick google search revealed that this soap apparently got some good reviews on French fora. So I shelled out Euro 2,84 for a 150gr tub and on I went.

The soap is a reasonably hard soap. It’s not as hard as Mitchell’s Wool Fat, but not the consisteny of Proraso either.

Lathering is just as any other harder soap. Swirling a wet brush for about 20-30 seconds onto the soap.
I normally use a bowl for making my lather.
The soap can take quite some water I noticed.
Adding water drops at a time resulted in a bowl full of dense peaky foam. More than enough for 3 passes.

The one thing that struck me was the post shave sight and feel.
After shaving the lather and stubble off, the skin feels extremely soft en looks as if your face is wet. I guess that that’s the Aloe Vera?
Anyhow, I think that’s a nice feature of this soap.

All in all I think, although this is clearly not a toplevel soap, this soap performs very well especially regarding the low price.

If you might come across a tub I would definitely pick one up.

I also bought the soap last summer when on holiday in France. I have only found it in the Vendee at the hyper U and super U markets.

Have you used it already?
E

Yes, once or twice on holiday. But that was at a camp site. I'll use it tomorrow with my M-keramiek scuttle.

My thoughts were a nice soap, but nothing spectacular.