In my last trade with an unidentified razor enabler that occasionally shows up on this forum (like 24/7) I also received a tin of Le Pere Lucien Abricot shave soap. The tin had about 25% left in it, but because it was the massive 200g size, 25% is almost a regular size shaving puck from most vendors.

I lathered it that night and found that it was probably the most balanced shave soap I ever used. It was easy to lather, the scent was very noticeable and pleasant, the lather was very slick and it had great post shave feel.

When shaving, I found that the razor just glided over my face without effort and I could do dry buffing and touch up because the lubrication lingered afterwards. The scent very subtly lasted a while after the shave. I found, in subsequent shaves, that there were two things that were not quite perfect. First was that the scent was one dimensional - apricots (although it was a very natural apricot scent).

The second was slightly more important and that was that although this was a thirsty soap, during bowl lathering, it could break very quickly. I went from the perfect lather, added just a couple of drops of water, and suddenly the lather came out foamy and light. Nothing that loading the brush again for a couple of seconds didn't solve.

After a week of using the Abricot more times than any other soap in my rotation, I decided to just look at who carries the soap and how much it cost. I found that one scent that was not easy to find was the Oud-Santal, which combined two of my favorite soap scents. When I found an old but unused tin of it on eBay, that was when the Jedi voice told me to get it and so I guess with this social distancing regulation, I wasn't planning to fill up my car with a tank of petrol anytime soon anyway.

Tonight I used the Oud-Santal and found the scent to be very strong and complex, which I liked. Lathering was easy and the lather was even slicker than the Abricot. I found that I could actually apply some pressure on the tough areas of my face without worrying about irritation or weepers. Face feel later was excellent and the scent still lingers as I write this nearly two hours later.

For the longest time, I never considered buying a $40 tin of soap, and I am certain that a lot of the cost came from packing so much soap in one tin. Why Le Pere Lucien insist on packing their soaps into 200g tins is a mystery to me. Between my two tins, I have enough to last me for many years, and if I had children, I could probably pass it on to them so they could pass it on to their children. Something this good should be packed in 80-90g tins so folks would buy more different scents to try out. 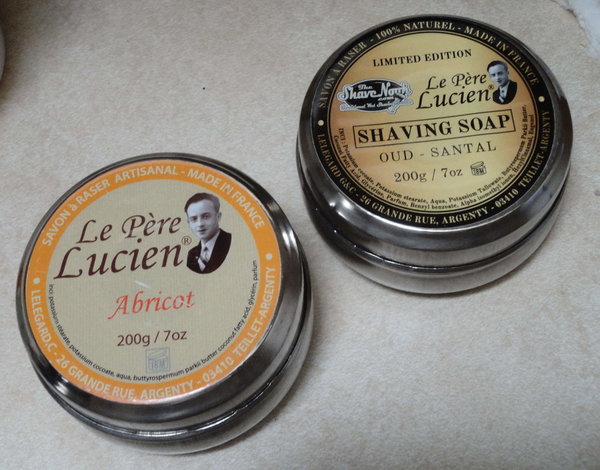 SU-Patron Gold
I have ambivalent feelings about the LPL soaps. I have and had several soaps including the Apricot, Traditional, Rosemary, Old Neroli and Rose du Pushkar.

Especially the strength in the fragrances both smelling of the pot and layner I find striking.

For example, the Apricot had almost no smell in the lather while the Oud Neroli remains quite strong in the lather.

With the Traditional I got a slight irritation on the skin while that is not the case with the other soaps.

And the foam is of varying quality but that said he has a few pearls and for me these are mainly the Rosemary and the Rose du Pushkar.

The Apricot would be as well because smelling the pot I find this a lovely smell but it is so disappointing that foamed up the smell almost disappears completely.

I have over time ordered several of these and found that the smell of different batches is rather great, so is the way it lathers up. That's why I don't own any LPL's anymore. When they are good they are great, other times not so much.
Practice for a Long Long Time and All Is Coming
You must log in or register to reply here.
Share:
Facebook Twitter Reddit Pinterest Tumblr WhatsApp Email Share Link
Menu
Log in
Register
Install the app
Top