Old book: “My razor and shaving tackle!” by John Teetgen

One of the wonderful features of having access to a global information system is that a large amount of vintage depilation related publications is available that I would not otherwise be aware of. Or, in simpler terms, there is a lot of old shaving pamphlets found on the web. And today I want to share one I found on the internet archive. The full, complete and unabridged title Mr Teetgen gave his masterpiece?

My razor and shaving tackle! As it ought to be: and as it ought-n’t. How to shave without great pains and little cuts. 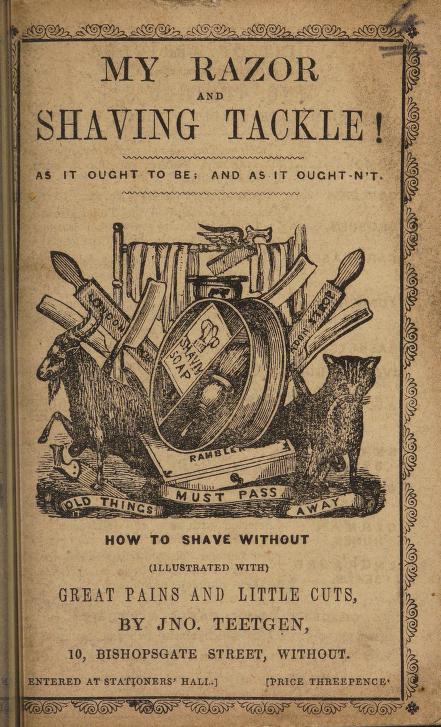 The frontispiece of My razor and shaving tackle! by Mr John Teetgen​
Dating from March 1845 – that is one hundred and seventy six years ago – the short book claims to not treat the material in a pompous declamatory way. With the benefit of one and three quarter centuries of hindsight though… it has pretty flowery and overly elaborate language. Preferred styles and presentation changes, but a lot of the points made still is good advice. The author was Mr John Teetgen, a comb and brush maker operating out of Bishopsgate Street in London who was also the exclusive supplier of the Diamond-Edge Unpolished “Tally Ho!” Razors.

The booklet is equal parts a manual to razor maintenance, shaving advice, and advertisement for the author’s shop. In particular the author wants the reader to know about his Diamond-Edge Unpolished Razor – of which he claims 1500 sold without a single return.

Early on Mr Teetgen goes into some depth as to why a razor is not a saw. It ought to be obvious to us today, but according to the booklet it was not uncommon back then to work the razor back and forth to saw through beards. Let us just say that I’m not entirely convinced the author is entirely truthful as to how common that belief was… He spends quite a lot of paragraphs – with illustrations – to show that a saw and a razor is two different things.

He also points to things that were – he claims – both generally believed and correct, such as the fact that a warm razor shaves better. This fact is, he asserts, due to the skin not recoiling from the cold blade.

Mr Teetgen seems less interested in spending time talking about the art of shaving, claiming that it is a simple operation. Despite this, he does give some advice on soap and brushes. It is quite obvious that he preferred badger* and talks down boar bristles. The face must be clean, he points out repeatedly, and he advises to cut the beard in certain directions and strokes. 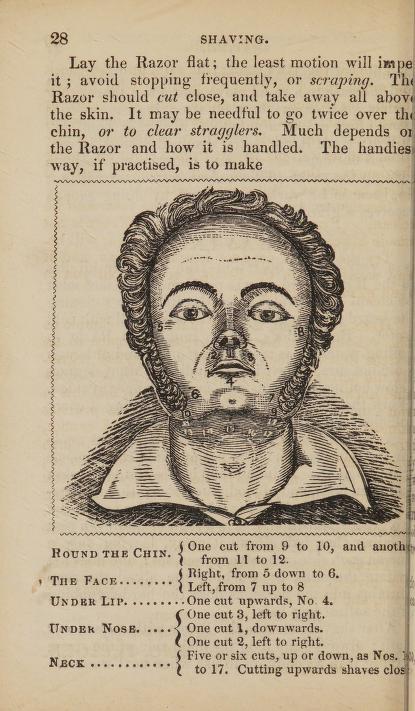 The direction of shaving strokes, as advised by Mr Teetgen​
All told I can definitely recommend taking the time to read
Please, Log in or Register to view URLs content!
. It is not very long, just 34 pages, but even if you don’t find it informative it is amusing.

PS: if you enjoy shaving history and old books, I would also recommend
Please, Log in or Register to view URLs content!
.