I am chumming the ocean once again to get the big fish to show up. This razor was introduced to me a couple of years ago by one particular big fish, and I have always come up short in bidding for one when it came up on an action site. Eventually I gave up finding one and recently one appeared and I was able to get it for a reasonable price.

The Pacific Razor Company was based in California, and this particular razor was made in the 1940s. I am not sure if they made any other razors, but for it's time, it had a bunch of unique features all rolled into one razor. First of all the guard were two plastic rollers that did not have teeth like the Roller Guard or the Worlds Finest. Secondly, one roller was colored and the other clear meaning two different levels of aggression. Thirdly, the head was mounted on a ball and had the ability to pivot so you could use it as a diagonal slant razor. Finally, the handle was thick but had a cap on the bottom so you could store a styptic pencil in it just in case you got a nick, which with all the different features, it would probably have been easy to do. 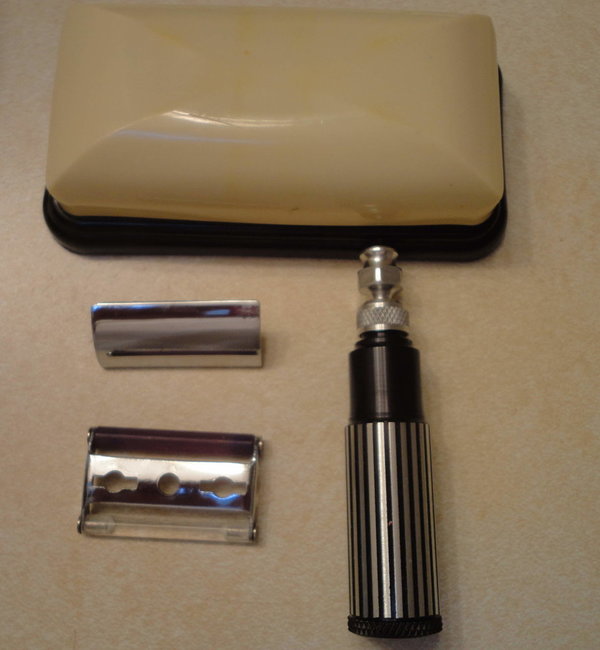 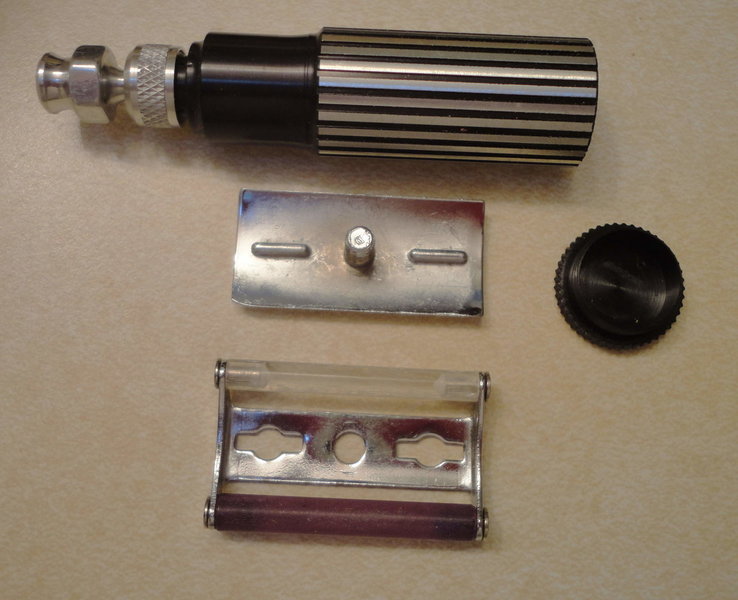 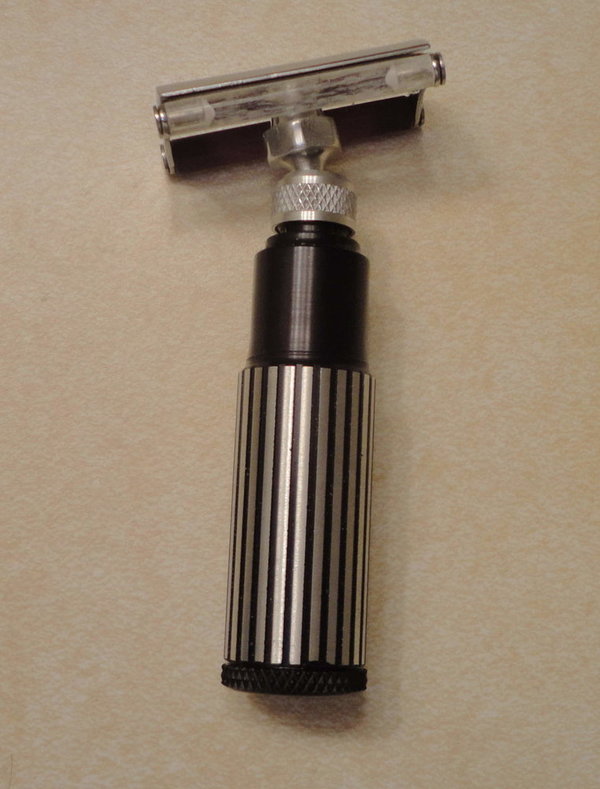 My razor came with the bakelite case, but unfortunately was missing the instructions, which would have been an interesting read. In familiarizing myself with the razor, I found that loosening the head so it could go in different angles was a challenge. The handle itself was made of plastic and so you needed to be careful not to cross screw the lower collar when loosening and tightening it, and you also had to be careful to not tighten too much because you might strip the threads. Even when tightening the head fully (either straight or at an angle), there was always a small bit where the head would still be able to move. To change the blade, one would have to grip the upper hex nut to unscrew the head and tightening it. If you grab the lower ring, the whole head would move because of the ball it was mounted on.

Tonight I decided to shave with the head in the straight position just to familiarize myself with the razor. I started off on the clear roller side which appeared to be the more aggressive side. WTG pass went very well and I could feel the blade, but the roller just made things glide along as if there were no guard. This felt equivalent to a mid aggression razor. For ATG, I switched to the dark colored side and it definitely was the mild side. I could not feel any blade and the roller made it hard for me to adjust to find an angle where it would do more than move the lather around. Finally I did find an angle and, with some effort, I did manage to finish the ATG pass. The mild side felt more like shaving with your mildest razor and then forgetting to put in a blade. I did need an XTG pass for most of my face , and for this I went back to the clear roller guard side and finished off with a three pass BBS.

Tuesday is my slant night and so I will give the Pacific another try using it as a diagonal razor. Although this is not my best shaver, it is one of my more interesting ones.

Moderator
I, too, have a Pacific razor. In fact, I have two. I have the one shown in this post, which has the same case @gvw755 shows, yet a razor with a metallic blue handle, and I have the one @gvw755 shows, in a case that has black and cream inverted, so a cream base black lid. Both came with paperinserts, showing the one I show here is the model 300, and the other one is the model 100. Basically the same razor, except the 300 came with styptic pencil, the 100 with nailclippers. Both came with a pack of Shelby blades.
Not much can be found on the Pacific Safety Razor Company, but a small clue comes from the insert: Los Angeles 27. This 27 should be a Postdistrict, which were introduced 1943 and replaced by zipcodes 1963, so we at least have a timeframe within which these were produced. The styptic pencil coming originally with this razor came from Chex-It. That was produced by Styptic Products Co, 504A No. Everett St., Glendale, California, with Glendale apparently a LA-suburb with Postdistrict 27.
As for screwing too tight, ruining the threads: I needed a pair of pliers to unscrew the lower collar when it frst came to me. 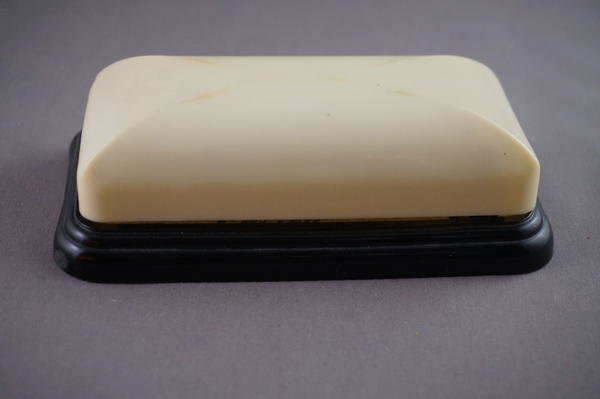 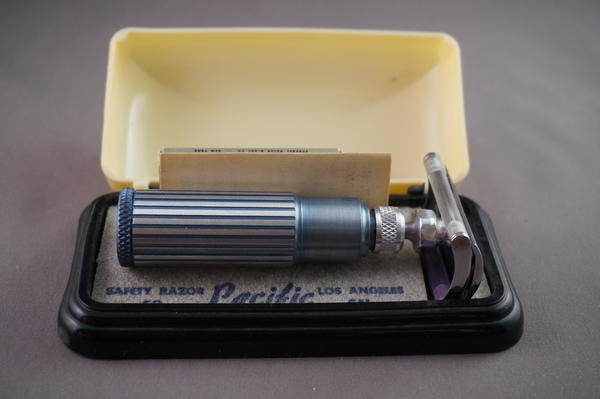 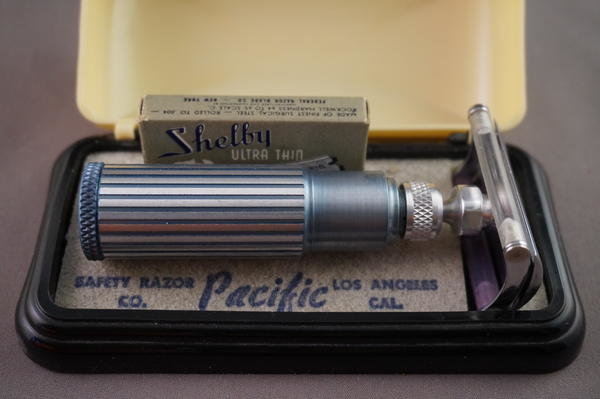 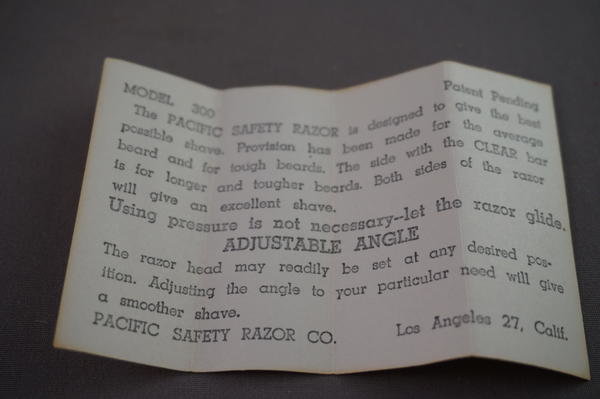 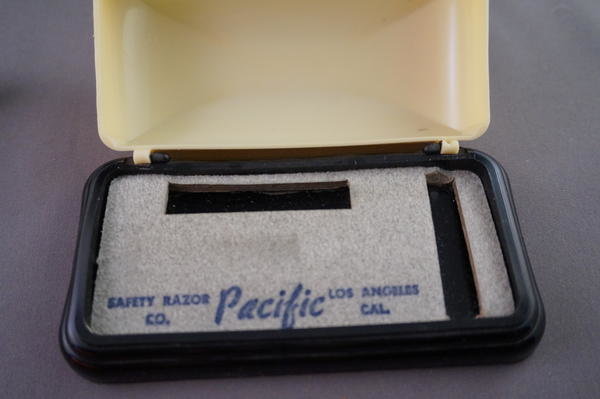 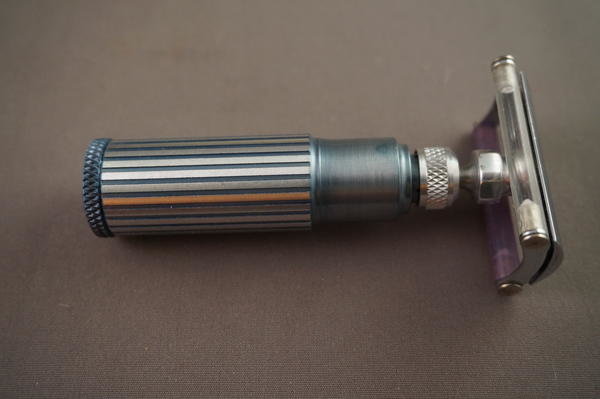 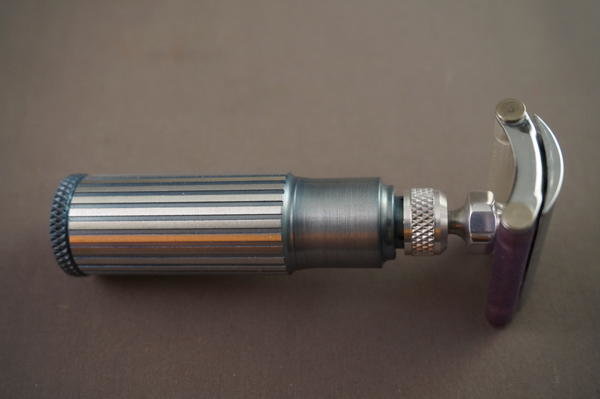 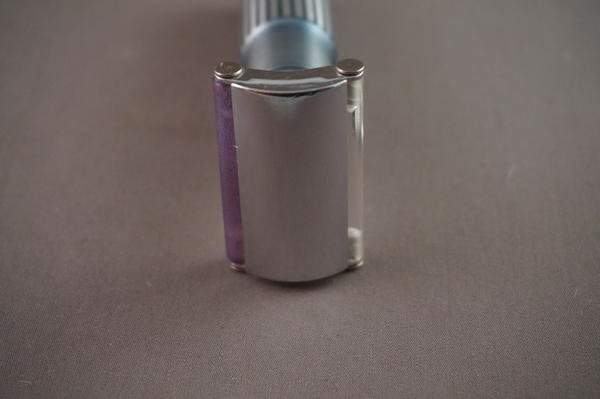 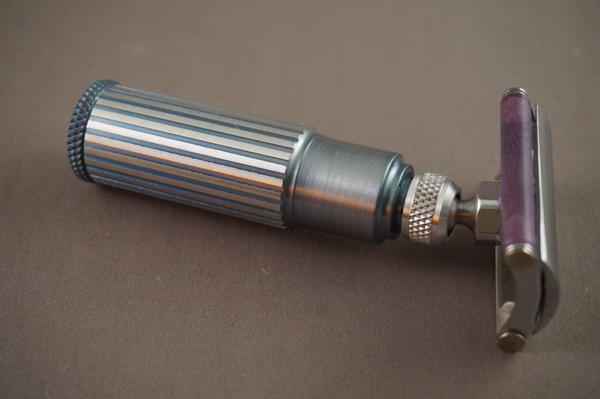 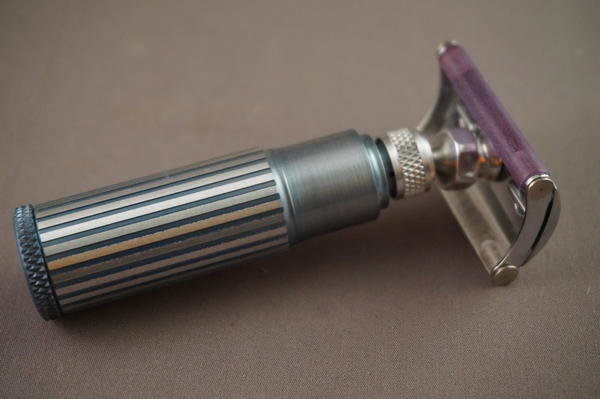 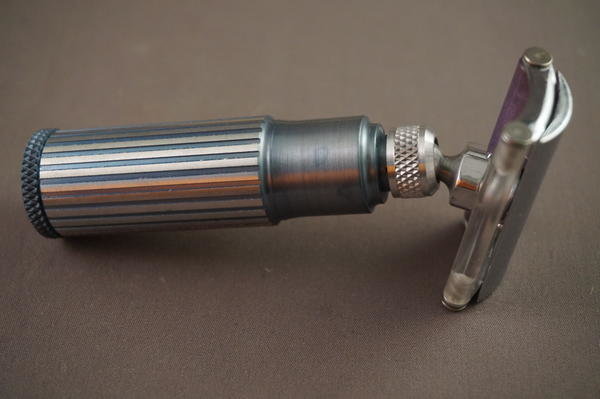 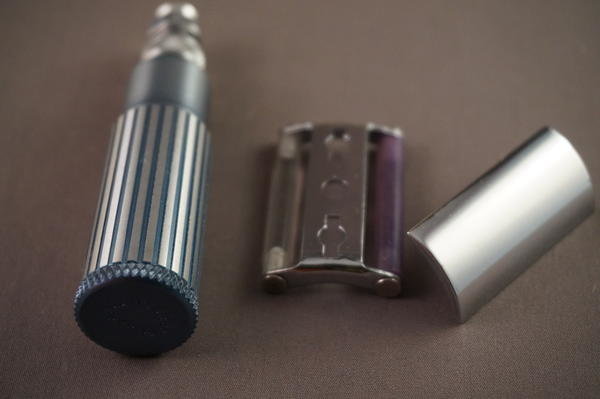 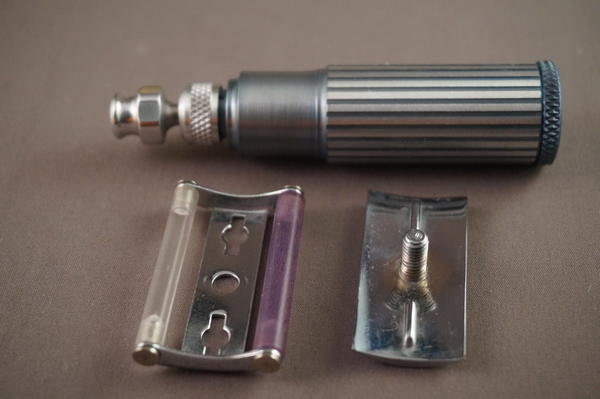 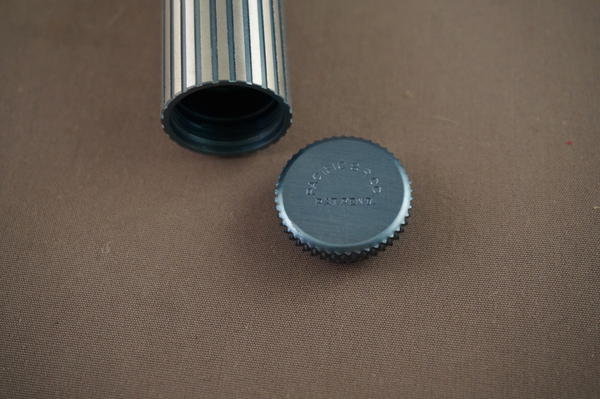 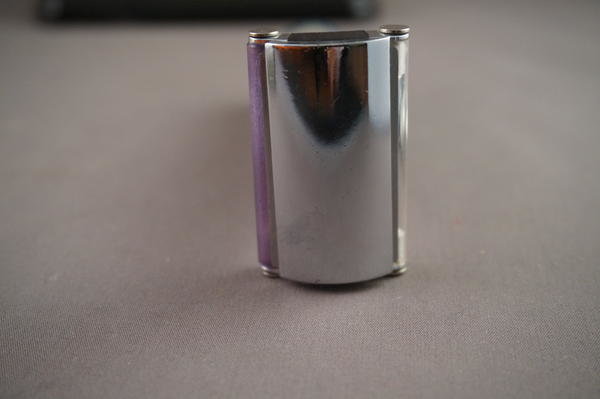 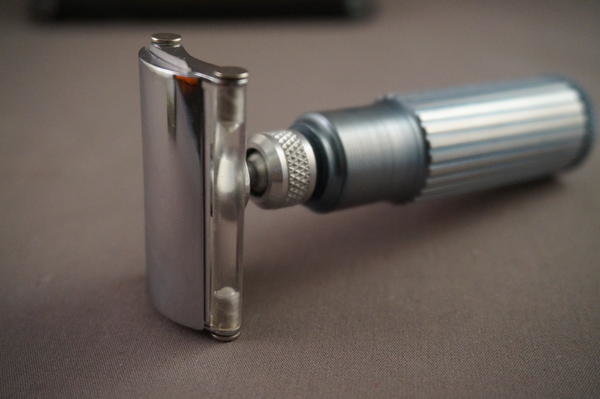 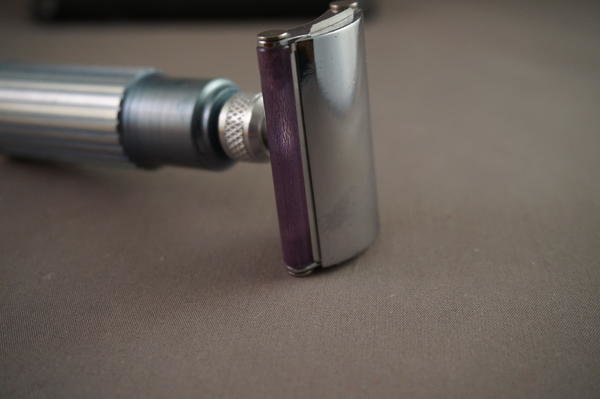 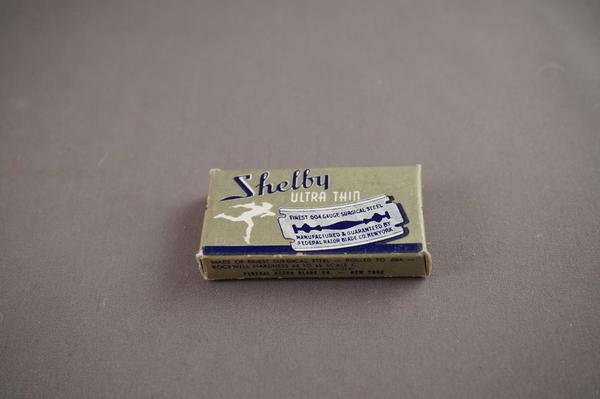 This is the version with the nail clippers. They are attached inside the handle and are a bit awkward to use. 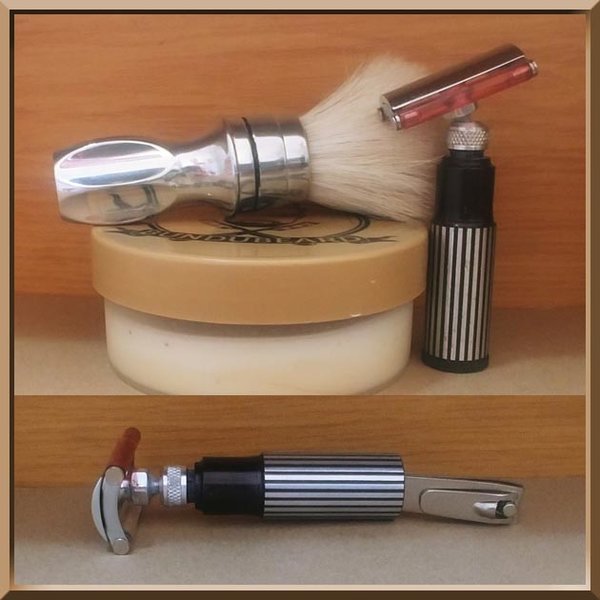 Odd, but if they are attached, mine did not have the nail clipper. then again, while adjusting the head one day, the piece inside the handle at the bottom of the part that rest the ball fell out and I had to struggle to put it back in place and then flow epoxy down the handle to glue it back into place. The ball assembly has not fully tightened since then. 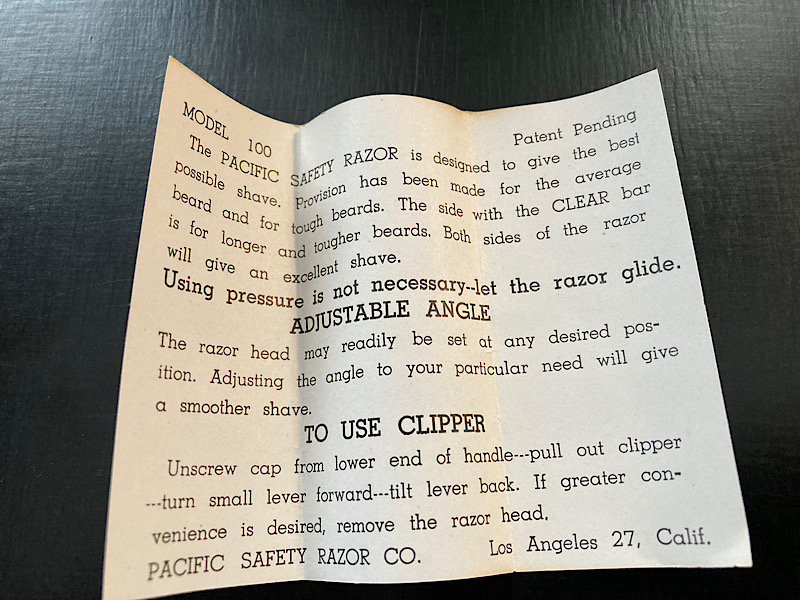