[original text edited]
The razor pictured below appears to be shortened, or is it not? That question is the topic of this thread.
[end of edit]

Actually Scott I'm not sure that particular model is shortened. I've seen several of those models (in the yellow celluloid scales vs. the faux tortoise scales) that have a cutting edge of 2.75". I could be wrong on all this and an overhead view of the razor closed would show undoubtedly if they are shortened or not. But, this isn't the first one I've seen look exactly like the one that sold.

I looked at other high Class 91 and none of them have the etching so close to the toe. I added a side view pic and you can see there clearly extra room in scales at the toe.

Yeah that looks to be shortened from that second pic. [part removed by forum moderation]
G

I'm sure thats nice if your a member and aware of it but but not everyone has access to it nor does it come up in a general online search.
G

Unlike, say, B&B (who seem to be having trouble running their forum software, again), SRP has no restrictions for non-members (with few, non mission critical exceptions like the general off topic discussion forum for obvious reasons). So, everyone has access. Why it would not show up in online searches is beyond me. Try this:
Please, Log in or Register to view URLs content!
.

Thank you for your input Robin and I'm sure everyone appreciates knowing they can now turn to you for help when their searches are fruitless.
G

That is me playing devil's advocate. I can't see myself ever coming into such a nice looking vintage razor
W

The profile of the toe sure looks different than the example on SRP. Looks shortened to me.

I would presume a potential byer of such a razor would have some knowledge about it`s condition and will be able to judge it fairly good,though there are few pictures.

It is what it is, but I'd bet 10, hell, 20 beers that it was chopped. You see, old masters had a taste of balance and proportion. Anyone with just a pinch of these will see the lack of proportion about etch placement, period. Not to mention the radius of the point rounding, which is indeed much bigger than usually, which makes the point looks really awkward. Show me any of the Revisor stuff, that looks like this, hello...

But aren't internet forums essentially about beating dead horses? Now, where is that electric cattle prod...

Ah, yes.
Please, Log in or Register to view URLs content!
- a comprehensive guide by Bill Ellis. And, behold!, it says:

At the end of the day, I fail to understand the sense behind threads like this. Let me try to summarise how I see things:If you are in a position to invest USD 300, you are probably beyond the mental stage where you need to be protected from the world's evil. But, well, some people only learn through pain, and eBay is a fantastic place for them. I cannot even remember the last time I bought a razor on eBay (except eBay Germany). And yes, there are seven reasons for that.

I do know if I was spending that kind of money I would do my homework first, a fool and their money as they say.......

Gentlemen, I have come out of hiding to shed my views in this interesting thread…

1) Manufacturers spend quite a lot of resources in the design and cosmetics of a razor… because their bottom line depends on it. Now while we may expect a “standard” model to have a few cosmetic flaws, it is highly unlikely they would allow out the factory a “hi-end” unit with a misaligned etch and such an "amateur-ishly" ground rounded-point.

2) Bear in mind that the razor in question is supposedly 6/8th wide, however if you look carefully, the blade has the proportions of a 7/8 or 8/8 blade, this is a dead giveaway that the 6/8 blade has been cut short:

Original article can be found here:

4) Now here is a photo of the razor in question set against known 6/8th razors… the photos have all been resized to approximate the same blade width (the other two were conservatively resized to give the blade in question the best chance to prove its mettle… and unfortunately is appears to come up short).
The lower blade is a Clauss… these Clauss models are known for a “flatter” round profile at the point (as if someone modified a square point) it is one of the few razors I know of with such a flat-point profile out the factory. The one in the middle is a Kismish, vintage, manufactured in Germany. 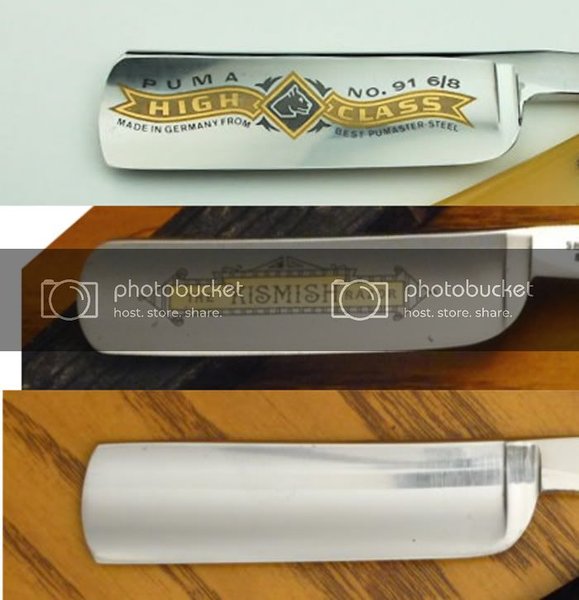 The other two are both longer by approximately 1/8th inch, in fact, if the razor in question was as long as the Kismish the etching would be centered perfectly.

5) The Puma in Question is missing the black rubber grip at the tang… (Perhaps it has seen better days).

A theory:
Though I am not all too familiar with the Hi-Class line of Puma razors, I do believe the scales have numbers stamped at the pivot end indicating the blade intended for it… perhaps the scales do not belong to the blade in question… of course I could be wrong. It would be a good idea if folks who own un-altered Puma razors of this model check the numbers on the scales.

You’re Honors… I rest my case and now return to my cave.

Great to see you my friend :thumbup:

I've taken this thread offline for a while to reflect upon how we could continue the core of the discussion, without a further violation of our forum rules. Coticule.be is not a public court where people (who are not even present) must stand trial for buying or selling something at a certain price.

The disallowed part of the debate has been edited out. To do so, required the unpublishing of a few post and the removal a certain text snippets in others. I apologize to to all who've got their words edited. There is nottting altered to the actual content that concerned the allowed part of the discussion. The only other option was to drop the entire thread, which would have been a pity. I hope every one understands the situation.

Please keep the discussion on topic.