I received the new REX Envoy and a tub of Razor Emporium Barbershop soap as part of a pass around. I had my first shave with the Envoy tonight. I ended up testing the soap also just to make it a complete RE shave experience. At first I wasn't going to spend time reviewing the soap, but the performance of the soap changed that real quickly. The soap was fantastic. It was easy to lather and the scent was as close to a true Barbershop scent of any soap I tried. It was not overpowering, but it was lasting. A half hour after the shave, I can still smell it. It was easy to build a rich lather, but it was not a thirsty soap. When I though I could build the lather a bit more, I added a couple more drops of water and the lather turned airy. Still, it laid a slick and well cushioned base for my shave.

The Envoy itself is a dead ringer for the Ambassador except for the absence of the adjustment area. Even the handle mimics a two piece razor very well, however it is a three piece razor. It is very hefty like the ambassador and does include a serial number and date code on the base plate. The base plate is indented where the handle screws in and the handle is also indented to fit. This makes it hard (but not impossible) to use other handles. Overall build quality and finish is excellent and equal to the Ambassador. 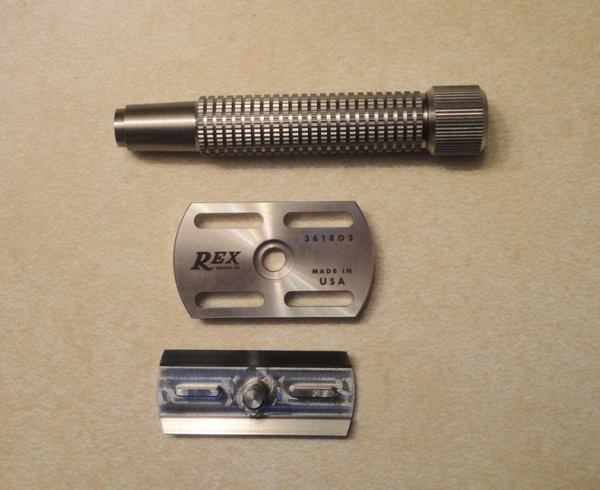 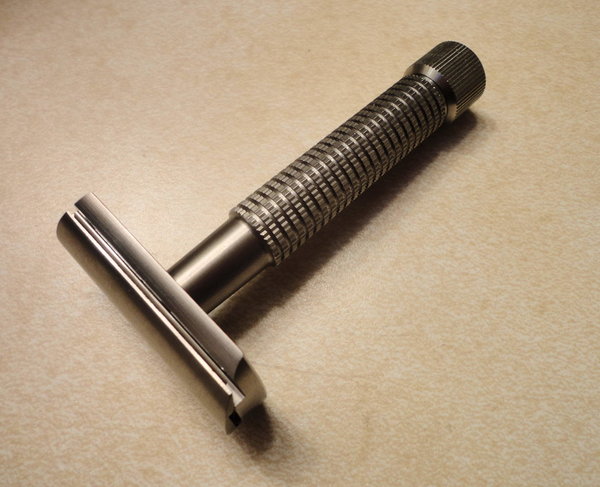 I loaded the Envoy with a blade that did not have much shaves left on it, which is something I do when I test all new razors. This is so I can get a feel of the characteristics of the razor. I remember that Matt from Razor Emporium had said it was supposed to be equivalent to a 3 setting of the Ambassador, however it felt a little more (like closer to a 4). Weight and balance of the Envoy was very similar to the Ambassador. While shaving, I found that I could adjust the angle to go milder or more aggressive by about a half setting. I'm not sure if the Ambassador could do that, but this was primarily because I never tried it since I adjusted the setting between passes. I ended up with a two pass plus minimal touch up BBS. Tomorrow, I will try shaving with a new blade and if I feel as comfortable with the razor as I did tonight, I will compare the Envoy to the Ambassador by the weekend.

For those that prefer medium range razors and don't want to spend the money on an Ambassador, the Envoy is definitely a razor to consider.

Thanks for this review

Yes thanks for your opinion, didn’t like the adjustable Rex (have to admit that no adjustable has stayed in my den and I tried most of them). Made up my mind recently to stop trying out every new razor on the market and just like the King I stand firm in my decision not to buy anymore stuff
Practice for a Long Long Time and All Is Coming

Just Snuffie we'll show them how strong our backbone is in this one.

When do I start the clock? @The King still managed to accumulate a lot of soaps AFTER he made a decision not to buy anymore.

This is me (look up the translation) 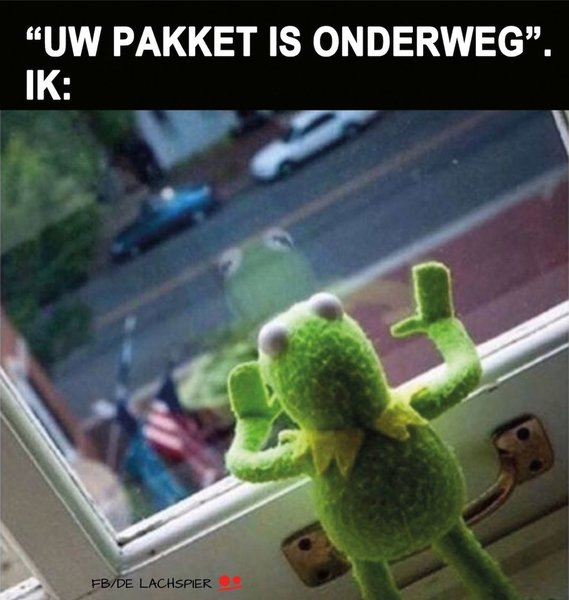 Second shave with the Envoy and lessons learned from yesterday's shave really helped. I adjusted the angle to ride the cap a little more and I changed to a newer blade. This effectively changed the shave to a phantom one where you don't feel anything, but most of your stubble is cleared after the first pass. I played around with the angle slightly when I needed the Envoy to be slightly more aggressive on some problem areas, and overall, this worked well. The balance of the razor is great and even though it is heavier than I like, all came together to give me a smooth and painless two pass BBS. Tomorrow I will do a shave off with my Ambassador, shaving one half of my face with the Envoy and the other with the Ambassador.

Yep no hair, ugly as hell and smooth as an eel
Practice for a Long Long Time and All Is Coming

Final shave with the Envoy tonight before sending it off to the next person. As promised, tonight I compared the Envoy to the Ambassador. Half of my face I used the Envoy for however many passes it would take to give me a BBS and the same with the Ambassador on the other side. For this comparison, I allowed myself to use the Ambassador as I normally would, which meant starting at setting 3 for WTG, moving to 2 for ATG and touch up at 3.5. The Envoy I played with the angles I learned over the last two nights and relied on my shaving skills, which may or may not be a good thing. 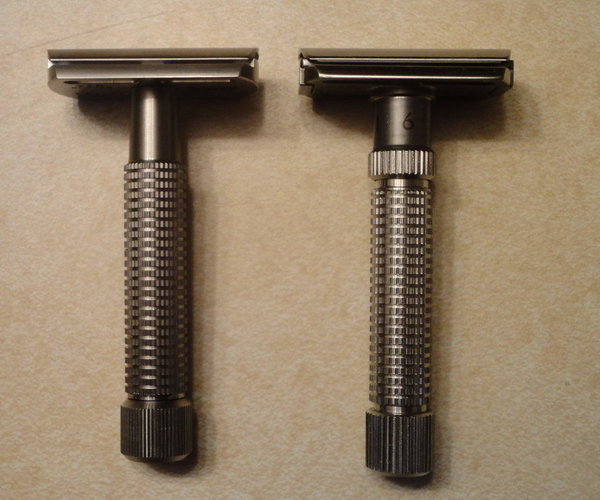 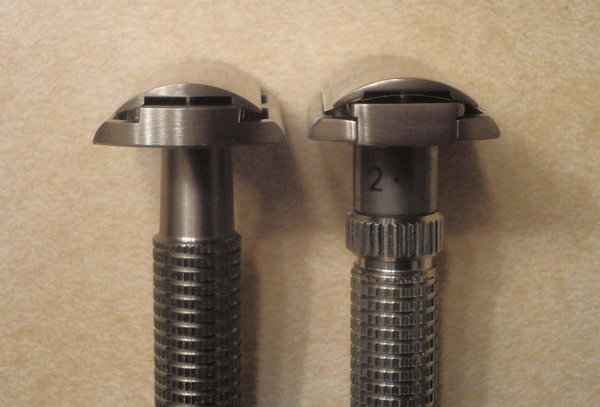 In comparing both razors, the size and weight was almost identical. The head on the Ambassador was thicker (because of the adjustment plate), but the shape of the cap and the guard was the same. There is a problem spot on each side of my face which requires attention, but in different areas and different types of attention. The Ambassador went first and did the left side of my face. Going WTG, I immediately noticed that it was harder to get a good angle under my nose going WTG. Not a major problem, but I knew that the Envoy would handle that area easier. I used the angle I learned with the Envoy on the Ambassador, and it did allow for a smoother pass. The Envoy had no problem with the WTG pass.

Comparing the two sides after the first pass, the Ambassador did slightly better, especially in handling the problem area on the left side of my face, however, both razors did a very good job. ATG pass went to the Ambassador at setting 2. The shave was much more comfortable and the newly found angle made it more efficient than before. The Envoy felt a little rougher as I had to change angle slightly to be more efficient. Pass 2 came out with a slight advantage going to the Ambassador.

Partial touch up pass was going XTG under my chin area, which is not easy as there is a lot of loose skin (and maybe an extra chin) in that area. Both razors managed to touch up fine and both sides of my face felt the same.

I have to say that this shave off ended in a tie, even though the Ambassador did better in the first two passes. The Envoy was able to stay close and end in a dead heat.

Lately there has been a lot of $100 - $150 stainless steel razors coming out. Of those, I own a Muhle Rocca and EJ 3one6 and have tried a Blackland Dart. The Envoy is definitely a razor to consider if you are looking at that price range. Fit, finish, and balance is excellent for a razor in that category and even though it is rated squarely in the mid range of aggression, it does allow for different angles and it is a very efficient shaver. Many folks say that they don't like medium razors because their beard is kevlar coated barbed wire and their face is a cream puff and so they need something very aggressive. Whenever I hear that, I think that these folks need more time building their skills rather than a double edge chain saw. The Envoy in the hands of an experienced shaver can handle any beard, and in the hands of a new shaver can help them build their skills.

Many folks say that they don't like medium razors because their beard is kevlar coated barbed wire and their face is a cream puff and so they need something very aggressive. Whenever I hear that, I think that these folks need more time building their skills rather than a double edge chain saw.

The text above from you is great and you put it great.

I, too, always laugh when someone writes again that he has a very heavy full beard and needs special tools for that.