I found a razor on a flee market, a Saudedde (a Montpellier). I believe it's a 'rattler' or 'faux frameback' blade, with some tarnish/rust under the spine. These blades usually have a straight-section under the spine, and the original grinding is often at 90 degrees to normal - parallel with the spine, rather than from spine to cutting edge. This leaves some unexpected grind marks on the blade, often going in a direction that appears to be unusual.

Anyway, I worked out the chip and removed the rust. I wanted to try out my new (and first) whetstone I got, a La dressante. Started with a milky slurry and kept adding drops of water in between sets. Took a while but got it to where I could easily shave arm hair. Then I followed the Unicot method and did a test, got a violin. Stropped and got HHT-3 on all but a very small area (HHT-2). Unfortunatly the razor is very loose and the blade moves around on its own (pins need to be fastened) and the blade fell downward and hit something, there is now a very very small chip in the edge, I'll redo tomorrow and put up some pictures of the razor. Doesn't matter, the fun I had and all that for the price of 1 Euro I wonder how it will shave. Greets Ron

This is how it looked before 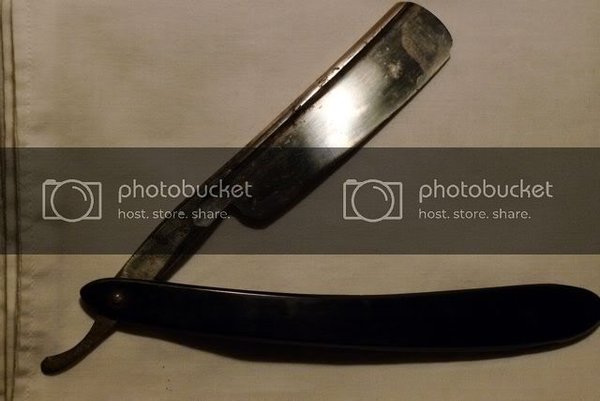 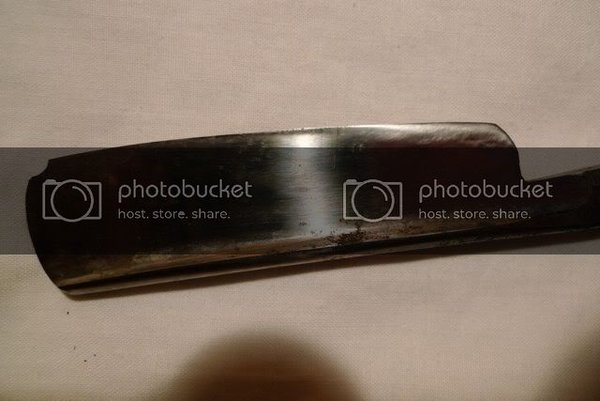 I would advise to fasten the pin first, before anything else. Should you not have a ball peen hammer, also a heavy spoon will do.
Put the razor with one end of the pin on a small anvil (I use the back part of a vise) and hit the pin with light taps until it fastens. As for the striking force, I never tap with more force than I could tap on the fleshly part of my finger, without really hurting myself.

I find honing an stropping a razor much easier when the pin is properly tensioned, that's why I always fix that first, if needed.

With the hair source, you've shown me, there should be no problem reaching HHT-3, right off the stone after Unicot. It sounds to me as if you did really well at the bevel stage. Once the tape is on, don't use any real pressure. Keep the slurry for the first taped step very light. Certainly on your La Dressante. A hint of slurry will do. If 50 finishing laps on water don't give you the expected HHT-3, simply try to add 30 more, and try again. It shouldn't be necessary though.

I must agree on the tight pivot pin, it's much much easier to hone and strop with a firm pivot pin, if i am honing a razor that is not my own, I sometimes use tape on the scales to hold the blade tight whilst I work on it.

I tightened the pin as much as I could with a spoon, it's better now but not enough (I'll will get the necessary tool today) so I taped it on the scales (thanks for both suggestions). Worked the chip out and sharpened it. I have to go to the gym now but will strop and try to shave when returning. Got a violin of the stone. Not bad for a blade that was extremely dull. I think that the previous owner buffed the blade, there is some discolouration near the edge, could be that it got overheated and lost temper. 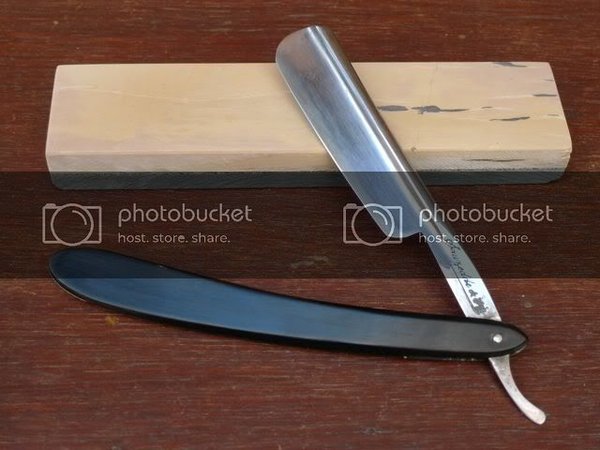 By the way, shame Hendrik didn't get his hammers out before you left on Friday: he bought a batch of light peening hammers which may be ideal for pivots of razors. You could have taken one with you ...

Now, that's a kind of illustrative description which can hardly be beaten, equal to the now famous "think milk, not cream, and never yoghurt" slurry description. Priceless. Just like the tip to use tape for holding the blade in place - I 'll use it to hone the razor I started restoring, but I have to test the steel before I go further. Keep on going, folks. :thumbup:

Snuff, I do not know if it has been mentioned, the blade should be open when you set the pivot pin because the tang is tapered toward the tail. I use a 2 ounce hammer but the spoon should work.

@Wim: I would have liked very much to stay but SHMBO wanted to go home ;-) I would have bought one of those peening hammers.

Just stropped and shaved with the expensive razor and although I could finish the shave it was not to my liking, felt some irritation afterwards. Doesn't matter, would have started all over anyway, need practice. By the time we meet again it might have become a 4/8 thingie ;-)

@Stijn: pity you could not be present, maybe next time?

@mysteryrazor: thanks for mentioning it, I did open the blade before I started.
Practice for a Long Long Time and All Is Coming

Looking good.:thumbup: Although the HHT-1 worries me a bit. Let's hope the blade didn't loose its temper.

I guess there is no harm in doing it otherwise. I'm just stating how I do it. I haven't used tape yet to secure the scales while honing. I figure that if a razor is loose, it needs tightening anyway, and my peening hammer is never that far away.

I read on some forums that you should do it with the blade open so that's what I did, but you could be right, the blade closes now out of center and I have to be careful when closing it or it will touch a little bit on the scales. Haven't found a peening hammer yet. Not that I plan to do much restoration work but then again when you asked if I was planning on buying another razor in the future I said no and here I am 2 days later and I got myself another one, although it only cost me €1, but as you said with the ones I got for free, it doesn't count ;-)

If the blade did loose it's temper how would that effect the sharpening or how long it would stay sharp or the shaving in any way? I noticed that even in the last stages the water turns to a grey colour (no pressure), I suppose the edge became softer and loses metal at a faster rate?

Have a nice day, Ron
Practice for a Long Long Time and All Is Coming

There are several things that cause a blade to not center. If you look at the tang sides you will see a beveled edge on most razors. Watch this bevel as it enters the scales. If the scales are warped you will see the bevel hit one scale and miss the other. The bevel will now move the point toward the other scale. I can sometimes true the scales in hot water. I have also struck the pin head on an angle to move the blade. I usually move the blade in the wrong direction first so it must be opposite to what is instinctive.
M

Oh by the way Bart I pinned up three razors. I realize I start with the razor closed it must be easier to hold. I then open it to set the pin. As far as centering I drill my wood scale blanks while still tacked together on the drill press. The washers are dimpled in the die in my bench block. The bore of the washer forms to a taper when the washer is dimpled. I trim the pin with a file using a piece of card stock as a file guard. The thickness of the card leaves a small amount of pin to pein into the tapered bore of the washer. This method is similar to the factory's. As very little force is used in the peining you will not bend many pins.
You must log in or register to reply here.
Share:
Facebook Twitter Reddit Pinterest Tumblr WhatsApp Email Share Link
Menu
Log in
Register
Install the app
Top