slurry on canvas/linen instead of paste?

Have you tried it with coticule slurry?

No, not yet. But I'm fairly confident that it would work as well.

Funny you should ask...
I was doing up a strop this weekend, and I intentionaly made an extra to treat with coti slurry. Bart's previous mentions of it had me intriuged... enough to plan to make one. I just needed a bit of incentive. I've been collecting the slurry from lapping for a while now. now that I've got a couple extra strops... again, I just need to find the time.

BTW Louis, did you order that chunk of horsehide you mentioned?

: I still need to go to the fabric store, & then to the hardware store to get linen and some hardware. Looking forward to the leather arriving! Do you have any suggestions on cutting the leather?

: But not a straight razor!

well, seriously, that and a straight edge. that's it, that's all. I use an "Olfa" knife with a new blade in it. And my straight edge is exactly 2 1/2" wide, which just happens to be my preffered width. The crunch comes in finding a section of leather that doesn't show any wrinkling, or scars, or any kind of defect that could interfere with the edge of the razor. If you can, try to cut the lengths so the grain runs parallel.
I'll post a couple photo's so you can see what I've done to hand 'em. It's a pretty hokey system, but it's effectice.

Well. here they are. 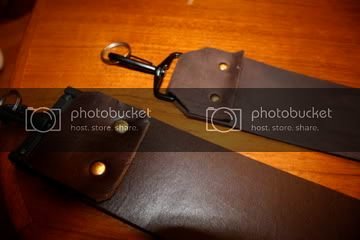 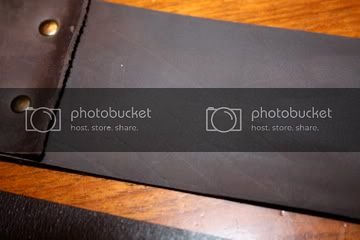 You can see that the hangers come from an old duffel-bag strap. Cheap, and I've got a couple crappy old ones kicking around. they work surpprisingly well, though they look kinda crappy. The rivets are just those rivet thingys you can get at most craft stores, come with a little anvil and a punch type thing for setting them, for less than $10.00
In the one photo, I've tried to show some fat wrinkles that would normaly never make it into a strop, but that's the one I made from the last of that piece of leather to experiement with the coti slurry on. The wrinkle are outside of my normal stroke so they won't interfere.
(The other is the one I was going to send to you, Louis... sure you don't want it?B) )
T

Yes I'm sure, but thanks again for the offer. There will be someone that is a newbie like me in need of a strop that you can help out eventually. However I am very interested in knowing how the results of the coti slurry on canvas/linen stropping turns out though. :thumbup: :thumbdown: :sleep:

It's a little early yet, I treated the leather strop last night with some coti powder mixed with neat's foot oil, and then banged out about 60 laps with my King Cutter I did unicot on my vintage. Not having shaved with it yet.... I will say that the AHT shows lots of promise. Like... a lot! It seems to have given a boost to the keenness and seems pretty darn smooth. I've gotten pretty good at correlating the AHT against the actual shave, so I'm kind of excited about this little trick.
I'm debating with myself wether I'm going to bother shaving tonight... I'm kinda pooped so I probably won't make it off the couch before I crash.

Not hokey at all Chris. Where would one get suitable linen? It seems like the edges would need to be serged or something to keep from fraying. Thx, Denny

Thanks Dennis, necessity is the mother of invention, or something... it's the leather that's the important part.
As for the linen component, that's always been the hardest part for me to source. Torolf seems to have a good line on some stuff. Maybe drop him a message.
When I first started out, I made a trip to the fabric store and bought some 10 oz cotton canvas, and cut it and folded it into a tube type thing with the aid of some heat activated glue stuff. It made some pretty decent strops for experimenting with.
I've dug up an old thread i started on B&B with photos
Please, Log in or Register to view URLs content!
I've still got a couple treated with dovo pastes, but they've been relegated to the kitchen knives now...
I had enough left to cut just a plain strip out of to treat with Thiers issard's paste, and even though it frays, it is still very effective. As you say, serging the edges would help.
Another thing I'd like to try is a strop made from silk.

Thx. You are nothing if not the inventor. I have even found long ago that I could strop quite effectively on the bluejeans on my thigh. Just flex my massive muscle a bit and perfect tension. Does your wife ever use one of your $300 Japanese knives to cut on a plate. Mine did. Been a bachelor now since '88.


Here's a quick update; (i'm late for work again) I shaved with the razor i stropped on the coti powder pasted strop.......... it seemed to add a bit of keenness, and didn't affect the smoothness at all. I still find the edge a little sub-par for my tastes, but at this point, I'm going to blame it on the vintage stone and my ability (or inability) to shave with it's edges.

i'm not so impressed with the initial results that I'd whole-heartedly recommend it for a good strop.... mine was very, very, very, cheap so it's no loss, but I'm left wondering what the point would be for a well honed razor, beyond the typical "touch-up", as with any other pasted strop, though I did appreciate the little bit of added keenness. I'll keep this razor the way it is, and keep experimenting with the strop and see what comes of it. Maybe I'll try treating a cotton canvas strop. FWIW.... I'd probably prefer this over a CrOx pasted strop as I didn't notice the loss of "forgiveness" that i seem to get with crox.

I have several old strops that I will give this a try on. Right now, I don't see how I would ever need more than the comfort I am getting from dilucot, dovo linen/leather and kanayama smooth leather. Later, D
You must log in or register to reply here.
Share:
Facebook Twitter Reddit Pinterest Tumblr WhatsApp Email Share Link
Menu
Log in
Register
Install the app
Top