SU-Patron Gold
I am part of a passaround for the soon to be released Stirling Soap Co. stainless steel razors. Two were shipped in the pass around, the ST version, which I am guessing means STandard, and a HA version, which is for tough folks that don't wear masks in public.

There was a whole drama that went along with these razors as it was originally scheduled for release last summer but it was found that the company that Rod contracted to manufacture these "Made in the USA" razors actually cut costs by subcontracting the work to a Chinese company which was also to etch "Made in the USA" on the bottom of the base plates. So the 300 razors were destroyed (maybe), money was returned to Rod, and he found another company (in Wisconsin) to manufacture the razors. Supposedly these are the razors that will be sold soon, but not sure when because of all this virus thing going on (and on) in the USA.

The razors came in a genuine leather travel case, which I am sure will NOT be shipping with the razor wen released (unless you buy it separately). The case itself is very well made and a quality item. 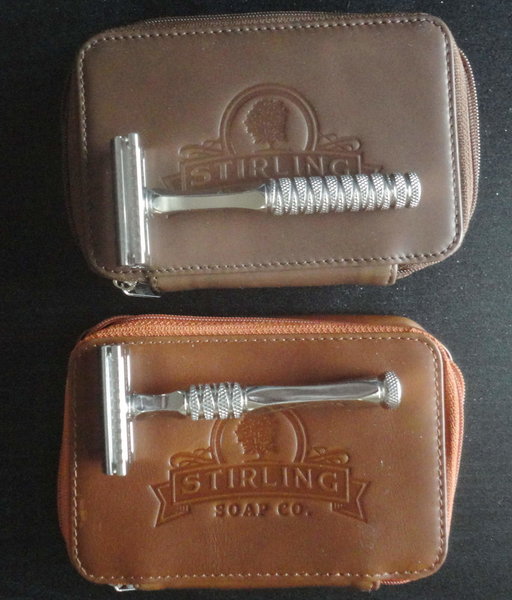 There will be two different handles and since things are still up in the air, it is not clear if the handles will be a choice with the razor head or if one razor will come with one handle and the other razor with the other. The bottom of the plates will be numbered along with having the name of the head etched on the base plate. There is supposed to be three finishes for each razor - matte, regular, and high polish. Pricing will depend on the finish and should range between $100 - $200. Of course, until it is released, everything is still not set in stone. 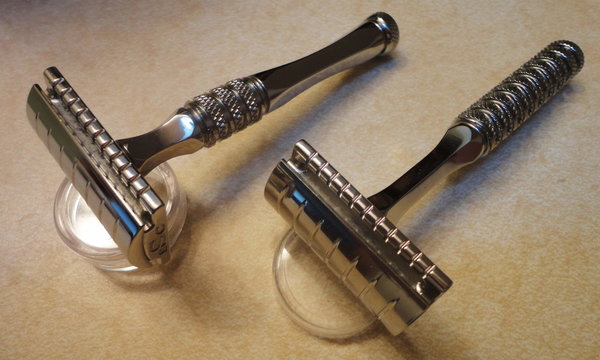 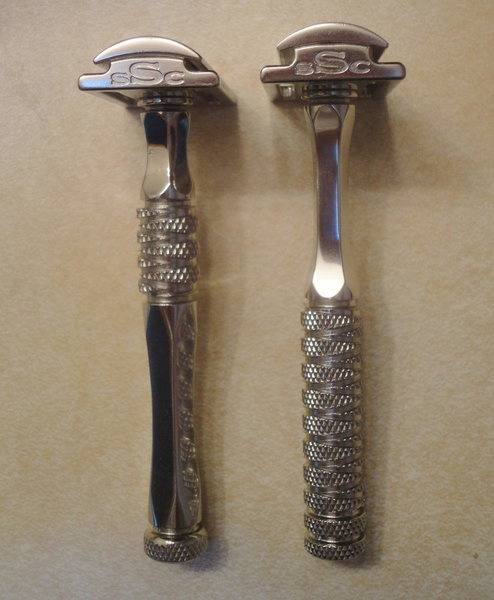 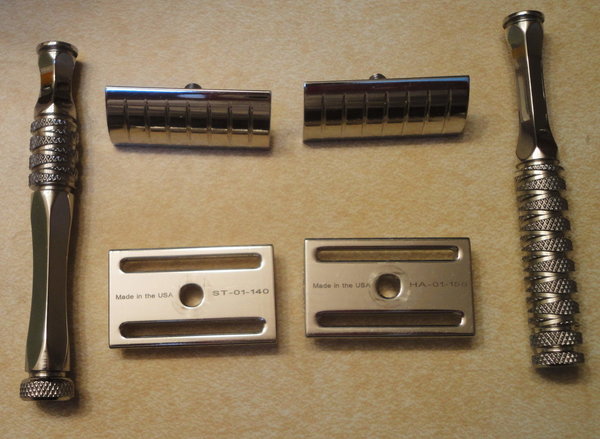 I have the HA version loaded for tonight's shave and will report on it shortly if I don't sever an artery.

SU-Patron Gold
First shave tonight using the HA head. First of all, the blade loading was easier than I thought it would be. The Mamba, GC, and Goodwill all have the blade guides on the base plate, but this is the first time it was a bar and not round pins. It did hold the blade in place better than pins, but still there was a need to lift the base plate in order to secure the cap and it was easier for the blade to slip out of place. Secondly, the handle was a little different with the portion nearest the head being smooth and skinny, similar to the Krect razors. The design of the handle worked well as the head was heavy and by holding the handle low, it allowed (forced) me to guide the razor head and let the weight do all the work. Fit and finish on the razor was first class. 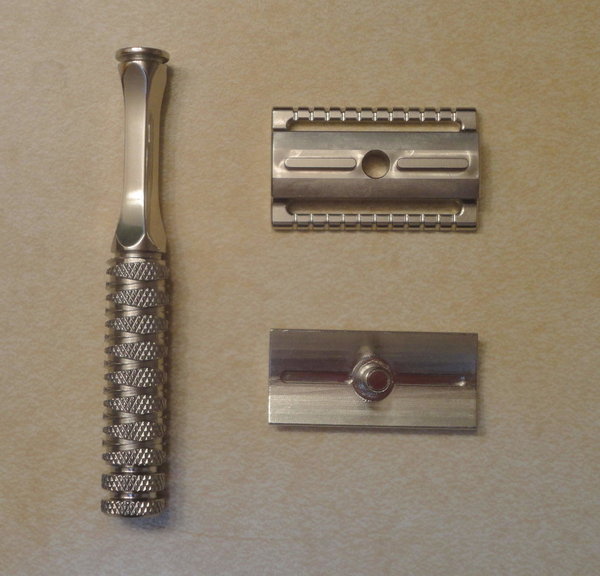 On with the shave. To be honest, I have to say that this is one of the worst razors I have shaved with. It equals the Yaqi Ares in aggressiveness without efficiency. There was significant blade feel and a very narrow angle where it worked well. This was similar to when I shaved with the ES (Alpha) Outlaw last week, however the difference was that using the wrong angle with the Outlaw did not scrape a layer of skin off your face. I looked at the blade exposure and knew that I needed to go real slow and try different angles to get things right. When I found the proper angle, it was very efficient in many places, however in my problem areas, I could not get it to do a clean shave mostly because slight pressure, skin stretching, and buffing would be dangerous with this head.

I am not new to aggressive razors, with my two favorites being a CG Lvl3 SS, and my REX Ambassador set to 6, however this HA head is not something that I would consider buying or shaving with if it was given to me. For now, I have it loaded for one more shave tomorrow just to see if there was something I missed from tonight's shave. After that, I will move on to the ST head and hope it is better.

SU-Patron Gold
Second shave with the Stirling (Widow Maker) HA. Maybe not an appropriate nickname as I am no longer married. Learning from my first shave last night, I went back and studied what was going on. I even took a picture of the head and realized two things: 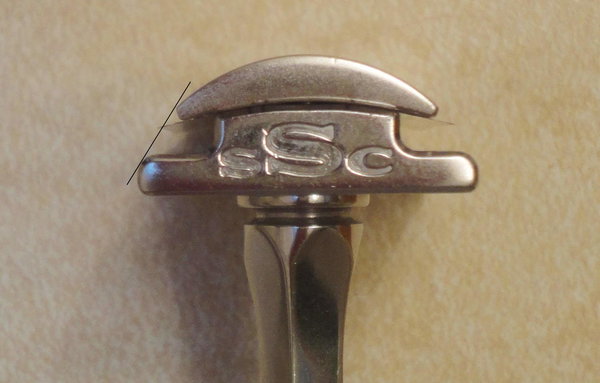 1. The blade was sticking outward instead of downward and,
2. there was a gap between the blade and base plate that could fit the rabbits that made residence in my back yard.

Keeping this in mind, tonight's strategy was to use this razor as a devette, riding the cap and not even bothering to use the base plate. Also, using short, deliberate strokes and stretching loose skin helped me through this shave. I ended up with a two pass near BBS shave tonight, however, like last night, I could not quite achieve a complete BBS because the very short stubble that was left over could not be cleared away by buffing or applying some pressure.

The HA does deliver a close enough shave, however the effort needed to achieve one is not worth it, especially when a CG Lvl3 achieves better results with less effort.

Looks a bit bulky and awkward... Not a big fan of them handles either...

SU-Patron Gold
First shave tonight with the ST version of the Stirling. As soon as I started my WTG pass, I immediately noticed that there was still significant blade feel. Not as much as the HA, but still significant. After the WTG pass, I felt around my face before lathering for my ATG pass and found a lot of stubble left. For my ATG pass, I immediately went back to the riding the cap mode of last night. Maybe not as severe as treating it like a devette (only because the guard was closer), but definitely with as little guard as possible. Once again after two passes, I had a near BBS. This time, I tried buffing and skin stretching and dry touch up and the ST was better at doing that. This was definitely a better shave, however it just seems to me that significant blade feel was part of the design, but shave efficiency was not. I will attempt one more shave with the ST tomorrow and then drop it in the mail for the next victim participant next week.

SU-Patron Gold
Sometimes it's nice not to notice any buying feelings inside while reading a review of a new razor.

Go ahead my friend saves us a lot of money.

SU-Patron Gold
Second and final shave with the Stirling ST tonight. After my experience the previous night, I tried using a shave angle that still rode the cap mostly, but lowered it enough for the safety bar to gently rest on my face for the WTG pass. Blade feel was still significant, but not as much as the night before. I still used slow and deliberate strokes, and I did end up with a slightly more efficient pass than last night. For the ATG pass, I was able to actually rest the bar against my face . I still had to stretch my skin and buff a little, which produced slightly better results. I ended up doing an XTG pass along my jaw line and under my chin area and ended up with a BBS. Definitely the ST is capable of giving a smooth and efficient shave.

My overall assessment of both the Stirling HA and ST razors is as follows:

First of all, the quality of the build, fit, and finish are top notch. Even the travel kit it came in was outstanding.

The handles were not the friendliest handles. They were very unique in design, and the angled areas where there wasn't knurling was a great idea, mostly because it allowed a firm grip in areas the knurling didn't cover and where my fingers went. The bad part was that many areas of the handle where my fingers usually rested lacked knurling. Of the two, I prefer the handle with the knurling on the bottom because it allowed a natural low grip, which helped guide a heavy head. the handle with the knurling on top did not appeal to me because it was in an area where I did not naturally grip.

As for the heads, the blade seating being a bar along the base plate took some time to adjust to. I prefer the regular way of having the blade seat in the cap only because it is easier to position the base plate and screw on the handle. Still, the RR GC and Mamba, and the Gillette Goodwills align the blade on the base plate, but they use pins and not a bar. This is not a deal breaker, just something to get used to. The cap with the grooves was a nice touch, but did not lend much to the shave.

What I really did not like about the design of the heads were that the guard was just squared off without any type of taper. This did not allow for the bar to assist much in the shave. Also the curve of the base plate clamping the blade allowed the bade edge to stick outward instead of downward. For the HA, that and the huge space between the blade and the guard made for a situation that was prone to cuts and weepers for those not careful (and even for those that were).

Personally, I saw the HA as one of those razors that fall into the Paqui Chip category (which is a chip in the USA not meant to be a snack, but was so hot it caused blisters on your mouth and throwing up), where it was made just to say it it the most aggressive razor ever. The ST also had significant blade feel, but was in the higher end of the mid range. I believe that both razors missed the point. Both had significant blade feel and were aggressive, however I believe that razors should be efficient and not necessarily aggressive, and YES I believe there is a real difference between the two. Excellent example is the RR Mamba and GC series where you don't even feel the blade when you shave with them, however after two passes, you have a BBS without even enough stubble to touch up with. The Stirling razors missed that, although the ST came close. To be honest, a lot of the new razors coming out recently also missed that (which is why I have them on BST right now).

Monday, the razors will be moving on to the next person. I think the best part of this pass around is that it helped me decide that I wasn't interested in either razor when they came out, but have one in mind to give to a wetshaver that manages to piss me off enough.