The Coticule Chronicles of a Newbie

I just received my first coticule (and hone) from Jarrod at thesuperiorshave.com along with a slurry. Hopefully, I don't bore you too much with this extremely long entry. Hopefully, it can shed some light and hope for new coticule users.

I've never honed before and against the advice of many, I decided to go for a coti. Something about each coti having it's own individual characteristic...and the journey to learn those characteristics really appealed to me. People told me to go with DE before jumping into straights but of course, I didn't listen. Why start now right? If I plan to learn it, why take the detour?

Enough with the ranting and on with the story!

The coticule is has a dark grey/blue (maybe even green) hue to it with faint blue marbling. It also has some tiny red speckles throughout but the coticule gives a nice even matte shine. Resembles coticule No. 2 in the vault so I'm assuming that this is from the La Grise vein (maybe Bart can verify?). The contrast in color between my slurry stone and coticule is quite amazing. I'll take some pictures when my girlfriend isn't around. She thinks it's weird that I want to take pictures of a rock.

With a brand new toy in my hand, I started to follow Bart's guide to aspiring coticule honers. (Beer included because Bart said so.) rubbing up some slurry was a much harder task than I thought. The slurry stone would glide really smoothly with zero feedback and then sudden "catch an edge" and roll over. Is that normal?

I carried on with the instructions which by the way, took me by surprise. In the beginning, I could not keep the razor flat! It kept on rocking back and forth. So much so that I even question my stropping technique. Thankfully, as I continued to practice, my strokes improved.

I combined several days of instructions into one as I have pnemonia and couldn't go to work. It was all meant to be.

Confident in my skills, I set forth to do hone for the first time. Unicot was my choice of method. Failure was what I ended up. Shaving was not pleasant. I had uncut whiskers randomly sticking out. Foul four letter words dripped like honey from my lips. This abysmal shave went on for 2 days so I decided to take a break.

Tonight, I decided to go at it again. (My girlfriend refused to kiss me because my uneven stubble was irriatating her skin.) sitting on my bathroom floor. I began. I went straight to dilucot method (ran out of electical tape) and followed Bart's instructions to the T. I also took Bart and Ralphy's suggestions on keeping my hone wet which I did by tilting the coti in the opposite direction. I also did a couple of x strokes after the drop of water to mix it with the slurry as well as to rewet the coticule. Finished on water with 100 strokes. Till this point, I have not been able to pass HHT. Today, I barely hit HHT-3! My jaws dropped.

Stropping the razor was also a completely mind-blowing experience. I had a completely different feel when stropping. Not only did it sound different, but it felt different as well. The feedback was much smoother yet there was a very satisfying draw. Almost as if the linen component was sucking the razor in. After stropping, I was able to hit a strong HHT-3.

How was the shave? I have to say it was extremely smooth. Not exactly my best but it was one of the best. I usually get tiny nicks on my upper lip when doing ATG but today...nothing. I walked out of the bathroom today with a face as smooth and hairless as a baby. Face felt a bit tight afterwards but I don't really care right now.

I do have to work on my strokes though. The toe and heel end was much rougher than the center but I think I did alright for my first honing success after 5 days in front of my coti. The idea that it's only going to get better really is exciting.

All in all, the experience with my coticule was like having your first child. Immediately fall in love at first sight but quickly realized that you have no clue as to what your doing. All the reading on coticules that I have done in the past couple of months helped me but there is no substitute for spending time in front of the hone and getting a firsthand feel for it.

It does feel good to earn your man-card.

BTW... I learned that having your hot cup of coffee next to your water bowl is not a good idea. Dipped my pinky in hot coffee twice and diluted with cold coffee once. Girlfriend was watching and laughing the whole time. Didn't even bother to warn me.

welcome to this cozy place!
Not too long ago I was where you are now. Your journey has just begun and believe me, there is a lot to learn and to experience. Enjoy!!
It seems that you are heading in the right direction. Nothing you describe seems strange (well, except taking pictures of rocks .. ) Sure, many questions will come up as you go and you can count on the coticule community to help you out with valuable tips. However, at the end of the day you will (you have to) find your own way with your coticule. They are all different and while theory seems so straight forward, reality will require you to take one or another turn. Or to use Bart's metaphore about riding a bicycle: It's hard at the beginning, nobody can really explain how to do it exactly, but once you've got it down it's totally intuitive.
And just to come back to taking pictures of rocks, please do so. And don't worry about the lady ... she'll get used to it as even more strange things are about to happen in your house

What a great story! Totally made my day.

Sounds to me that you are a genuine Coticule character. I've always been in the habit of staying out of "what hones should I buy" threads on other shaving forums. There is just not much meaningful to say and everyone always recommends what he uses, even if it's the only thing he ever used. If anything can be said about the various options for honing razors, it's that it often comes down to personal inclination. Guys with the stubborn inclination to seek their own path to success, will generally love Coticules. I don't see a reason for a detour either.

Not without a few good pictures of the surface and the sides of the hone.

Yes. On most Coticules, you need to tilt the slurry stone just the tiniest bit. That will put all the rubbing pressure on a much smaller surface area and makes raising slurry much quicker.

Sorry to hear about your pneumonia. Take good care. I hope you make a quick recovery.

That sounds very good indeed. :thumbup: After the first break-through, things usually only get better, albeit in a sinusoidal way.

Thank you for the enjoyable write up of your first experiences with a Coticule. I'm sure it will inspire and encourage many that come after you.

Here are the photos that I've promised.

This picture really shows off the almost holographic-like qualities. 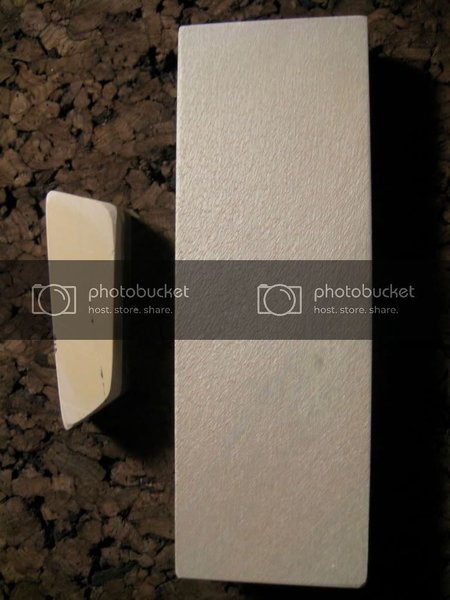 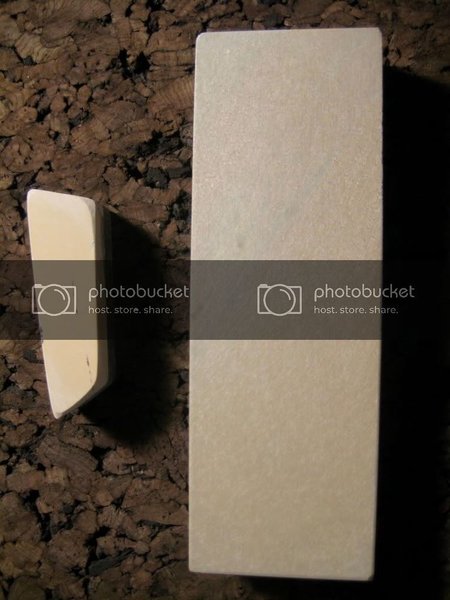 Close up. Shows the nice blue 'vein' as well as some of the red speckling. 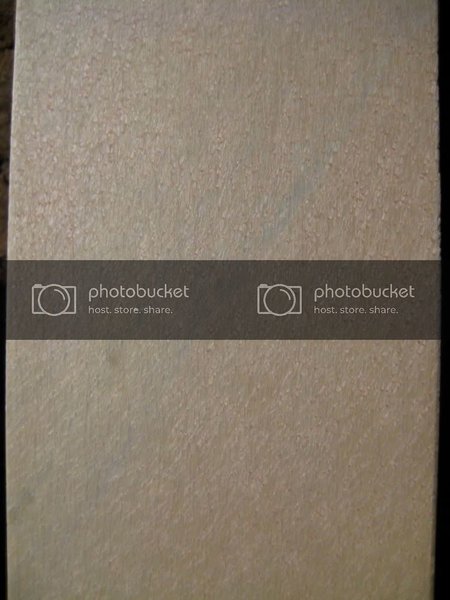 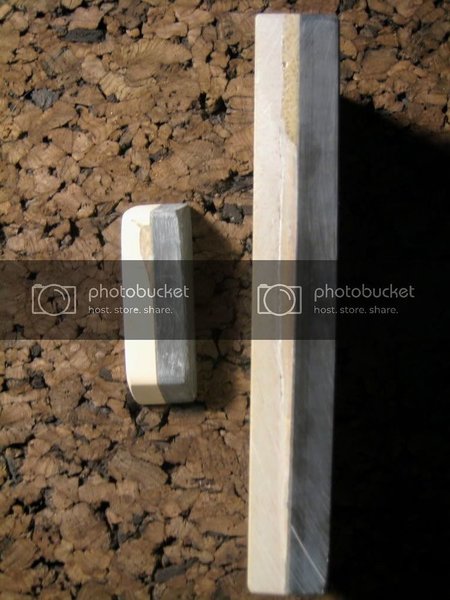 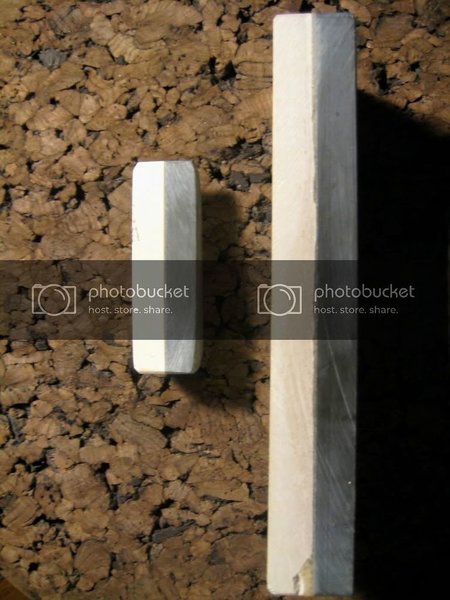 The Coticule is a La Grise indeed. The slurry stone is difficult to determine, could be a La Veinette, a La Dressante, or a Les Latneuses.