Ever seen that "cute" short bladed, French point razor with the long monkey tail?... often etched "The Perfect Razor"... yup, that's the one.

While digging around in Google's patent archives and stumbled upon this...

The text is short (i suppose, like the razor), but makes an interesting geometrical reference to the form of the blade.

This shape is absolutely fantastic, I love it! :love: Actually, despite the date it looks really modern to me! With just a slight nod to the end of XIX[sup]th[/sup] century. No wonder they called this time in the arts 'Modernism'

love it, where can I get one?
thanks for sharing

Yes, I believe the design was a forerunner for a few other brands... In fact, some of our modern custom razor makers do imitate the design (luckily, the patent has long expired).

I am afraid they are a bit scarce (indeed I been trying to acquire one for some time now but as usual am out-bid). The one in this completed auction is a bit worn but judging form the price...

However I must comment on the auction, the razor was sharpened by the seller who obviously didn't understand anything about the razor, so he "flattened" the lovely smile it once had... brings tears to my eyes.
M

Now I can see how hopeless it is. But half a year ago, before reading this forum, I'd be probably amazed by mastery of the honer who managed to make so straight edge from so "skewed" blade.
M

Speaking of which, Smythe, what do you think about this razor? 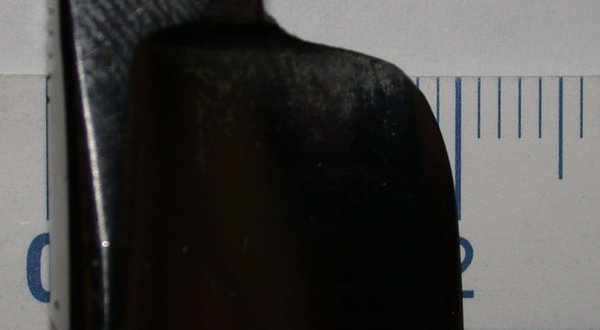 Comparing to the pivot axis, the point looks a bit warped, the heel looks stright. 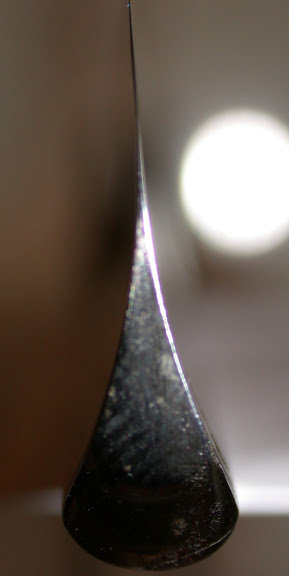 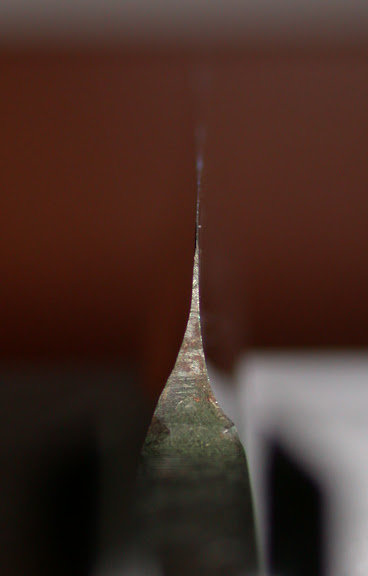 Last but not least, the blade seems to have been polished with low grit paste (the remnants of which can still be found on the sides), overheated on the point (the dark spot) and kept in a vice during that process (there are two symmetrical scratches visible on both sides).

I won this razor on an auction. It was described as an 100% antique in mint condition, with no flaws. Pictures were good enough to see the razor but not enough to see all those defects (my fault that I have trusted the comments the seller has collected and her alleged reputation as an antiquarian). Now the razor's condition is under dispute with the seller and I'm seriously considering raising a claim and returning the razor (the pictures are from this dispute, that's why they contain the text in Polish).

Ouch!... ok this will be long winded post… so hang on.

Vintage razors often have those grind marks on the face, in fact, there are very few “full hollow” razors that are mirror polished on the face (most will be polished on the Spine, the Tang and the Tail, but very rare on the Face). Much of those polished Full Hollow razors you see folks selling have most likely been sanded to remove pitting and then polished, this “process” will remove most or all the original grind marks on the Face.

Those scratches on both sides at the point near the spine, is most likely where the blade contact the scales when closed, sometimes moisture gets inside the scales and settles at that point of contact and begin tarnishing the steel in a line following the top of the scales (Incidentally… this is one clue some collectors look for, if they suspect the original scales were replaced).

Here begins My Humble Opinion…
While it is possible the blade was honed to remove a chip I do not see the big “flat spot" on the spine (unless it was taped), but in that case you should see somewhat larger (and fresh cut) bevels along the heel. Don’t worry too much about the heel being shorter that the point, many excellent vintage razors were manufactured that way… in fact, I believe Point wider than the Heel is a much better profile than a Turned Up Point (point narrower than the heel).

There appears to be a second “dark spot” at the edge near the point (or could be a dark reflection at the edge)… the bevel/edge appears to be rounded in that spot… If this is so, then it is almost certain someone went at the edge with an abrasive wheel… and they slipped.

Again it is difficult to be sure because I do not have it in hand…. But I would say the blade could be either “Warped” or “Canted”. You can check for Warp by laying the razor on a hone, check that the middle at the edge touch the hone, then flip the blade and check if the middle still touches. If the middle touches on both sides then your blade may not be warped, however, if the middle does not touch the hone on one side then most likely your blade is warped. A “canted” blade on the other hand is a different animal… it’s not much talked about so I will go into some detail… have a look at these two photos of a razor with an extreme Canted Blade:

In the first photo… if you draw an imaginary vertical line between, and parallel to the scales, the line should also strike the edge “dead center” of the blade all the way to the point… in this case it does not… because the edge is not dead center between each scale but instead is canted to one side, and now resembles a Section Razor. 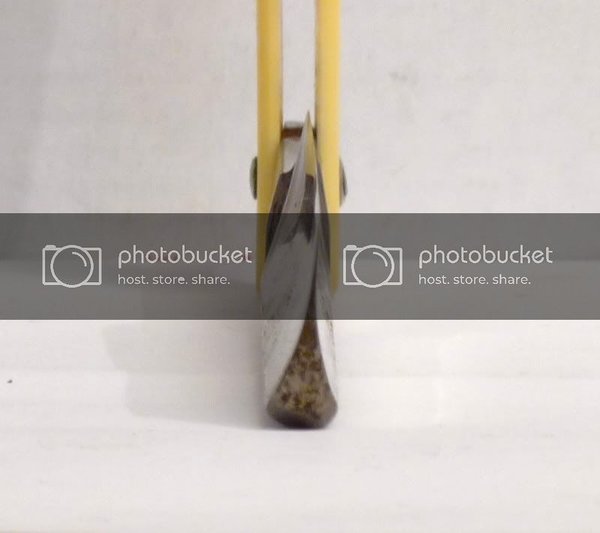 The other photo of the same razor shows the effect when closing the blade… even though the scales are straight, even and un-warped… because the blade is canted to one side; the edge touches one scale when closing… Now a mild case is not so bad so long as the blade is not also warped. It will hone up easy and give a good shave (all else being equal). 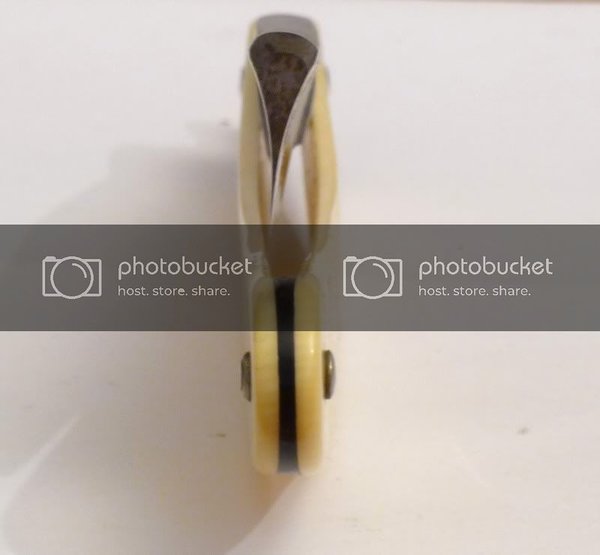 Lastly... I suspect that razor was originally a square point, but for some reason, someone modified it to a round point using an abrasive wheel… that would account for the burn mark at the point… but whatever the cause… that burn is NOT a good sign, and the razor must be returned.

What to do? If you plan to return it, I would suggest you start with a “polite” message to the seller requesting a return for a full refund, as this blade is not in “collectible” condition, especially because of that “burn mark”. Pretend you are a seasoned collector and “word” the message as such, so even if the seller “thinks” she is an antiquarian, will most likely accede to your wisdom and grant the request (no fuss). If however the seller insists that the sale was fare and square (and goodness forbid… thinks that razor is in excellent condition), then you are probably dealing with someone who thinks there is nothing else to learn… then DO NOT waste any more time… immediately open a case with eBay… .

It appears you already have opened a case… please let us know how it works out… from what I see of these photos, you have more than enough ammunition to win this battle.
M

Thank you very much for your time and the review.

I don't have any zoomed out photos and can't take them now (I'm in my girlfriend's house those days and I left the razor in my house) so here comes the brighter one taken earlier: 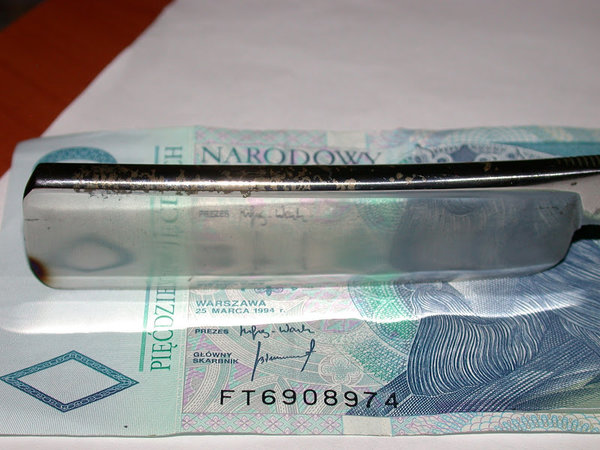 My assumption about polishing the Faces resulted from the observation that halfs of them (along the spine) are still mirror polished while the other halfs (along the edge) are not (see picture above).

Good point! It didn't even cross my mind. I thought they've been left by the vice holding the razor during polishing process.

You're right, the spine looks untouched and still contains spots of rust (by the seller called "patina" :huh: ).

Second? I count the burn mark the first spot. Where is the second one?

I have no chance to check it now but I've learned a new term (canted) and they ways of testing it. Thanks. :thumbup:

That's exactly what I did. I've made use of all the wisdom about razors from your threads (big thanks for them :thumbup: ) and pretended as seasoned collector as possible. It took me almost a month but finally we reached consensus and I volunteered to turn to Allegro (a kind of Polish eBay) with the case.
I'll let you know how the things are going.

Oh yes, I can see it now, in that case you would be correct… if the face near the spine is polished, but near the edge has grind marks (or… different “shades” of grind marks… that is: Near the spine has fine marks and near the edge a rough marks), then yes, it appears someone went at the blade with a course abrasive wheel.

I modified your photo (and zoomed a bit): In the area circled in green is the dark spot through the bevel… the reflection is different in that area or the bevel is uneven (it could be a shadow reflected in the photo). Also at that spot, it appears the grind marks on the face of the blade, extends through the bevel all the way to the edge… in other words: at that spot, there appears to be no bevel… is the edge in that area more ragged than the rest of the edge? 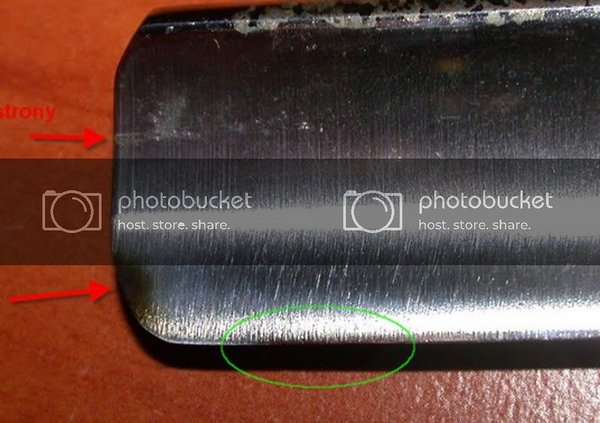