I purchased a shave ready gold dollar #108 off of ebay for 13 dollars. It has been a few years since I shaved with straight so I figured what the heck for 13 bucks I would give it a try, though I wasn't expecting much. It arrived via post this AM and I must admit it is the ugliest razor I have ever seen. The scales look like they should glow in the dark and where the shoulder of the blade was fixed you can see the grind marks from the power tools. Not one to be scared away from something I proceeded to enter my bathroom, wash my face and then lather up. Said my prayers that I wouldn't bleed out, stuck the razor to my skin and...and was SHOCKED. The blade was sharp, smooth and forgiving. It almost seemed like a smart blade that forgave my rusty skills and knew the difference between my whiskers and my skin.

WAIT before you rush out to buy one of these razors I give the credit to the person who sharpened the razor, not the company who made a razor with such huge defects.

At any rate I sent a message to the seller asking him what honing process he used and what finishing stone he used. He responded within a hour. The magical stones that he used...wait stone that he used. Any guesses? "The finish was on a yellow coticule".

Gentlemen without even knowing anything to do about the sharpening process and being somewhat doubtful on the quality of the razor I received the best shave of my life. There is no possibility of me being prejudice and favoring the Coti because it was a coti. The darn things really are that good in the hands of someone who knows what they are doing!

Your description of the way the shave went was a dead giveaway of the process to those who have experienced what a coticule edge can be. Very cool!
R

Just had my second shave with it. 25 laps on linen and 50 on leather. The quality of the steel is nowhere near the quality of that in my dubl duck dwarf (big suprise right?). I suspect with the way the second shave went (still comfy as heck)that this razor might be good for 4 or 5 shaves before I need to take it to my balsa strop (thanks for the quick shipping Ray!) with chromium oxide on it.

I am also unsure that this will be a good razor to learn to hone on. It has a half smiling blade (if that makes sense) at the toe. For actual shaving though it's the way I prefer my blade to be, probably due to the previously mentioned dubl duck which I learned to shave on. But try to learn to hone on it I will as soon as I get a coti.

Gold Dollars/Double Arrows are notorious for needing extra attention (to compensate for their poor grind and large stabilizer). But once you learn how to hone one, you should have some good experience behind you.

By the way, do you have any pictures of it? I'm trying to understand what you mean about the toe.

I have 2 DA's and a Gold Dollar that I use for honing practice, experiments etc, and they all deliver the most wonderful of shaves, Rescaled in Antique Scales, shoulders reworked and coticule finished of course ...lol 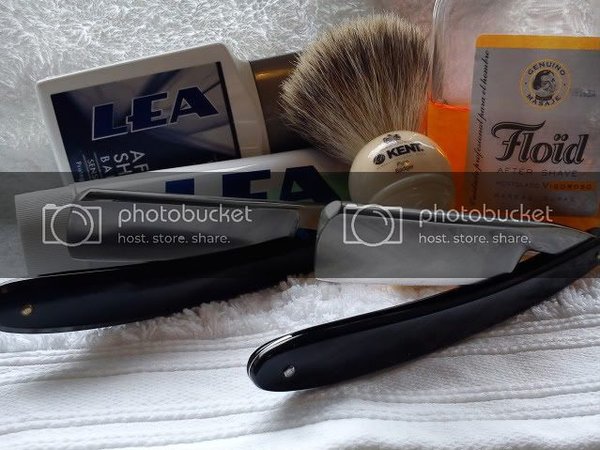 danjared said:
Gold Dollars/Double Arrows are notorious for needing extra attention (to compensate for their poor grind and large stabilizer). But once you learn how to hone one, you should have some good experience behind you.

By the way, do you have any pictures of it? I'm trying to understand what you mean about the toe.
Click to expand...

All I can say is:

A razor that matches the contours of the face! COOOOL!

Thanks for sharing that picture. I can see why you claim them to be every bit as good as vintage Solingen and modern German razors :sleep: It looks like you have some work ahead of you working that out!

Let us know how that goes

Is that razor repairable?
G

rattlerviper said:
Is that razor repairable?
Click to expand...

What razor? Well, in for a dime - here is my original review of this letter opener...

Right. I just had to get myself one of these too. After all, they are cheap, and quite a few people like them. So, I asked a friend and local honemeister (several thousands of razors commercially honed) whether he would be game. And he was. So we went straight to eBay and scored one of the fabled 7/8 ones. Here is the result:

Craftsmanship: I am not sure the picture properly reveals the true beauty of this masterpiece. The scale design might look a tad old fashioned, but is masterfully counterbalanced by the intricate engraving. At least I presume the lettering was engraved. But you never know, maybe the next up and coming super grinder has left his signature there. If so, the world will benefit from his master craftsmanship for many decades to come, as he cannot be much older than 6.

But that was not all. Even more artistic than the scale design was the design of the blade. Apparently, it is the result of an attempt to transfer the highly scientific concept of Intelligent Design to an inanimate object:
I do not think this picture needs much elaboration. But for the beginners looking into buying one of these: Please take a close look at the edge. See the beautiful shape that looks like the Great Wall photographed from above? That is the part of the razor with which you will never shave, because no-one in their right mind will ever even attempt to put an edge on it. Mind you, because of the dysfunctional edge (and uneven grind, and the usual issues with the stabilisers), no-one would spend even more than five minutes with this alleged razor for simple economic reasons.

Balance: The scales, apart from looking and feeling like the proverbial brown stuff, are light as a feather. And I mean a hummingbird’s feather. Which makes for a very interesting Zen experience when trying to hold the razor steady. A bit like Ying and Yang on crack. What is great, though, is that you get a free workout with every attempt at opening them. Bit like siege breaking, only without the fun.

Collectability: There is one born every minute, and I am sure there is not only a buyers but also a collectors market, probably among members with a compulsive hoarding disorder.

Price: Even if you paid me, I would not want one of these. Apparently, they have now entered the market with custom scales and other bells and whistles. Well, I think that is great, as it will leave more quality razors in the market for those who refuse to skimp on something that will outlive them, anyhow.

Overall: I am sure someone with a commercial interest in these razors will chime in and tell me that this is just a horrible mistake, one-in-a-million chance of this happening, and Gold Dollars are in fact superb razors. Let me tell you, if there ever is a honemeister accreditation programme, this razor will be the challenge. Frown, smile, warp, and imminent need of replacement scales. A complete, and utter waste of money. Mind you, even if the edge were alright, this razor would require a scale replacement, and a thorough honing job. Estimated price including razor and various shipping charges: USD 60, or thereabout. Funnily enough, you can get a new Dovo "Best Quality" for the same money, only it will work out of the box, has a track record of reliably delivering value for money, and has a warranty.

In short: If the answer is, 'Gold Dollar', you have been asking the wrong question. Case closed. A resounding zero points overall, because this is not a razor.
Click to expand...

Just for the record: I believe that any commercial entity capable of letting such an utter dud enter the market (and there are more than just this one) deserves a boycott.

Sometimes, you're no fun :thumbdown:

So, how will you get rid of the frown (assuming you will not be boycotting)?

Well for the record I put out an offer to anyone who wanted to buy 2 of these,
if they sent them to me in return for 1 of them I would make them shave ready.
The result was that a member took me up on it, the gold dollars duly arrived,
1 needed a fair bit of work to correct a slight frown ( nothing like Robins)
and the other was sent back for replacement as the blade had a small
crack near the stabiliser, it's replacement came, and after reworking the bevel
now serves me well for testing, honing practice and even shaving.
So I guess you take a chance when you buy one, I have seen 3 so far and as stated
only 2 were any good, they both required work on my 400/1000 grit whetstone
and now live happily ever after.

:scared: Oh dear. After seeing the review that elaborates on what I was actually seeing in the photo I don't think I would buy another one. I think I should consider myself lucky to have received a decent one. Frankly I don't really find it all that interesting of a razor anyhow. It has no history behind it. It is not a work of art. It is merely a tool, and for that mine works.
You must log in or register to reply here.
Share:
Facebook Twitter Reddit Pinterest Tumblr WhatsApp Email Share Link
Menu
Log in
Register
Install the app
Top