I've added the data about n°51 to the Vault. Less than 10 minutes later BluntOtrauma already made the reservation.

This one is currently the Last of "Les Latneuses". If I have any saying in it, this one will be a Burton Series.
To my eyes, this one is a true beauty: It has an almost translucent pinkish overall hue, with more yellowish dots of varying width and a few straight lines in the same color. It gives this hone the appearance of an interstellar nebula. a few manganese traces run in almost perpendicular direction, like comets passing through. And then there's these beautiful red lines, telling a story of their own. That's how the Creamy side looks. It's impossible to catch on a picture, but I've tried anyway:
[img=900]http://www.coticule.be/tl_files/barts_pics/n%C2%B051-detail.jpg[/img]
[img=900]http://www.coticule.be/tl_files/barts_pics/n%C2%B051-front.jpg[/img]

On these Les Latneuses, I originally only tested the Creamy side, but on hones like this one, it's impossible to talk about an upside and a downside. It would be absolutely unjust to favor one side over the other.
The creamy side is Fast, with a capital F. It's acts pretty much the same like L#3, that you can see working on water in this
Please, Log in or Register to view URLs content!
Like all Les Latneuses, it has a very nice feedback and draw, as if there a magnetic force that helps keeping the razor stable on the hone (I even checked one of the Les Latneuses: it turned out just an appearance, and not a real magnetism).
This is an excellent hone for doing touch-ups, dues to the abrasive speed on water only. The edge of the creamy side is "engaging".

The hybrid side is a bit slower, but still above average for speed. There's a different feedback. It offers a glass-like sensation, with a fains hint of fine abrasion. Slurry dulling is minimal. You could shave right off (thin) slurry on this one. Finished on water, the edge qualifies as "mellow".

Damn! I missed another one ... Sleep, those little slices of death; Oh how I loathe them!

I know the feeling... I worked pretty hard at getting one.
K

In your expereince, wich layer is closest to Les Laneuses in terms of speed with water only? La Veinette, The fast side of La Nouvelle Vein or La Petite Blanche?

Is it also known what makes Les Latneuses so fast? Does it have a higher than average garnet content?

On water, not one of these. Some of the La Dressantes I've tested. These La Dressantes had part of the surface that left a peculiar black streak when the razor passed over that part. But the Les Latneuses have a more uniform speed on water.

I have no idea. More garnets? More aggressive one? Better exposed ones? Some other particles that play along? A combination of these factors? I have no clue how to investigate that.
I have noticed that these fast ones have a typical fine, yet mat texture on the surface. The hybrid side of Les Latneuses, for instance (which is much slower on water) has a more polished appearance, with on some parts even mirroring reflections.

All fast Coticules on water I've tested so far, all had that typical mat appearance. It makes me think of those cookies with a coffee-with-milk colored glaze that my grandmother used to drink with her coffee. I can't remember their name.

No, they were rectangular, and rather thin. With a very flat surface of some kind of hard frosted sugar.

I'm not sure why I care, but I do... Shortbread cookie with some glaze on it?

Found it.
Here it is:

In my memory, there used to be a lighter version as well.

My little 10x4 cm stone has the same thing. There's one small part that leaves a black streak and removes a lot of metal. I'm guessing that part has a high garnet content.

I know exactly what cookie you're talking about and the kind of mat appearance (I think). My 10x4 is the same way. Maurice and Rob don't know what layer it's from wich would suggest there are other layers besides Les Latneuses that are very fast. Maybe some haven't even been discovered yet.

Bart, maybe I haven't yet had my nightly sip of wine, but that photo... looks like... a Coticule.

Now, if she was in fact eating those precious stones I would understand why are the Czar-O-Coticule... but please, say is ain't so.:cry:

No, they are cookies. They're called Café Noir, and there are several brands who still make them.

I've never honed a razor on them, but they do taste fine.

I would like backup on this one if the deal falls through.
B

A little feed back.

Ive been out of the razor loop for a while an have grown some epic beards.
I was bored one day an got the razor and hone out and started on a journey.

After trying to hone my razor or rather touch it up I found the hybrid side to have small highs and lows but it didnt effect the end result. Without much experience honing I refered to the vault for results.

I dry tested it on my face and arm. It could do the job and Im sure with more practice it will do a better job.
Why am I posting ?
Is a finisher really necessary?
If a finisher is really necessary which would complement the stone the best ?

That stone is an excellent finisher in its own right, but it will take you a little time to learn it well enough to get its best results. It's great to see you posting about that one!
A

Here's a picture that I shot of the hybrid side of n°51 when it was still in my custody.

This is the typical view of a fully exposed hybrid side, and I don't expect that you'd ever get a completely uniform looking surface, no matter how deep you were going to lap into that part of a Les Latneuses.

These hybrids remind me entirely too much of novaculite, especially given how hard it is to lap them both. I bet if novaculite had a bit of garnet in it too, it would act very similarly.

Wow absolutely stunning! I thinks this one beats mine. It's a Les Lats and a looker too! That is an unbelievable coti bluntotrauma! Treat here well. I was going to say that if you ever want to get rid of her I'd gladly pay double the price you paid, but after taking a look I see you already paid a hefty price (but well worth it!).

Here's a pick of mine for reference (of course pictures never do them justice): 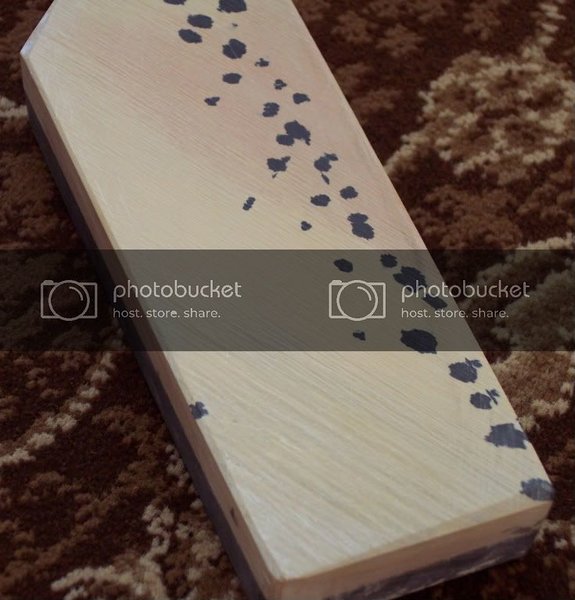