West Coast Shaving recently released the first in a series of razor heads designed by Charcoal Goods . Unlike the previous collaboration where CG actually built a series of stainless steel razors for WCS, it seems that CG had nothing to do with the manufacturing or selling of these razor heads. All will feature a pent cap where the angle is mostly set and if you follow it, you should get a decent shave. The first in the series is the Lithe and the pent cap is paired with a middle level base very similar to the EJ 89. It's price point of $10 suggest it being made in China and is chrome over a zinc alloy. For the other two in the series, one will have a slightly more aggressive base plate similar to the RR Mentor or Maggard V3a, and the other will be an OC.

The resemblance of the Lithe to the plastic Alfa Razor from Czech Republic was so striking that instead of trying out the Lithe first, I immediately pulled out my Alfa and did a shave off between the two. 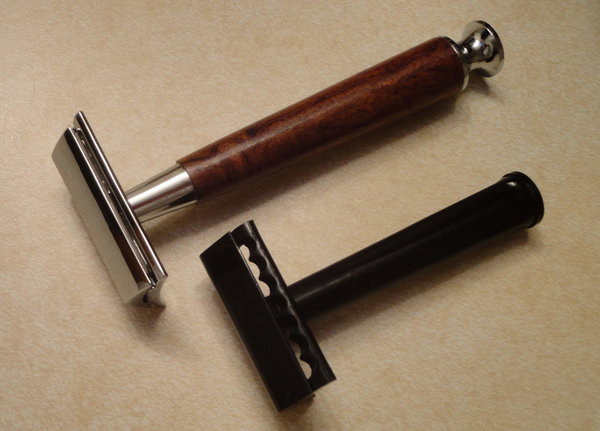 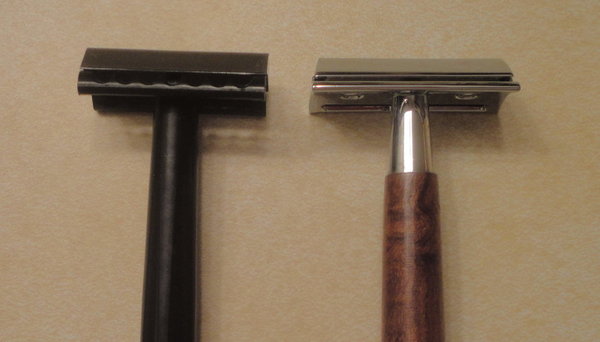 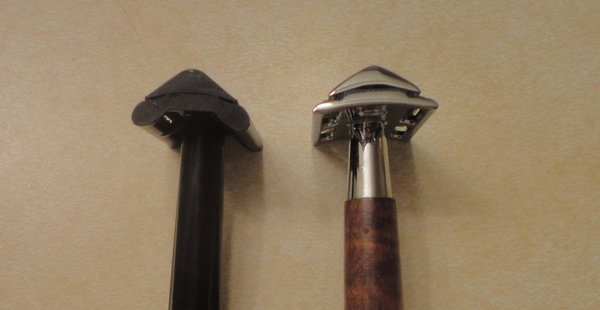 The Lithe shaved the left side of my face and the Alfa, the right side. A comparison of the caps showed that the angle was almost identical, however the base plates were different. The Lithe was just a smooth bar, however the Alfa had wide scallops similar to the aggressive side of the Neilite 400. Both razors handled WTG exceptionally well and the given angle gave a very close pass. The only problem was under the nose where both suffered the same problem of getting close to the nose area.

ATG also went smoothly and was able to get the places left behind under the nose very easily as the angle now favored going under the nose. After two passes, I found that the Alfa was the more efficient shaver, although both were very good two pass plus touch up razors. The Lithe had the advantage of having weight and balance, however the Alfa was very light and nimble, not unlike any other shave offs where I compare a stainless steel razor with a bakelite.

Still, the Lithe is a very efficient razor and at it's price point, it is worth getting. For those of you on the other side of the pond, it might be easier (and cheaper) to seek an Alfa Razor from a Czech vendor. 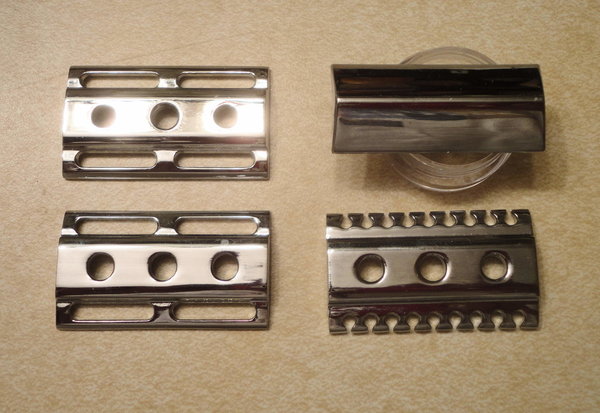 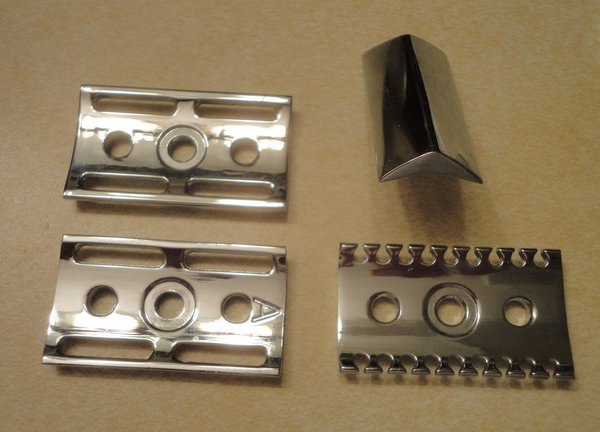 Because the original Lithe base plate and the Brawny looked almost identical, the Brawny had an A cast on the bottom. I have not decided yet if I will be taking out my bottle of red paint for this one.

The Toothsome does not appear as a normal OC. It looks like an ATT Windsor with the safety bar cut off. WCS claimed that this razor was designed by Brian over at Charcoal Goods, but I can't see what was going through his mind when he designed the OC base plate.

I decided to shave first with the OC base plate as it was so unusual of a design. That was truly a mistake.The shave was rough and lather flow was almost non existent. It took me three passes plus touch up to get something better than a DFS. I personally enjoy shaving with an OC razor, however this one is definitely the exception. I may see if I can get a better shave using a regular cap, or this may just go into immediate storage.

Gah, 20 Euro for the heads + 20 Euro Shipping, and my experience is the officers regard shipping costs as 'value' so the total is above the free 25 or some such, adding 20% BTW Tax, and import Tax (no clue how high that is). What a shame, they look like something i would enjoy

It s not that bad. Importduties in The Netherlands are zero of you buy anything below 22 euro’s