A gift! Great people out there!

:thumbup: I met a fellow about my age in an antique shop, Said he had some razors. I got his phone number and gave him a call about a week or so later and drove over to his home; very modest and well kept. Yes, he had razors!! about 200-400, all polished as new and beautifully displayed. It took about an hour to get the drool off me brogans after I got home.
Cutting to the chase, I gave him a rough estimate of some of his razors, ones that I have seen go for $300-800USD at the least he has $15K and probably over 30K$US. He called his wife into the room..she was ecstatic!!
He asked me to look at some other stuff and I pointed out the hones he had and gave a fair "high" estimate of each one. He said " Do you hone?, I said "yes." He gave me these three!:; 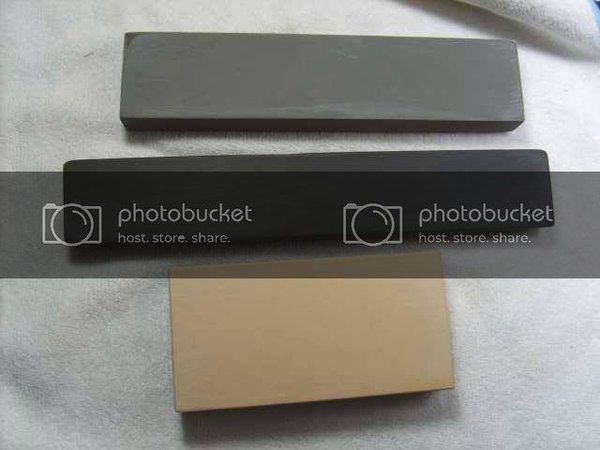 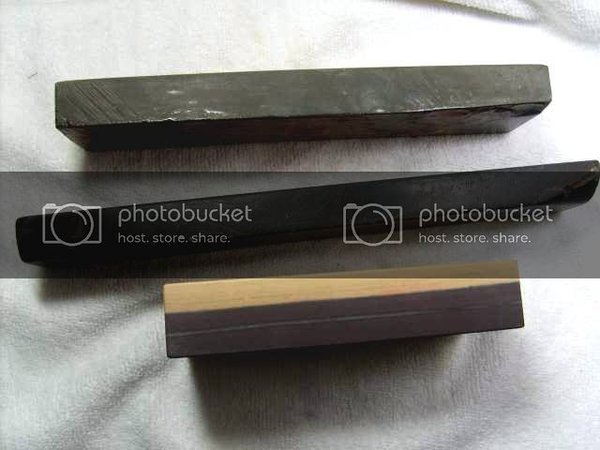 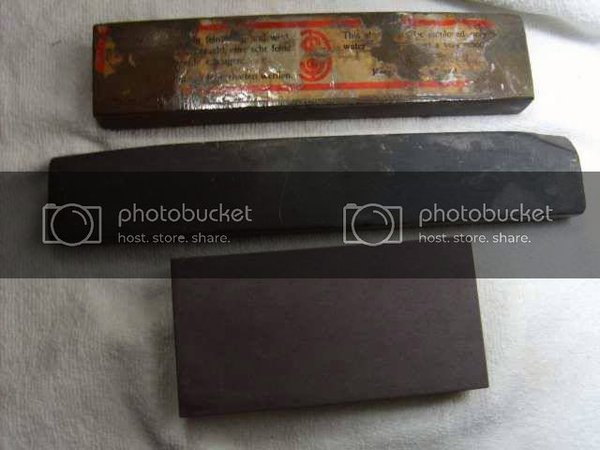 So I am asking what is the middle dark one?? Very fine, it lapped with a darker green slurry than did the other slate type. The shine was as found and not the usual Thuringian scruffy/moldy look. 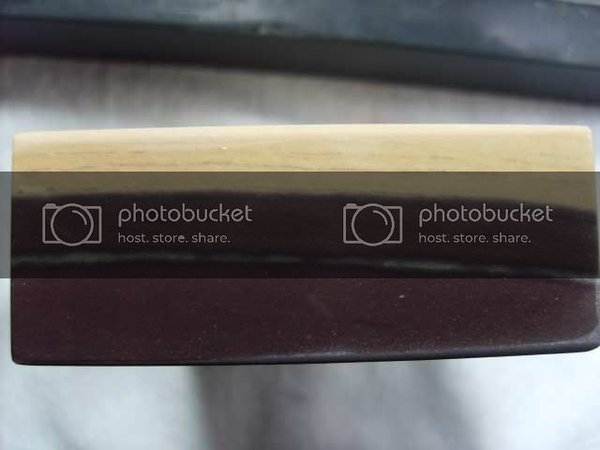 And what is the designation of the Coticule natural.
Respectfully
~Richard
PS. I am sworn to secrecy about the location.

What a great story. And nice gifts, too! :thumbup: Yet, I can hardly see a point of paying $800 for a razor, but well, once you start collecting, items' value can change significantly for sure.

Not that I wander around antique shops heavily, but I walked in a few in my city and I saw only two razors, in rather poor condition. :| Some are lucky...
regards,
Matt

Thanks for sharing a heart-warming story of generosity. :thumbup:

Just so that you know, I am driving straight to your home now. I think you got to go one step more - let the visitor choose from your stones.

Should you ever return, please take your camera with you...

btw I have no idea on the top stone if its not a Thuringian/Escher? the middle one looks like a Charnley forest, mine left the edge too crispy for my fine features, although I do miss it, and the bottom yellow and blue one, looms like one of those weird Belgian ones! lol

Hello, I guess there is no understanding a collector..The fellow just likes the look of Razors.:thumbup:
One of the very interesting razors: 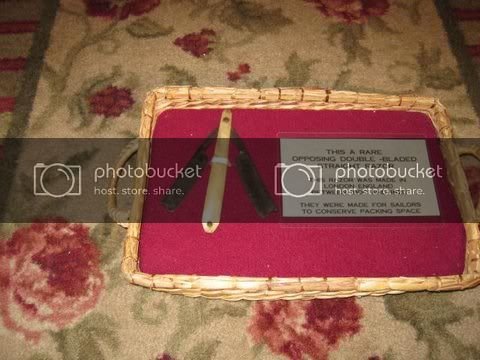 thanks for looking!
Respectfully
~Richard

Since Bart asked, the gentleman sent these: 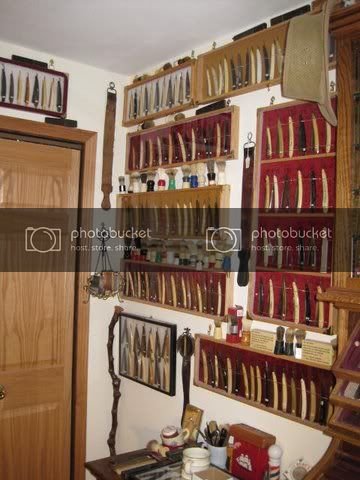 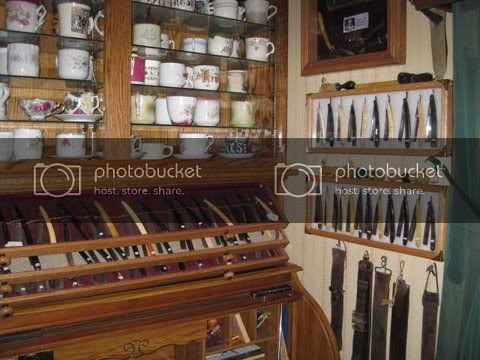 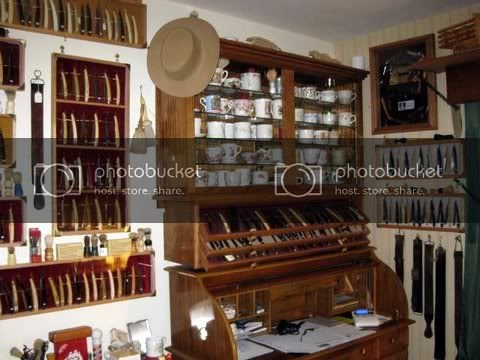 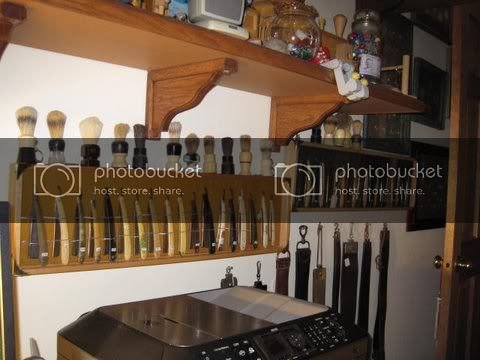 Respectfully
Richard
PS, His "Cabinetry" and shadow boxes are all his own work and his workshop cabinets and benches look better than most folks Kitchens.
He also collects edged tools and other neat stuff.

Holy s... that`s a lot of razors! I`m sure glad I dont collect them :-/
Though there is something ...not right...about gathering so many items,locking them up in a display box,and most likely,never use them as intended..

Though, if he feels the urge to give more items away,I might be inclined to accept a couple of hundred razors Just to help the guy out,offcourse..

Well, In the area which I live, there are very few to almost no decent old razors available. And, those I find are usually the sick, halt, and lame if not downright rusty crud. So, I applaud those who have taken the time to restore to original glory and become the razor caretakers for a generation or two or three of the throw away oriented "Me" generations.

Persons like this may become the link between the skipped generations that respect/ed quality and utility. Look at the changes in the Coticule fortunes, a few years back I have heard that bouts were hard to give away and only perfect specimens were salable.

If one goes to any online auction, many collections are being distributed and more folks now have the advantage of purchasing well kept quality razors than ever before and at a price that is often very much less than many poorly made new wave razors let alone the crap that looks like razors..

More power to collectors, I am not in that class but appreciate their existence!
Respectfully
~Richard

Thank you Richard (and the sir razor collector), for sharing the pictures. Quite the collection!

I too, don't have much collector's blood running through my veins, but I share your sentiment and admiration for the true Collector.
:thumbup:

Hi Bart,
I will pass on your thanks! He and his have enjoyed the comments here.

I believe that a "True Collector" is a good thing. The problems often lie with the "Accumulator" that buys up everything they can find and then squirrels such finds away forever. Then due to rot the accumulation is tossed by the inheriting descendants who have no idea of value; since they don't, it is worthless to them. I also find that when a geezer passes on that surviving wives tend to throw all out. Or even before that!:thumbdown:

I have taken pains to point out the value of my minor collection to my kids and try to repair the ebay and junk shop saves so they are in good condition.
Respectfully
~Richard

Indeed. The distinction between the Collector and the Hoarder is an important one. The mere fact that the gentlemen took the trouble to organize his collection in an attractive and appealing manner shows a true love for the objects he gathers. Not just an insatiable urge to hoard.

Please send your friend my regards. As a passionate woodworker, I cannot else but to admire the cabinet with the three horizontal drawers/shelves. Beautiful.

Who knows... maybe the better way of life and relief is hidden there:


How self-delusional can one get?

Well, that's because HE bought them before you got to them

Both posts above have a lot of truth in them.:thumbup:
Howsomever, I did live in Japan with a 3x4meter space and a cabinet on the end wall made up all the furniture, and a common kitchen downstairs made up the cooking arrangements. And..well won't go there, we went there.
I moved into a remodeled small 8x8meter home and had a couple pieces of wicker furniture and a book case. Yetch. I had moved 22 times in an eleven year period and finally I could have STUFF! A machine shop in basement, Collection of espresso machines..now sold but for a Cremina. Now I have stuff and am starting to downsize due to my age. Hone keepers are not yet finalized. Razors are keepers and users till I downsize and am ready to drool in me oaties..
Respectfully
~Richard
W

What a great razor collection. And how thoughtful of your friend to gift you with those hones. There truly are good people left in the world.
D