With the arrival of the latest Chinese clone heads, I thought I would start this thread for Chinese razor heads. The thread does not have to be related to Chinese clones directly, but can include unique Chinese designs (like that face shredder Yaqi Ares slant).

I will be starting this off with one of the two clone heads I received yesterday - the Bevel head design with scalloped guard. 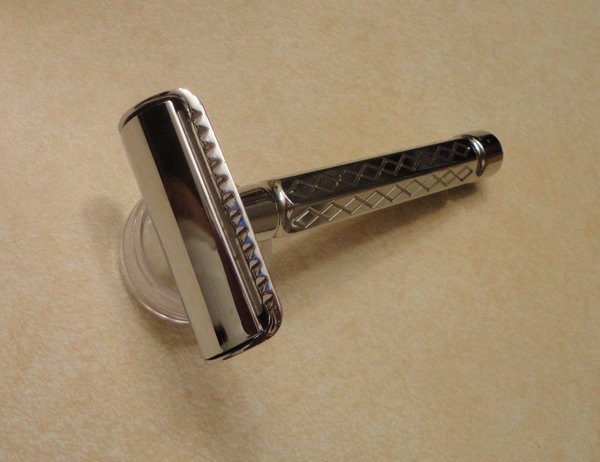 Since my Diamondback cap is still not back, I used the handle for my clone head. For those that remember the Bevel razor, it started life as a subscription razor system where there was a Bevel Razor and a whole host of prep things and the purpose was to combat ingrown facial hair. The razor was originally an Indian design and manufacture and the Bombay Shaving Company sold the razor alone with a mild and aggressive base plate (both smooth bars). Bevel sold the razor with only the mild base plate as it was designed for folks needing to be weaned off of cartridge razors (which caused ingrown hair)

The base plate was unique in that it had "wings"on each end to enclose the sides of the cap. While a nice touch, it did make the head longer than necessary.

Tonight's shave, I started my WTG pass and found immediately that the shave was significantly more blade feel than what I remembered the Bevel to have. I realized that the scallops actually had the effect of an open comb and so I adjusted my angle a bit and did my usual two pass plus touch up. Because of the size of the head, it was hard to maneuver under my nose, and overall the shave did have more blade feel than I prefer, however in the end I has a very good BBS. So I would have to rate this clone slightly better than the original as far as shaving goes, and slightly worse than the original as far as build quality goes, but one must remember that this is a $3 razor head.

The whole reason I decided to modify my no razor restraint was because I was interested in the latest Chinese clone - the Muhle R41.

Since showing it last night, I have been able to work through it so that the cap mostly seats properly, although I have to pry it off with a screw driver when I want to load and unload a blade. I pulled out my R41 with the fake tortoise shell handle to compare. Yes, the Chinese also cloned the gold Muhle handle (which came from a different place and so these two separate pieces can not be considered one razor purchase).

The heads were almost identical, except for the badly shaped holes for the alignment pins and the overall poor quality of the clone. 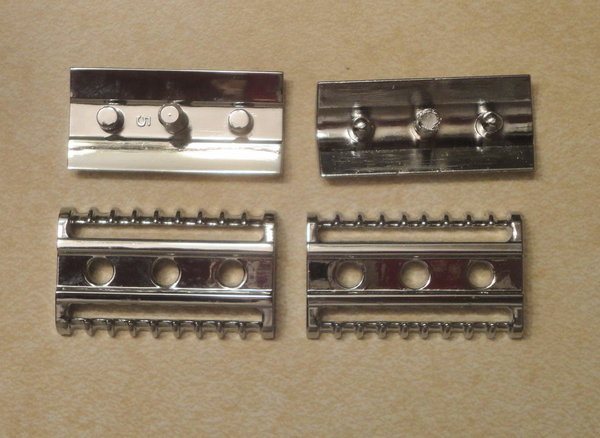 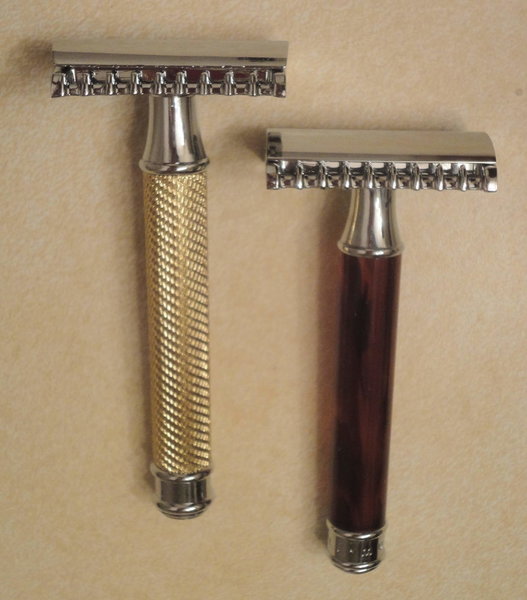 Tomorrow, I will attempt a shave with $7 R41 clone and hope that my face looks the same as tonight. The alignment looks like it might work, although I have a backup razor at the first sign of trouble. 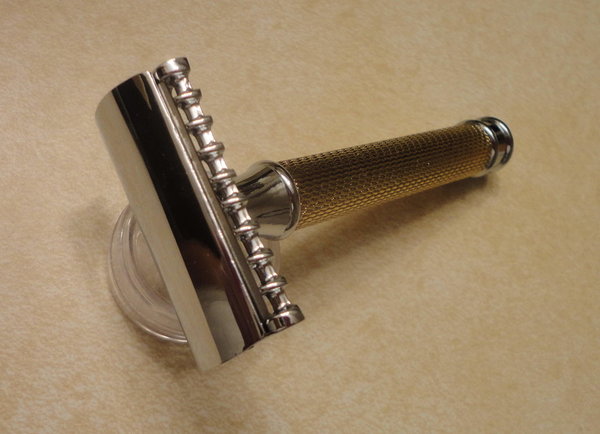 I'm getting more and more respect for you because shaving with an R41-2013 isn't everyone's cup of tea but shaving with the Chinese R41 is quite a challenge considering the poor finish.

Cant wait to read the Review. I have one 41 clone ordered too.

Let me know if the whole batch has the problem that mine does or if it is just mine. If the shave is good, I might order another that does not have my problem since they already refunded me my $3.

Tonight was my dreaded shave with the R41 clone with the ill fitting cap. I started out with my normal R41 angle and found much blade feel. Not having shaved with the 2011 version of the R41, this felt like what most folks described. I immediately adjusted my angle to use more cap and it settled down a bit, but the blade feel was still present. I am not sure if it was designed that way, or if it was the ill fitting cap. WTG was very efficient, and so that was a good thing. When I started ATG, I had some blade chatter shaving under my chin and so I am strongly believing that it was the ill fitting blade.

The good part is that I again ended up with a two pass BBS with minimal touch up. The bad part was that the shave was on the rough side similar to the Bevel clone of last night. Again, Muhle does not have to worry for now.

@Captain Future, very important that you let us know if the fit problem is just for my razor head, or if your have the same problem. If it is just mine, I might order another head just to fully judge the performance of this razor.

I will report as soon as the parcel arrives.

I can see the Kings influence here.
Cheers!
Richard

No, this argument is too transparent even for me. You'd be poking right through it. 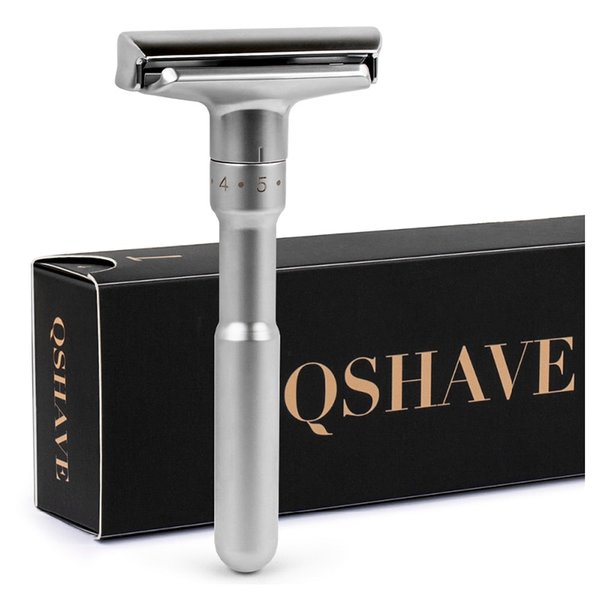 At Alixpress I bought a Merkur Future clone from QShave last year.
A few years ago I sold my Merkur because the curiosity for new razors made the collection expand too much.

The QShave, as I expected beforehand, would be a bad copy that would also have to be of poor quality, partly because I only had to pay $ 7 including shipping.
This is in contrast to a Merkur that quickly had to cost $ 85 include shipping

But the build quality of the QShave was just very good and also the shaving properties are great.
For this reason this scraper is an absolute topper.

It has been quite a while since anything was posted in this thread. Tonight I present the cheap Yintal clone of the Feather AS-D2. A while ago on another forum, someone mentioned that the Chinese had cloned the AS-D2, but many of us pointed out that they had only cloned the handle, and not very well. Today, I present to you the cloning of the entire razor. Of course, the clone is on the left and the Feather is on the right, and if you get confused, Feather is written on the cap and base plate. 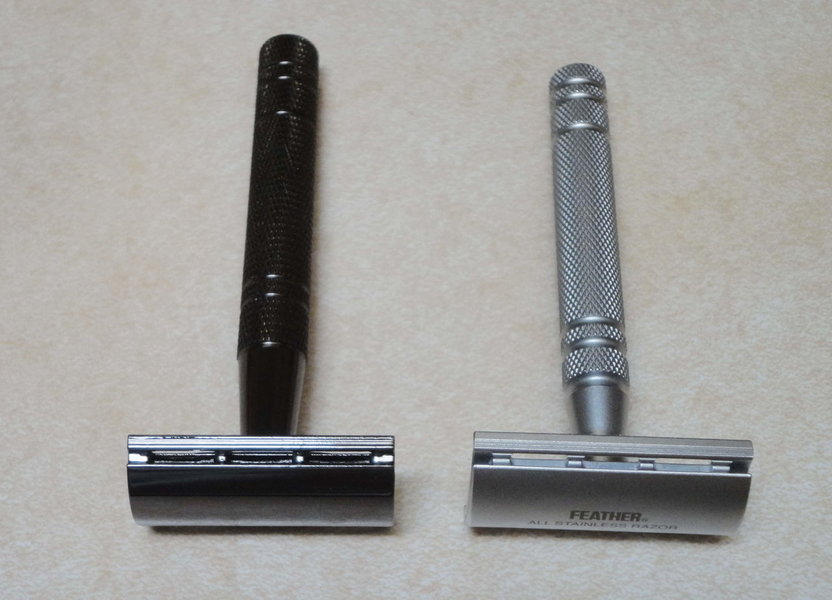 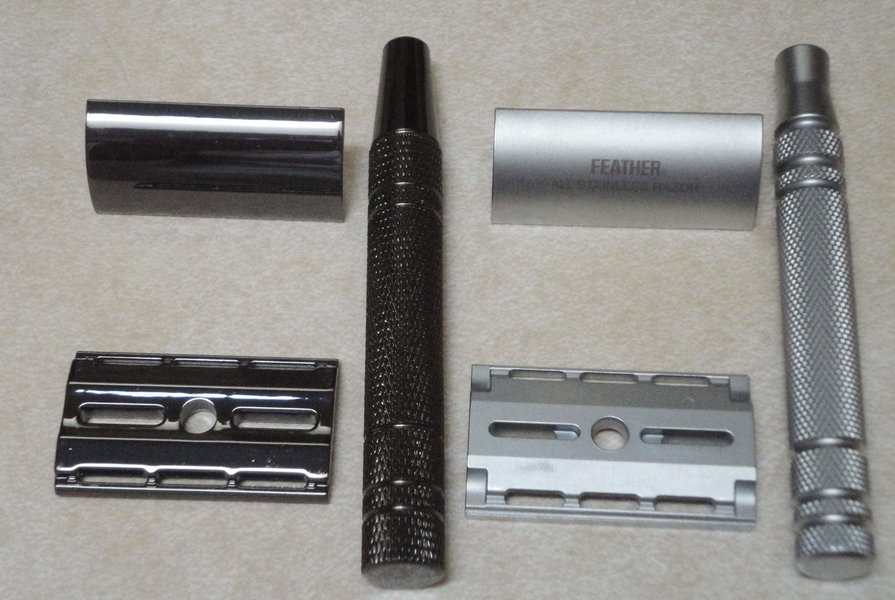 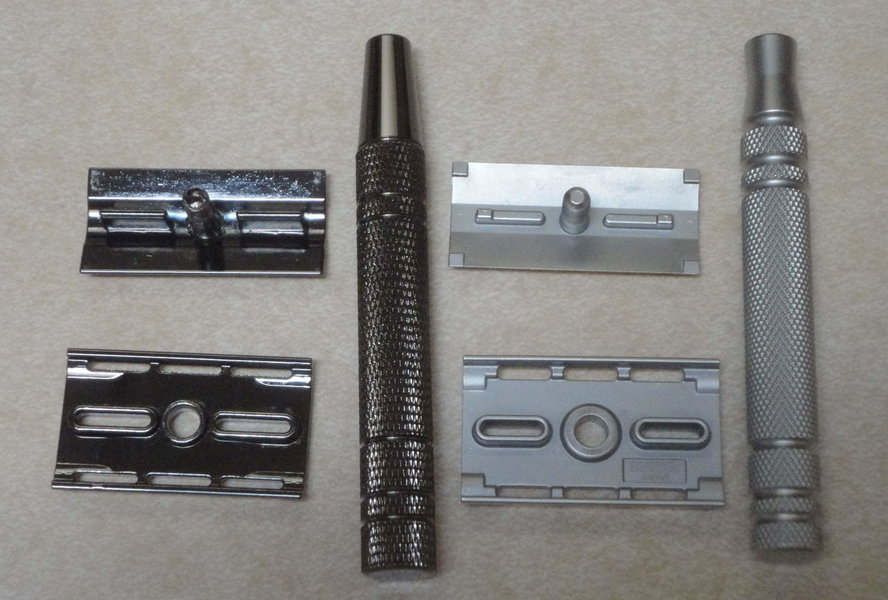 First thing I noticed as I was disassembling the clone was that it was significantly lighter than the original Yintal I bought a couple of years ago (with the Feather clone handle and the RR Mentor head). Aliexpress said that the handle was aluminum and the head was zamak. The handle definitely feels like aluminum, however the head feels lighter than zamak. Perhaps it is because the parts are relatively thin.

The cap on the clone is missing the end tabs which secured the corners of the blade like the original Techs. In relation to that, the base plate is also missing the cutouts in the corners to fit the tabs. The base plate of the clone also is curved inward along the center instead of being flat like the original, which necessitated the blade alignment tabs in the middle of the cap to be slightly longer than the AS-D2.

First shave tonight with the Yintal was quite interesting. First thing I noticed was that unlike the AS-D2, the Yintal did have the blade very minimally protruding from the sides. I used the blades that came with the Yintal (which might not have been a good idea). The box did not have any markings on it except the works "Double Edge Blades". the blade itself did not have any markings at all, except some glue marks which was characteristic of genuine Feather blades and so they cloned that too.

WTG pass surprised me because there was significant blade feel, and adjusting the angle toward the cap did not lessen the blade feel significantly. The WTG pass left a lot more stubble than I was expecting. For my ATG pass, I resorted to what I had learned with the Nealon razor, and rode the guard almost perpendicular to my face. Surprisingly, that was the preferred angle for this razor as blade feel was not as much as with the WTG pass and all the stubble that was left over from the WTG pass was cleaned up with the ATG pass. I did an XTG pass along my jaw line and under my chin because that is what I usually do when shaving with an unfamiliar razor for the first time, and I ended up with a BBS.

Although this razor looks similar to an AS-D2, shaving with one will immediately tell you that looks are deceiving. It certainly does not shave like an AS-D2, but it is a very efficient shaver with slightly more blade feel and a very different angle.

Okay so this one is not necessarily a clone of any razor, except maybe a Chinese attempt at the Mvltiplex, except it takes only two blades and uses regular DE blades, but only one side at a time. I am not sure what the designer was smoking at the time, but it certainly produced something different. 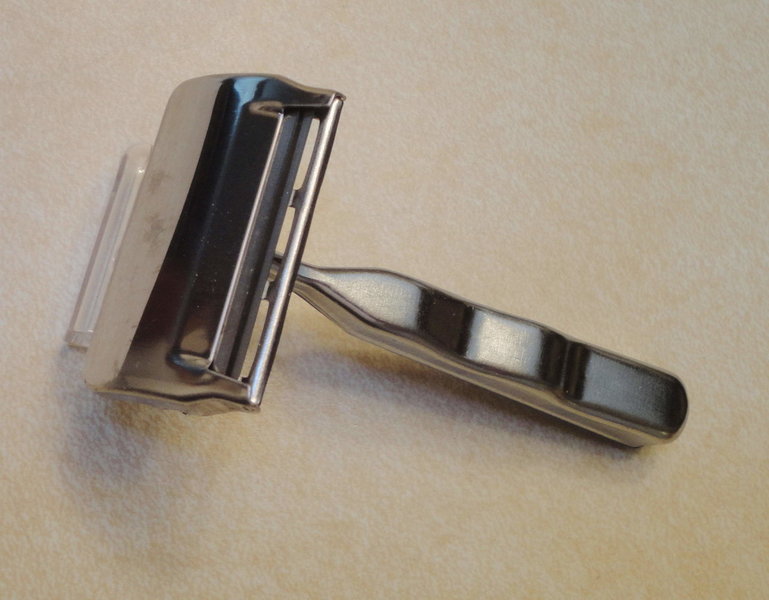 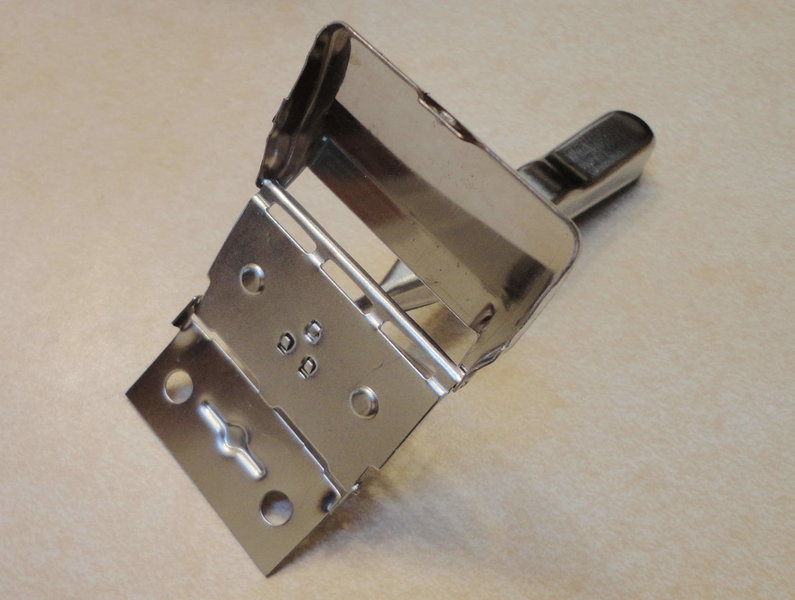 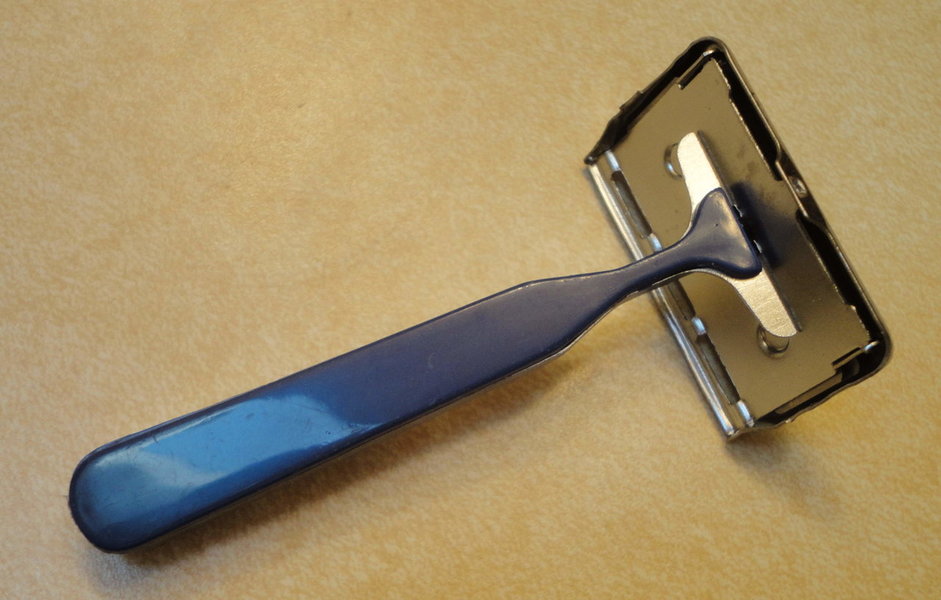 The plates that hold the blades are hinged and when one blade is placed on the bottom, the other plate folds on top of it and the other blade is laid down. The cap is then carefully clamped in place similar to the Gem Shovelhead.

This produces a twin blade shaving surface that is slightly beveled like the old Gem razors and the size is similar. I made sure I shaved tonight in case of an accident where I did not have to appear in public until Monday. It turned out that it was an unnecessary precaution.

WTG pass started out quite rough and I searched for the proper angle, which really was not following the bevel. I eventually found a good angle and completed the pass but leaving a lot of stubble left over. ATG pass went much better and I got it very close to a DFS+. I decided to finish off with my usual XTG pass along the jaw line and under my chin and came out with a very comfortable BBS.

This Bouble Edged razor (read the box from my other post) actually surprised me in that it gave a decent shave. Maybe the next version will have three more blades so @efsk can add it to his Voss Razor Museum.