Double succes (and a little bonus)

Today was a really good day (besides having a mild flu).

In the past hour-and-a-half I revisited my La Verte (I think it is, anyway, thanks Ronny!):

I retouched my Theo A. Kochs Apex, I got a HHT 3/4 quite inconsistently along the edge after stropping. 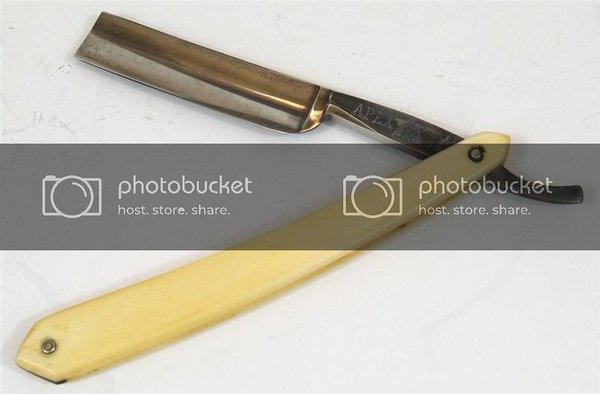 So I put on two layers of tape (one more than before), and after three sets of half-strokes on a very thin slurry I did thirty X-strokes on water with the left-over slurry on the blade, another thirty with a clean blade on clear water. Lo and behold :scared: HHT 4 off the stone! After hitting my 2.5" Scrupleworks worsted wool/leather, 90:100, it is pretty near to a HHT 5 all across the edge.

So that, for me, was a confidence boost I very much needed after struggling very hard with my Clauberg and all three coticules I own that would not get anywhere near a decent bevel (which, incidentally, I pretty much managed to get after, as Bart recommended, hitting the La Veinette with a thick-ish slurry and gradual reduced pressure for about half an hour straight, woop-dee-doo!)

AND I hurled my recently restored and honed Mabenso (Machenbach & Benz) first on the La Verte, then the Scrupleworks, then on the floor, along with one drop of blood from a fortunately failed attempt to catch it.

Amazingly (probably due to the fact that whe have a laminate floor instead of a tiled one, the gods be praised) it got away with a minor ding in the edge near the tip. I revisited the La Verte, doing an abridged bevel repair and dilucot on just the tip. Finished off with a set of thirty X-strokes along the entire edge, stropped again - now utilising a ratio of 'only' 50:75 wool/leather, with focus on the tip - and now a consistent HHT 4, also on the tip. You can still see a slight breaking of the light on the tip, but luckily it was no chipping and pretty much works as I'd expect a wavy edge to function: perfectly, it's reduced to an aesthetic flaw, and a minor one at that.

And the cherry on top of the cake: I didn't screw up my strop this time (last two times I nicked the Scrupleworks, sorry Torolf )!

SO IN SHORT: Tie me to a chair, beat me with a stick and call me grandma! Another adventure-packed day in the life of Pieter 'I-wish-I-had-a-cigar-smoking-chimp-driving-a-firetruck' K. Cuck-a-doodle-doooo!

And now I'm off to the sauna, so y'all can just bugger off. B)

A good result Peter.:thumbup: But i am not sure for the reason you taped twice the razor.
Best regards
Emmanuel

I've only had those killer edges a few times from my stones - I'm an underachiever w/ the coti. When they did happen, it made my day. One was last night on a nice old Geneva. I got the wild hair to try something different and slurried a 6x2 Dressante w/ a low quality thuringian stone, diluting to very light slurry. One set of 30 1/2 strokes with pressure, 30 x-strokes, dilute, one set of 25 1/2 strokes w/ lighter pressure, 30 x-strokes w/ the last 15 having no pressure. HHT3-4 from the stones, stropped 100 strokes on newspaper over a hard stone, and the length of the edge was at HHT4 - no linen or leather stropping yet. I tried to repeat w/ an extra hollow, and results were nowhere near the prior effort. When the magic works, its great. I've had it just often enough to keep me stroking on the Belgian rocks.

Emmanuel. If one uses a single layer of tape for honing (not all do & there seems to be strong feelings about tape or not), the 2nd layer would be required for the unicot method - effectively a double bevel method.

Well done Sir! :thumbup:
Now go grow a beard and shave it off

True but with 3 sets of half strokes, the secondary bevel would be much wider than a standard Unicot bevel, thus negating the advantage the method gives

Yep Ralf. Thats why i am wondering.
Best regards
Emmanuel

Well, ok, but whatever the case was, Pieter did get a secondary bevel. Even if it's wider due to extra laps, it's still a secondary, Unicot bevel, only it won't be so easily refreshed during next honings, right, chaps?

It will I imagine refresh just like any other edge, as long as the same two layers of tape are used

My point was that the results are not down to achieving a minute secondary bevel ala Unicot, however you're quite right that Pieter created a second bevel, mind you 3 sets of half strokes, is what it often takes me to set a bevel from dulled on glass

Emmanuel, Thx to Dr. Ralphy - I see what you meant. Thank you both.

I indeed meant to go for a secondary bevel, hence the tape. The slurry I used was very light (once back and forward with the slurry stone) and three sets to get the heel, toe and once more to get the entire edge (which indeed might be considered overdoing it a bit).

But the slurry being so thin, I'm not sure if the effect has been so dramatic, I haven't checked with a microscope or nothing, though. Thanks for the heads up, anyway.

The main idea behind the two layers was that I was trying something different to see if it works, that's all really. But now you've got me doubting it had any effect on the sharpness. Which is a good thing, because it means my honing skills are improving. B)

your welcome, Hope you get better, glad that you're happy with the stones
Practice for a Long Long Time and All Is Coming

Thanks. I find Pink lather is always one of the most polite member in coticule.be
Best regards
Emmanuel