For those that visit the shaving forums in the US, you may be aware of Dragonsbeard (Frank) who has officially started his line of soaps and skin food called Ethos Grooming Essentials. His products are not cheap, however many have said favorable things about it. His latest creation is a collaboration with CBL Soaps, which many here are familiar with at least in name. CBL made the soap taking direction from Dragonsbeard, and Dragonsbeard was responsible for the skin food. Since I am a loyal supporter of CBL soaps, I decided to splurge on this soap.

The soap had the normal ingredients in it, however it also added goat AND camel milk along with lime essential oil. I was hesitant at first because it contained synthetic menthol, which most menthol products make my face feel like a thousand needles are poking into it after shaving, however I took a chance anyway. Lathering was extremely easy. I used a damp Fan shaped Manchurian, and in only about 10 seconds, I had enough soap to build a very rich lather. This is a thirsty soap and so I had to continually dip the tip of the brush in warm water which was great because I like the feel of a warm brush while lathering. The shave itself went extremely well with a lot of slickness and cushion so the blade practically glided over my face. Later, a dry touch up still felt smooth as if lather was still there. The lime scent was very noticeable throughout the shave and even when I opened the envelope that the soap came in. It was not an overpowering scent, but it still subtly lingers an hour after the shave. My face felt very refreshed after the shave and still feel that way now. The synthetic menthol was just enough to cool my face during the shave, but no needles afterwards. I have to say that of all my expensive and overpriced soaps, this one I am impressed with the most. 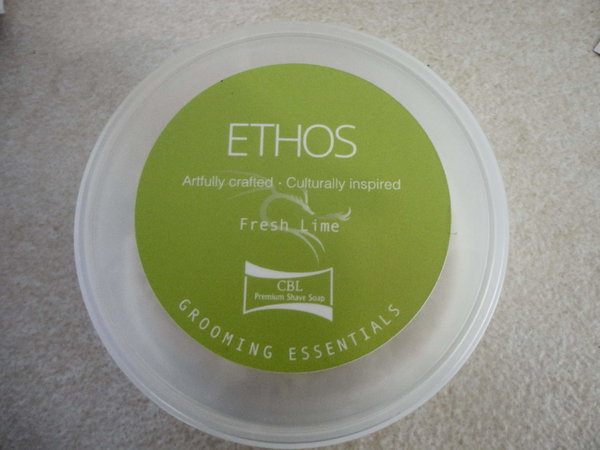 Moderator
SU-Patron Gold
The way you are describing it, it seems the scent is lime, and that's it? Does it smell like a natural fresh lime?
Cheers!
Richard

Enough for me to want to stick a chunk in the top of a bottle of Corona (the beer and not the virus). It is a very pure natural lime scent and nothing else.

Is the smell of the Lime similar to the CBL Fresh Lime ?

I have not tried the CBL Fresh Lime, but I would think that the Ethos has a more natural lime scent because it uses cold pressed lime essential oil. It is a very natural lime scent that is not overpowering but always present throughout the shave and even a while afterwards. Lime has never been my favorite shaving soap scent, but this one is an exception.