SU-Patron
Executive shaving will bring a new razor on the market. It is Made of 316 Stainless Steel. There will be two handles: a normal one and a handle with extra grip. The blade will be fully enclosed, which is a big advantage for me. In my opinion the razor looks good! Intro price will be around 100 GBP. 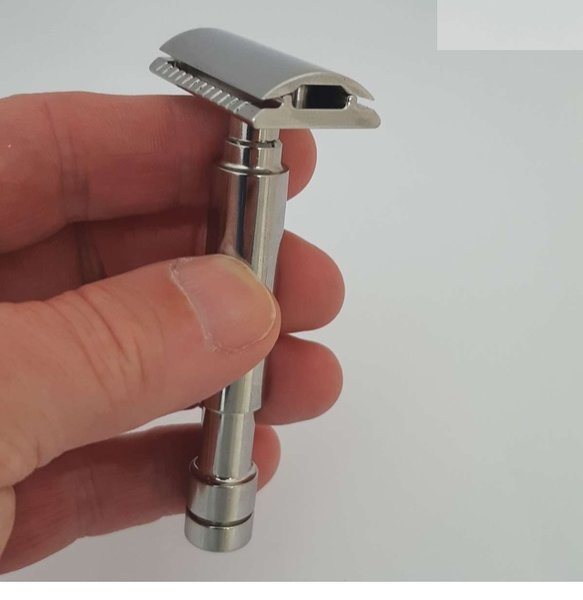 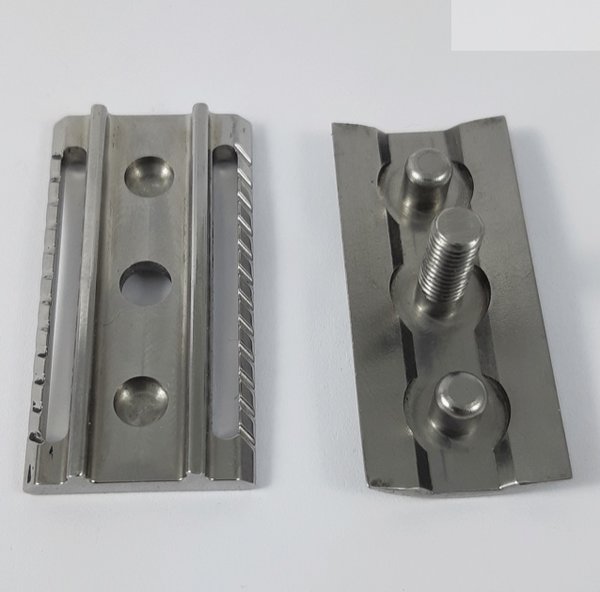 When I looked at the directory on top, I was surprised to see that there already was an entry for Executive Shaving AND for the Outlaw. I just received mine last night and my first shave was tonight. The razor is actually a rebranded Alpha Shaving Outlaw. alpha Shaving is the ones that make those metal handles for shaving brushes. The main difference between the ES version and the Alpha version is that the ES version has a polished handle to match the head. the Alpha version has a satin handle and a polished head. ES also offers an optional handle looking similar to the one that is in the picture above.

Overall workmanship is quite good. Fit and finish is great. The balance is also good, but slightly on the heavy side. From the design of the handle, I don't think anyone would complain about it being too slippery. 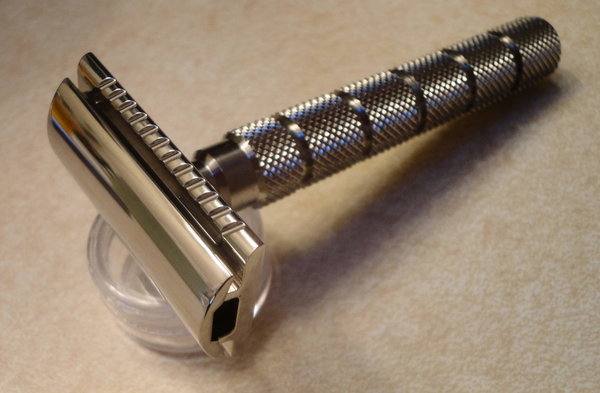 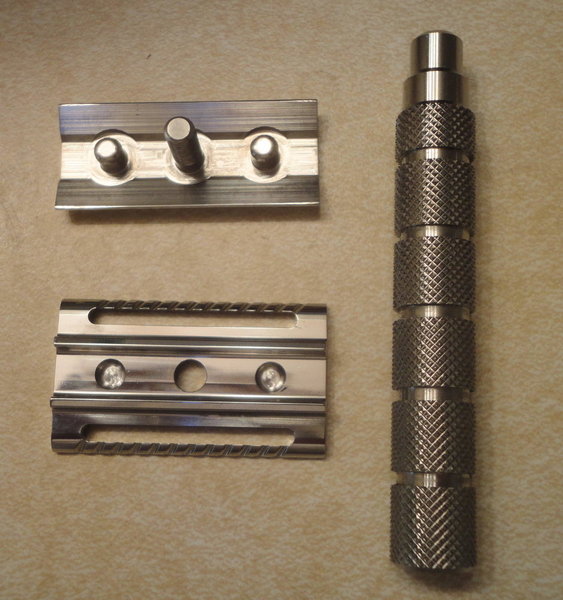 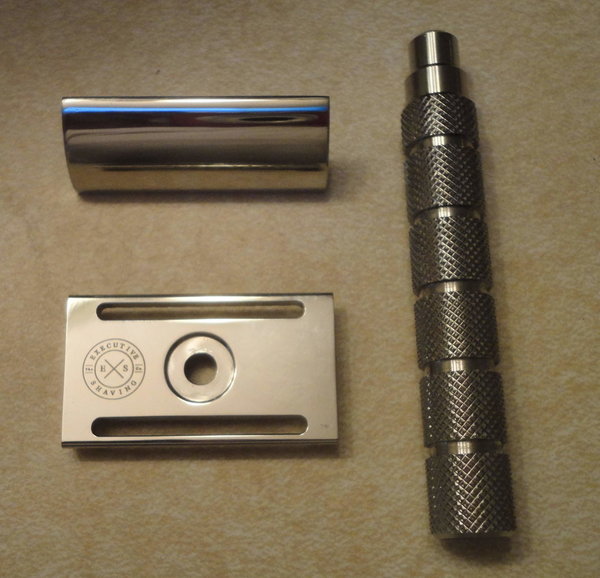 One thing I noticed immediately as I started my WTG pass was that the razor was quite noisy. Usually razors do not have blade chatter on the WTG pass. This one did. The shave was smooth, but not as efficient as I expected on the first pass, even after trying different angles. ATG pass was also noisy, but was efficient enough to clear what was left from the WTG pass. I did a partial XTG pass along my jawbone and under my chin and needed to stretch my skin, but eventually I ended up with a BBS.

Tomorrow night I will switch to a new blade and possibly a thicker one to see if the blade chatter goes away and the shave is more efficient.

I also received a Braveheart head which is a rebranded Goodfellas Smile, and can see eventually comparing the shaves between a $120 razor and a $20 razor head. I am hoping that things go better tomorrow night.

I had a chance to shave with the Outlaw a couple of times now and changing to a new blade that was thicker did help in reducing the blade chatter, however not completely. The razor shaves very smooth but has a very small angle which it is effective. Too little and it just moves lather, too much and it sounds like you are scraping a credit card against your face (and having it cut as much). Finding that correct angle rewards you with a very good two pass BBS.

So last night I took out the Braveheart head and shaved with the same blade I used in my original shave, which is a blade that was two shaves away from being tossed. The Braveheart head has a slightly lower blade mount and the bottom of the base plate is extended downward similar to an RFB or Hybrid Tech. 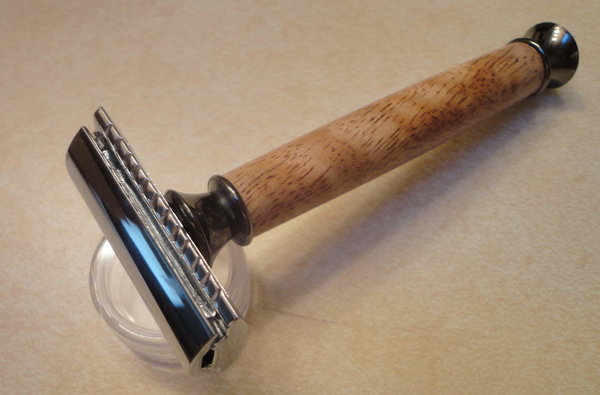 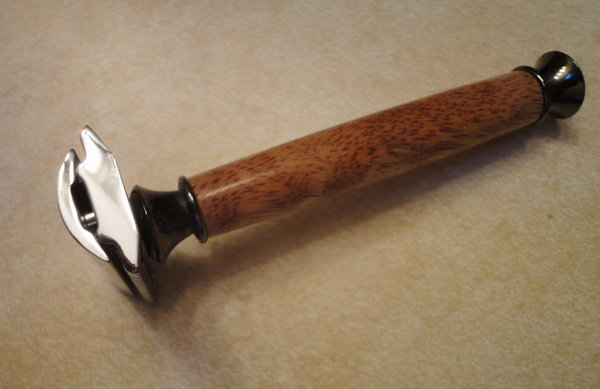 When shaving with this head, there was no blade chatter and the range of acceptable shave angles was greater. The shave was quite comfortable and a little on the mild side. Using a blade ready to be tossed, the shave was very close to the Outlaw using a new blade. Sadly, I now realize that I could have saved $100 in my ES purchase. More sadly, I currently have my Outlaw for sale and nobody wants it.
B

Hi, The Outlaw is not a rebranded Alpha razor. The Outlaw technical and spec drawings were commissioned and paid for by The Executive Shaving Company (ESC).
ESC struggled to find a machine shop in Europe that could deliver on the required price and quality. Steve Tinter of Alpha suggested we send the drawings to the Hong Kong machine shop he uses for his Alpha brushes. This worked out well for us, Steve supervises the manufacturing and in return he gets to sell the same razors under the Alpha brand.
I hope this clears up any confusion.
Brian
The Executive Shaving Company
You must log in or register to reply here.
Share:
Facebook Twitter Reddit Pinterest Tumblr WhatsApp Email Share Link
Menu
Log in
Register
Install the app
Top