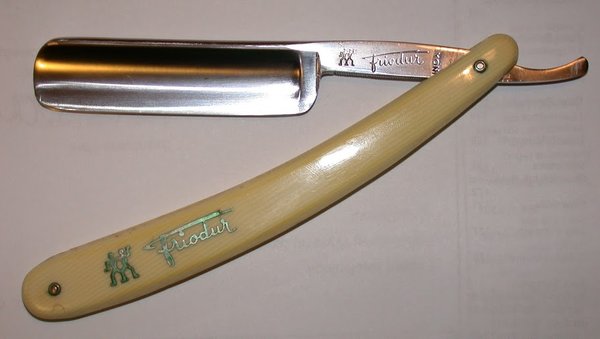 It arrived in the so-so condition with the blade looking like someone was using it to chop copper wires up. Even the rounded point had a buckling. 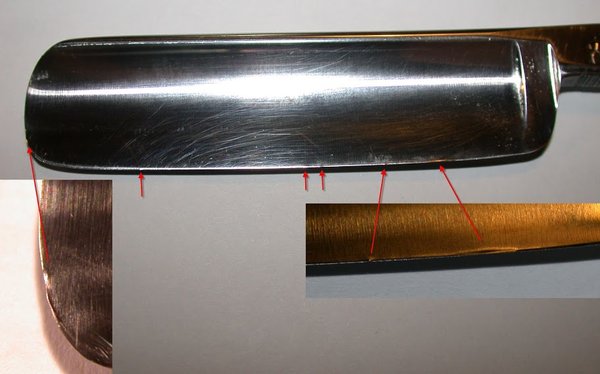 I've taped the spine (to prevent wearing it away) and spent some time on swaying X and rolling X and a combination of both (thanks Bart for the
Please, Log in or Register to view URLs content!
:thumbup: ) with a dense slurry to remove the frowns. I removed all of them except the one on the point. I decided not to touch it for two reasons:
1. The lack of proper tools to grind it nicely.
2. The lack of proper skills to grind it nicely (I'd have to redo the whole front of the point to keep the curve).
Then I removed the tape and followed the regular Unicot. 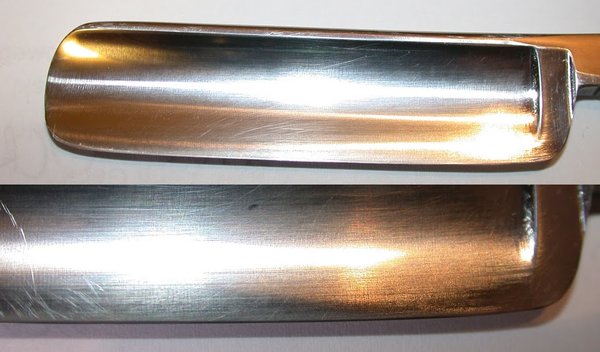 The current result is a shaveable razor which still requires pivot rivet tightening and a general polishing.
But this is a prospect project awaiting the raw materials and the tools to be collected.
Any comments are more than welcome.

I think you did well. Those Friodurs are very nice shavers. It's almost saddening to see what happens to some of these razors, as they lie in a drawer, waiting for years to pass by. Other "obsoleted" items might have been thrown in the drawer and hit the blade of that razor. Some nephew of the original owner may have found it one day, tried to cut some cardboard before he cut his hand and his aunt throws her late husbands razor back in the drawer before she takes the crying boy to the kitchen for a band-aid. Or maybe the uncle bought himself and electric shaving apparatus and used his old razor to slaughter sheep. Who knows. The razor was probably lucky to be stainless anyway, or it would have been long gone.

If I had to deal with these bends, I probably would have taken it to a DMT 325 and 600, before going to a Coticule. These bends can be regarded more or less the same as missing chips. The still is bend past the point where it would normally revert back to the original shape. It's good that stainless is a bit more ductile than the typical hardened high carbon steels on non-stainless razors. The bended chucks would have probably snapped off on such steels.

It looks like you recreated a nice and narrow, sound bevel on that razor. Well done!:thumbup:

I would have use my Kai 400/1000 waterstone to tidy up the edge and rebuild the bevel, then once it was shaving arm hair, dulled on glass and gone on to the coti. as far as the toe goes I would leave well be too, its not bad enough to spoil this beautiful razor.

I long for one of these myself, but lack the budget at this time

: I understand them to be wonderful shavers, so all in all I think you made this one good, a very positive save indeed.
M

Thank you Gents for the opinions. They're very encouraging.
The reason for not using anything but Coticule was quite simple. Believe me or not, I've got no other hone than Coti.

:
Besides, I was able to practice half strokes and X-strokes that way. Plenty of strokes...