I picked this pair of razors up for £5! 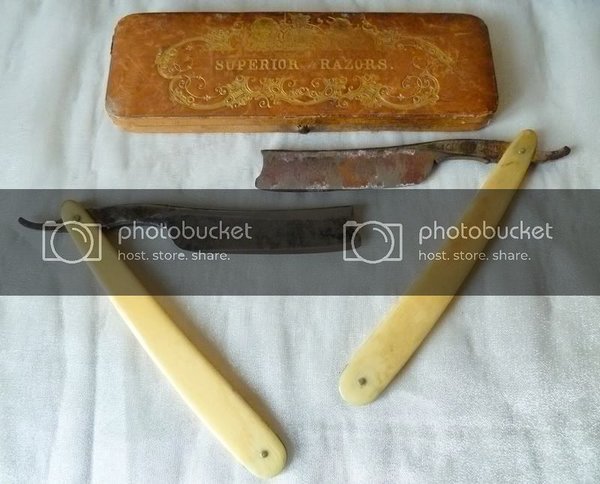 They are heavily covered in rust. I had to sand the tang to find the makers name. TURNER & CO, SUFFOLK WORKS, SHEFFIELD.
The box has been attacked by woodworm. The edges looked more like that of a saw than a razor but apart from that they were fine

I've sanded the worst razor of the two to 600 grit which has removed the orange but hasn't touched the blackening left by the rust. I put it on a Norton 225 and was surprised to find a clean, decent piece of steel under the rust (I thought the edge would be no good after such neglect).

Also I was surprised to find honing a smiling edge easier than I expected.

All that work really paid off! This is one of the best edges I've ever produced. The hairs just fall silently. I was ready to leave these razors for dead! Can't wait to shave with it
M

That is the thing with the wedges the heavy blade does not resonate as the hairs are cut and the shave seams smoother. Quite common for the ivory and bone scales to crack. Many of these are pinned without a washer. Should not be a problem unless the crack continues to travel.

A very nice looking set, wicked find for a fiver. Good to see you're able to put on nice edges as well, since they look like they deserve it. You can count your lucky stars that the rust didn't turn into deep pitting around the edge.

May they serve you well.
M

Out of curiosity, how do you know the scales are ivory?
I have a razor with similar scales (judging from your picture at least), but I tend to believe that mine are bone scales.
K

Thanks for your comments.

It is reassuring to hear that cracks in ivory is a common thing as I do want to keep them.

Thanks Pithor I am counting my lucky stars. I wasn't optimistic I will admit.

I know because an antique dealer told me.

She also said that ivory will always feel cold to the touch.
However I'm hold some bone scales that feel quite cold

Here is a picture with bone on the left and ivory on the right. 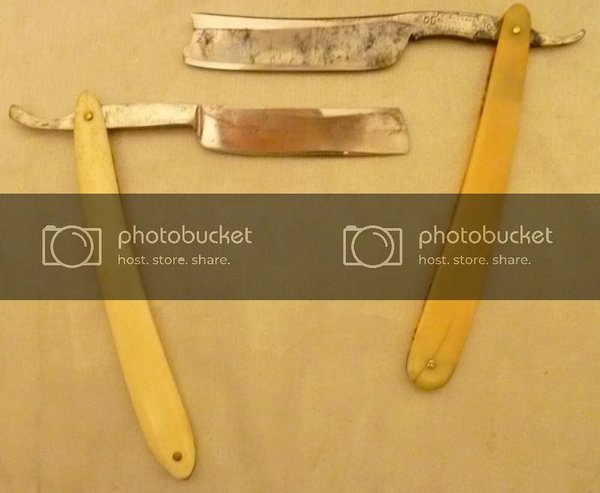 The main differences I notice is that the bone seems to have a more noticeable grain.

Those are my observations. Hope that helps.

That, and ivory develops yellowish streaks and is usually much thinner.
R

excellent finds there, and for a fiver as well.... I have a few razors with ivory scales and they are quite thin compared to other types. I can't seam to get on with fuller razors I don't know why, I prefer the thinner grinds.
You'll have to report back on how they shave.B)
K

It was a great shave this morning

The blade of this razor is really heavy which took a bit of adjusting from what I'm used to but I like it.

I really like the smiling edge.
Really useful around the jaw line and under the chin.

I will look out for razors of this sort in the future.
I found it easy to hone.
I guess I was put off by toe heavy honed razors when I was a beginner and have avoided the smiling spines until now.

I'm really pleased with these two, a real bargain!
I'd like to fully restore them but I'll have a few more shaves with this one first

I, and I guess many others, share your love for smiling blades, you can be much more precise with those.
I wouldn't even consider getting a 3" strop, 2.5 forces you to make X-strokes and thus (I unscientifically guess) allowing the strop to slightly 'cup' the toe of the blade. But that might be my imagination.

About the restoring: go for it if you want to, of course, they're your razors. But if it were up to me, I'd keep the one you've cleaned and honed as it is, I think it looks great and the patina really compliments the blade.
K

You are right the 3" doesn't quite reach the toe of the smiling edge unless you do x strokes but that defies the object of having 3"
When I bought this strop I waited until I was absolutely sure what I wanted.
I didn't like too much draw yet not too slick so the leather was the perfect choice.
I also only liked a perfectly straight edge and spike points. I've cut down some old vintages that were great shavers to get rid of the rounded toe (some people might wince, sorry).
My old strop was really nicked (I learnt with this one) and I thought a 3" would eliminate the risk of this and it has (as well as being confident at stropping now).
I wouldn't have guessed that I would enjoy the occasional fling with a smiling edge but you are right a 2.5" would have been the perfect compromise for both spikes and smilers.

Thanks for the great feedback Pithor. I was thinking this as I've sanded and highly polished another old wedge before and could't help but feel that it had lost some of its appeal to me.

Thanks for your interest, Karl.

Those razors are great collector items, and still quite valuable as they are… congrats.
In my opinion you are indeed correct… those scales are Ivory. Ivory scales are very thin, thinner than most other scale materials. Smooth to the touch and requires very little effort to polish to sheen. No lock-washers, as the rods are carefully peened flat. Mostly found with lead or pewter wedge piece but I have seen some with what looks like wood.

It is a known scientific fact that a curved edge cuts better than a straight edge, it is the scythe effect. A curved blade tends to “slide”… this spreads the load of cutting along more of the cutting edge. However a straight edge will cut just as effectively depending on how it is used… ever wondered why the blade of the guillotine is slanted?

If you think about the reason you do an “X” stroke when sharpening… you may understand why stropping with an “X” stroke may be beneficial. Every razor is different (even if they look exactly alike) so no edge will precisely contact a flat hone. This is why the strop is flexible, but it is not perfect, so an “X” stroke compensates for “inequalities” of the razor.

If a razor after it is restored, loses it appeal to you… or not, will depend on how the razor was restored. I believe existing restoration techniques leave much to be desired. I suggest you keep them as they are and enjoy the shave for what they are worth.

EDIT: If you think about the reason you do an “X” stroke when sharpening… you may understand why stropping diagonally may be beneficial.

The co called “X” stroke when stropping is a sort of misnomer. In my opinion it is tedious to maintain alternate crisscross motion, and there is no advantage to it. Instead it is more convenient to do several strokes diagonally in one direction (/), and then several diagonal strokes the other direction (\). So you still end up with a co-called “X” pattern but not through alternate strokes.
K

Thanks Smythe for some useful comments.

From what you've said I'm pretty sure the wedge is pewter.

That makes perfect sense about a curved blade, it's obvious now you've explained it.

I see what you are saying about the X stroke diagonally.
I would say that generally it is more relavent to honing, because of the flexability of the strop just having the edge trailing is enough to reach any inequalities of the edge of most razors. However for this razor you are right, diagonal strokes are needed.

As for the restoration I'm no expert. I've sanded and polished some razors, done some re-pinning.
I'm getting some materials together to make some scales.
I'm sure a man of your experience could restore these razors in a such a way to do them justice but I will leave them until I'm more confident.
If I decide to restore these or the crack in the scales become a problem perhaps you could give me some advise?