SU-Patron
The Haircut & Shave Company N075 razor is relative new on the market. In 2019 the razor entered the market. The Haircut & Shave Company already produced shaving brushes and shaving creams. The N075 is the first razor of this company. When I saw pictures of the razor I immediately was interested in it. The black aluminium base plate gives the razor an in my opinion unique look. Then I came in the happy position to take a second hand razor over from a fellow wetshaver.

The weight of the razor is 130 grams, which is heavy for a razor. Personally I am a fan of high weighted razors. The handle of the razor is thick and puts a lot of people away who don’t like that. However, for me it turned out to be a handle with great grip. The knurling on the handle is very sophisticated and holds very nicely in the hand.

The blade gap is 0,75 mm. That is not very much, however the razor is created to give a smooth but efficient shave. In my opinion the makers were successful in that mission. For me it is the most comfortable razor in my den. You even don’t feel the blade do it’s job. After the first shave I thought it would be impossible to cut yourself with this razor. The mildness of the razor caused me to commit a mistake that a lot of beginners commit: putting (light) pressure on the razor. So I had to deal with some irritation issue’s. However, when properly used this razor is very smooth.

Despite the mildness, the razor is still very efficient. A BBS result in three passed can without problems be accomplished. Currently I am still in the phase of testing blades in the razor. The Gillette Silver Blue and the Treet Platinum are now the blades I liked the most in this razor.

After I bought my Timeless I discovered there are razors which are more efficient. However, for a daily shave the H&S N075 is efficient enough. What I do like about this razor is the combination of smoothness and efficiency and also the unique look of the combination of stainless steel and black aluminium.

Due to feedback of the users the Haircut & Shave Company decided to develop a base plate which is also of stainless steel. Also the handle which is too thick for much people, will be redesigned. 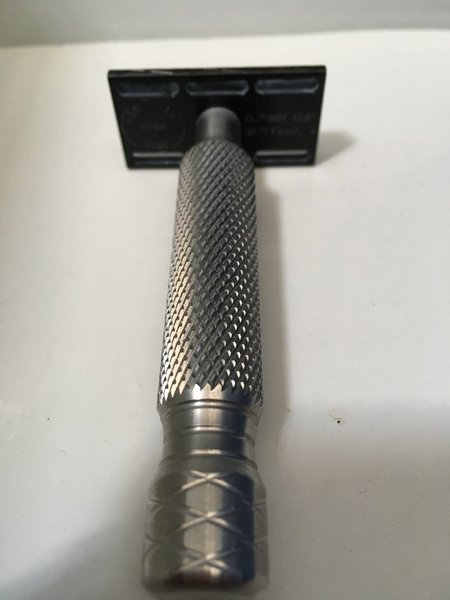 Great shaver indeed but had to let it go, handle and alum baseplate where not to my liking, was planning on getting the stainless steel version but now I'm not really sure anymore, so many other razors coming out.
Practice for a Long Long Time and All Is Coming

I heard very good things about this razor and anxiously waiting for the stainless steel base plate version. However, this comes at a time when there are many other razors soon to arrive and so I am not sure if this will be the one I get.

SU-Patron
H&S released their new version of the H&S N075. It is made of Stainless Steel. In my opinion it is a very nice razor to see.

The price also increased: from 190 USD to 220 USD. Because I did’nt have any problems with the first version, I won’t buy the new version.

Where the old grip looks, let's say, a bit crude, this one is very graceful.
U

All ready sold out!!!

Both of them already sold out? What a shame!

Wow! That truly was a limited edition. Now I guess I just have to pre order the Paradigm Diamondback.
U

I shame had to pass this one but the Janus Razor will make everything fine again and it’s also very rare.

I followed the Janus project, the updates in the mail for the last few months, and I think it's a wonderful razor.
The price hold me back........ Hope you like the quality and the shaves with the Janus as much as it looks @UnShaven !
U

For me the price was also a steep mountain to take and my brain said don’t buy but a have a very naughty finger and this didn’t obey my brain. When my brain was a little off my finger hit strangely enough the buy button. And before my brain could respond I was the owner of a Janus Razor.
Shit happens.

I have the same impairment. When it comes time to pay next month's bills PM me and I will give you recipes for soups and stews in a volume big enough to last a week each. I will even include recipes for making bread.

So at the end of your salary there is still some month left?
There are plenty of weeds that are edible so if you want you could probably safe some money on those soups and stews and wring out another razor or so.
Practice for a Long Long Time and All Is Coming

Come on guys just forbid the lady of the house for one month to buy shoes and new clothes, that must satisfy.

Who is the boss in the house?

Keep them naked, barefoot and shave them bald I say, why do you think I never complain about the wife objecting me buying shaving stuff?

Practice for a Long Long Time and All Is Coming
H

The H&S as a very mild yet effective razor. I need a three pass sleeve to get rid of all the stubble. The handle is slippery and gives it a wrong balance. I had to put another handle on it and now it's more balanced and more efficient.
You must log in or register to reply here.
Share:
Facebook Twitter Reddit Pinterest Tumblr WhatsApp Email Share Link
Menu
Log in
Register
Install the app
Top