I'm a Canadian expatriate living in Taiwan. I've been shaving with a straight razor for about a year now. I have a new edition Boker Edelweiss and Tree Brand. I'm extremely limited in what shaving products I can buy here. It's either the very basic or else the ridiculously overpriced.

My Coticule is a 50x150 La Veinette that I picked up from Jarrod at The Superior Shave. 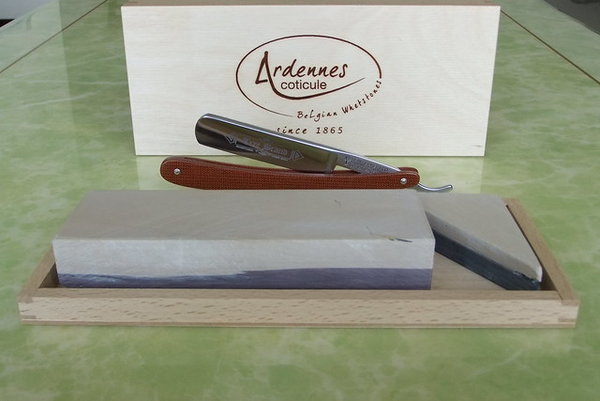 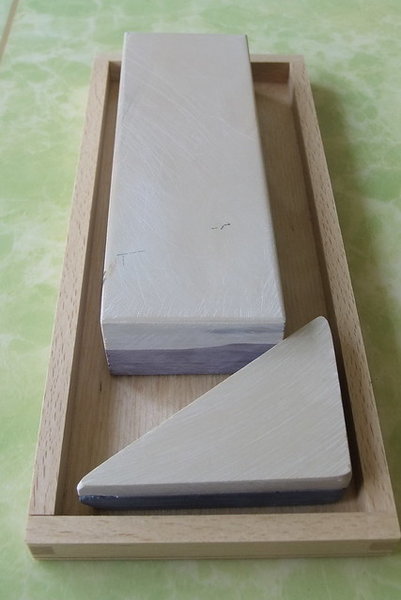 Other than straight razors, coffee and reading are my other hobbies. I roast my own coffee on a Quest M3 roaster. I use a La Pavoni PRH for espresso and either an AeroPress or French press for brewed coffee, depending on the weather and my mood. Keeping with the manual theme of my shaving, I usually grind my coffee using hand grinders.

I'm a big fan of John le Carré, Graham Greene, Alan Furst, and Martin Cruz Smith. When the mood strikes me, I also delve into Philip Roth and Gabriel García Márquez, among a few others.

I'm here hoping to learn how to "read" my Coticule and how to use it to the best of my ability.

Nice to see you here my friend

Welcome to Coticule.be. That's a very nice Coticule you got. You'll learn to read it soon enough. :thumbup:

You welcome my friend.Enjoy your coticule,however La veinette is an easy layer.Concerning esspresso i use a La Cimbali.
Cheers from Athens
Best regards
Emmanuel

Thanks, everyone. I see some familiar avatars. It even looks like there are some coffee folks on here, too.

Did I ever mention I am a Coffee fan too? Gaggia on the counter top, Bialetti on the stove top, and French press by the sink :thumbup: I do not roast but I grind

Ey up, smallish world aint it :thumbup:
By the looks of it with more folks discovering the wonderful attributes of Cotis, them mines aint going to last very long

Sshh dont tell everyone! they will all want to join in Bwhahahaha

Yep there is quite a crossover.

You're lucky living in the UK because you have access to some fairly high quality, freshly roasted beans from some famous roasters.

I'm noticing a number of Shave Ready members on here. It looks like Ralfy is rather subversive.

Do you mean crossover between shaving-related discussion forums or between coffee and shaving?

Well both I guess

: but mostly that many of us are on several forums together!

Welcome to the site and if you ever need help just ask..well, ANYONE! :thumbup:

I went down to Kaohsiung, in the south of the island, and met up with Tom (aka jendeindustries). He was able to show me first-hand what honing looks like. Not only that, but he gave my stone a good lapping, which it definitely needed. Then Gary gave me a kick in the pants last week, so I decided to give honing another shot. I watched Gary's videos again (guys, we really need more videos!) and went to it.

The most useful techniques I learned from Tom and Gary were to hold the hone in my hand (previously I'd been setting it on the table) and to go fairly lightly (previously I'd been applying too much pressure). I don't really know what I did. I did some half-strokes on slurry; I washed off the slurry, raised another slurry, did some half-strokes and dilutions; I washed off the slurry again and did about 200 x-strokes on water. I stropped it and, lo and behold, it passed the hanging-hair test. Not just passed it, but passed it with flying colors! B) I stropped it a bunch more, and then shaved with it last night. I now know first-hand that passing the hanging-hair test is not the end-all, be-all of honing. The razor didn't seem that sharp, and it definitely wasn't smooth.

: Nevertheless, I count it as a minor success. Today my face is still a bit itchy and slightly raw, but not too bad. Despite not seeming that sharp, it was kind of average for sharpness. I know I need to do more sharpening on the tip and heel, as the places on my face that I rely on both of those heavily for were either especially raw or else had an above-average amount of whiskers poking through.

So, my next task will be to sharpen up the tip and heel and try to make the whole edge mellower.

Hi Slow Rain. You don't really need to produce a new slurry during dilucot process. You have to start and finish by the initial slurry adding water from time to time. The slurry will became grey and thinner runing the method.Once you reach the clear water you have to continue half strokes until the edge seems homogeneous.After 50 x strokes on water you have to test the HHT. If surpasses hht2 go to strop.If not ,try on water by half strokes and x strokes. Take your time .More half strokes on water it isn't metal wastage.
Good luck.
Best regards
Emmanuel

Thanks, Emmanuel. I had to generate a new slurry as most of it was on the sides of the hone and in my hand.

I did some more honing last night and shaved this morning. Relatively speaking, the edge was sharper and smoother, but it still wasn't anywhere near mellow. I did mostly x-strokes, which I don't really know why. I'll try honing again tomorrow night, but I'll focus mainly on half-strokes. The toe has very little sharpness, hardly passing the hanging-hair test, if at all. :-/ I'll pay extra attention to it this time round.
C

As a novice on natural stones, can I ask if there is a problem focussing on x-strokes? Personally I feel more at home with x-strokes than half strokes and don't (yet) have the skill to execute half stokes with any finesse. I practised honing a favourite razor last night on and for the first time got a comfortable shave off my bout (success!) however it was achived on x-strokes.

My friend ,X strokes is suitable too, personally i could hone a razor using x strokes only running a full dilucot ,but it takes much more time.For a new coticule honer is hard to be sure that the blade touches evenly the hone surface applying x strokes.By half strokes using your index, is much easier to apply the correct pressure and the tangential action.
Best regards
Emmanuel
You must log in or register to reply here.
Share:
Facebook Twitter Reddit Pinterest Tumblr WhatsApp Email Share Link
Menu
Log in
Register
Install the app
Top