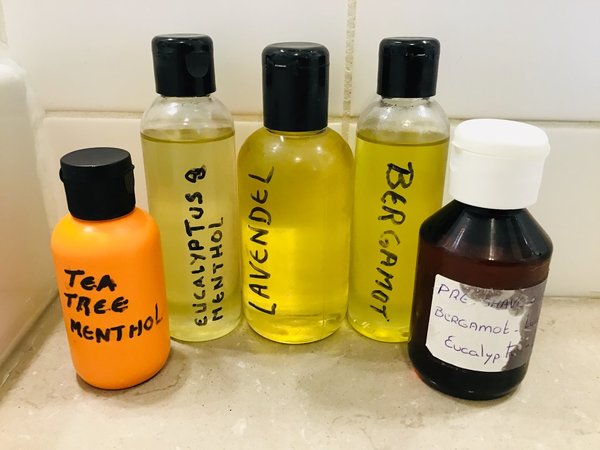 I am charmed by the use of pre-shave products and then of both the cream and the oils. I always shave before showering and my routine is as follows: first wash the face with a glycerine soap, rinse with water and then apply the pre-shave.
Then I take my time to whip up the shaving soap in a bowl, then apply the lather to the face and let it work in for a minute before I start shaving.

The use of pre-shave is part of the shaving ritual for me and not so much because of the extra effect it would have on softening the beard hair.
I am convinced that a good shaving soap or cream will also completely soften the beard hairs while at the same time optimally protecting and caring for the skin during shaving.

I can imagine (purely as a layman) that people with dry and / or sensitive skin can benefit from a pre-shave oil with its nourishing effect and the extra oil film that is left on the skin. This could have the effect that the razor blade probably glides over the skin with a little less friction.

The only pre-shaves that have a clear added value for me are for example the mentholed Vitos and Proraso green. The cooling effect of a later applied menthol soap is enhanced by this.

But as I said, I find the use of a pre-shave a very pleasant part of the shave, but the prices are generally quite high, see for example the TOBS, which costs 18 € for 30 ml of oil.

I have studied the list of ingredients of the different manufacturers beforehand and it turns out that castor oil, jojoba, grape seed, almond and olive oil are the most common ingredients.

In various forums and on the internet you will also find many different recipes to make your own pre-shave oil and it is absolutely no higher mathematics to put together a good pre-shave yourself with this information.

Now the nature store "The Gardens" had a high discount offer on all their oils, so I took the step and bought several oils.

To give the oil a nice fragrance, I also bought some essential oils like Eucalyptus, Lavender, Bergamot, Pine and Tea Tree at the same time.
For people with sensitive skin, it is more advisable than essential oils to choose perfume oil that gives less allergic reactions.

A tip with fragrance oils: be careful when adding essential oils to the pre-shave oil. I was able to throw away my first bottle because I had added too many Lavender drops. So the creed is to start gently and add a few drops each time until you get the scent strength you want.

For the first and second bottle of Pre-Shave oil with respectively the Lavender and Eucalyptus / Menthol fragrance, the composition is as follows:

In the Eucalyptus version I then added mentholk crystals to achieve a cooling effect. Menthol crystals dissolve very well in oil.
The cold feeling of this Eucalyptus / Menthol oil is stronger than that of Proraso green.

The third bottle of homemade Bergamot Pre-Shave oil has a slightly different recipe than the first two:

The fourth bottle contains Tea Tree oil and Menthol crystals. This also has a different recipe and that is:

The 5th bottle is a combination of pine, bergamot, lavender and eucalyptus oil. This is also the first time I've added olive oil and argan oil.

In my opinion, the viscosity of the oils is comparable to that of a TOBS, Floid and Bleubeards Revenge.
And of course it is very important that the foam has absolutely no adverse effect on the oil layer.
However, the shaving brushes can of course become "greasy" so an occasional cleaning with a mild shampoo is recommended.

For me, the eucalyptus / menthol and the Bergamot / Lavender / pine / Eucalyptus versions are the most successful in terms of smell.

In terms of composition and shaving comfort I find the Bergamot / Lavender / Pine / Eucalyptus or the 5th bottle with olive oil and argan oil the most successful.

Thanks for the information!
Practice for a Long Long Time and All Is Coming

Thank you for the good information. I recently participated in a pre shave oil challenge and made my own to participate. Because I make shaving soap, I used the oils that I had available which came out roughly to:

It worked out well and the shaves were good, however it did add an extra step to my process so I stopped when the challenge ended. I use the left over on my scalp and hair a couple of times a week as I swim daily and my hair takes a beating.

SU-Patron Gold
I was in Germany last week and ran into the Balea Man shaving oil in the DM.
A product that does its job very well and costs only € 2,95 for 75 ml.