How does your Edge Measure Up - Straight, Smile, Wavy or Frown

We often note the condition of the edge (before honing)… that is: pitting, chips, cracks warps, “dullness” and other such nuisance that would make sharpening or shaving difficult. However we seldom consider the profile of the edge… that is, the average “line” formed by the edge from heel to point. I believe the line or “shape” of the edge has great effect on the performance of the resulting edge. Unfortunately, the true shape of the edge when looking at the blade face-side, is not always obvious at first glance, a slight frown, almost invisible, will often result with a “lacking comfort” even after the best honing effort.

For example: (other things considered) with a frown most of the middle of the edge does not make good contact with the surface of the hone, this is because the middle is held-up off the surface by the hi spots (in this case the Heel and Point)… it’s almost like the “trough” side of a warped blade… the middle fails to make good contact the surface during the stroke, however, unlike a warped blade, nether side of a frown makes proper contact with the hone and the resulting edge just won’t “cut it”.

Note: a warped blade is not such a bad thing; with the proper technique can easily be honed, but it does help if you know it exists, however the physics, and thus technique of sharpening a blade in either condition is a little different… In other words, one condition you need to fix before successful sharpening, the other you cannot fix but you can still sharpen it successfully.
Note: A warp can indeed cause a frown to form at the edge (things do get complicated), but so long as you are aware of the condition your chance of success increase 10 fold.

As mentioned earlier the high spots are in firm contact with the surface of the hone, but the low spots are set back from the average line of the edge, nearer to the spine and thus is held up off the hone, not by much, only a few microns may be enough to prevent contact.

This text is getting long winded so without further delay lets move on to some examples in photos of a typical selection of “Not Yet Restored or Sharpened” auction acquisitions, let’s examine them one at a time.

It’s nothing special, just your typical straight edged square point 5/8th (11/16th) straight razor, but for those interested it’s a Top Flight manufactured by Burrell Cutlery Co, Ellicottville N. Y., this one just happen to have blued (black oxide) tang and white plastic scales Black wedge… (Incidentally I was surprised to discover the scale material is in fact PVC… Very unusual for a vintage razor… but we will discuss that in another thread). 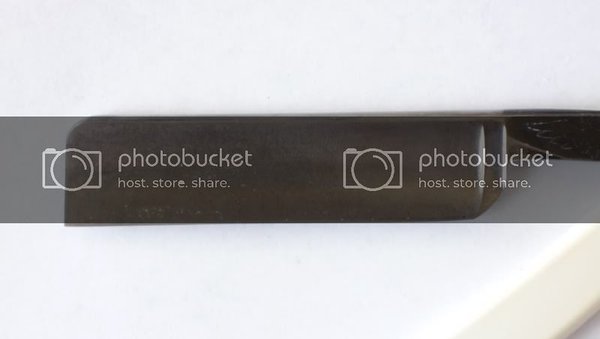 Looking face-side it may not be apparent that the blade has a slight frown, of course to be sure we could place the blade against a flat surface such as the surface hone.
However if a straight edge is not available (for example you are in an Antique shop), or the blade is “shave ready” (obviously you don’t want to stand a good edge against the hone now do you?) here is a quick way to check;

Open the razor to the 270 degree (as if you are about to shave with it) then flip it upside down and look in a straight line down the edge from heel to point, and most any “profile” imperfection will be immediately obvious. 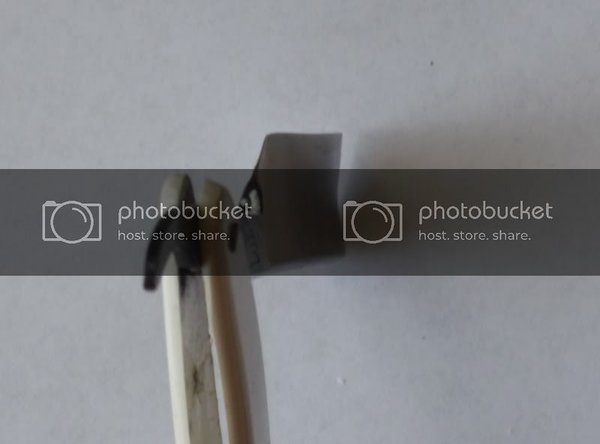 Now of you are not too concerned with the sharpness of the edge you may stand the blade upon its edge on the hone and if there is some imperfection, then light can be easily seen in the middle of the blade… in this case a frown.

Here is a typical 6/8th Round Point manufactured by J. Wiss & Sons Co. Newark N. J., USA. “Wiss Sure Comfort”. The edge looks to have a nice comfortable smile… 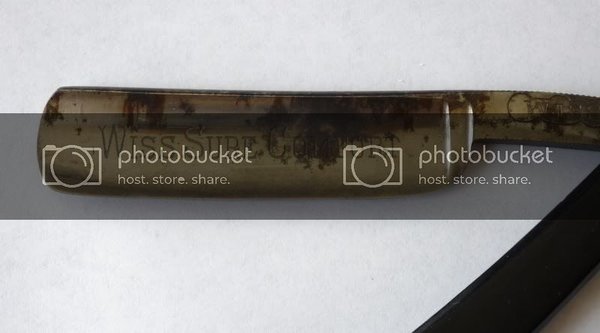 With the exception of a few tiny rust spots lololol, looks ready for the hones and a good shave, however, flip the blade and look down the edge and we see a wavy edge that appears to have two frowns. 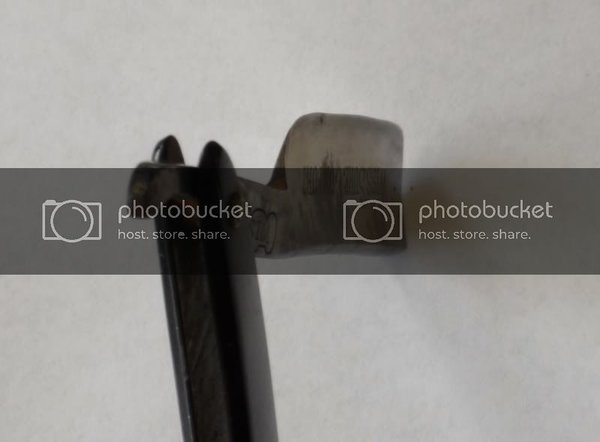 And for your entertainment, here in this animation the WISS blade is standing on the surface of the hone and you clearly see the two frowns as I roll it along the edge from heel to point.

For those of you who believe “branding can do no wrong” here is a “Bengal” 6/8th round point manufactured by T. R. Cadman, with what appears to be a straight edge with an oh-so slight smile…

…however she is flipped and exposed to our glaring eyen in the next two photos.
Here she is with a wavy edge 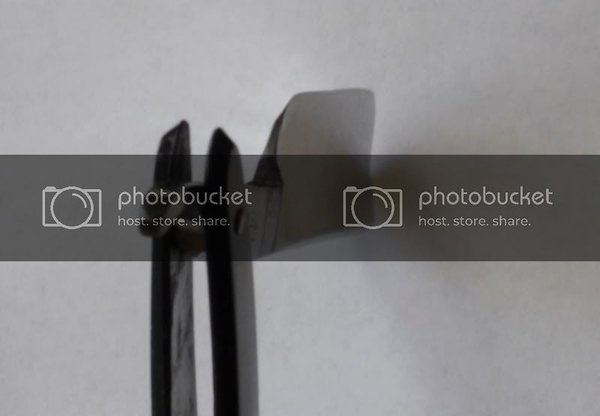 And here we confirm a frown right between two deceptive smiles.

This is a Duke-Peterson Hardware Co 5/8th square point.. so this one is obvious face-side, she has up-turned point and what appears to be a straight edge ¾ of the rest of the edge and terminating at a smiling heel.

But like the others she won’t escape our prying eyes as she is turned up side down in this photo, and then laid flat on the hone for confirmation in the next photo. 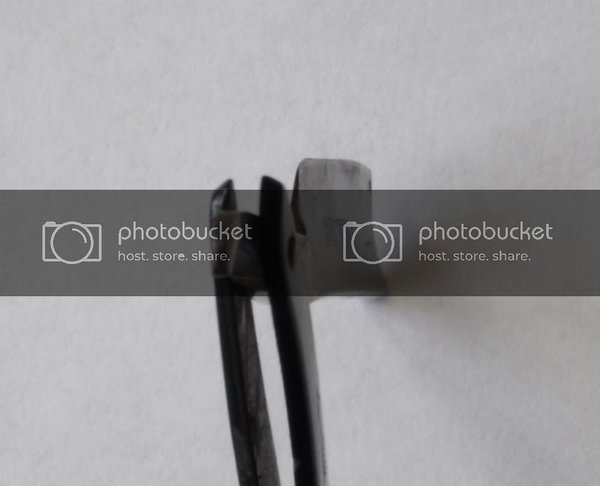 No straight edge… but a frown, and you can see the up-turned point is exaggerated against the flat surface. 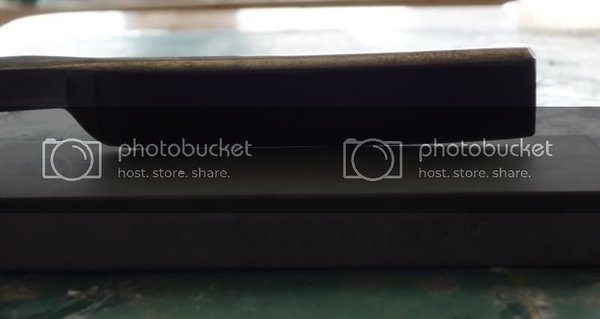 There are many more examples of “inconsistent” edge but the point if this thread is to get you to understand that if your edge is not consistently “*straight*?” you may not get the optimum performance after the best honing effort.
Note: It’s not a typo… I put the word in quotes, stars and a question mark because “straight” in this context deserves explanation:

First I am certainly NOT referring to a perfectly flat-line edge from heel to point (non-smiling)… Open Razor edges come in variations from perfectly straight to the wildly smiling. What’s important when it comes to restoring/sharpening is the question: “should it be straight or smiling?" Straight is obvious… it’s either straight or not... however, if smiling, then how much of a smile should she have?

Your best guide?… knowing how it was when fresh from factory… however, as you may have guessed by now, most of those factories no longer exist, so it’s impossible to know for sure what your vintage has been through… how many honing sessions from inexperienced hands… abuse from an unsatisfied owner… rust from neglect… an attempted restore… the list goes on… when material has been removed there is absolutely no way to tell what it was originally (unless you somehow have access to Doctor Who’s Tardis). So now this knowledge can only be gained from experience, or observing a similar model in near original condition or… discreet questions to those who may know.

So how do we fix these issues… we will examine one way in our next series of posts so stick around.
Have a good one.

This looks like the beginning of a very interesting story! :thumbup:
Can't wait to read the sequel ...

Certainly a thread to remove our frowns when it comes to those tricky vintage edges :w00t:
Good work Sir Smythe
I eagerly await the next instalment....

Your eruditeness is an example to us all.

I can hardly wait till you publish the next part of this excellent series.

Stunning use of the language Sir Bart
Simply Splendidus!!

Looking at the blade open 270 is pure genius! Thanks for sharing that excellent tip. :thumbup:

Thanks guys... you know, I really need to finish Part 2 of this article.

And dont forget to send that nice Mr Horsepool the Bengal, the one he has is lonely :-/
Hahahaha