As we are away from home, and I bought 2 razors with me, 1 vintage J Sellers wedge, and my 6/8 Dovo best, I also bought along my coti and slurry stone, strop, microscope and water bowl, my intention was to practice on the coti with the Dovo, and shave with the Sellers.. ace!

What made me think was the fact I hadnt bought any tape along, the idea being to Dilocut the Dovo, hence no tape needed :thumbup:

But what if I wanted to even touch up the Sellers? I used 2 layers on the hone when I first did it, and without tape I couldnt do a quick touch up on the stone could I.

So my question is this: when razors where made back in the day, they where at 1 time almost exclusively ground as a wedge or near wedge, now the factories that made these had the right tools and skilled craftsmen to produce some damn fine shavers IMHO, but how the f@@K did My great grandad Horsepool touch up or hone such Razors, there was no tape back in the mid 1800's was there?

What could they have used chaps?? was it all done freehand?? which makes my honing skills look like those of a trained monkey...lol

Slack pasted strops. And a lot of swearing.
Full hollow ground razors didn't conquer the world for nothing.

That's what I think.

That's interesting, Ralfy. I've always assumed that they were done free-hand or with some sort of a jig that slid over the spine. It makes sense to me that this explains why many of those vintage wedgy razors have such a bad wear pattern...

A different thing that I was thinking of. Maybe it should be a new thread, maybe not, I don't want to mess too much.

With time, as coticule's surface wears out, so does the chamfer on the edges, right?. I realize this happens in the pretty long run, but will happen sooner or later, so you should keep an eye from time to time on them, am I correct?

I`m not sure they did notice the change in sharpness? It would happend over time and that makes it difficult to feel. Also..they most likely had nothing to compare it with... And no other hone.

Surely good quality razors were expencive (also) at that time and they most likely had no more than one..and that should last a lifetime.

This was not a hobby but a nessecary need for shaving.

So if a shave hurt...well tough luck! (same goes for me)

When it ever becomes time to reflatten the Coticule, tuning the chamfered edges can't be too difficult. I don't find it all too important. I've honed on plenty Coticules without much chamfer. Just a few quick rubs with the side of a slurry stone to "break" the hard edges, and you're good for many razors.

Ok i gotta disagree it is my belief that of course they could tell the difference, I can! that is where Sir Bart's pasted strop theory comes into play, also and slightly off (my own..lol) topic, if you were posh you had either a butler or some other kind of "Gentleman's Gentleman" that would shave you and maintain your razors, a bit less posh and you had your Barber do it, down a little further on the class ladder you shaved yourself, not usually everyday, and if you were poor and unwashed you had a beard! haha

I am still finding it hard to believe they only had pastes to rely on, after the factory edge was set. I am hoping that the everwise good Sir Smythe joins this with his ever illuminating information.

Sure you can feel the difference Ralfy. You focus on it and you spend a lot of time improving your edge..You have a bunch of guys ready to answer your razor/honing questions (Sir Bart namely)
BUT in the old days..for the common man..it was a daily need and not much fun.

It really wasnt a matter of spending time and having a pleasurable time with razors..but it was the only choise.

Lets suppose all you had acess to was the " 5 for two pounds" razors...and so did everyone else you were related to? Just how would you determine sharpness then?

Offcourse this doesnt apply for the aristocrasy..SO they must have had other means...

Excellent Torben, I hadnt even thought of it like that, for sure we live luxury filled lives compared to our forebears, I dont know my shaving history well enough to piece the past together as shaving evolved, but coticules have been around like since forever ago, pasted strops go back to the Ark..lol so the "home shaver" must somewhere down the line had access to some form of sharpening/maintenance device?

My great grandad Joe warder used as my Mother recalls a strop of sorts that he kept on the back of his bathroom door, that must have been at least 100 yrs ago, and I know Sir Bart has gentlemen that bring him razors maintained on paste alone, if I recall they can get a yr or so out of a blade before it is rendered "Un-shave-able" now I know 100 or 200 yrs ago my lot were a tough bunch but I cant see them shaving with a razor that had been slowly turned into some sort of torture device? and I cant see them buying another "10 Bob" yearly disposable every christmas, for one we would all be knee deep in them surely?

Very very interesting stuff, I love my history when it comes to stuff like this :thumbup:

For all I know, traditionally they honed (often on a Coticule, that was for ages THE razor hone) till the blade maxed out on slurry. I can't imagine that no one figured out that thinning the slurry could get you further up the keenness ladder. In Belgium, traditionally they would finish on a pasted strop. (I don't know about other countries, but I figure it wouldn't have been that different) It's not too difficult to get a great shave that way. And you can just maintain the edge for a long time on the pasted strop. Quite frankly, that is exactly what most "honemeisters" do today.
I can imagine, that here and there, a guy with a "Les Latneuses" or a Coticule with similar speed on water, just kept going till he had no need for pastes. I also believe that the majority of men struggled with the sharpness of their razors. From what I understand, most men relied on a barber to get a shave. Daily, weekly, monthly, or only with Easter and Christmas, depending on funds.

Just wanted to suggest that you hold on to that Sellers. A guy whom Bart and I know thinks they're the best. Bart kindly honed mine, and while I actually prefer bigger blades, it really is one of the best razors I've ever used. Probably one of the most underrated brands out there. ::love:

Why thank you Robin, you did mention something about it before, it is a very very smooth shaver and not too small at 6/8 its a keeper for sure :thumbup: 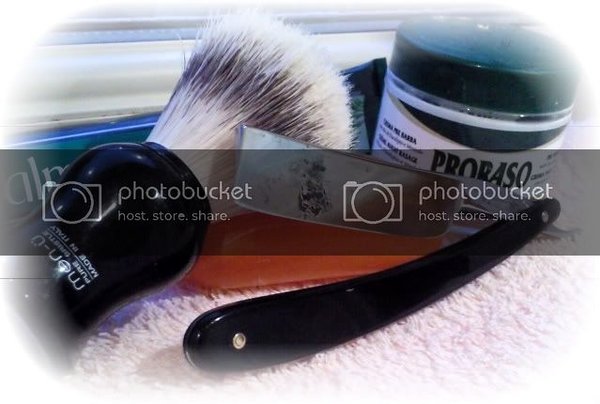 You are correct Ralfy, back in the old days tape didn’t exist…

But this all has to do with bevels.
Early razors were wages or near wedges (flat ground or hollow ground). When fresh from factory the bevels were thin, but they grew quickly, and it was frustrating for the end user to maintain, only barbers had the patience to sharpen one… after all, keeping the razors comfortably sharp was as much a part of a barbers business as maintaining the tools of the trade.
However, it was common practice to have a razor re-ground when the bevels became too wide and the razor took too long to sharpen. Back then, there were many cutlers who made a good living sharpening or regrinding all types of cutlery including razors… at that time good stones were expensive and not commonly found in the home of the average man (this is before the advent of cheap artificial hones and the only available natural stones were relatively expensive). They would put the razor on a slow spinning grinding wheel (not unlike Barts Tomek) and grind away the steel near the edge on both sides to make it thin enough so that when the edge is pressed flat on the thumbnail and slightly tilted the steel will bend (how much it “should” bend comes with experience… too much, the edge becomes too week to shave comfortably… too little, the grinder is not finished).

The powder would always be mixed with some kind of fat (tallow or lard) and rubbed into the strop. In one process the fat was dissolved in turpentine, then the abrasive powder mixed in, then the strop was rolled up and placed into a glass jar and enough of the mixture poured into to completely submerge the strop, and then the jar covered. The strop was left in this mixture for a few days so the abrasive would be deeply embedded in the fibers of the leather. Finally it was removed, unrolled, hung up and allowed to completely dry, at that point the “Razor Strop” was ready for use… able to put a “sinfully sharp edge on ANY razor” (so the text read)… and as we all know from our experience with CrO2, I have no doubt these pasted strops must have worked back then and were very popular... but many were not marketed as “pasted strops” and the common man probably didn’t care, so long as this “magic” strop got his razor sharp… However there would come a time that the bevels became so rounded that even the Magic Stop couldn’t get it sharp any more. And he would have to get it re-ground at the nearest cutler.

I hope you'll sleep little and write much, my friend.
Tell us more, tell us more, uncle Smythe... pleaaaase...

I just knew our Cedric would come through, wonderful Sir Smythe and I hope you find the time to add a little more, what sort of dates are we looking at here my ever knowing friend?

(Do You Think Sir Bart will Notice???) 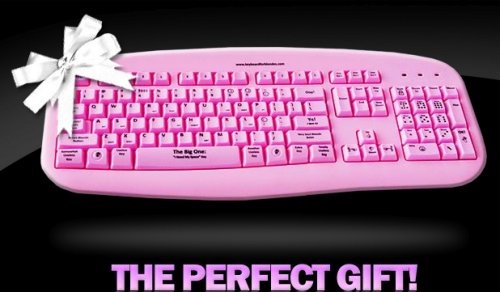 You know what your problem is ralpy? READ THE TITLE OF YOUR THREAD!

I wanted to say something the second I read that. I'm glad you beat me to the punch