Over the excitement of receiving my new strop, I'd planned to write a full blown review, but now I want to keep this short and to the point. I could write a whole bunch about the amazing craftsmanship, or the simplistic, elegant Japanese style, and all that jazz. Suffice it to say, this thing is a masterpiece. I can't even imagine the work that went into this strop. I think pictures will say this better than some words. 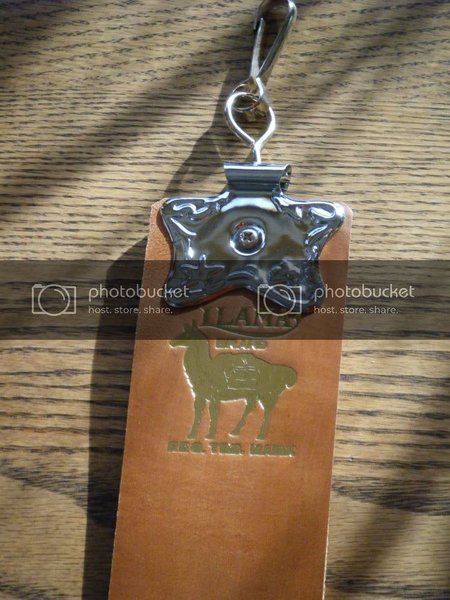 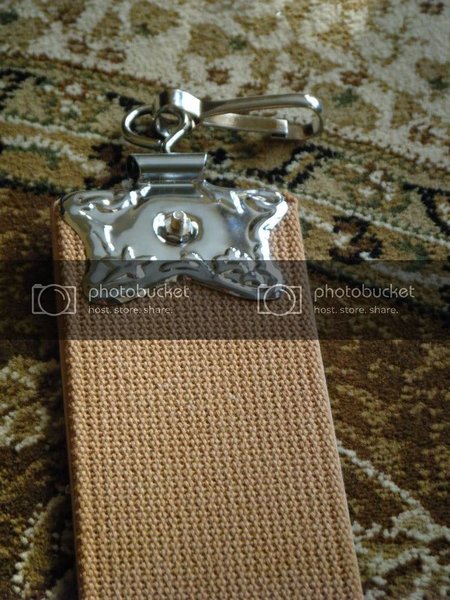 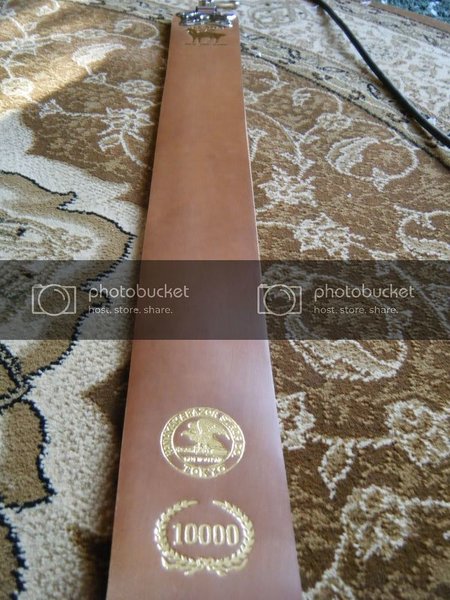 From the images you can see the simple, utilitarian design. It isn't more than it needs to be yet it's very beautiful at the same time.

I want to tell you about some of the important aspects like feel, and functionality. The leather is very, very supple. When I got my first strop it wasn't what I thought it would be. It was hard, and stiff, among other things. The Kanamaya is what I expected a strop to be, in every aspect. It is really soft, and supple. I don't have any fear as far as cupping or warping goes because the leather pretty much bends to the strop. You could also attribute this to the thinness of the 10000.

This is where the cut-off end comes into play. Personally I prefer the cut-off end. Now, I have never used a d-ring or leather trimmed handle, but I don't think I would like it. The simple cut end connects you to the strop, and allows you to feel the luxurious softness of the stropping surface. I wouldn't have it any other way with this strop, the leather is too damn nice not to touch. 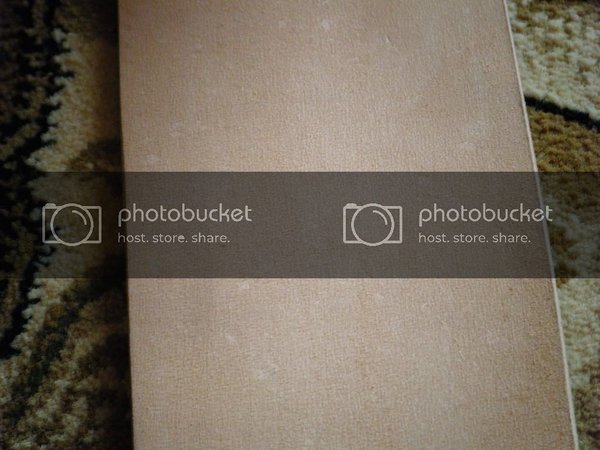 A view of the back of the leather to give you an idea of how much work must have went into getting the stropping surface ready.

I think draw is a very important factor to considered when buying a new strop. It seems like everybody says horsehide is really slick, and has no draw whatsoever. I was kind of worried about these remarks, but they couldn't be further from the truth (as far as the Kanayama goes). They are probably so used to the super heavy draw of the latigos that they don't have any feeling left for the subtleties. I personally don't like really heavy draw (like on my cowhide Filly). It's like somebody is pushing the razor in the opposite direction and I have to overcome that force. It's as if I'm fighting against the strop to get the job done. It's just not very light like it should be, we're dealing with a delicate strip of steel here, and it feels like the edge is being sucked into the leather the faster I strop. I personally just don't like the feel, and I don't think it's the best for the edge. Stropping on the Kanyama is orgasmic, it has what I imagine to be perfect draw. It doesn't feel like I'm fighting against the strop, yet it feels like I'm getting some work done on that delicate edge. It's made me into even more of a stropping addict.

Now for the linen. I wrote a bit about it back in the "smoothness" thread that Gary started up, so you can check that out there. I'll add it into this review later to keep everything together. Suffice it to say, it has broken in considerably since I first got it. I notice this in both look and feel. The feel is really starting to develop. I'm no longer cringing every time I put my razor to it, it's softer (less harsh) than before. The feel is actually quite pleasant. Maybe it's just because I've gotten used to it, but I really like it. It still has that signature zing, and scrape to it like it did in the beginning, and I also really like that. As for it's effectiveness, I wrote about it in that "smoothness" thread, and I think it's getting better as it breaks in. I'll try to post some updates as far as edge longevity is concerned, it's too early to say anything now.

Hmmmm, is that everything I wanted to say? Actually I'd like to say a bit about the particular model I chose. I bought the 10 000. Even though it's the bottom of the totem pole, the only real difference is thickness. It's the thinnest of them all, and I must say it's quite thin. Regardless, if well taken care of I don't see why it wouldn't last many many years, if not a life time. I don't have decades of experience with these thing so it's hard for me to say how long it might last. I think the suppleness will help in regards to warping, cupping, stretching, etc.. I don't regret getting the 10 000 at all (I'm not one to regret anything ), but I think that the 30 000 or higher would have been a better choice for the added thickness. I'm eventually going to go for one of the high-end ones like the 70 000. That thing if super thick! 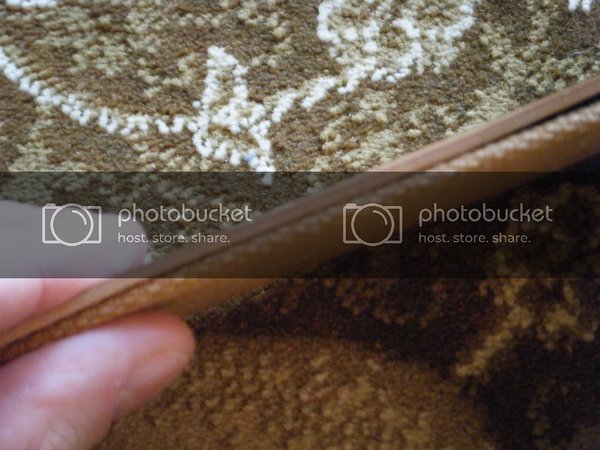 All in all I am very pleased with this strop. To me it's worth every penny. I would buy it again in a heartbeat, and not even consider anything else.

Here are the posts from the "smoothness" thread.

Sweet review here! Ive been eyeing up these strops for aaaaaaages as apparently, I have a stropping OCD

: Im COMPLETELY happy with my small dovo strop and wont be buying another for quite some time BUT when I do it is extremely likely to be a kanayama.

Saying that, I have noooo idea what one I should go for. Like you said the 70 000 is the TOP end of the strop style you have bought (the key difference being the thickness of the leather used - getting thicker with higher numbered strops). But, is it worth forking out the extra $95 for the extra horsehide strop on the 80 000 so you get the finishing, rough horsehide and the linen? The 80 000 also comes with a funky case to keep it in which is probably a godsend for it. I noticed the 90 000 DOESN'T come with a case, as it is 6cm longer than the 80 000 - which is the only difference between the two. So I know if i go for the 3 strop kanayama set up it will be the 80k rather than 90k. But as it is $355 this is gunna be quite a few years in the future - once ive graduated and have a job B)

However, taking all this in mind, it looks like there is another contender on the market and that is the old traditional Bart mentions is another thread which is also teasing me

Suffice to say, the expense of this hobbie is fast catching up with that of my guitaring!

On Jim's website it says that Yoshimasa-san recommends the 30000/40000 for the average user, and the 50000/60000 for the heavy user. I personally wouldn't go for the 3-strop setup, I think that is where the law of diminishing returns kicks you in the balls. I would recommend getting the 30000 at least. If you want thicker the 50000 is the next step up. Having said that, I don't regret getting the 10000 at all, but I will eventually upgrade sometime in the future (like when I get out of school and get a good job). 50000 or 70000. I find the 60cm version to be plenty long enough.

An excellent review, Justin.
When this thread has run its course, would you mind revising all relevant information in one article, to be placed as the very first article in our soon to exist Review Section? It won't be a section of the forum, but a more permanent collection of reviews, into which we'll transfer write-ups that deserve better than to slowly vanish into the swamps of time.

Super review Justin, Now I want one too hahaha

I'll piece it together and pack it into a PDF sometime this week.
R

Justin,
Great review on the Kanayama 10000. This is the storp I use for my personal razors. I have used several other strops, and none compare to the feel or the performance I get from this one. I have no doubt concerning the fact that this strop produces a better finished edge than my other strops.

I have usually gotten only 5 to 6 shaves out of a razor before I needed to use my hard balsa and crox. Using this strop I am now getting around 14 to 15 shaves in before needing the crox.

This strop might not be right for everybody, but I am sure it is right for me.

Yeah Ray, I just really like the feel of this strop also.

On my cowhide Filly I could only get about a week, but I've been going on this one since the 23/24 of December, skipping a day here and there. There are no signs of it letting up yet.

I'd say the 70000 is definitely unnecessary for the average user. I just looked at the picture of it over at SRP, and it is really thick. Probably three times as thick as the 10000. I'm a strop-a-holic so it might just be for me.

I agree that this strop might not be for everyone. Everything aside, it depends on what you prefer. That's something everyone should keep in mind anyway. There doesn't need to be a disclaimer on everything. Reminds me of that one episode of Seinfeld.

Justin, thanks very much for your review. I'm so glad you're happy with your strop.

You've captured many the points that I feel so special about Naomi-san's work, so I thank you for that, too.

In regards to the thickness of the #70000--it's not quite THAT thick. Maybe twice as thick as the #10000, but I haven't compared them that closely. It does have a good, hefty feeling--the leather has "body", if that makes sense.

As for the #80000 and the #90000, yes--they're definite premium items, not at all something I'd recommend for daily use--I know a couple of people who've bought them and are afraid to put blade to leather, because of the price paid. Not for the faint of heart. That being said, I use the #90000 every day, and it's a hell of a thing. I think that the third element on the #80/#90000 offers a bump in smoothness and, I think, blade longevity. Above all, it feels FANTASTIC.

Whether or not it's worth the extra money is the question, of course.

I'll post it in the review chamber as soon as I have set the place up.