Has anybody heard anything of something like this on the picture? The steel looks a little cheap, but maybe it is just an angle? I posted this question on SRP too, but since we're a little more European-based, maybe someone will have some information?

I'm not sure of the question. Kukhri's are made from spring steel, recycled car & truck springs so I am told. My first thought is they liked the name, because I don't think the razor's made in Nepal, or has anything to do with Kukhri knives.

Maybe the steel is SIMILAR to (or identical to) the spring steel used in Kukhris, but even that is a stretch, because there's more than one variety.

An attempt at marketing is the only sensible answer I can think of.

Interesting things you write, mitchshrader. Where do you have this information from?

It struck me that you consistently type "Kukhri" not "Kukri" as it is spelled on the box and stamped on the shank. So maybe this is an evidence of a forgery?

This could be possible, incidentally spring steel is good for making blades.
When Mastro Livi began experimenting with making razor and knives, he also used recycled leaf springs.
Anyway, I think like you that this is an attempt at marketing... A fancy name like many others...

I don't see "Solingen" clearly stamped on the tang... This is interesting for a razor stating German origin on the box.

without knowing anything about the brand... I suspect the razor is good vintage, the steel looks cheap because the photo was taken with flash or a strong light behind the camera or the photo was digitally enhanced.

Though the box looks “new” it is unlikely “set ready for use” (shave-ready by vintage standards) would be printed on the box or “extra hollow ground” etched on the blade if it were manufactured recently. Also the long cut (shoulder-less) is typical of vintage razors and I doubt there are grinders with shaped stones to make that cut widely available today. My guess is it probably NOS or close.

Mmm either that or its a far eastern knock off? the etch is not straight on the blade or the edge has been honed back heavy, and i cant see on the pic if theres any hone wear but I suspect not
Did you buy it Matt or have you been offered it for sale?
if its yours I would hone it up and take it for a ride, best 2 tests of quality I know of.

I just has a look at your SRP thread, The special was probably manufactured by the same makers of the one you are interested in…
It was common for manufacturers to have razors stamped differently to satisfy the demands of independent distributors, the basic form of the razor would be the same, but the tang stamp would be different, incidentally, the decoration (etching) would often be the similar, as in this case “Magnetic Diamond Steel”, and let’s not forget “Full Hollow Ground” or Extra Hollow Ground” or even “Fully Warranted” depending on the popular marketing catch phrase at the time.

For example... I have 2 razors, one with Imperial Razor 20509, stamped on the tang, and the blade etched “The Improved Eagle Razor” an eagle with spears in its talons. I have another razor with the same form, the same etching with same text, but with Loin Brand Yankee Cutlery Co stamped on the tang… who made them? I suspect both were made by the same manufacturer… or at the time it was the “wild-wild-west” when it came to copying decoration.

Manufacturers still do this today… where did I hear that Dovo manufactures FROMM razors?... and bunch of other brands.

With all that said it may still be a modern knock-off... but you will never know for sure until you have it in hand.

IMO it is not an etching, rather just a kind of print on the steel it reflects far too much light for an etching, which is usually matte. I think I'd bet one or two pints on that. Hence my doubts about the quality.

I haven't bought it yet, asked the seller for more pics instead. B)

<edit> There they are! I'm not that sure about the etching anymore, :blink: maybe it's some paint inside it? Not Solingen for sure, no more marks on another side of the shank.

What do you think, would you yourselves go for it?

How much are they asking Matt?

Mmm ok, why not watch it and if you can get it for a low price take a chance? the worst you could end up with is a razor to practice honing stropping etc??

is it on like a polish egay or something?

Yeah, exactly. Sometimes you can get real treats outta here, like this Solingen for less than 10 €:

Or such one, 17 € with shipping (a wooden box and some barber's hone included!):

Waiting for both to arrive :thumbup:

Awesome!
now if only I could read Polish hahaha

The etching has gold-wash in it (or gold filling), that's why the etch reflects light, it's similar to the gold embossing on some vintage razor box... in all my collection I have only one Solingen razor with gold filled etching... I will post pics later.

Aha... here it is.
The etching has gold wash with blue and red enamel coloring.
The name on the tang is Rapid Shaver... but don't ask me whets written on the blade.
Its part of a 7 day set, this one is Wednesday... wish i had the rest of the week. 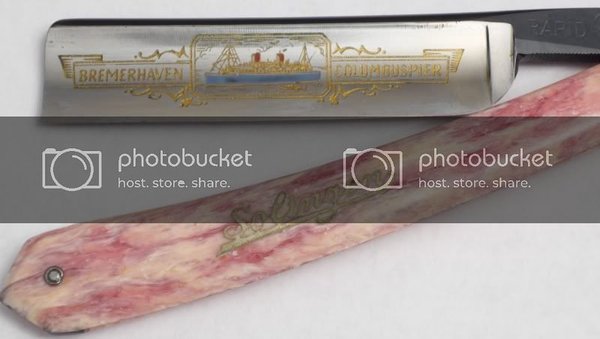 and the writing on the blade refers to places Bremerhaven port in germany and columbus jetty in god only knows where I think?

You may have gotten lucky. I had a suspicion it *might* have been Pakistani.