Recently someone on another forum posted pics of a new razor that was so strange looking that I just had to try it. the fact that it was cheap only made the decision easier. The head looked like a cross between a Blackbird and a Pils and had a triangle shaped handle. This particular model was the Delta and the company was Mag T. To my knowledge, this is their first (and only) razor. It was so strange looking that one wonders what the Alpha, Beta, and Gamma models looked like. The Mag in the name referred to the use of magnets in the head. The T I'm not sure of.

My Mag T Delta arrived today and although I already had another razor loaded with a blade for tonight's shave, the Delta took priority. The promo pics are just do not do this razor any justice as it is way more massive and stranger than the pics show. The razor is very simple and has just two parts, a cap and the rest of the razor. There are two magnets, one in the cap and the other on the base, and the blade guides are on the base. Just line up the blade to the blade guides and let go of the blade and the magnet will pull the blade securely in place. For the cap, you just need to make sure the end pieces are aligned with the edge of the base and the magnets will pull the cap securely to the base. 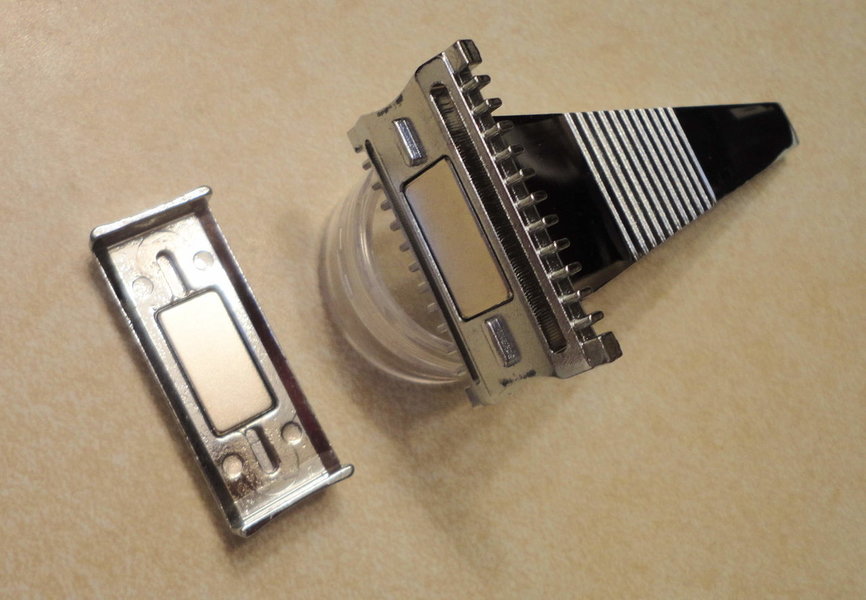 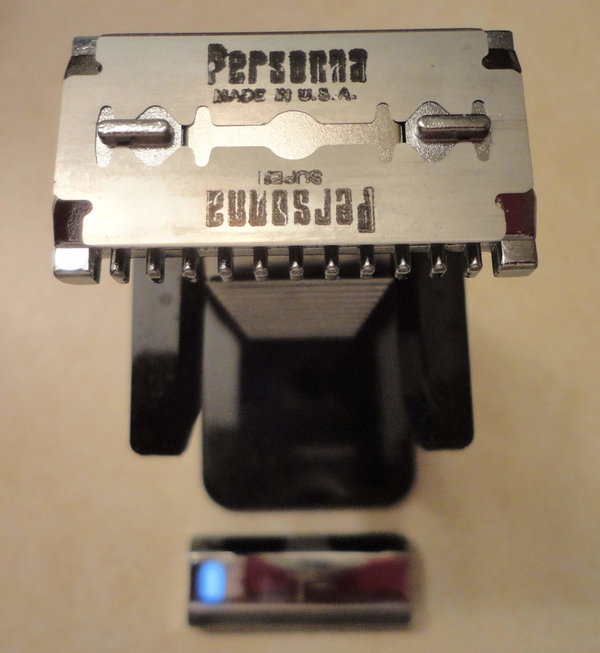 The design of the razor is one where the blade is clamped relatively flat and the blade edge does stick out almost straight similar to the Pils or Ikon SBS. This has never been my favorite design for a safety razor, especially when the area beneath the blade and the guard has a large gap. Supposedly this was to accommodate up to 30 days growth of beard (according to the web site). 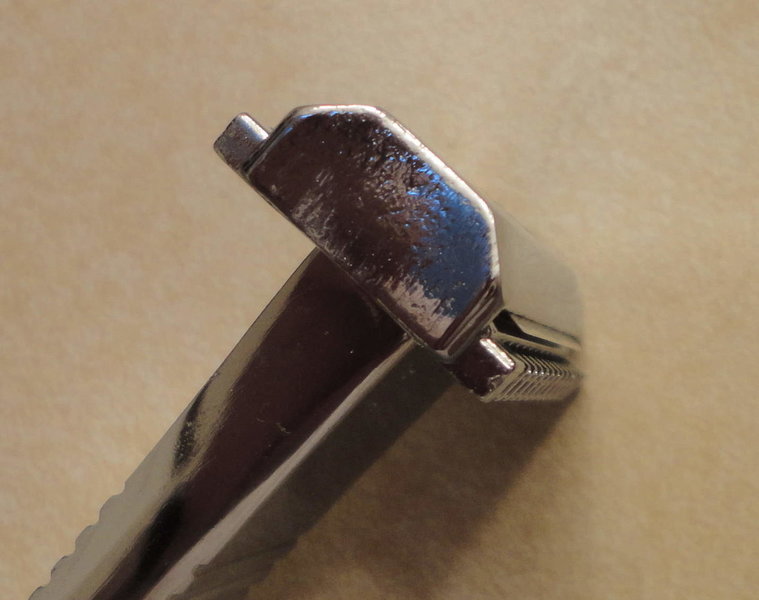 An interesting design feature is that the base has lather slots in addition to a very chunky open comb. I reserved judgement of this feature until I finished my first shave.

Before starting, I had to test out a couple of different grips since the handle was so unusual and the razor itself was very heavy. I found that the most useful and comfortable grips was to put the thumb on one side where there are grooves on the handle, and the index finger on the other side lightly supported by the middle and ring fingers for WTG. I also found that laying the thumb on one side of the handle (the sides that taper) and the index and middle finger on the other side worked well for ATG. On their web site they showed that you could vary the angle for an aggressive or mild stroke, but I quickly found out that the aggressive angle produced a rough shave, and keeping the angle of the cap against your face and the comb barely touching your face produced a very comfortable and efficient shave. I was surprised in the end where I got a very comfortable two pass plus minimal touch up BBS. One thing I need to practice on is that many times when I shave ATG under my chin, I reverse the position of the razor where the handle is on top and the razor head is below it. I found that this move was not quite intuitive with this razor. Still, for the price, this is a razor that is worth a couple more tires to get a feel for.

Looks like it would chatter, no blade tension with a flat blade, and no blade support under the blade anywhere near the edge. I'll pass.

Thank you for the interesting review! One of the most original razors that is available nowadays.

Second shave with the Delta tonight. After a relatively long learning curve last night, tonight I just picked up the Delta and went straight to the proper angle using the grips I felt comfortable with the night before. I was surprised how second nature it felt. This time, the shave was very comfortable from start to finish and I got away with a two pass plus minimal touch up BBS. One thing I noticed from the shave last night was that this was a pretty deep shave, where I did not feel much stubble the next day. To answer @TobyC comment, thre is no blade chatter, possibly because the magnets are very strong and prevent any blade movement when assembled. Also, if you follow the angle that the cap gives you, the edge of the blade is already at an angle that prevents chatter.

Tonight I took some pics of the grips that I found useful in controlling the razor. I found that controlling a razor with so massive a head and the heavy weight, choking the grip closer to the head and holding the razor on the tapered sides controlled the head very well: 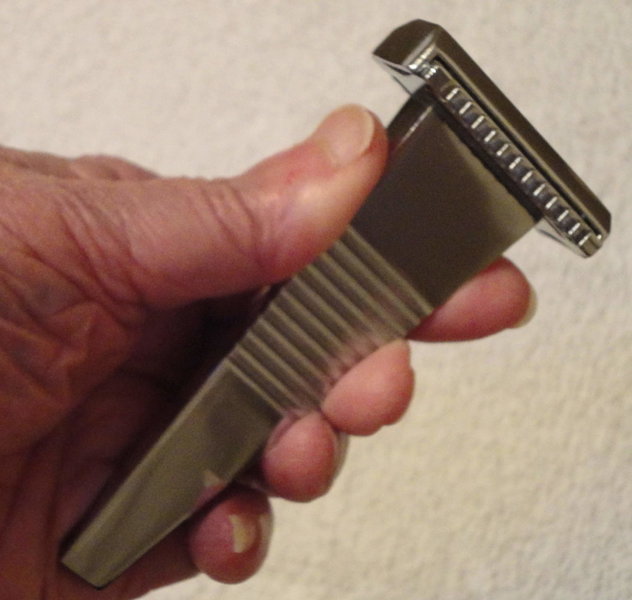 Using the same grip, but holding the head toward the bottom did well going ATG under the chin and jaw areas. 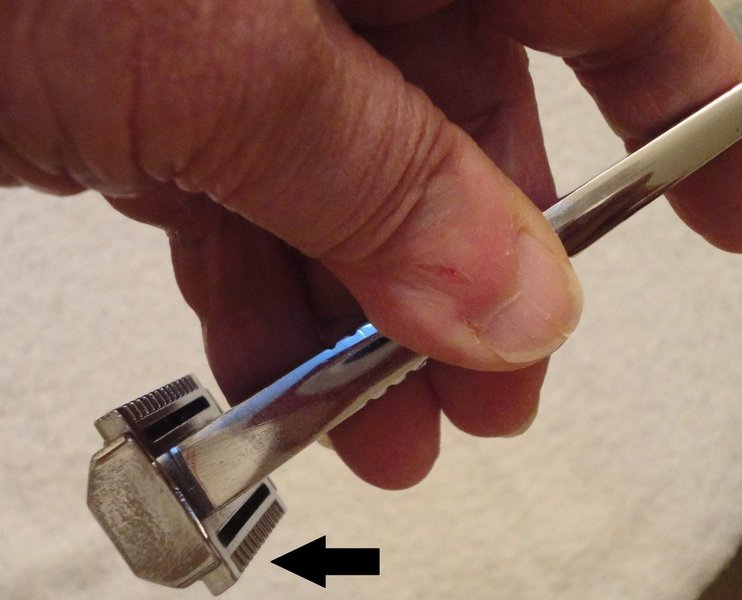 A couple of time, I used the original suggested grip that the razor was designed for, however I also choked it further up to give more control to the head. 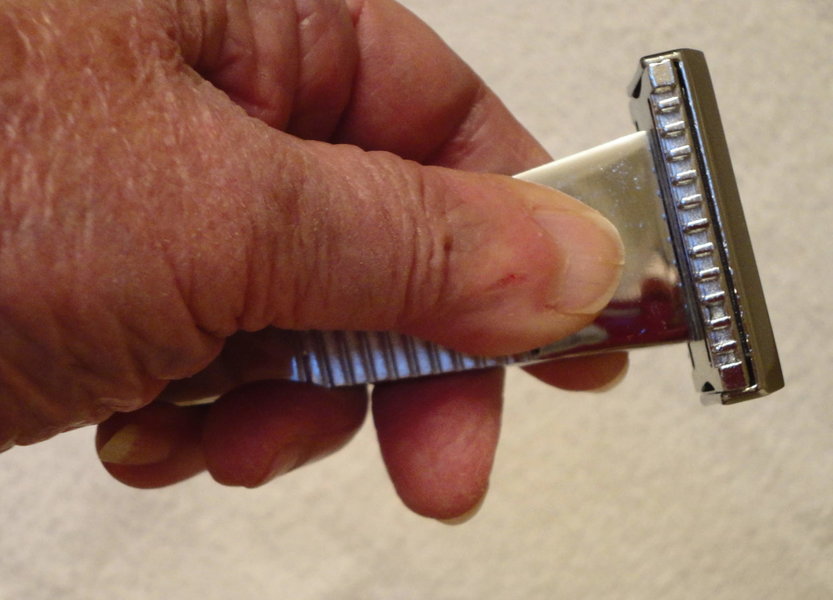 Overall, an interesting shaver that does require attention in the beginning to find a comfortable grip, but one that would reward you later with a great shave.

Is one a magnet and one a steel plate, or both magnets pos to neg? If only one magnet, and it in the base, the blade would stay on the base I would think.

There are two magnets + and - on the inside of the cap and on the base. Because this is a zinc alloy cast, magnets are needed on both pieces. I'm not sure if making the cap out of a more magnetic iron will solve the problem or create new problems by having other razor blades and paper clips sticking to the outside of the cap.

Doesn't it do that now?

If the magnet in the cap was replaced by a piece of steel, (either an appropriate SS alloy or plated carbon to prevent rust) the magnet in the base would still strongly attract to the cap, (clamping the blade in the process) but the cap wouldn't attract anything.

First shave tonight with the Mag-T Alpha razor. First of al, the razor shares the same head as the original Delta which means it is held together with large magnets that makes it easy to load the blade and secure the cap. It also means that the head is quite massive and heavy. Unlike the Delta with the triangle shaped handle, the Alpha has a rather long and relatively thick round handle. This works well with the massive head and there was absolutely no problem in controlling the razor properly. Fit and finish was very good and the chrome plating thick. The handle itself was made of teak wood, which gave it a nice look. 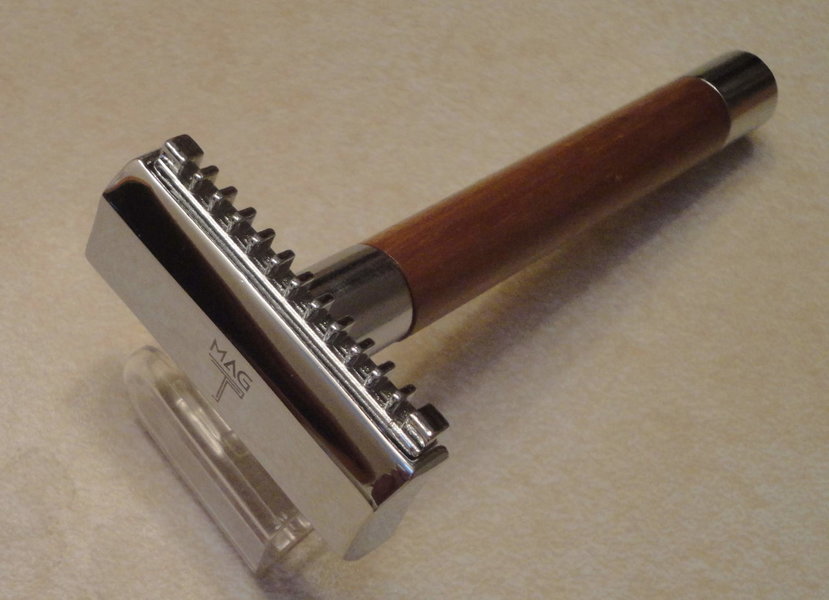 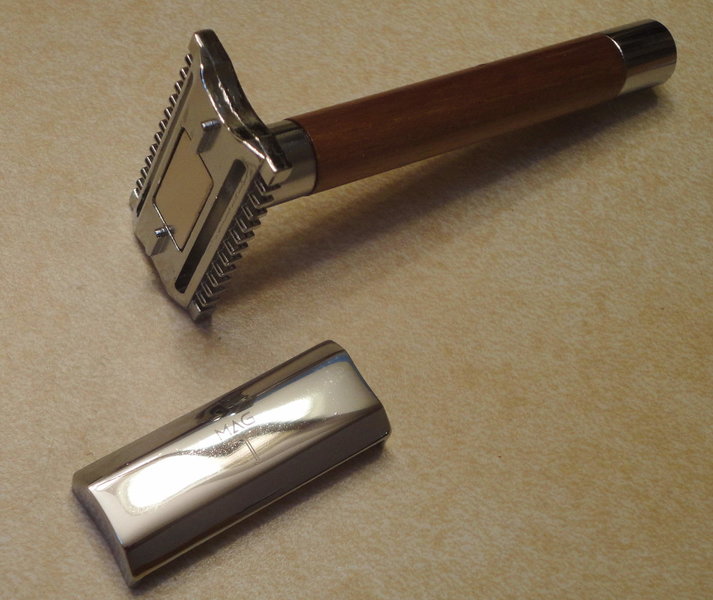 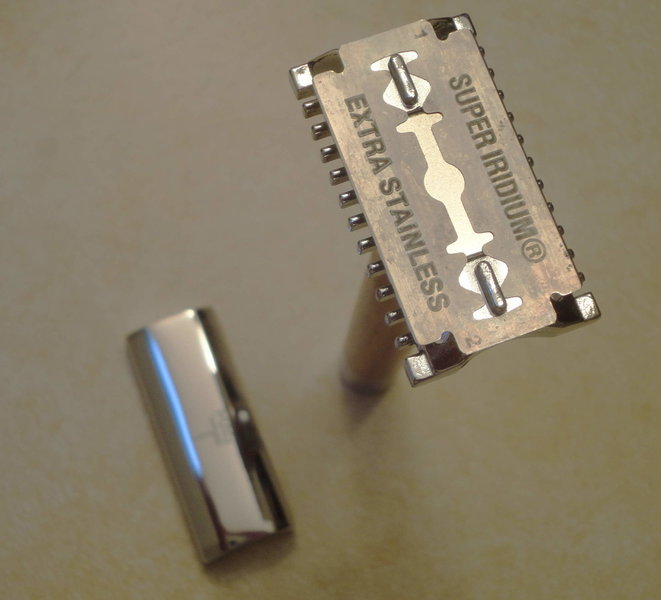 For tonight's shave I loaded the Alpha with a Wizamet blade that had about 15 shaves on it. Whenever testing a new razor, I always use a blade almost ready to be tossed just so the characteristics of the razor will show. The Wizamet blade was chosen tonight because I found that it had a strange characteristic of slowly not shaving close as it wears out, but not show any tugging or pulling like most blades as they wear out.

For the WTG pass, I used the angle that the cap suggested and had a very close and smooth pass. I again used the same angle with my ATG pass with similar results. After the ATG pass, I found that my worn out Wizamet could still produce a very close two pass BBS using the Alpha. If it wasn't for the size and weight of the razor, I would classify it as one of my ghost razors where you have to check to see if you loaded a blade in it while shaving because the shave itself is so smooth and efficient. If you never bought the Mag-T Delta because yo thought it was too weird or if you bought one, liked the shave, but don't use it anymore because it was too hard to grip properly, then it is time look at the Alpha.
You must log in or register to reply here.
Share:
Facebook Twitter Reddit Pinterest Tumblr WhatsApp Email Share Link
Menu
Log in
Register
Install the app
Top