In a conversation with "The King" he mentioned that he has tried/owned 40+ Mama Bears soaps.
Maybe he (and everyone who feels like it) would like to share his opinions on these soaps.
The ones he liked most or the least, heavy or very light as far as scent is concerned.
I'm sure it would help others in choosing from the many she has on offer.

Been a long time since I ordered one of her soaps but that might change in the near future.
Practice for a Long Long Time and All Is Coming
R

I do have a few MB soaps in my collection
I like them a lot. Great soap, easy to lather. Smells good.

certainly a soap to consider

SU-Patron
Very nice soap brand. The quality of the lather is good. There is wide variety of pleasant scents.

And they have shave sticks too...

I have a few , and had a few more.
One of the first Mama Bear soaps i owned was the Grapefruit Ice , verry nice , but after a few weeks the smell was gone.
So , my trust too , and i sold them all.
Now , i have 5 Mama Bear soaps , and they keep there smell , so , maybe in the future i have to look around.
At the moment i can say , good investment.

Mama Bears is a Glycerine soap that is easy to whip up into a full, stable and protective lather.
The caring properties of glycerine soaps like the Mama Bears always appeal to me, the skin always feels good after shaving.

Keep in mind that the soap requires a little more water when Lathering up than the average soap.

In general, MB soaps have a stronger smell (with a few exceptions) and you have to love them.

The advantage is that the odour palette is much more extensive than most soap makers. In the portfolio you will find the strangest scents you can think of such as roasted Bacon, After Eight chocolate (Andy's Mint) and the smell of a campfire.

The Menthol soaps are refreshing but not heavy cooling. The cooling content is that between the Proraso white and green.
The advantage of glycerine soaps is that they are very easy to melt in the microwave.
Don't do this for too long, at most 20 seconds, because the soap shouldn't boil, so it quickly loses its scent.

If you want to make the soaps a little cooler grind one or two grams of menthol crystals and stir them through the soap after it has been removed from the microwave.

So far I have had more than 40 MB soaps in my stock and at the moment there are 21 more so you will understand that MB is one of my favorite soap brands.

Here are the soaps I have or have had.

To give up trust in a brand after one lightly scented soap is very quickly Jaap.

MB knows some soaps that are lightly scented usually are her soaps with essential oils such as the Lime and therefore also the Grapefruit.

Sometimes it is mentioned with a soap that the smell is light but not with all soaps and that is a shortcoming.

But in general her soaps are strong in smell.

Hans, you're forgetting the Iceberg Ice, I still enjoy that one.
I did get a sample of the Awakenings, which was even better!

SU-Patron
Agree with te previous.
To me the most appealing scents are:
- Cabin in the Woods
- Oak Leaves & Acorns
- Bonsai
- Hydrogen
- Elements of Bamboo

You're right when merging both lists, unfortunately this soap was not included.
Last edited: Jun 24, 2020

SU-Patron
And yes, they have very special scents. This was on Facebook today: 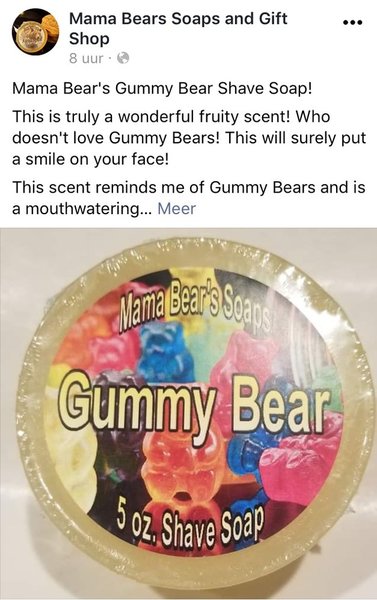 That one goes on my list for sure!
Practice for a Long Long Time and All Is Coming

We keep defying each other.

It already makes me a little nauseous when I think about soaping my face with a sweet candy smell.

Mama bear...
Good soap... good lather and is nurturing. I've had a lot of them, hopes have gone up during use. Some I gave away.
Regarding menthol, they're pleasant, although not as refreshing as some others. Her soaps based on current perfumes are often 1 on 1. And very tasty. E.g. (Dublin tweet. /Gentleman /aqua di gio.

My all time favorite is Wood
But also the Aromatic Pipe Tobacco Kentucky Bourbon and Morning Cup, Black Coffee... dragon blood are tasty