This French noble soap needs a special place. In German forums it somehow is not assassed so well, was sometimes referred to as the most overrated soap and is not found so often in the RdT threads. at least not as often as she deserves in my opinion.

Savonnerie Martin de Candre is based in Fontevraud-Abbey and has been producing soaps since 1974, including also shaving soaps. I can not say much about the story. It is said that two sisters took over the recipes from an old soap boiler and founded this company. These shaving soaps are in many respects very high reputation, others do not seem to win much from her. The latter often justified this with the high price, which they did not see justified. But more on that later.

First of all, it has a simple, clean recipe. You can see that not much is needed to make a topsoap. The result has completely convinced me. We are not dealing here with the "over the top soap" par excellence, but with one who moves in the top range. Slick properties and protection are the finest and the care is on a good, for me ideal level, because the skin is a dry velvety and not "overgroomed" creamed. Great.

The foaming behavior is legendary with this soap. It is thought that it turns from looking to a creamy, fat foam. I can only think of the Saponificio Varesino, which is equally good at it. As with that one does not come up with the idea even at the MdC, to somehow miss tallow. Likewise, a small amount of material is enough to get enough foam for three or four passes. This soap is very productive. For me, the consumption is probably less than a gram.

The fragrance palette is quite manageable. With the unscented one there are six different directions that can be obtained. I know four of them.

Original:
The original and initially exclusive scent direction. A typical French herbal mixture dominated by lavender and rosemary. But it has many other nuances that make this fragrance very pleasant. I like lavender anyway, this version is very natural, enhanced by more delicious herbs, and medium perfumed.

Fougere:
This scent blew me away from the start and it has stayed that way. Because of this fougere, I could become a fougere junkie. It's one of the most beautiful scent I've smelled from a soap. A green, ferny fragrance with a subtle touch of wood. not too much grass, but enough to make it slightly dry, with a little sweetness. I want sit down in it. Also moderately scented, here I would almost wish it would be a little bit stronger.

Vetyver:
A dry, slightly bitter masculine Vetyver. Grass, dark woods, a little bit of fruit. Also very successful for my nose. If I shaved in the evening, I would have ordered this pot right away. In the morning, however, Vetyver has almost no chance with me, so I have omitted.

Rose:
Personally disappointed me. looks not natural on me and way too sweet. Since I like the English interpretations almost all prefer. Even those who I do not think so successful.

Agrumes:
That should be the Citrus version. I do not know.

The MdC is available in a heavy, very valuable glass container. A joy for the eyes and hands in comparison to the more or less common plastic or aluminum tins. It's fun to hold the heavy and tastefully stuck thing in your hand. Furthermore, there are at least the Original and Fougere in an open, completely overcrowded woodbowl, as well as in other rounds and square wooden vessels. Also in other glass crucibles (Le Cannelé, Le Beurrier, Le Domino), the two varieties are also offered. The other varieties are more likely to run under lim. Edition. In general, MdC attaches great importance to attractive and valuable packaging and design of the containers. I think that's very nice.

Lastly, I would like to comment briefly on the price, because this point has often caused the excitement of the mind. In the meantime, we have become accustomed to higher-priced soaps, but then it should also be in the right proportion. On the one hand, I mean that a soap, if worth it, is cheap in the truest sense of the word. On the other hand, the MdC is also without the personal attitude to consider a high price ultimately not as expensive as it seems at first glance. Depending on the scent direction, the glass pots are between 40 and 45 Euros. If one converts this to 100g (the glass jars contain 200g), then the soap is slightly above 20, - / 100g in the range of Klar soaps or SV. There are also 50g containers, which are in proportion but significantly more expensive. The reviews of many users, which are consistent with my previous experience, show that the MdC is very rich and so in fact probably cheaper than half of all US Artisans, where you often can not save with material to create a good lather. Consuming the contents of this glass jar will probably require four to five tins from my favorite overseas artisans.

Regardless, I met a fantastic soap in the MdC. Or rather newly met. Years ago, I once had a sample that I could not stand. Now I do not feel any difficulties. The MdC has worked in the highest favor with me, and has for me the quality of a soap for the island. There are a few others, but it is the highest award from my side. 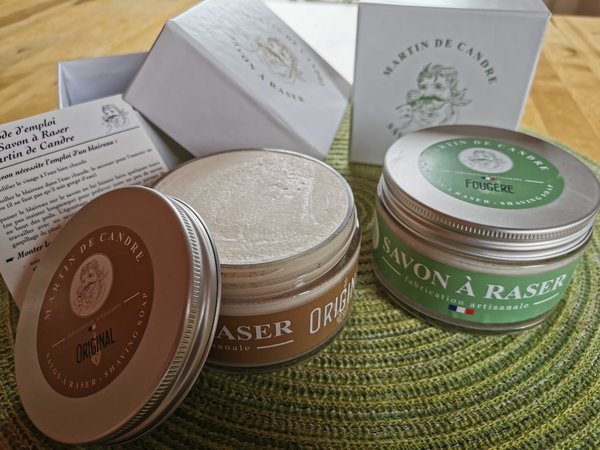 SU-Patron Gold
@maranatha Beautifully written report by the MDC in which he is exposed on all sides.

I also think that you mention something very important, and that is the fact that nowadays there are more shaving soaps available from the top segment, which are also more expensive to buy in terms of price.

I once had the MDC Fougere and was not impressed at the time because the smell was pretty weak and I don't like the smell of it.

At a purchase the Agrumes bought and this smell can appeal to me very much. A somewhat "smoky" citrus scent that remains deliciously foamed and present.

The quality of the foam is, as you say, excellent and very little soap is needed to create a full body of foam.

When I last visited a shaving shop the Original was smelled with its rosemary and lavender scent and decided to buy them again.

I deliberately write "again" because I once gave a full pot to my young friend because I didn't like the smell very much.

Oh well they say that as you get older your taste changes and here is the proof.

And now I can say that I really like the two MDC soaps and whether they are worth their money will remain the well-known YMMV for everyone, but for me that is what they are anyway.

I couldn't have said it better myself. I totally agree with the 2 posts above.

SU-Patron
Thanks for this information. Very usefull for a potential buyer!

The citrus had a nice smell bit dehydraties my skin

The unscented has fage smell of anice. For me the choice when Before sports
H

I have the Vetiver and the Roses variant. The first is a smoky, herbal, grassy soap and the latter is a refined floral fresh smell that expenses itself when lathered. I rate my Saponificio Varesino a little higher because they have the most delicate, most sophisticated fragrance but a MdC is a real musthave too

Here are the original and the agrumes. That's not so special, but my jars are crystal clear and happily not glass but plastic. The difference is nearly not noticeable, but try scratching the bottom. I'm happy with plastic tubs in the bathroom. Don't know witch too buy next, roses or fougère.