First shave with the new Muhle R41 stainless steel edition. I have to admit that it is a very nice looking razor and highly polished so that it is almost as shiny as the original R41with the chrome plating. Two things stood out when examining the razor. First was that the head looked almost exactly the same as the original, and the handle looked the same as the Grande (including that cross pattern that did nothing for grip), and second was that the build was very good. I guess if this version was to celebrate 10 years of the R41, one would have expected something more, like maybe a birch handle or a cap etched with the windmill.

Another thing was the price of the razor (okay, that's three things that stood out). I got my razor from Gift&Care for almost $130. My Birch Rocca cost me $100 a couple of months ago, and you can get a R41 Grande and four extra R41 zamak heads for the same price as the stainless steel version. I begin to wonder if getting a stainless steel razor is worth that price difference. 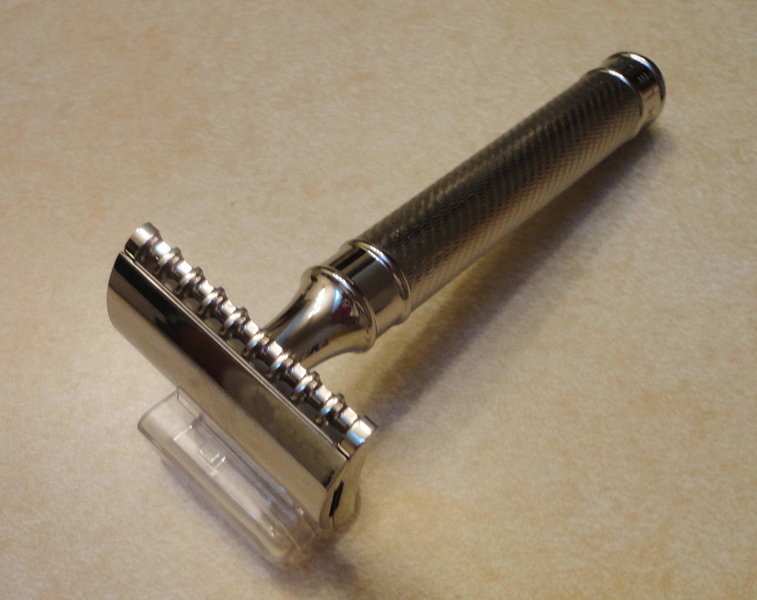 So first, before the shave, I have to say that I got my first R41 in 2013, just as the 2013 heads were coming out. Many folks in all the years since have talked about the R41 taking sections of your face off and being a slayer of the toughest shavers, etc AND how the 2011 head was worse than that. From my first shave all the way to tonight's shave, I have always found the R41 to be a very efficient and comfortable shaver. My overall impression of tonight's shave is that it was very close to and possibly identical to my zamak head R41. The weight was heavier than I wanted, but then I never bought a Grande and so don't know if that is what the Grande feels like. Maybe later on, I will pull out my R41 and compare the shaves between the two.