So I finally touched a razor to a coticule. The Gold Bug was whimpering in its sleep so I fetched it for a good cuddle, and the 4x2 coticule woke up too.

Isn't that how it always goes?

I hadn't guessed that the few strokes on my arkansas bench stone were sufficient to set a proper bevel; it was just enough to prove the arkansas COULD do it. So, in the interests of doing it right, instead of twice, I got the 8000 DMT out and lapped the coticule side of the 4x2 slightly, enough to transfer a generous slurry to the DMT.

Then I gave the razor 20 strokes per side, dead flat with two fingers on the spine, alternating sides with each stroke. I'm not using an X pattern where I don't have to, going very slowly and making sure each stroke is consistent, straight down the hone. As the slurry ran off the hone I added a drop or two of diluted detergent to keep it 'floating', till I'd done the 20 per side.

Then a washup, everything, and started in on the 4x2 with half strokes on Very diluted detergent, half the usual concentration (5% detergent), alternating strokes for 20 per side. Another full washup, dry off, and moving to a light strop on the latigo, just to smooth the bevel slightly.

finished. I don't NEED to strop between honing sessions, it's practice cause my stropping sucks. I'm going to hone it several sessions worth, concentrating on absolutely flat and dead slow, without slurry, and making sure everything is cleaned between sessions. It ought to go much slower than using slurry and that's helpful, as is seeing how the edge makes contact with the stone. I'm trying for the same blade movement each time I begin and end a stroke, to learn the stroke motion that doesn't ding razors OR stones.

This endeavor is to teach me how to feel what I'm seeing and hearing, and the only 'win' is to avoid damage to razor & hone..shaving isn't even on the agenda.

So a few minutes, and a junk razor, and an ideosyncratic approach to the problem..but I figure if I work slow enough I may be able to postpone the execution for MONTHS!

One word of advise: please adopt an X-stroke for all your razor sharpening.
Here's explained why:
Please, Log in or Register to view URLs content!

It's hard to tell if it was very poor honing or an attempt to restore usefulness, but the edge is 1+mm worn at the point on this razor, ground back to the original line over about the first 20mm. It might well have had a small chip OR just been badly honed by an ox for a year.

I'm not yet building an edge, that can wait on the big pretty dedicated hone. I'm softening the transition from the original bladeline to the point, making it a 'smile' that is an even arc from heel to point. I can't hurt this one, and might succeed in helping it, but it's familiarizing myself with how fast it hones and listening and watching the stroke while feeling it, that I'm after. I'm familiar with the x stroke and am stropping in an X pattern, but I'll not be using the X stroke until sometime later in the reshaping. I may well use a bbw to grind with, depending on how slow it goes, but running it squarely down the DMT isn't something I'd do to an undamaged razor. This one ain't hurt by it, trust me, and I won't be doing it forever.

Is it possible to upload images directly, or is there another way that works? Being able to point at pictures would help me ask better questions.

Keep at it my friend, a razor is quite a different animal from other blade.

Unlike other forums we do not currently have upload facility in the forum except for the marketplace (but that may change soon).
In the mean time if you have an account at any one of the many photo sharing sites on the internet (such as Photo-Bucket) you may upload your photos to the photo-sharing site and link them in your post.

First make sure the photo is about 800 pixels wide.
Then upload to the photo sharing site and open the full size photo on screen.
Right click on the photo and select "Copy Image Location".
Return to this site and in your post, click once on the Green "Picture Frame" icon, this will place your courser between two "[ img ] [ /img ]" then press Ctrl-V to paste the link between them.

That's it, your photo will be loaded from the photo sharing site and displayed in your post.
Hope this helps
M

Well, impatience triumphs after all, I tested the 8x3 out tonight, and it's quite the rock. A very nice slurry, with the new combo slurry stone, and I did a hundred laps trying very hard to keep smooth consistency with intermittent success. I had trouble staying smooth on the 'away' stroke compared to the 'pull' stroke, and the bluidy slurry is slippery! In all I'm as glad it's over, and i didn't manage to chip the razor so it's a win. But a nice rock indeed, and the first time I've used the coticule. Slightly 'bitey', a good feeling of smooth drag as it glides over the slurry, you can feel the edge quite easily. The slurry seems to dry fast, taking more water frequently and another 'rub up' twice in a hundred strokes. Very slow strokes. I only learned a teensy fraction and it's mostly i've got a long way to go before this is automatic. The rock i've been saving back is up to it, and that's nice. Way out of my class at present, I'll need to grow skill in order to really appreciate it.

Now about this OTHER rock. The 8x2 has turquoise colored ?inclusions? that are confined to about the first 4-5mm thickness of the coticule. I have no clue what they are, but forced to guess I might venture fluorite crystals. They're big enough to be noticeable and don't seem to affect honing with slurry, but add a little drag to honing with water. It won't make this hone more suitable for razors to know what the odd bits are, but I'm limiting it to kitchen knives anyway. I havn't managed to get a picture of them but will try.

I think I'm going to try for a first straight razor shave on April 1. It'd be poetic.

Now about the Japanese rocks. , I'm learning one teensy fact at a time. I have two stones that were sold to me as 'karasu' but they don't show the markings as they should. Dark olive green with black lines in them, and the larger is cut across the grain of the layers, so the sharpening surface isn't one layer flat, but many layers and a cross section of them.

I think this stone, whatever it's properly called, and the smaller one similar, were cut from trimmings, due to the odd cut. I think they were salvaged from leftovers of something WORTH salvaging, and I don't know if 'karasu' has any connection to it at all. I suppose I could post them in the marketplace and request appraisal assistance.

You know I don't know how many more posts I can read of your's about all of your rocks and not see pictures....
M

It's a bit difficult to put them up here. I'd post a link to another forum where they're showing but don't think that's polite (until I know different).

Identifying a few of them would be greatly appreciated, or any info past what I've gleaned and guessed. I do have more rocks lately than I'd expected and probably ought to sell something to soothe my conscience.

Sometime or another, that is.

On Coticule.be, you're allowed to link to as many other websites and forums as you like (as long as you don't link to illegal activities). You're also allowed to include picture links. Here's an
Please, Log in or Register to view URLs content!
how to do that.

The link doesn't apparently work, I get a nice copy of the HTML code instead of pictures. I'll try again.


well, if you copy/paste as the URL you can see them, but it takes you to the album, and that's not the improvement I tried for..

If there's one feature I'd pay for without arguement, it'd be the opportunity to show off rocks & strops & razors & such, current and prospective future, concurrently with discussion of same. Having the opportunity to do so in the Marketplace emphasizes how desireable that feature is. Whereas I'm a tightwad and skinflint on both sides of my ancestry, and me offering to pay for something, you may rest assurred that I see the value as greater than the price. Therein lies the seed of a paid membership.

If you add the image tags either end of the web address where the pic is: 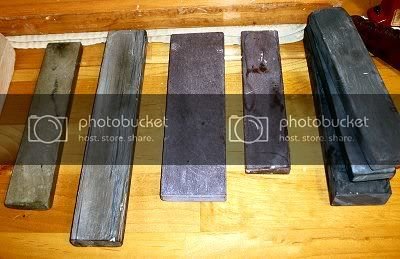 what you posted was the address of your photobucket album, this could have been made into a link by adding link tabs: simply type or paste http:// etc etc that you want to link to: highlight it and click the globe looking button above.

or even easier if you go on your photobucket and get up the pic you want, it shows you the img code, just copy that and post it here and you will have a pic.

Ralfson, I edited Mitch' post so one of his pictures showed up. He could go in there and see how it was done, but he edited it right back to the original version instead.

Coticule.be doesn't do privileges for people who can afford to pay. We're communists here. Free lunch for all!!

Being relatively lucky to be born a few dozens of km to the west from the former CCCP border (well, I could easily be born those few dozens of km more to the east) thus experiencing the "lighter version" of the communism the hard way, I feel oblidged remind you that the free lunch in question has to be confiscated before it can be given away.
You must log in or register to reply here.
Share:
Facebook Twitter Reddit Pinterest Tumblr WhatsApp Email Share Link
Menu
Log in
Register
Install the app
Top