Last night I reported on the Occam's Feather AC razors. Tonight I will report on the Occam's DE Razor. Unlike the other Occam's razors, this is just called the Occam's Safety Razor (I guess the sons' names are reserved for the Feather AC versions). The razor is made of stainless steel, however, don't expect them to be at the finish level of the Homelike Start.

The one of the caps is your regular domed cap, but the other has a thin ridge line in the middle of the cap, which is supposed to assist new shavers in finding the proper angle. The three base plates included one that looks like a direct clone of the EJ/M 89, another which seem to be an Open Comb which is closed on the bottom (similar to the safety bar side of the vintage Emir Dual Comb), and a comb that makes you wonder what they had in mind because it seems to be similar to the Open Comb, but with the teeth bent inwards and a slightly thicker bar. 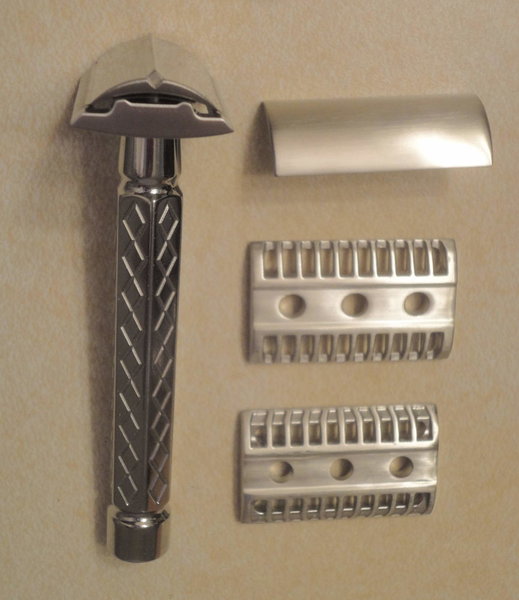 I temporarily used my Diamondback handle because I am still waiting for my replacement Diamondback cap to arrive (it has not been sent yet after two weeks).

First shave was with the clone EJ89 base plate and the ridged cap. First thing I noticed was that the ridge was not a good design because it was very hard to locate it against your face. It was not something similar to a pent cap (like the WCS Lithe) or even a beveled cap like the older Merkur 37. Once you found the ridge and touched it to your face, the angle was not one that allowed the guard to touch your face without applying pressure. I guess you could get a very gentle shave, but not cut anything.

After that experiment, I went back to my usual angle and found the shave to be decent. It was on the mild side and not as efficient, but this is what the characteristics of the EJ89 was and so no surprises. I eventually ended up with a two pass plus an extra XTG pass under my jaw line and chin. Not quite as efficient as the shave with the Enoch razor the night before, but a decent one.

Tomorrow I will continue with the ridged cap but will switch to the closed Open Comb base plate.

Maybe the son whose turn it was has a beard
Cheers!
Richard

Tonight's shave was with the ridged cap and the closed open comb plate.When I again tried to rest the ridge against my face, this time it worked better with the comb. I still did not fully make contact with the ridge, however the angle was a lot closer. Straying from that angle and using my regular angle produced a very rough shave and so I immediately rode the cap more. The shave was much more efficient than last night's shave, and almost as comfortable. I got away with a two pass plus minimal touch up BBS.

Tomorrow I will use the ridged cap with the strange base plate.

Final shave using the ridged cap, this time with the strange base plate. Like last night, I think the ridged cap was designed for the closed open comb base plate and for this strange base plate as I was able to rest the ridge on my face and still have the base touch my face enough to get a comfortable shave. the shave with this plate was as strange as the plate looked. It was very comfortable and was very efficient at clearing lather from my face, however it was not as efficient as either two base plates in getting a close shave. It did get me a very comfortable two pass DFS, however more stretching and buffing did not produce a BBS. In looking closely at the design of the guard, I can see where they were probably trying to get the effect of a scalloped guard, or one with upward facing teeth, but it did not work as well as either.

I have decided to end my review of the Occam's Safety Razor with this plate as I don't see how a non ridged dome cap will produce different results. Overall, an interesting razor, however, probably one for the Frankenrazor parts kit and not for a regular part of my rotation.
You must log in or register to reply here.
Share:
Facebook Twitter Reddit Pinterest Tumblr WhatsApp Email Share Link
Menu
Log in
Register
Install the app
Top