One razor that has been a unicorn for many collectors here in the USA is the Olaf Rasmussen Surgical Prep. Before all of you folks on the other side of the pond start scratching their heads thinking that they never heard of a razor produced in Norway, the Olaf Rasmussen company was based in Port Clinton, Ohio. They were granted a patent for this particular razor design in 1948 and unconfirmed sources say they produced razors until 1951. To my knowledge, they never made a commercial razor for the public to buy, and the only examples I saw were those made for the medical profession, similar to the Weck Surgical Prep. Yesterday I received what I believe to be a lesser known version of the Olaf Rasmussen razor that was design for prison and institutional use because it required a key to change the blade, very similar to the more famous Gillette Psycho Tech. Previous to a week ago, I was not aware that such a version existed. I have since found some mention of them, but not much.

When the razor arrived, I trued using my smallest hex nut drivers and all were too large for the opening. 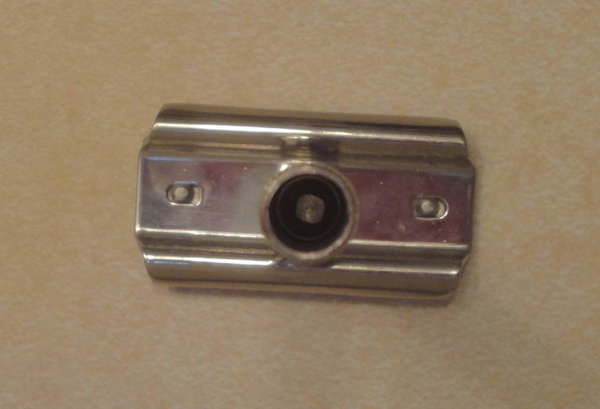 I noticed that the head inside was square, which meant that even if I found a hex nut driver that fit the hole, I would not be able to loosen the head. I went to my local hardware store and looked for anything that might fit and even asked a couple of helpful folks there. We all drew a blank and on my way out, I noticed an area where they sold brass tubing and found a 1/4 inch square tubing that might work. When I got home and unwapped the tubing, it fit perfectly and I was able to release the head. 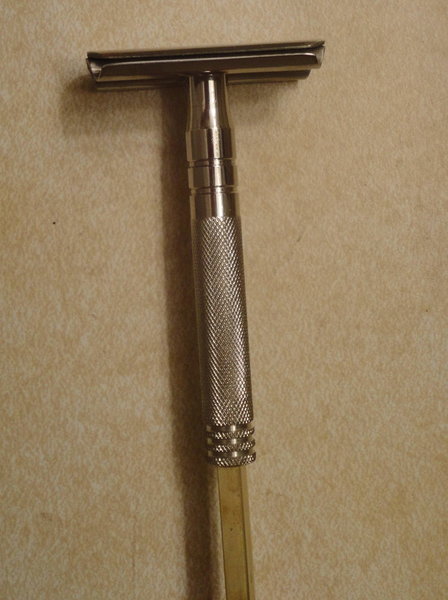 Once the head came off, I noticed a couple of things. First of all, this was a three piece design which differed from the Gillette Psycho Tech which had the base plate attached to the handle. Secondly, there was no markings anywhere on the inside of the head (or anywhere else on the razor) to indicate that this was an Olaf Rasmussen razor. 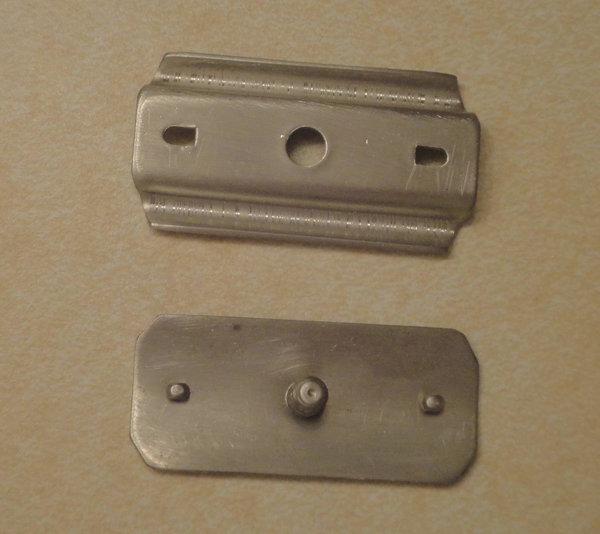 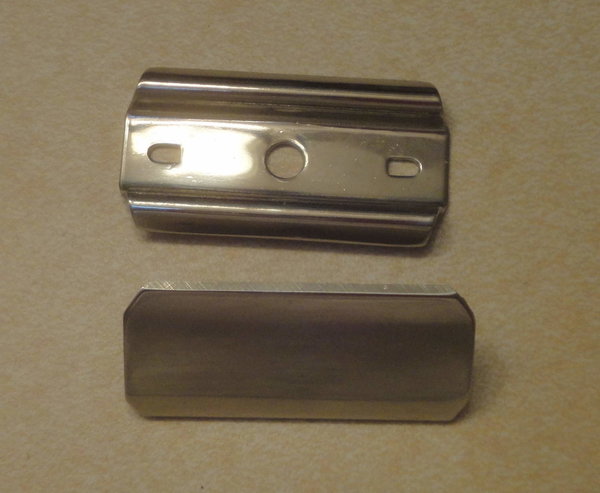 Thirdly, and most importantly, any other handle will work on this razor head, and the original handle will tighten the head. It seems that the key was there just to secure the head after tightening it. There is a small nub at the bottom of the screw post that the nut in the handle locks in place so the razor cannot be disassembled. 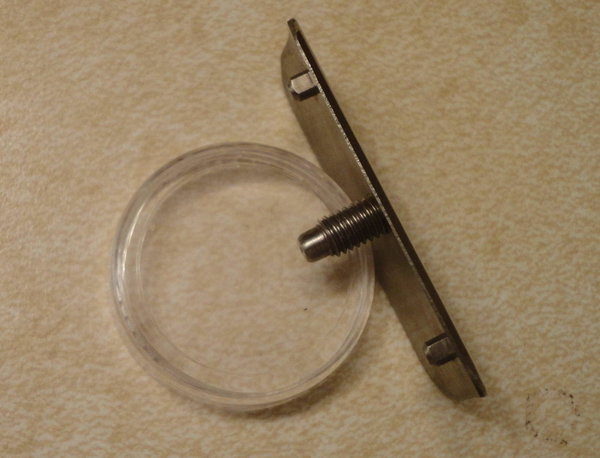 First shave will be tonight.

Well, this afternoon prior to my shave, I was busy making a key for my razor, even though the head would remain on snug without a key. Never know when I would be running a prison some day.

The key looks very much like one a prisoner would make using parts in the Machine Shop, but it does work. 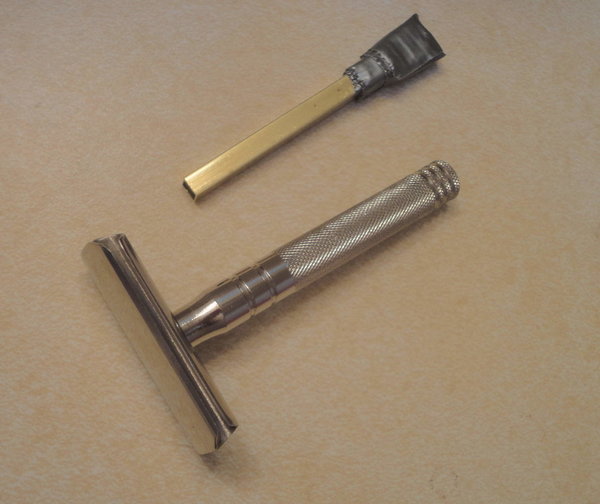 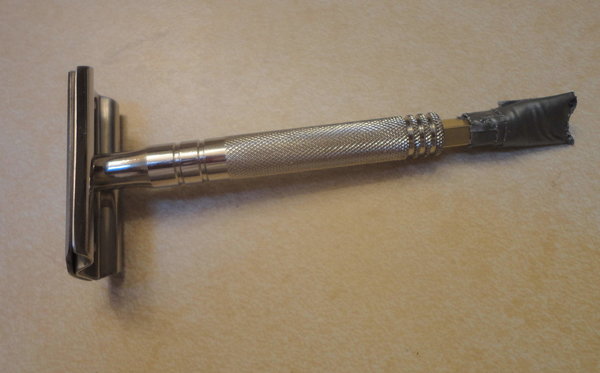 Doing further research, I was able to find a pic of an NOS one which was clearly identified as an Olaf Rasmussen Institutional Razor: 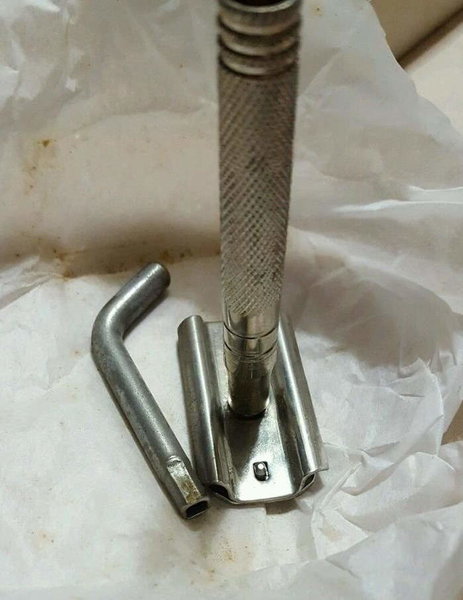 The original key looks just as industrial as the razor. Nothing fancy like the Gillette.

So first shave was tonight. I did not use the lock to prevent me from removing my blade, but just tightened the head to see if I could shave that way without a problem. the razor head stayed in place for most of my shave. I thought that the razor shaved a little on the mild side until I lathered up for my second pass and found that most of my whiskers were gone. As expected, the lack of lather holes did mean that I had to rinse the head more often. In the end I had a two pass near BBS. This razor will definitely be used more and often.

I am not sure yet if I would commit a serious crime just to go to prison so I could use this razor. Maybe I will just lock the head after done.

So where did it go to?
Cheers!
Richard

Seems that with the short screw post, the head can loosen especially when rinsing a lot more. I guess the other reason for locking the head is so that prisoners cannot steal a razor and use it to dig a tunnel under their bed in their cell.

Interesting that the cap has that same short screw with the unthreaded tip. I thought that mine was designed that way so the security bolt in the handle could clamp on to something. Then again, maybe one cap saves manufacturing cost, but then why two different base plate designs?

Still, a great shaving razor no matter what configuration.

The Bottom Plate looks the same shape and size, so I'm guessing they they used the same dies to stamp both plates. They just started with one with holes versus one without.
The plate is less than 1mm in thickness so the dies would not have to be too heavy duty.

@gvw755 - Have you tried another handle on yours?

Moderator
SU-Patron Gold
Here's the prisonrazor with the original key: 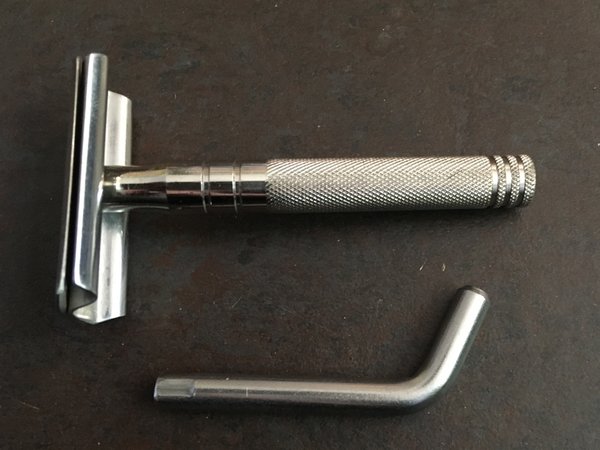 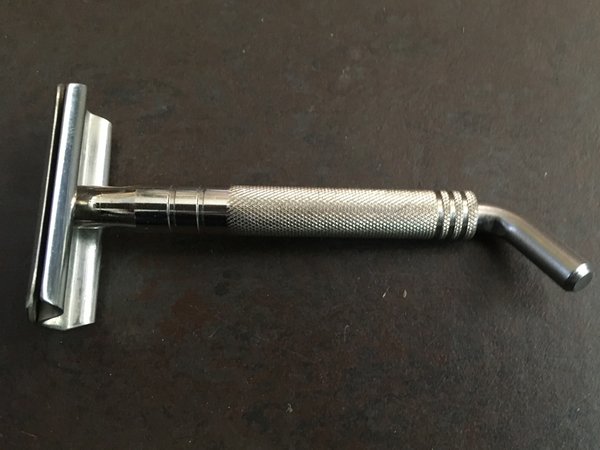 Yes, and it works very well, however the short screw sometimes makes the head loosen up while shaving. Then again, the original handle will also stay in place without tightening the security bolt also needing to make sure the head stays secure between passes and rinsing.

The part that I really found odd with this razor was that it was made strictly for mass volume institutional use (hospitals, prisons, and mental institutions) and was never released for the home market.

Moderator
SU-Patron Gold
Had a few shaves with mine (pictured in post 9 above) and must say: I'm delighted! Very mild yet very effective, absolutely marvelous razor!
Cheers!
Richard