(Not sure where this fits best, so putting it here)

One way to make a profit selling razors in a cut throat market is lowering manufacturing costs. A way to cut cost of manufacture is to have the fewest possible parts, and the fewest possible steps. The easy way to achieve this is to design the razor to be easy to manufacture from the start, rather than trying to modify it later. You can’t get much simpler than one part and – as far as I can estimate – three steps. And that is how simple Charles Ballreich idea for a one piece single edge razor was. It is clear from the patent that ease of manufacture was a a primary objective. To quote from the introduction: 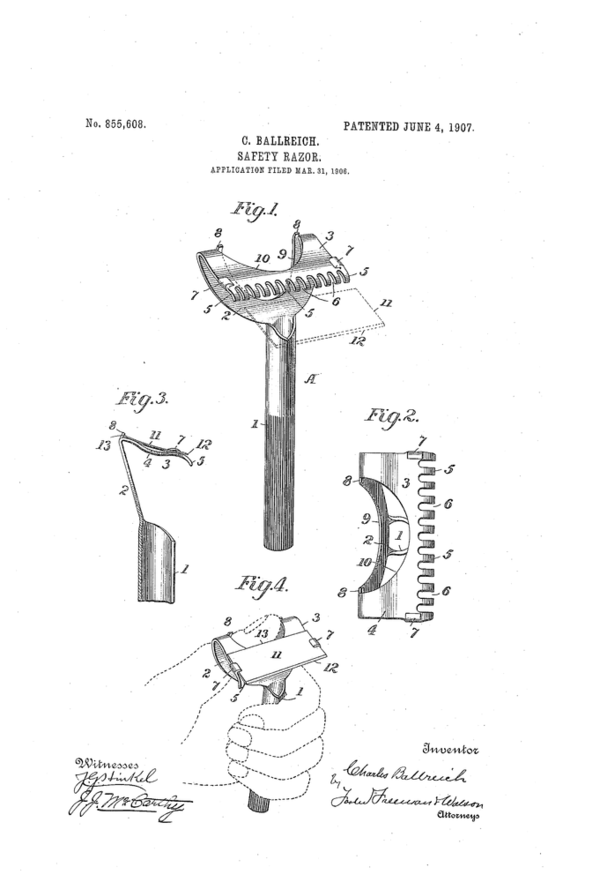 Patent drawing from US patent 855 608​
Folded from a single piece of sheet metal, the razor consists of a head and handle. The head have a pair of folded tabs (7) to hold the blade in place. The handle is made by folding part of the blank into a tube. As far as I can tell from the drawing, the needed steps for manufacture would be as follows:
One could design a more complex form and press that did the two last steps in one operation. That would mean a larger cost to set up manufacture, and would likely not be worth it.

Mr Charles Ballreich were relying on the springiness of the blade to keep it secured under the clamping lugs. As can be seen from figure 3, the blade (11) is ever so slightly bent when in the razor. This also meant that in order to remove the blade, the shaver could simply push it out with his thumb. This is shown in figure 4. Inserting it would been a slightly more delicate operation… the patent suggest using two fingers and pulling backwards.

With some minor modifications I can see this razor being made today, although the marked is likely small. The razor could be set up to use de-spined GEMblades, or even spined GEM blades if the clamping lugs (7) were made to fit into the cutouts on either side of the blade. I can also see it being easily altered to accept standard double edged blades, although in that case I would not recommend removing the blade with your thumb.

*) Which I found interesting because the patent was cited by OneBlade in their patents.

Moderator
Moved to this subform

Sound advice!
An’ I don’t need no safety razor, neither.