Yes, it is another disposable lather device,* and like
Please, Log in or Register to view URLs content!
this one also comes courtesy of the Kaiserlich und Königlich Patentamt** in Austria. Patented in 1901, Herr Eugen Körzinger and Herr Otto Nettlich came up with a single use, hygienic, and cheap way to lather the beard.

The device itself is quite simple, as can be seen in the drawing. A piece of sponge^ is cut in the proper shape, infused with soap, and then dried. The sponge is then mounted in a piece of wood, or in a tinny clamp. The whole device should then be packed in a suitable way to ensure it is clean and sterile.

To use it, the shaver needs only to wet the bristles and then – I assume – proceed to face-lather. The inventors points out that antiseptic agents can be added to the soap during manufacture to make it even more hygienic.

And to finish of, the sponge, now devoid of soap and lather, can be used to wipe the face after shaving… before it’s thrown away. 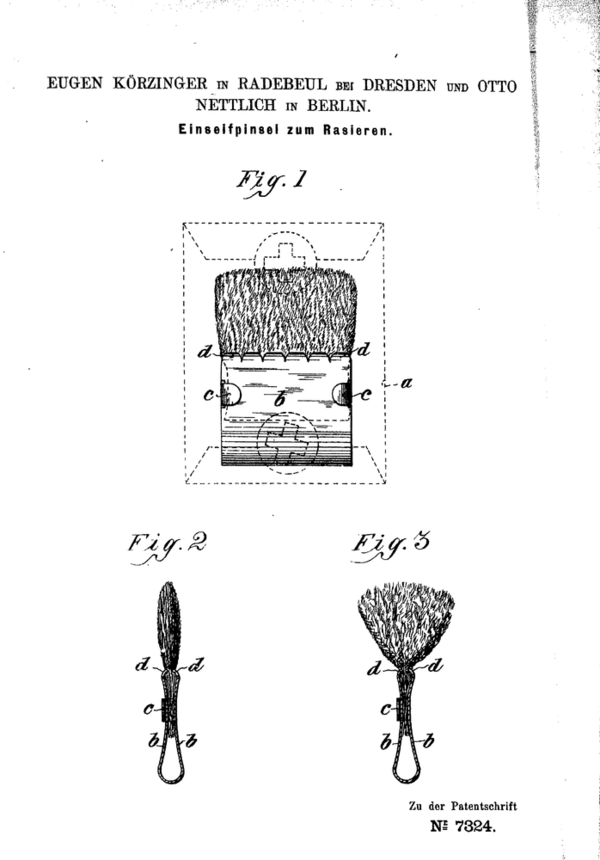 The patent drawing from K.u.K. patent #7324, filed in March 1901​
Referring to the drawing, figure 1 shows the soaped and dried brush in a sanitary paper envelope. Figure 2 shows the still dry brush/sponge from the side. And finally figure 3 shows the same view, but after the sponge/brush have been rehydrated. All the drawings shows the form of the invention where the sponge is mounted in a sheet metal clamp, and not in the slotted piece of wood the text suggests.

I do not know if Herr Eugen Körzinger and Herr Otto Nettlich ever got their invention into production. I can however see a variation of the invention find a use today. It could be used for travel, for soap samples, and by the barbershops I more and more of.

Footnotes:
* Or, as the original patent says; Einseifpinsel zum Rasieren.
** K.u.K. is a common term used in the Austro-Hungarian nations in the early part of the 20th century. It means Imperial and Royal, and refers to the Empire of Austria and the Kingdom of Hungary.
^ The German word used is “Schwamm”, which google translate insists is sponge… which is an somewhat odd material for a shaving brush, but my German is so rusty I cannot think of a better word.
You must log in or register to reply here.
Share:
Facebook Twitter Reddit Pinterest Tumblr WhatsApp Email Share Link
Menu
Log in
Register
Install the app
Top